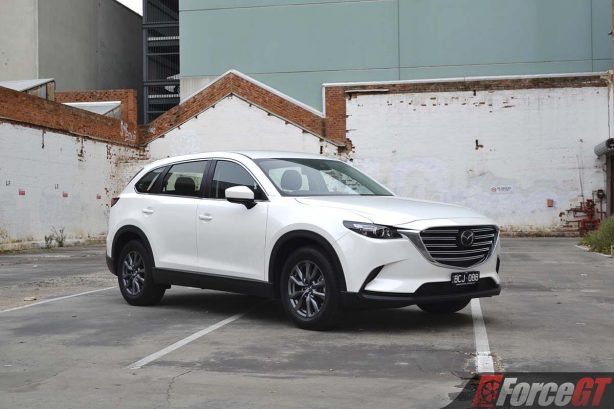 The Mazda CX-9 has always been one of our favourites here at ForceGT. And since its launch in 2016, Mazda has continuously refined the successful large seven-seater SUV to ensure its appeal with buyers.

But now into its fourth year on sale, the CX-9 is entering dangerous territory as newer models start to descend onto its arena.

However, if our time spent with the entry-level CX-9 Sport FWD is any indication, Mazda should have nothing to worry about, as the SUV still brings a smile to your face every time you and your passengers hop into their seats.

To sweeten the deal even more, 2020 brings a raft of advanced dynamics technology, more safety equipment, a further boost in comfort and functionality and minor styling tweaks to keep the already good-looking SUV fresh. 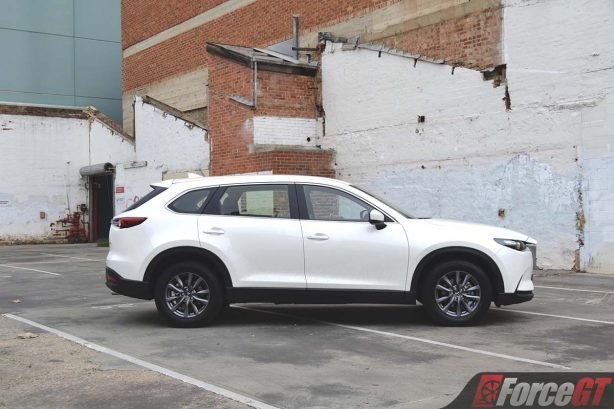 Like before, Mazda’s flagship comes in four variants starting with the front-wheel drive CX-9 Sport tested here. Priced from $44,990 plus on-road costs, it’s the most affordable grade in the line-up but that doesn’t mean you’re getting the poverty pack.

However, it does miss out on the leather-appointed seats of more expensive variants but the seat materials are of high quality and easy to clean – a useful feature for family with small children.

All-wheel drive is offered on all variants for an extra $4,000. 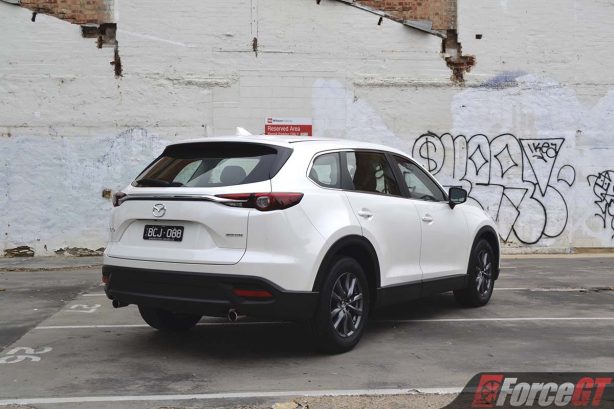 The entire CX-9 range gains Mazda’s G-Vectoring Control Plus (GVC Plus) as standard. Building on the existing GVC, GVC Plus uses brake control to help the big 7-seater bus reduce understeer coming out of a turn.

We are glad to report the system works and provides the CX-9 with improved agility and cornering ability (more on that later).

While not available on our front-wheel drive tester, all-wheel drive models get the latest iteration of Mazda’s Off-Road Traction Assist, which makes driving easier on undulating roads and prevent tyre slip.

The Autonomous Emergency Braking System is now also able to detect pedestrians at night to improve safety, while the Azami’s adaptive LED headlights have been improved to offer greater visibility without dazzling oncoming traffic.

Useful features added to the range include an Auto-Hold function, which holds the vehicle stopped, even if you’ve taken your foot off the brake pedal, and the addition of USB ports to the third-row, which should delight its often children occupants.

Access to the third-row has also been made easier with the implementation of a switch that tilts the second-row seat forward on the side of the seat cushion where it’s easily accessible by children.

If you’ve noticed the Azami LE was missing from the price section above, that’s because the model has been dropped to simplify the range. As a result, the Azami has picked up a few goodies from the departed LE such as Nappa leather in either Walnut Brown or Pure White.

Other more trivial updates include a new brilliant dark 20-inch wheel finish on the upper-spec models, bright 18-inch finish on the lower end of the spectrum, new key fob design and updated vehicle badging, both of which were first introduced on the new Mazda3. 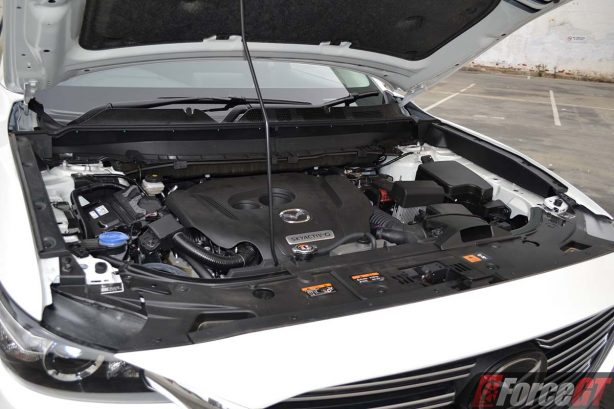 The CX-9 continues to be powered by the excellent 2.5-litre turbocharged four-cylinder petrol engine that made its debut with the model in 2016. Producing a healthy 170kW of power and 420Nm of torque, it’s so good that Mazda has now introduced the engine on its wider range of models, including the CX-5 and Mazda6.

Requiring only the most affordable 91RON fuel, the engine is punchy from the get go with just a small hint of initial lag off the line and delivering its full whack of meaty torque from just 2,000rpm. Like us, drivers will also delight in the accompanying sweet sound track when it’s given the boot.

While its six-speed auto might sound old school these days when a seven- or eight-speed is the norm, it’s the perfect match to the turbo mill, extracting useful kilowatts after kilowatts at just the right moment and in syrupy smoothness.

Like the lightings that come with thunderstorms, wheel spin off the line is almost inevitable if you are slightly more aggressive with the throttle due to the chubby amount of torque that is directed solely at the front wheels. Happily however, torque steer is well contained with hardly any tugging at the steering wheel near full throttle.

All CX-9s are equipped with Mazda’s efficiency enhancing i-Stop (Mazda’s engine auto start/stop) and i-Eloop systems; the latter recovers energy during braking and stores it as electricity to help power the heating, lights and other functions. 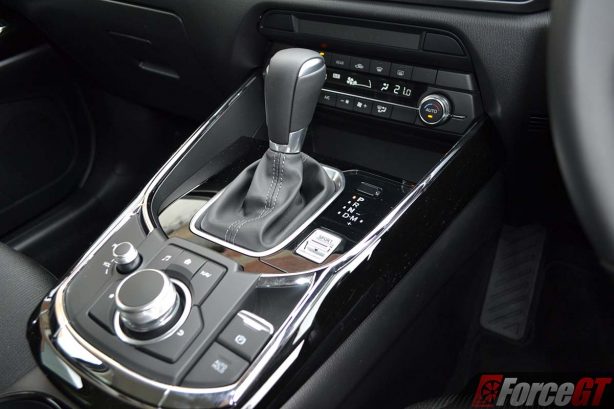 Just as good as before.

Mazda has always known a thing or two about vehicle dynamics and handling and we are glad to report the 2020 CX-9 actually drives a little better than what we remember it to, thanks to the fancy new GVC Plus highlighted above.

Around the corners, its handling belies its size, tackling corners with the agility of a car much lighter than its 1,878kg kerb weight might suggests. Body roll is well managed and its steering is relatively sharp for a large SUV, with decent feel through your fingertips.

There’s also no danger of your passengers getting car sick should you get carried away with the throttle, as the CX-9 feels stable and in-control at most speeds.

Around town, the CX-9 is comfortable and soaks up most road imperfection effectively. We still relish at its interior quietness that wowed us back in 2016 and brought a new era in cabin refinement for Mazda. Its adaptive cruise control is also one of the better ones at keeping speed in check without being overly nervous at vehicles turning off ahead.

The CX-9’s auto high-beam works well on country roads in illuminating the path ahead and then diligently dropping back to low-beam when the camera detects a car in front or in the opposite direction. 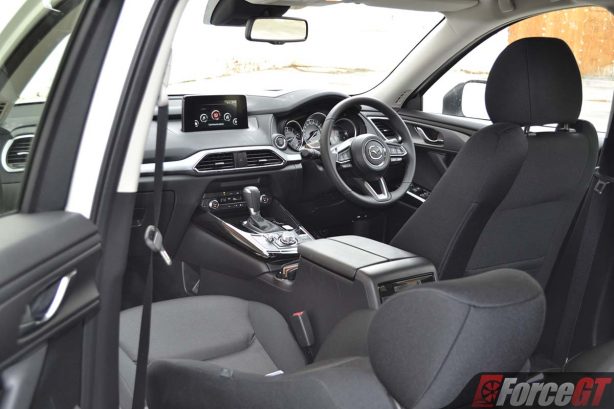 While the CX-9’s interior is starting to show its age compared to the brand’s newer offerings like the Mazda3 and CX-30, it’s still an enjoyably relaxing place to be.

All cabin materials, from the cloth seat upholstery and door trims to the plastics on all contact points, feel positively high quality and well made.

The cabin feels airy and spacious, too, with wide comfortable seats in most positions and plenty of headroom. All seats (except for the second-row middle seat) get their own bottle/cup holders and door pockets, and there is a large storage bin under the front central armrest.

We like the front and rear auto up/down power windows, along with the auto dimming rear view mirror. There are two 12-volt power outlets including one in the cargo area, along with two USB ports for smartphones or tablets. 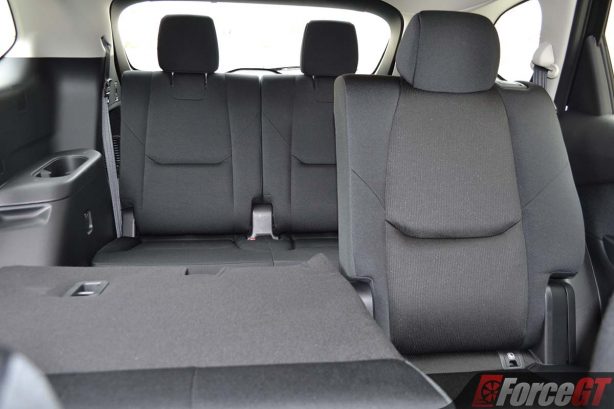 The second-row seats slides fore and aft to apportion legroom between it and the third-row, while its backrest angle is adjustable, too. Unlike some 7-seaters, the third-row of seats can accommodate adults relatively comfortably, rather than just children.

As most CX-9’s will be used as a family bus, there are two Isofix child seat mounting points in the second-row

Further aback, the CX-9 comes with 810 litres in cargo capacity when the third-row of seats are not in used. When required to transport humans, cargo volume drops to 230 litres.

Despite its age, the Mazda CX-9 remains an excellent large SUV that is comfortable for its occupants, yet rewarding for the driver.

While most of the 2020 updates are niceties confined to the higher spec variants, the addition of GVC Plus across the entire range is worth noting and brings worthwhile improvement to the car’s already accomplished handling.

The easy access button on the second-row is also a child-friendly addition that makes access to the third-row much easier for all, adding to the CX-9 usability and cementing its spot as one of the best large SUV on the market, still.