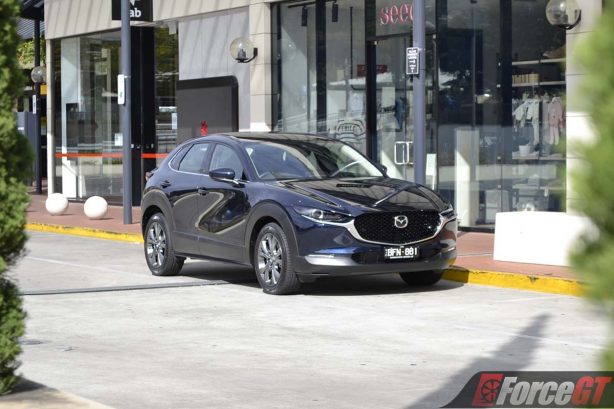 Is the Mazda CX-3 too small, but the CX-5 too big? Now, Mazda has created a model that precisely plugs that gap, and it’s called the CX-30.

Like most European premium carmakers, Mazda is increasingly apt at filling in niches within its line up, which started with the CX-5-based, 7-seat CX-8.

Based on the rather excellent, current-generation Mazda3, the CX-30 comes a smaller and lower dimension compared to the CX-5, all wrapped in a pleasingly stylish package that we have come to expect from Mazda that won’t compromise too much on utility.

If the CX-5 goes to the battlefield with the Toyota RAV4, Hyundai Tucson and so-on, the CX-30 rivals must be the recently launched Volkswagen T-Roc, as well as possibly the Toyota C-HR, Honda HR-V and Hyundai Kona. 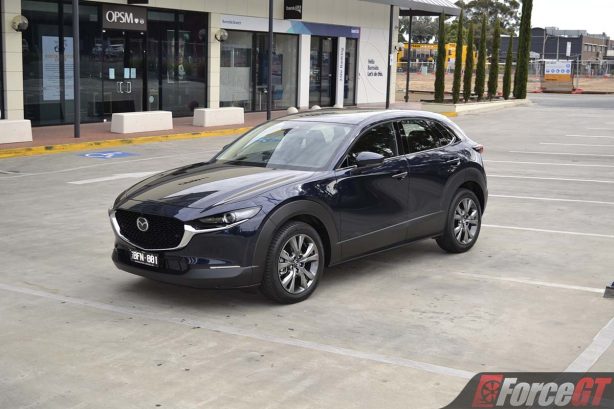 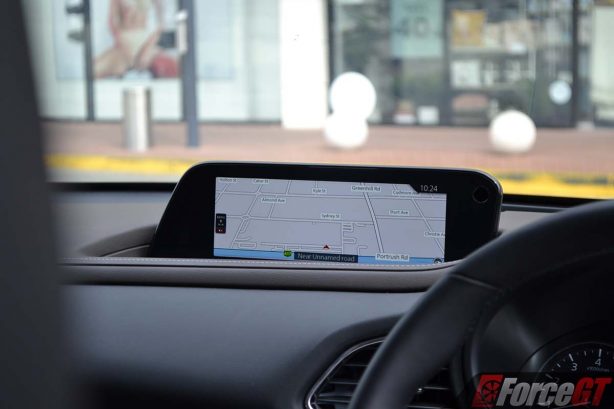 If mod cons are a priority, then you might want to skip the $31,490 Evolve and step straight up to the $34,990 Touring grade (all before on-road costs), which scores keyless entry, exterior mirror with auto dimming function (driver’s) and reverse tilt down (passenger), front parking sensors, 10-way power adjustment including lumbar support on the driver’s seat with 2-position memory, leather appointed seats and vanity mirrors illumination on top of the above. 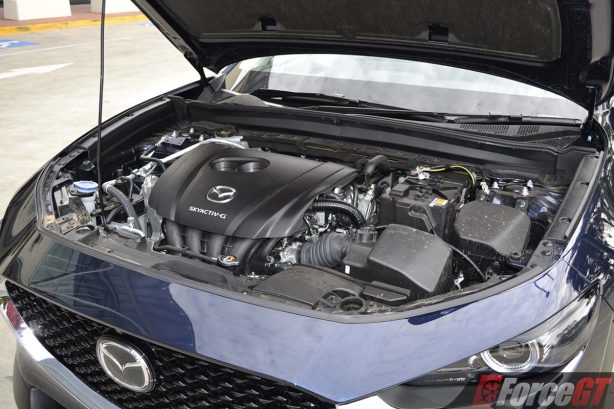 Meanwhile, the G25s are motivated by the bigger Skyactiv-G naturally aspirated 2.5-litre four-cylinder petrol engine which features similar technologies, along with cylinder deactivation. It produces 139kW at 6,000rpm and 252Nm at 4,000rpm.

Both powerplants are connected with a 6-speed automatic transmission as standard, and with the exception of the G20 Pure, comes equipped with paddle shifters as standard.

All-wheel drive is available on the Touring and Astina, while the Pure and Evolve comes standard with front-wheel drive only with all-wheel drive not offered even as an option. 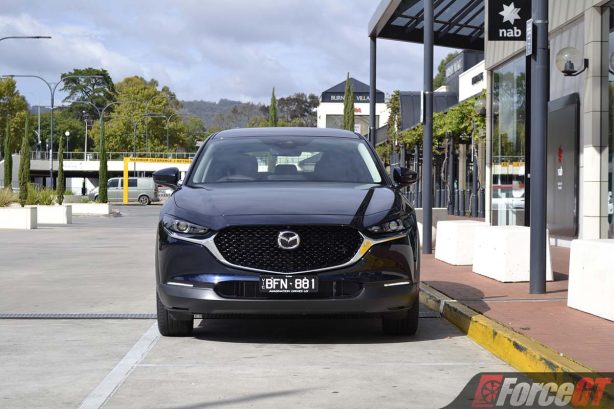 It’s a good-looking car, the CX-30. Mazda says the designers set out for an overall length of 4,400mm or less in their quest to retain the brand’s hallmark handling reputation, as well as to make it easier to manoeuvre around town, where most of them will live.

The resulting 4,395mm length and 1,540mm width makes it around 70mm shorter and 100mm taller than the Mazda3 hatch on which it is based.

You could almost describe Mazda’s latest SUV as a coupe-crossover with its aggressively raked rear windscreen. There are even hints of Porsche Macan in its rear quarter but the overall design is crisp, sporty and classy.

The front sports a family resemblance with the latest generation of Mazda products, with slender headlights sitting on the chrome extensions from the front grille. 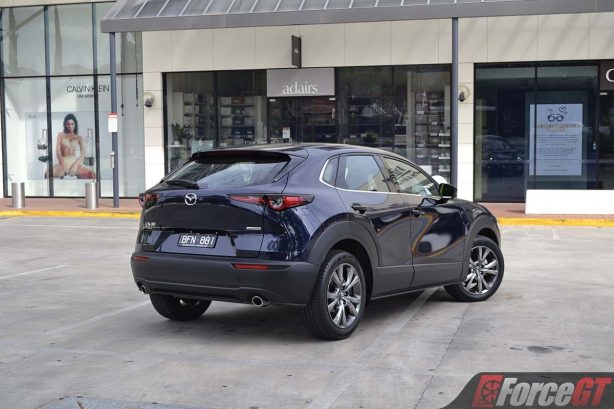 The LED indicators are located down low on the front bumper and glow like an incandescent bulb of old instead of the crisp on/off light that is characteristic of LEDs. This is even replicated in the instrument cluster. Now, that’s attention to detail!

Along the sides, the thick side cladding provides the car with a chunkier look for that tough SUV look, while the rear is also unmistakably Mazda.

It’s certainly one of the best-looking SUVs in its class and on the road. 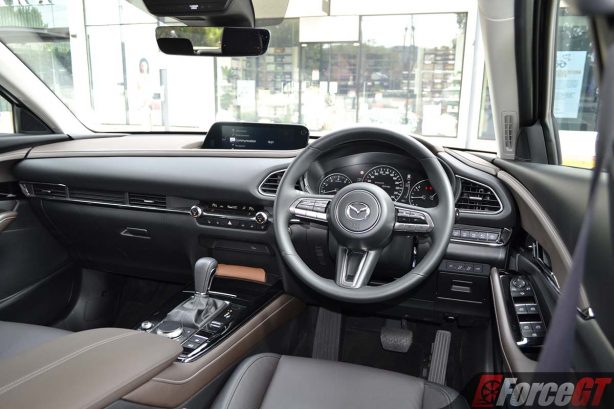 The CX-30’s interior ambience is more or less the same as the Mazda3, which isn’t a bad thing. It’s classy and well made, with premium materials all-round.

The MZD Connect system is the same as the one on the new Mazda3 and is standard across the range. It’s refreshingly modern compared to the old system and is now controlled solely by the rotary dial instead of functioning as a touchscreen as well.

We certainly have no problem with that, as the controller is easy to use. Scrolling through the now vertically arranged menu is a matter of turning the satisfyingly tactile click-wheel on the centre-tunnel clockwise.

Mazda should be applauded for making the monochromatic colour scheme looks sexy, as the infotainment presents superbly in mostly black and white.

Its voice control also works nearly 99 per cent of the time. All you have to do is speak the address or ask the system to call a contact stored on your phone, and the system will take care of the rest. 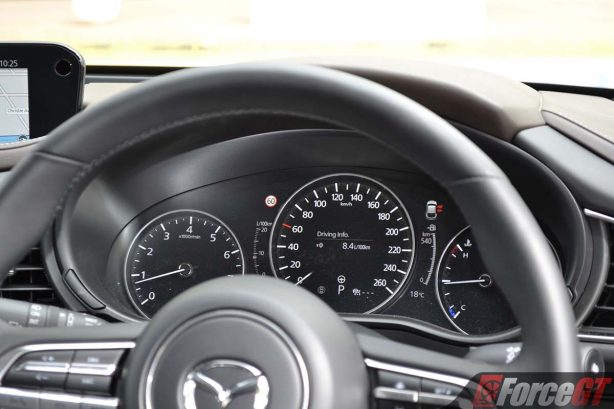 As is common these days, the CX-30’s instruments is made up of a central digital speedo that mimics the looks of a conventional dial to match the pair of analogue gauges flanked alongside it. It isn’t customisable like those on premium models but is superbly clear and easy to use.

The colour head-up display is similarly user friendly, projecting such information as the speed signs, sat-nav instruction, speedo and cruise control speed in the driver’s line of sight.

The front seats are comfortable with good back and leg support. Headroom is reasonable although the plunging roofline means the rear door aperture is smaller than your typical hatchback. Like the Mazda3, taller passengers might also struggle for legroom at the back.

At 430-litres, the CX-30’s boot space is only marginally smaller than the CX-5’s 442-litres. However, there are no trick double floor or hidden cubbies like some of its rivals. 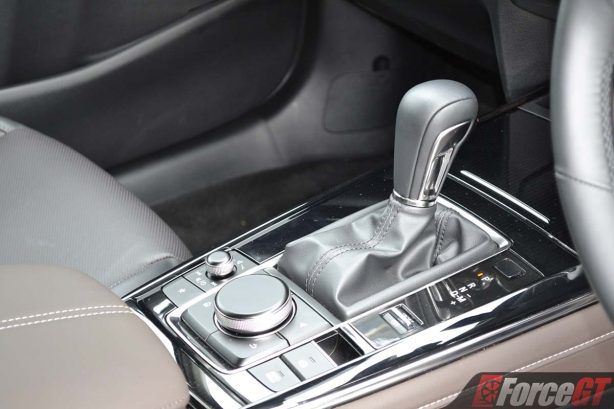 The CX-30’s driving position is spot on, with everything within easy reach and plenty of adjustment with the steering wheel.

The 2.0-litre mill tested isn’t going to win you a drag race but is adequate on the whole with good engine response. Its six-speed auto’s algorithm is well calibrated and is almost always in the right gear.

Like Mazda’s current crop of products, the CX-30’s refinement is excellent, with little engine, road and wind noise intrusion, creating a comfortable cabin at almost all speeds.

Its ride quality is firm, but well damped. There is some initial firmness that occasionally introduces minor jolts into the cabin on poor quality roads but it’s far from uncomfortable.

Delightfully, drivers would appreciate its sharp handling around the corners, where it steers with the same smooth fluid fashion as the lower and sportier Mazda3.

Its adaptive cruise control however, isn’t the sharpest and doesn’t work as well as in some other Mazda’s. Strangely. On a few occasions, it’s been caught late in detecting a stationary vehicle in front, requiring driver intervention to slow the car down. However, its downhill braking function is certainly welcome in keeping speed in check on our camera-infested roads.

Mazda claims the 2.0-litre CX-30 Astina will return 6.5L/100km in combined fuel consumption. Our weeklong test saw the trip computer sitting at 8.5L/100km with 80 per cent city driving, plus some enthusiastic blasts through country back roads.

Mazda currently offers capped price servicing for its current range of vehicles with prices starting from $315 for the CX-30. However, Mazda generally requires their vehicles to visit the service centre every 10,000km or 12 months, whichever comes first, as opposed to 15,000km/12 months of most of its rivals.

The 2020 Mazda CX-30 looks fantastic, drives well and is generously equipped. It successfully plugs the gap between the CX-3 and CX-5, and is another excellent model from Mazda that is well worth considering.