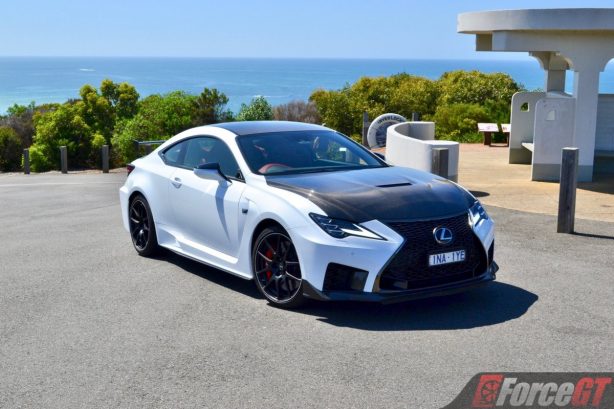 Slapping a Track Edition badge on a car is no easy task. Usually this involves extracting more power, reducing weight, strengthening the chassis, firming up the suspension and improving aerodynamics. If done right, the end product should be a couple of notches quicker, louder and sharper. And if the company’s accountants didn’t get in the way too much, expect significantly wilder exterior and interior lined with exotic materials such as carbon fibre and Alcantara.

On the back of a refreshed RC F, Lexus pulled a daring move by releasing the RC F Track Edition. Yes, that Track Edition badge is applied on Lexus’ baddest model since the hyperactive LFA supercar. Priced at $165,690 before on-road costs, it asks big money but it should be good, you’d think? Let’s find out. 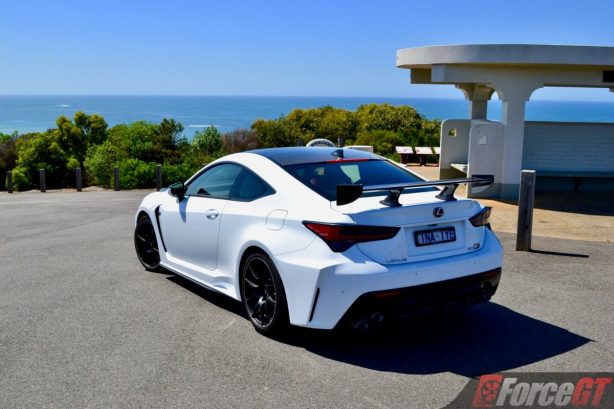 Lexus has never been known for track specials. In fact, the only track focused derivative of a standard model Lexus has produced is the LFA Nurburgring Edition, and that base car isn’t quite a ‘standard model’ to begin with. But if there’s a car that needs a track-prep more than any other in Lexus’ range, it’d be the RC F, for it’s not known for being the car one would take to a track. So, from the outset it’s a right move from Lexus.

But before we dive into the details, let’s take a few steps back and look at the RC F family tree. The Track Edition is based on the RC F, which itself is based on the RC coupe. Launched in late 2014, the now six-year-old RC actually has an even older underpinnings that date back to 2005. It bolts together the front of the current GS, the rear of the current IS and the center of the previous IS convertible. As a result, the RC platform is heavy and this carries over to the RC F, which weights a hefty 1,845kg. 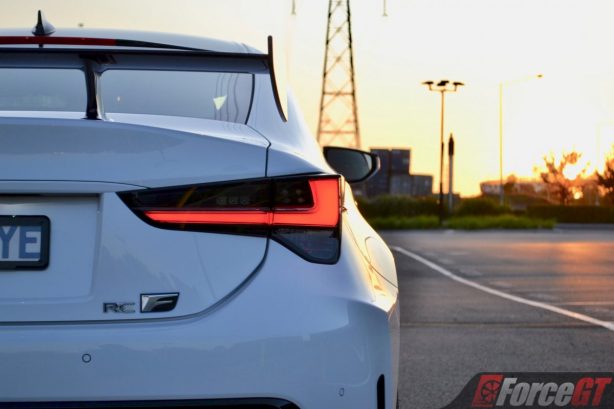 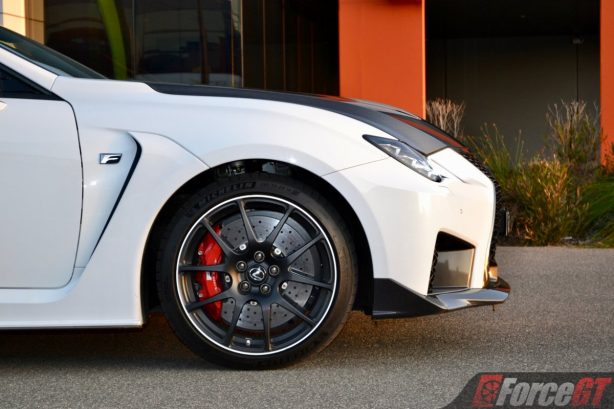 That weight reduction is certainly welcomed, but sadly it’s not met with more power. The atmospheric 5.0-litre V8 engine is the exact same as the one found in the RC F, producing 351kW of power at 7100rpm, accompanied with 530Nm of torque between 4800rpm and 5600rpm. While the figures are still potent, it could certainly do with a power upgrade, no matter how big or small.

Nevertheless, as with the regular RC F, the engine has been tweaked in a few areas as part of the 2020 update, including a lighter machined intake manifold and redesigned intake piping for a sharper and more linear response. A new, more solid rear engine mount has also been developed to further tighten handling at the cornering limit. 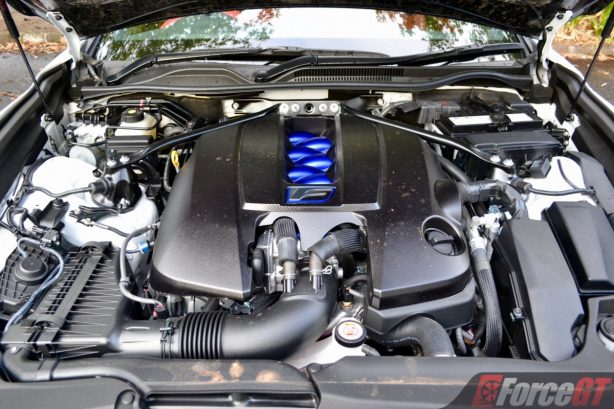 Make no mistake, despite feeling a bit old-school, this big highly strung V8 remains one of our all-time favourite engines. Its dual personality means it’s discrete and muffled under a light throttle, turning into a complete beast when hammered. Send it past 4000rpm in the most extreme Sport+ mode, you’ll be treated with one of the best engine soundtracks this side of a V8 Supercar, and the atmo-V8 theatrics don’t stop until its frenzy 7100rpm cutoff. This thing just sounds bloody brilliant!

Power is channeled to the rear wheels via a torque converter eight-speed automatic transmission which, like the V8 it’s hooked up to, shifts smoothly and lazily on cruise, switching to a near dual-clutch fast cog swap in the upper revs. For 2020, it debuts new shift control algorithm with greater intuition and, in Sport S+ mode, more aggressive downshifting than previously. 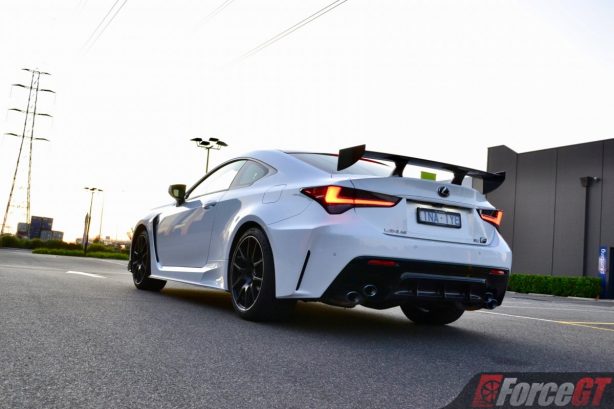 For the first time since the LFA supercar, launch control is standard across the RC F range to enable the fastest standing-start acceleration, and the lighter Track Edition is two-tenths quicker than the RC F in the sprint from 0 to 100km/h, at just 4.3 seconds, making it the fastest accelerating Lexus since the LFA but still chasing the Germans which have all dipped below the 4-second mark.

But straight line punch is only part of the story, how does it handle the bends? This is where the Track Edition fights back. The 65kg weight savings over the standard RC F may not look like a lot, but the improvement to the way it drives as a result is tremendous. The nose is much better locked down, affording sharper turn in and crisper change of direction. The rest of the lighter weight body follows through the bend with greater alacrity, and if you’re keen, a big slab of throttle and lots of opposite lock would easily send the tail end into a progressive, controlled slide (with the electronic watchdog turned off, of course).

Granted, it’s no Lotus Elise but where the regular RC F can at times wrestle with your commands, the Track Edition just flows with your inputs. Placing this big GT sports car on your intended line is much more straightforward and rewarding. Lateral grip is also higher thanks to the specifically developed and very sticky Michelin Pilot Sport 4S tyres, pushing cornering limits further. 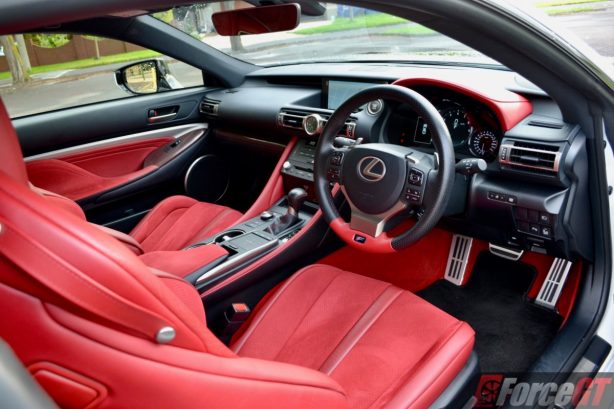 With the new update, Lexus has ditched the Torque Vectoring Differential (TVD) in which two electric motors, one on each side of the rear axle, controls torque distribution to each rear wheel. Instead, both the new RC F and RC F Track Edition now have a simpler and lighter Torsen mechanical limited-slip differential, which is just fine but we miss the TVD’s quicker reaction, especially on corner entry.

The steering is precise with good feedback for an electric rack, but for track use we wouldn’t mind a slightly tighter ratio for quicker response. The carbon ceramic brakes, on the other hand, have got track duty covered, with them capable of hours and hours of fade-free hard braking. While carbon ceramics are designed for high temperature operation (such as track use), it’s surprising how unexpectedly good they feel on the pedal under normal driving. It’s easy to regulate, not abrupt and devoid of noise, traits usually found in carbon ceramic brakes. And for those obsessed with clean brakes, you’ll be pleased to know that carbon ceramics give out almost no brake dust, no matter under what punishment. 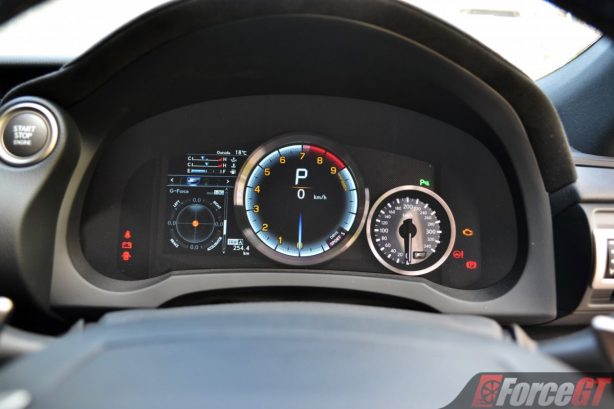 On the topic of normal driving, the RC F Track Edition is easily the easiest track car to live with on a daily basis. Around town it possesses all the hallmarks of a Lexus – serene, refined and very civilised. Tuning of the passive, non-adaptive suspension is brilliant, with it delivering smooth ride across all but the harshest of bitumen, while keeping a good layer of road feel for you to know what’s going on underneath. This is a track-orientated sports car that you can use everyday.

And it shows on the inside, the interior is draped in a very plush and luxurious blend of leather and Alcantara. The loud red treatment is exclusive to the Track Edition and serves as a constant reminder that you’re in something rather special, and boy does it look good. 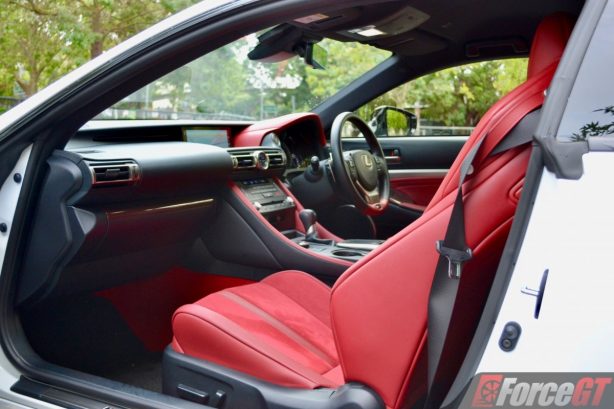 The seats are some of the best in the business – superbly snug and comfortable, and the creature comforts are all there – climate control, electric everything and a punchy 17-speaker Mark Levinson audio system.

The dashboard is starting to age a little though 2020 brought about a few updates, namely the new style air vents and a 10.3-inch widescreen centre display. The latter, however, still operates through Lexus’ fiddly touch pad interface, and Apple CarPlay and Android Auto are still lacking. 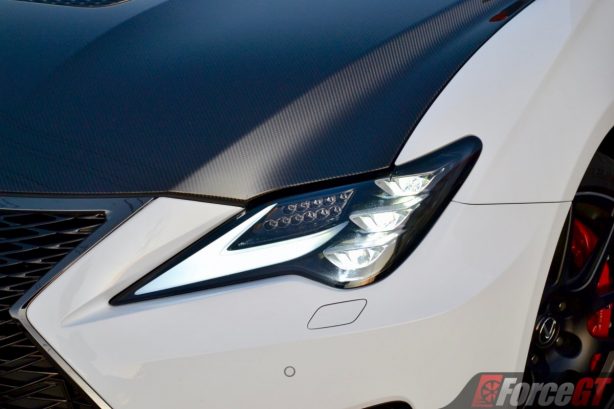 Lexus has mostly adhered to the rule book when producing the RC F Track Edition. It looks mean, it’s been put on a diet, and it makes all the right noises. The approach taken by Lexus might lean on the conservative side if compared to a German with similar intent (the Lexus lacks suspension and drivetrain adjustability), but that’s the whole purpose here. The RC F Track Edition is a ‘get in and off you go’ kind of track machine that doesn’t bite as hard as, say a BMW M4, if you make mistake. It’s an overall better and more agile version of the standard RC F, without sacrificing much of its donor car’s comfort and road manners. Whether or not the $30k premium is worth the upgrade to the Track Edition is, however, a different story.