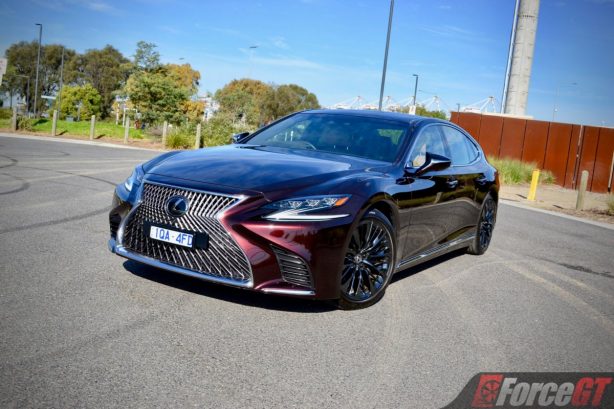 Before the SUV craze, the definition of the ultimate luxury car was a large saloon with the sveltest exterior design, the plushest cabin you could have ever imagined, and the latest technology and gizmos. It had to also have the ability to convey authority and power everywhere it goes. The early 80s was when the luxury saloon became the most well defined, and the benchmark was none other than the W126 series Mercedes-Benz S-Class.

If any luxury manufacturer wanted to show that they meant business, the S-Class was the one to beat.

So, on warm summer’s day in 1983, in a discrete meeting room at Toyota Motor Corp’s global headquarters in Toyota City, Japan, an ambitious plan was in the making. Company founder Eiji Toyoda issued a challenge to the top brass of the firm. It was called “Flagship One” and the goal was simple – to build the world’s best luxury saloon that would outshine the almighty Mercedes-Benz S-Class.

And it was not going to wear a Toyota badge, nor be called a Toyota. The new car would launch under a new luxury brand named Lexus, complete with its own logo, dealerships and buying experience. 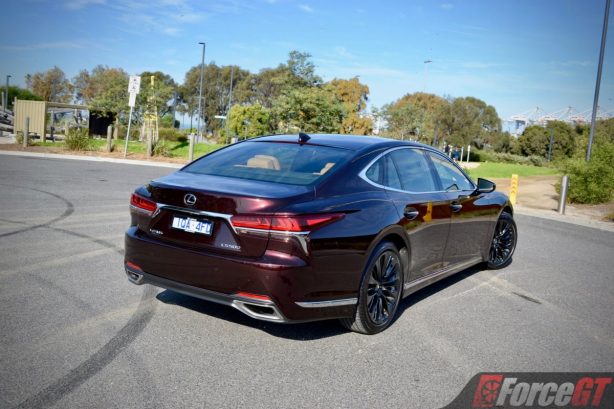 Nineteen-eighty-nine was when Lexus said hello to the world. It was when the status quo in the premium space shifted and car manufacturing processes changed for good. The first Lexus LS 400 was well ahead of its time, sporting breakthroughs like automatic tilt-and-telescope steering wheel, holographic, electro-luminescent gauges, electric memory seating, an electrochromic rear-view mirror and vibration-insulating rubber mounts.

Its build quality was so impeccable that none in the industry thought was possible, and its refinement and quietness were at another level. Backed by what was and has been widely regarded as the industry’s best customer service experience, Lexus found success and the Mercedes-Benz S-Class was in trouble.

In the subsequent years, the brand grew to become a formidable player in the luxury segment, with a fast expanding portfolio of models that included gran coupes, sports sedans, crossovers and even a supercar (the hand-built LFA). 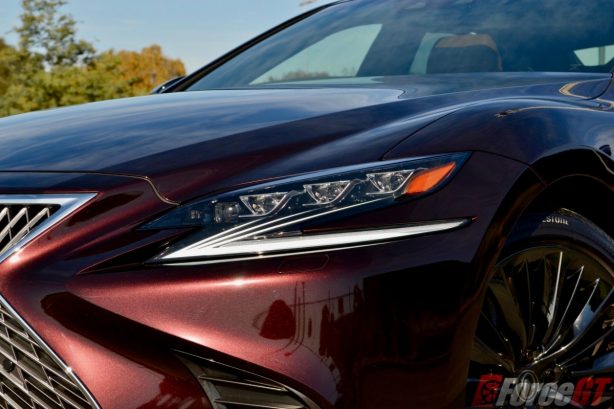 Today the LS remains the flagship of Lexus but while the challenge for the original LS was to penetrate the German-dominated luxury market, the latest fifth generation model has to make up for lost grounds left by the somewhat forgettable third and fourth generation LS.

And we are glad to say that the current LS, introduced in 2017, finally brings back that LS magic that made the first one so great. It’s arguably the sexiest large saloon in class and it drives with a good dose of athleticism. Fittingly, the best LS since the first also coincided with the Lexus’ 30th birthday last year. So what’s a better way to celebrate that milestone than to release an exclusive special edition of the LS?

This is the Lexus LS Inspiration Series, a flagship developed to – as Lexus puts it – embody the pinnacle of craftsmanship, technology and refinement. We were given the keys to this luxurious limo for a week and the first impression was indeed a feeling of déjà vu. Like the original LS from 1989, this Inspiration Series has got us Wow!

First, there’s the exterior colour. Exclusive to the Inspiration Series, it’s called Scarlet Crimson and what a distinctive shade this is. It looks maroon but it’s not. It has a hint of purple and brown but it’s neither. Regardless, it’s dark, deep and rich. Light bounces of it give different hues depending on which angle you look at it from. It’s just beautiful and photos don’t do justice.

Matching that bespoke paint work is a set of 20-inch alloy wheels draped in gun-metal chrome colour called Dark Vapor – another exclusive wheel coating for the Inspiration Series – and boy do these rims look amazing on the LS.

Our team here at ForceGT have universally agreed that if we were going to buy an LS today, this is exactly how we would spec it, exterior wise. 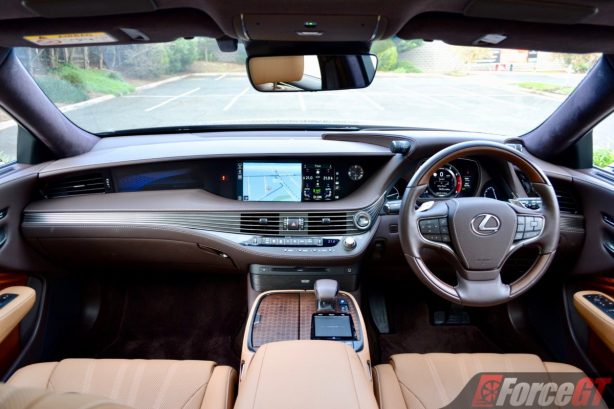 And the interior? Again, another wow! Only bigger. The cabin of the LS Inspiration Series does not look like it belongs to a car of this price, which is listed at $198,922 for the LS 500 tested here. No, it feels more like something twice that sticker. Think something in the realm of Bentley and you’re pretty close.

The already opulent cabin of the standard LS has been further refined for the Inspiration Series with an exclusive combination of super-soft chestnut semi-aniline leather-accented trim and nobel brown fabric door texture, complemented by intricate walnut Lexus-insignia laser-cut ornamentation.

A unique finishing touch for the LS Inspiration Series is the ‘Kiriko’ pattern ornamentation panel across the passenger side of the dashboard, featuring an engraved ’30th Anniversary’ signature with blue illumination.

Interior ambiance is nothing short of first rate, while fit and finish is of typical Lexus perfection. The tan-brown interior is quite simply a visual feast for the eyes and complements the exterior body colour perfectly. 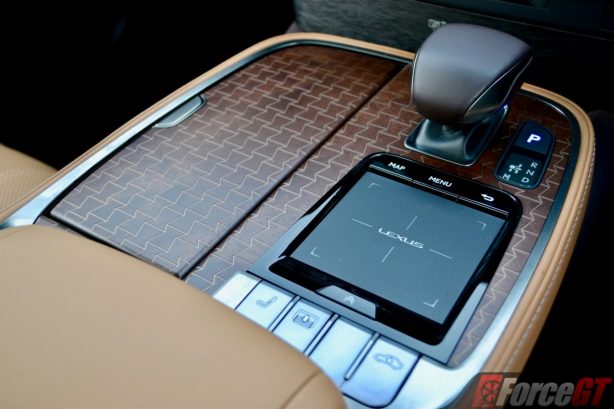 As part of the 2020 update to the LS range, the 12.3-inch centre display now features Apple CarPlay and Android Auto compatibility, in addition to satellite navigation, voice control and DAB+ digital radio. The screen is operated using a touch pad in the centre console. Dubbed Lexus’ remote touch, the interface has copped much criticism for its clumsiness and cumbersomeness, and we agree. Rivals’ systems have advanced so much that the Lexus system is in desperate need for a major overhaul. Together with the dated infotainment screen graphics, the Lexus control command centre is still the weakest link in an otherwise very impressive interior.

For entertainment, the LS cabin packs a superb 23-speaker Mark Levinson premium audio system and twin 11.6-inch rear screens for those lucky enough to be chauffeured around in the back. 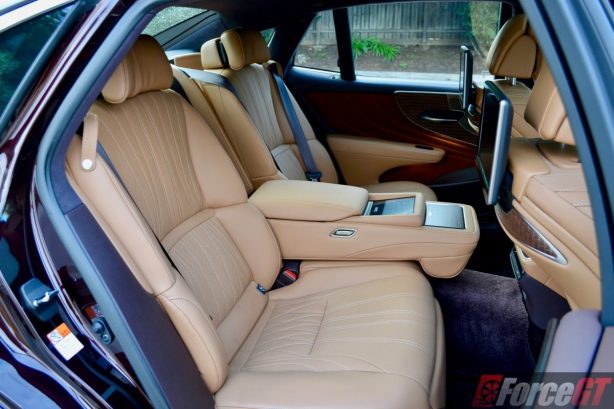 While all bar the rear middle seat are massaging seats with heating and ventilation, it’s in the rear where the LS experience can be had in its fullest. The rear seats’ Shiatsu massaging function extends to three full-body programs (Refresh, Stretch and Simple) and four that target specific areas (Upper Body, Lower Body, Shoulder, and Lumbar), made better with spot heaters that warm specific areas of the body.

When unoccupied, the front passenger seat can even be moved forward to increase rear legroom and make way for a raised ottoman. With the seat back fully reclined, you can truly stretch out in the back. Now that’s first class. 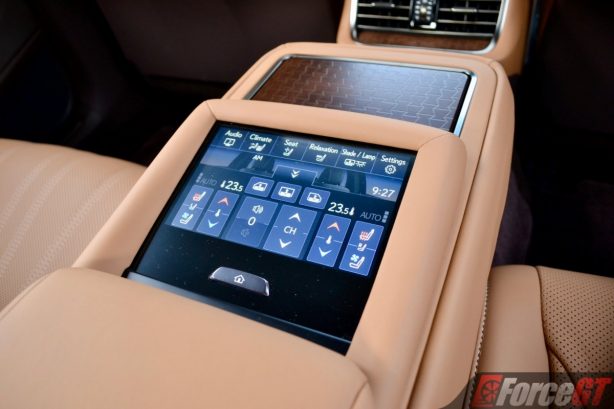 The LS 500 Inspiration Series tested here is powered by the same twin-turbo 3.5-litre V6 as found in the standard LS 500. Developing a strong 310kW and 600Nm, it is without doubt the most refined bent six we have ever sampled. Like the original LS, it’s silky smooth across the rev range and amazingly muted at cruise.

Power delivery is superbly linear for a turbo mill, too, made better by that responsive and lively throttle. With peak torque on tap from just 1600rpm, the 2-tonne LS is capable of nudging 100km/h from standstill in just 5 seconds.

Of course, it never feels quite as quick though due to the lack of aural theatrics (even in Sport modes with noise piped into the cabin), but it doesn’t have to in this segment – it’s no sports car.

The 10-speed automatic transmission – the first and still the only type in the premium space – is another winner, dishing out smooth and quick gear changes, which are also all executed intelligently at the right time. The ratios are spread perfectly and never feel too many. Cruising at 100km/h in top gear the engine is almost idling at 1300rpm.

It’s a cracking drivetrain, one that we hope would filter down to future Lexus models (such as the 2021 Lexus IS). 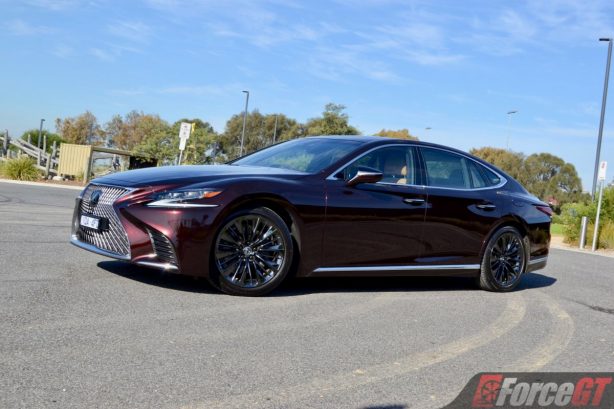 As with every Lexus model except the LX, a hybrid version is also available. Commanding a mere $600 premium, the LS 500h is equipped with the so-called Multi-Stage Hybrid drivetrain which consists of a 3.5-litre V6 petrol engine assisted by an electric motor and drives through a 4-speed/CVT combo that mimics a conventional 10-speed auto.

Combined, the total output of 264kW and 350Nm may seem like a big deficit from the LS 500’s V6 turbo but, thanks to instant torque from the electric motor, the dash from 0 to 100km/h is still brisk at 5.4 seconds.

We’d still take the V6 turbo any day though, for it’s a better matched to the LS’ remarkable chassis and suspension tuning. Despite it’s sheer size and weight, the LS drives like a much smaller car with crisp turn-in and tight body control. While the LS is most at home cruising the freeway or wide open country roads, it will enjoy a good, challenging piece of tarmac leading to the estate up the hill.

The new lightweight, high strength GA-L (Global Architecture – Luxury) platform that underpins the LS truly delivers the goods and Lexus has done a commendable job in honing the dynamic abilities of its flagship. 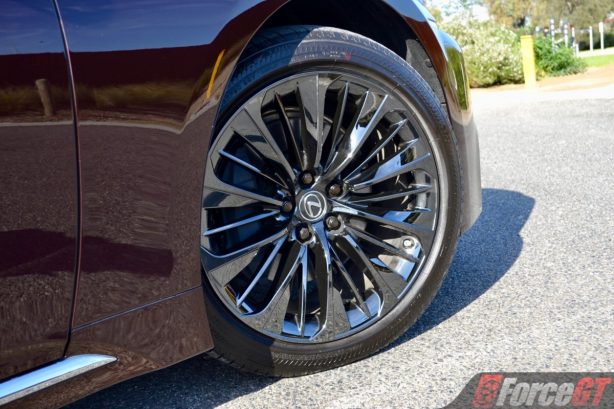 While not quite fully autonomous (yet), the LS comes with the full fruit of driver assistance aids, including lane-keep steering assist, active radar cruise control, and traffic sign recognition. There’s also a pedestrian detection and avoidance system in which the car can automatically brake and steer around a person while staying in the lane.

The LS’ gigantic 24-inch colour head-up display is the world’s largest, but the information it serves up is the usual stuff we have seen before. Granted, it’s a great piece of tech and the real estate is certainly there, here’s hoping Lexus would update it to dispense more than just oversized speed readouts and sat-nav instructions.

Creating a special edition model of a flagship is never an easy task, especially true for an exclusive limited-run model built to mark a brand’s 30th anniversary. But Lexus has managed to pull it off with the LS Inspiration Series. Building on the already accomplished fifth-gen LS, the Inspiration Series adds a wrath of truly exquisite details elevating the Lexus flagship even higher up in the luxury space. And the best thing is it only costs a modest $3.5k more than a standard LS.