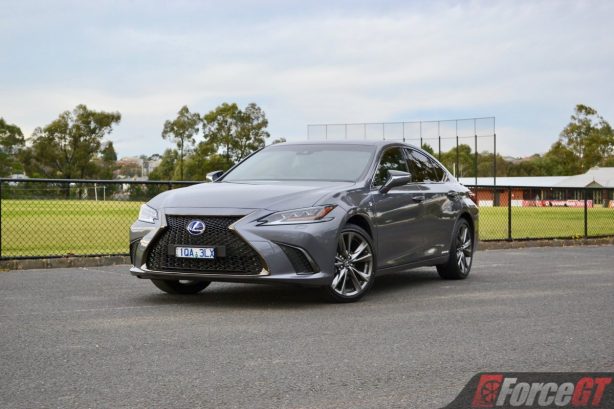 When we drove the Lexus ES 300h in Luxury and Sports Luxury trims last year, we were impressed by its frugal fuel consumption, ride and handling balance, and elegant yet stylish design. The mid-size sedan from Lexus has come a long way, with each generation a stepped improvement of the previous, but this latest seventh-generation model presents the biggest change yet. It’s no longer the conservative saloon that blends into traffic to a point of being almost invisible. It now has style, a good dose of it. And the recently introduced F Sport model even oozes sophistication and sportiness never seen before on the ES.

So, when the opportunity to get behind the wheel of one came about, I did not hesitate. First thing first, the price. Slotted in between the range-opening Luxury and top-spec Sports Luxury variants, the F Sport is priced at $69,755 plus on-road costs, which makes it just $1.5k dearer than the IS F Sport. 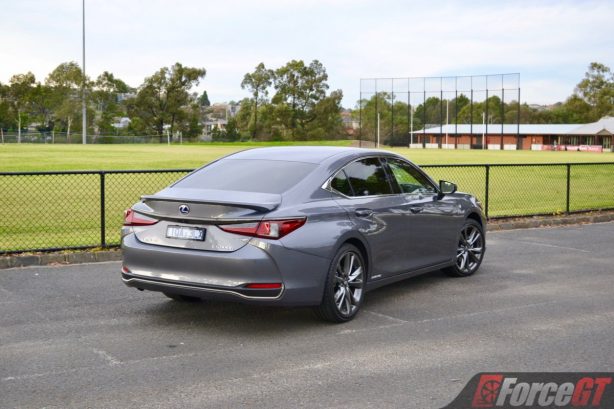 You might be wondering where does the ES sit in Lexus’ pecking order and what are its competitors? The ES is a bit bigger than the IS but the key difference is the ES is a front-wheel drive vehicle whereas the IS is rear-wheel drive. In the wider segment, the ES competes with the likes of Audi A6 and BMW 5 Series, though not quite a direct rival as both the Germans are slightly bigger and play at a higher price bracket.

The ES, then, is quite a unique proposition in that it offers the space of a mid-size sedan for the price of a compact executive. Perhaps, it’s closest rival is one from the more mainstream end of the market, the Volkswagen Arteon. 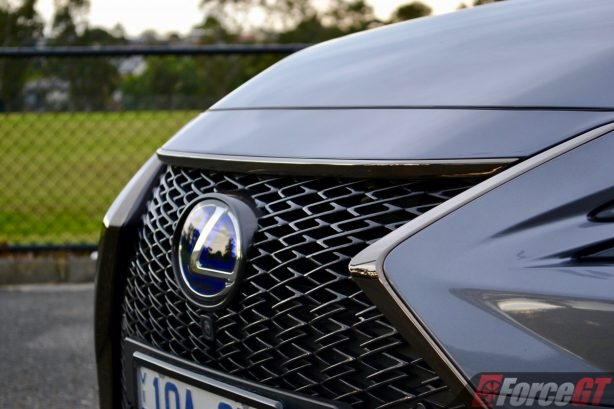 Back to the ES F Sport, the new variant features the brand’s usual F Sport details including mesh grille and black plating across the more aggressively styled front bumper. In the rear, the chrome strip that joins the taillights and stretches the entire width of the car gets a darker tone, so is the lower rear bumper garnish. It also gets 19-inch F Sport wheels and F Sport badging on the front fender.

Previously, you would have to get into the range-topping Sports Luxury to get the triple-beam LED headlamps with sequential turn indicators and adaptive high beam. Fortunately, these features are now also equipped in the F Sport. 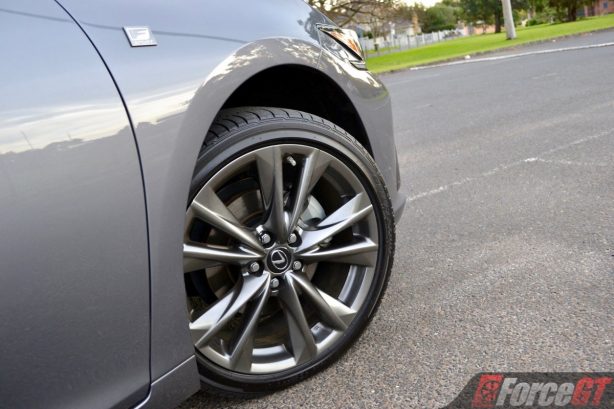 On the inside, the highlights are the beautifully crafted F Sport-embossed front seats, which retain the Luxury’s 10-way power adjustable driver seat and Nulux leather upholstery but are much more snug and supportive.

There are also the perforated-leather F Sport steering wheel and my favourite – the LFA-esque moving digital instrumentation cluster.

Overall, the F Sport cabin ambiance is more uplifting thanks to generous application of bright aluminium trim inserts. Those that are more adventurous can even opt for red leather on their seats. 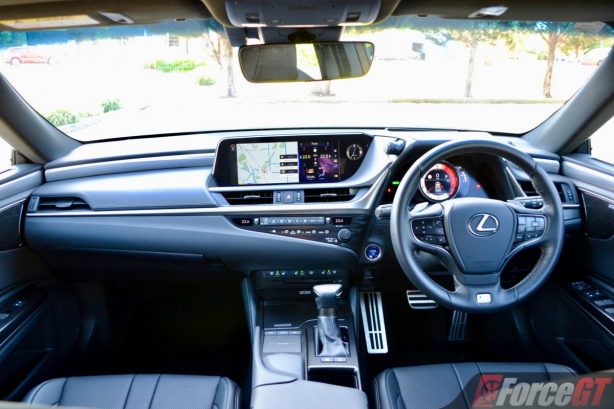 Unlike European rivals where ticking a long list of options is often necessary in order to dress up a car properly, the Lexus comes pretty well loaded out of the box. Goodies that you don’t have to pay extra for include a massive 12.3-inch infotainment screen, wireless phone charger, head-up display, Apple CarPlay/Android Auto connectivity and a punchy 10-speaker Pioneer audio system.

The only option available is the $4,000 Enhancement Pack (fitted to my test car) which throws in a 17-speaker Mark Levinson audio system, heated steering wheel, and powered boot lid with kick sensor.

While most of the features in the ES are up to date, the infotainment screen isn’t one. The graphics and menu structure are in desperate need of an overhaul, and the touchpad style interface is difficult to use when on the move. We have seen other Lexus models – RX and the updated IS and LS – already changing to a touchscreen, so here’s hoping the ES will get the same in the next round of update. 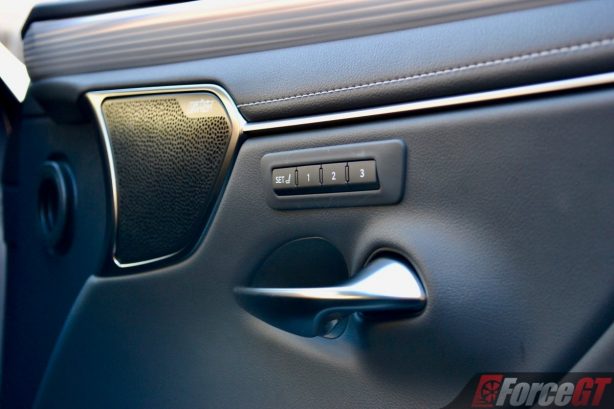 There is, however, still room for improvement. The speed sign recognition system is not the most accurate, struggling especially around temporary speed signs in areas of road works and timed speed limits around school zones. The lane-keep assist function also oddly prefers to lean on the left side of the lane rather than in the centre, which prompted me to turn it off completely at times. 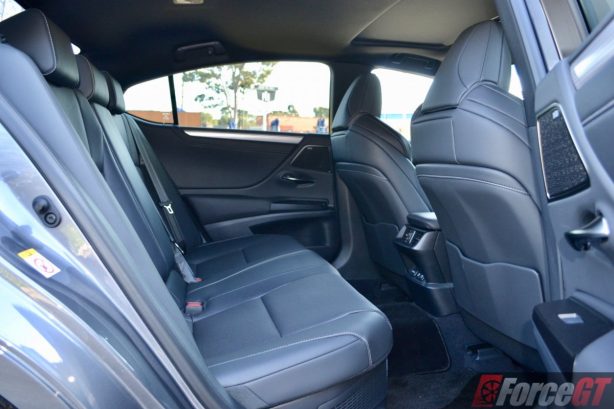 If interior space is important to you, the ES is pretty much a no brainer. For a mid-size sedan, the space inside is more akin to those found in a BMW 7 Series or Lexus LS – both are one size up compared to the ES. There’s plenty of room up front and in the back. Such enormous is the rear legroom that you can stretch out in the back even without moving the front seats forward. No surprise as in the ES’ second largest market, China, most owners are chauffeured around in the back, so you can see the design intention there.

Cabin storage is decent, with front passengers having access to a deep glove box and two large cup holders. Rear occupants in the outboard rear seats also get their own cup holder located in the drop-down arm rest. A truly ingenious design is the centre console bin, which is not only huge but has a lid that can flip open both ways – towards the driver or towards the front passenger. The door pockets are on the small side though, made worse by the small aperture. A standard water bottle will only fit when placed horizontally which takes up the entire space.

The boot measures a respectable 454 litres, larger than the 410-litre cargo capacity of the BMW 530e. What’s surprising – and disappointing – is the inability to fold the back seats (due to the presence of a V-brace for added rigidity), though there’s a small removable hatch behind the drop-down centre armrest in case you do need to carry lengthy items in the boot. 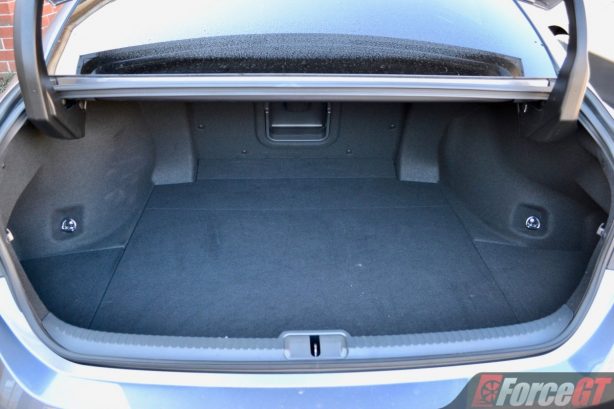 Despite the sports-oriented badge, the ES 300h F Sport, like the rest of the local range, is still a hybrid only offering. A 3.5-litre V6-powered ES F Sport would make more sense. This variant is available in certain markets, unfortunately Australia is not one of them.

That said, the ES’s hybrid system is a good one. It combines an Atkinson cycle 2.5-litre four-cylinder direct-injection petrol engine with a battery pack and electric motor. With the engine rated at 131kW and the electric motor producing 88kW, the powertrain outputs a combined total of 160kW of power and 221Nm of torque. Normal, Eco and Sport driving modes can be engaged even in electric-only (EV) operation.

If you, like so many, have a distaste for hybrid drivetrains, you’ll be pleasantly surprised to find modern hybrid systems, like the one in the ES, offer such sprightly performance. There’s plenty of go from the get go thanks to the strong torque from the electric motor supplementing engine power, with zero to 100km/h acceleration covered in a swift 8.9 seconds. It’s a relatively effortless affair both around town and in the open roads. 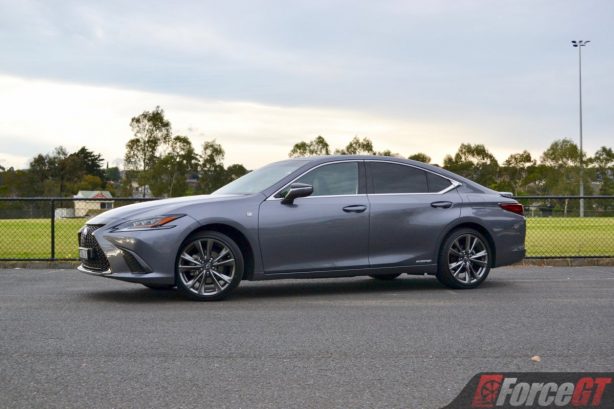 The transition from electric to engine power is remarkably seamless – there is barely a hint and if you’re not paying close attention you probably won’t even notice anything. The CVT – which is again not the kind of gearbox you’d expect to find in an F Sport – works quietly in the background without ever bringing attention to itself. Besides the slight whine under braking when the electric motor recharges the battery, the ES is superbly refined, and quite possibly one of the most hushed and relaxing cars we have ever driven.

So much so that it feels like it’s lacking a bit of drama for an F Sport branded model, which is unfortunate because, dynamically, the ES is actually very well sorted. There’s a real sense of controllability for such a large sedan, with the nose tucking into corners eagerly and body roll constantly kept at bay. The F Sport’s adaptive dampers have a slightly sportier setup, which combines with that quick steering to give a sharp and linear response to driver inputs. 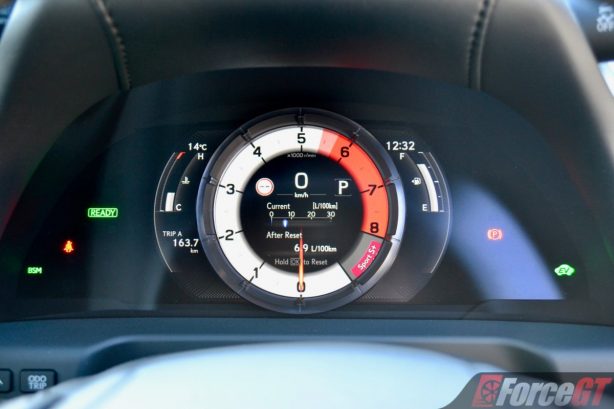 Despite being front-wheel drive, there’s plenty of grip on offer, and with the hybrid drive battery positioned in the rear of the car helping front to rear weight distribution, handling is surprisingly neutral, too.

All of which makes me think the ES F Sport deserves a more powerful and characterful engine. The hybrid is okay but a turbo four or high capacity V6 would really take the ES’ driving experience to a whole new level.

But for now driving still isn’t the focus of the ES, not even in F Sport guise, rather it’s comfort and luxurious motoring, with efficiency to boot. Ride quality is outstanding, even on our crumbling roads, and the cabin is always serene and tranquil. At the end of our week-long test the ES’ average fuel consumption came in at just 6.7L/100km, despite my constant heavy right foot. Driven normally I have no doubt it will be able to get close to its rated 4.8L/100km.

As a roomy, well-appointed mid-size luxury cruiser, the Lexus ES 300h has much to like. The hybrid drivetrain is impressively efficient, the safety tech is comprehensive, and overall it’s a stylish package that strikes the right balance between ride and handling.

The new F Sport model hopes to fill the void left behind by the much-missed Lexus GS – the car that used to carry the mid-size sports sedan flag for Lexus. But until the ES F Sport is given a beefier powertrain with a bit more poke and character, the supposedly sportiest variant of the ES range will remain more luxury than sport.