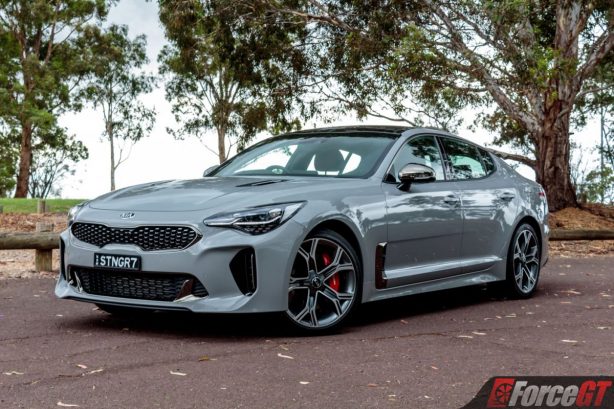 The opportunity to develop a flagship car draws out the best in a manufacturer’s staff. The designers exert more effort in sculpting the visual styling and the engineers tweak and tinker away long into the night to draw out the performance that they know is locked away. The end result is a car that the manufacturer is proud to stand behind, it’s not just there to fill a gap in the market, no it’s there to make an impact and shout to the world its accomplishments. 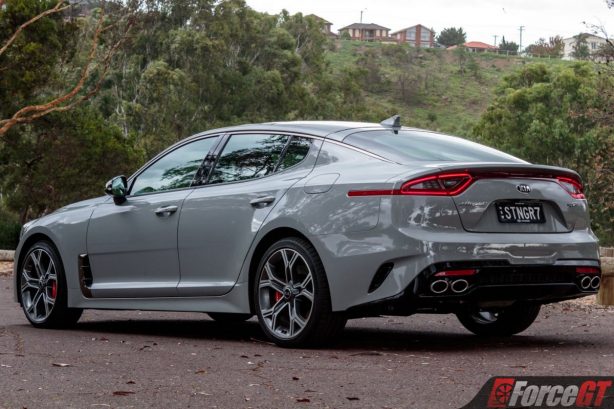 And that’s exactly the type of car the Kia Stinger GT has been since its inception in 2017. Three years have rolled through since then and the lightly updated 2020 Kia Stinger GT is available now from $60,990 which may seem like a lot for a Kia but look past the badge and you’ll quickly find that there’s a lot of bang included for all those bucks. 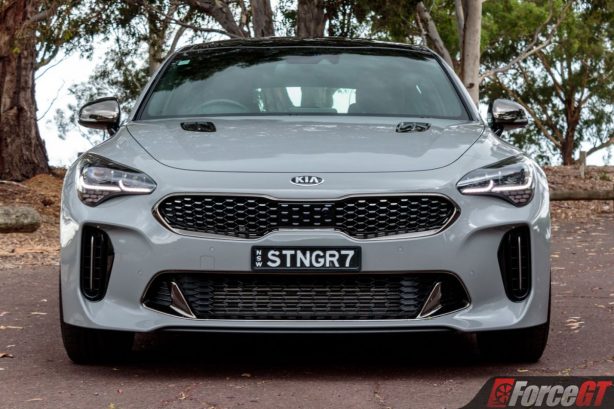 Just on the visual styling alone the Stinger GT stands tall and proud looking like nothing else on the road, uniquely styled from all angles and a joy to behold. The prominent tiger nose grille delivers brand styling and character to the front end. Those 19-inch alloy rims wearing 40 profile rubber up front and 35 profile down the rear fill out the guards and mask the giant red Brembo brakes leaving little to the imagination as to what sort of car the Stinger is. Smoked chrome highlights are used sparingly across the body and I may be showing my age here but in our tester’s solid grey the whole package looks a real treat. There’s a few artificial aero vents used in the design that could be done away with, or made functional at the least, but 3 years on and the Stinger GT is still a visual machine of envy to many. 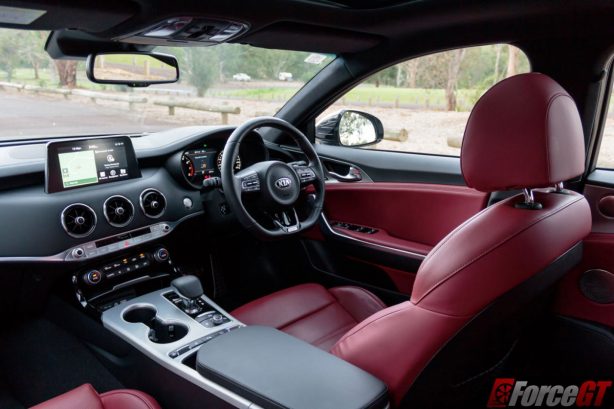 To remain competitive within their market space Kia would normally sacrifice the interior in terms of styling and materials to keep the costs down. They’ve made good interiors previously, just not great interiors. I can confidently say that the Stinger GT has an excellent interior, Kia stepped up their game and it shows. It’s the small touches that elevate it above expectations, metal speaker grilles, perforated leather seats and steering wheel along with a mix of gloss piano black and brushed metal trimmings. 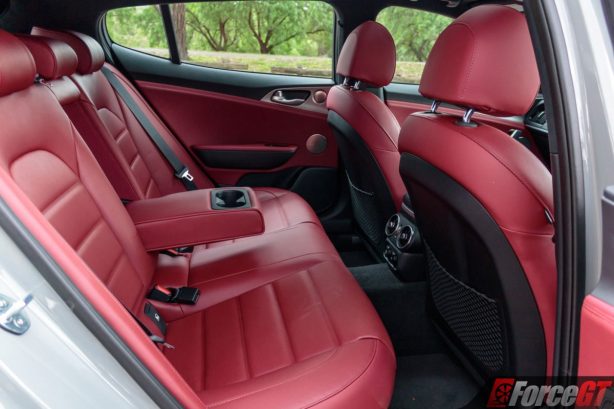 Rear passengers are in for a treat as well thanks to an abundance of shoulder and leg room and a well featured rear centre console that has twin air vents and charging ports built into the base. Foot room under those front seats is lacking and the driveshaft tunnel cramps things up when there’re three passengers back there but for those with children there’s plenty of room. Easy to access ISOFIX points are available on the flanking seats where the centre seat hides the drink holders in its fold down arm rest. 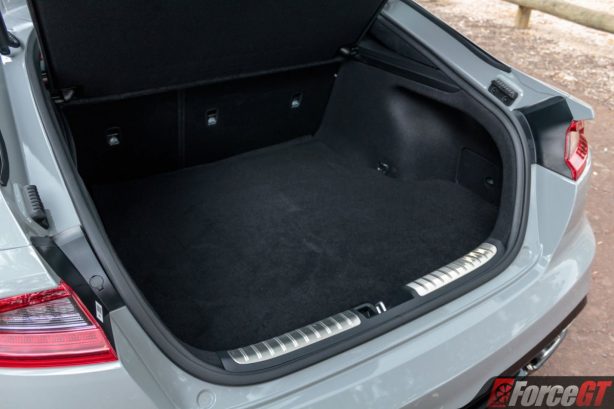 Boot space measures in at a usable 406 litres, expandable up to 1,114 litres after you drop the 60/40 split rear seats. It’s not the most cavernous of rear boots and the sloping roofline makes loading bulky items an endeavor. The flat boot floor does have a small drop down which can also make retrieving things equally challenging but at least the rear scuff plates will keep things from scratching up that lovely body. 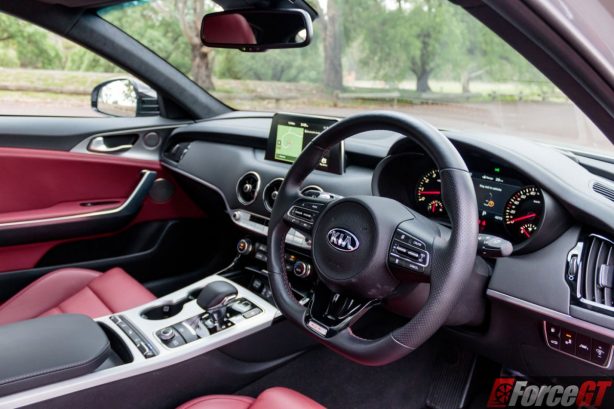 There’s a lot going on from the drivers seat which is no surprise as Kia have thrown every toy they have into the Stinger GT which leads to the challenge of where to put all the controls. For the most part they’ve done a good job on keeping things easy to access and in places that simply make sense. But they did drop the ball on the lane keep assist switch which is buried down and behind the steering wheel which blocks it from your eyesight. It’s a real struggle to flick on and off when you’re focused on the road and really should be wheel mounted as it’s a frequently used feature. 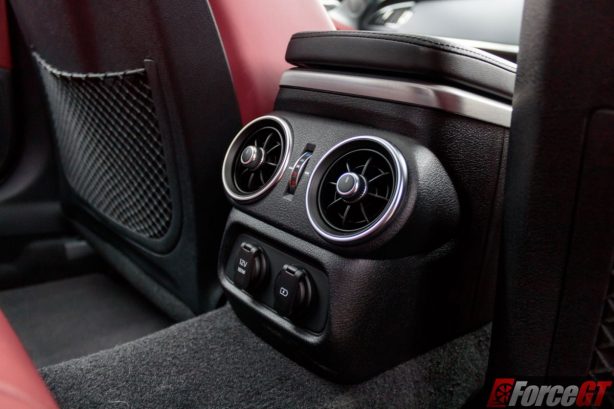 Build quality overall is quite good but we did notice the plastic door sound deadening had begun to escape from behind one of the trim pieces and the sunroof has the smallest of rattles when slid back. Other minor issues can be found if you dig deep enough with a few being related to the front seats. They’ve got built in adjustable side bolsters which are completely automatic depending on the drive mode you’re in and they’ll grip you nice and firmly when engaged. But it would be ideal to be able to set them up manually. Another point of contention is that when exiting the Stinger GT, the seats move back to provide easier exit and entry, but the process isn’t the fastest and you’ll find yourself waiting for them to finish before hopping out, and there’s no way to turn this off. Finally there’s not all that much storage up front with the shallow centre glovebox losing its capacity to the transmission tunnel. 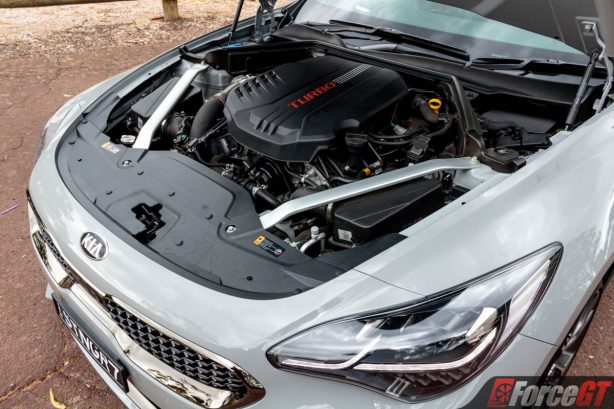 Those minor concerns are easily forgotten about the moment that lovely 3.3-litre twin turbo V6 revs into life and starts to work its magic. There’s a total of 272kW of power available at 6,000rpm and 510Nm of torque peaking as early as 1,300rpm through to 4,500rpm. Power delivery depends entirely on which drive mode you’ve selected. Despite the name, if you plant it in comfort mode the power delivery is more savage than you’d expect and more fun too. It’ll downshift just in time for the turbos to have spooled up so you get a huge rush of power all at once and it’s addictive to say the least. The power builds all the way through the rev range and there’s plenty of it. In sport mode the power delivery is less of a hit from a sledgehammer in nature giving far more controllability over the throttle.

I’ve never been a big fan of the V6 soundtrack as they tend to moan rather than roar like their more vocal V8 cousins but I found myself enjoying the assortment of turbo infused noises that the Stinger GT creates, particularly the exhaust note. Our test Stinger GT did come equipped with the optional bimodal exhaust system which livens up the the entire experience and is well worth the extra expense. 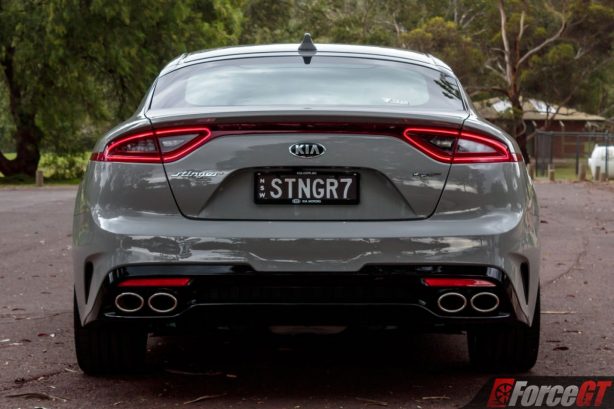 For maximum acceleration from a standing start Kia have built in a launch control procedure that takes care of all the tricky stuff and lets the car get on with crushing your internal organs as it plants down the power. I was fortunate enough to take the Stinger GT out on a cold night with dry roads and those looking for a rush won’t be disappointed with the straight line performance. The rear-wheel drive sedan is capable of a 0-100km/h sprint in just 4.9 seconds.

Paddle shifters tucked in behind the wheel give the option for manual shifting from the 8-speed sports automatic. That’s right, there’s no dual clutch system here, just a well optimised automatic which is responsive but a bit of a control freak. It’ll occasionally take over and shift gears for you even if you’ve been using the paddles meaning it won’t hold gears right up to the limiter.

Washing off the speed falls to the massive Brembo brakes, four pistons up front and two down back. Pedal feel provided ample feedback allowing for precise braking and it’s only once you get on them hard that you start to notice the amount of weight the Stinger GT is packing and how long it takes to wash off all that speed you just rapidly built up. 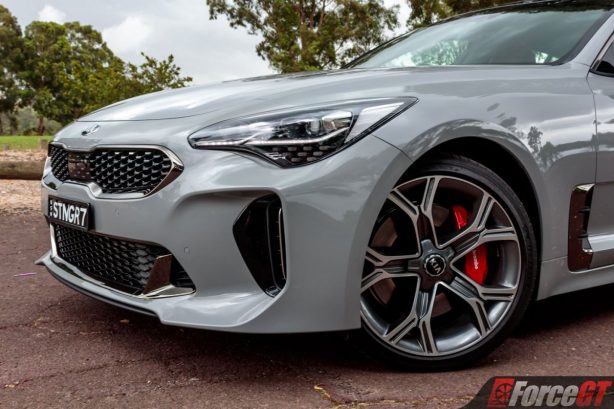 Through the bends steering remains responsive and direct keeping you in tune with the road. The Michelin Pilot Sport 4 tyres provide tons of grip and more than you’ll be needing for a quick blast on public roads. Honestly I wouldn’t be pushing the Stinger GT near its limits on anywhere but a racetrack as all that power and the weight can get you in trouble quickly with just a small lapse in judgement. At seven tenths the Stinger GT is a fun and engaging drive, push it beyond that and fear replaces fun as narrow public roads can’t provide the right arena needed to pull out all of its potential safely.

In sport mode the suspension firms up and has the car jiggle about to the extent that you’ll be glad comfort mode is available once you’ve had your fun. Surprisingly once dialed back to comfort mode the Stinger GT continues to handle in a sporting manner with the added benefit of soaking up the bumps rather than sending them into your spine. It makes an excellent long distance cruiser that can burst into a full sprint at the drop of a hat. 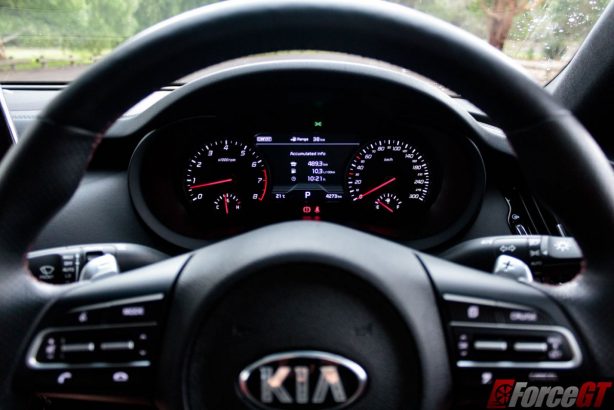 A big engine pumping out big power generally means an equally big fuel bill so how does the Stinger GT hold up when it comes to fuel economy? Officially Kia expect the Stinger GT to manage a combined rating of 10.2L/100km which isn’t far from my tested 10.4L/100km figure. Mind you I had a lot of freeway driving on that tank which gave me a best of 8.1L/100km but around town expect that figure to climb somewhere around the 12-13L/100km mark depending on how heavy your shoes are. One thing to be aware of is when the tank does start to get low the estimated range remaining that’s displayed is more pessimistic than accurate and you can squeeze more out of it than indicated. Only 91 octane fuel is needed to fill up the Stinger GT which keeps your wallet healthy and proves that there’s far more power to be unlocked with a few aftermarket tweaks and 98 octane in the tank.

Once in and around town you’ve got to deal with the size of the Stinger GT, a task that has been simplified by making use of the onboard cameras surrounding the car. Parking is painless as the top down view and parking sensors will have you parking perfectly every time. For a large car even the turning circle is acceptable coming in at 11.2m kerb to kerb. 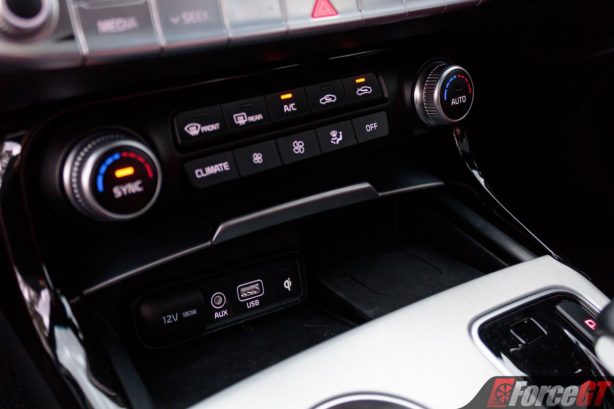 As top dog in the Kia lineup the Stinger GT gets all the toys:

For those who like to get the most from their music, the Stinger GT’s sound system will impress with its clarity and range, making the most of the cabin space and those 15 speakers will heighten any audio experience for sure. 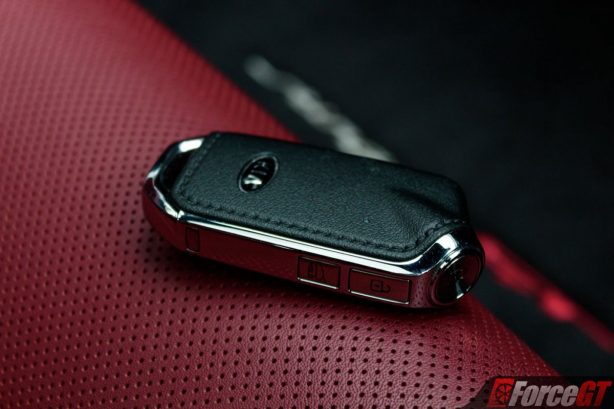 The Stinger GT also has well stocked list of safety features that includes all the big ticket items helping to bring in that 5 star ANCAP rating: 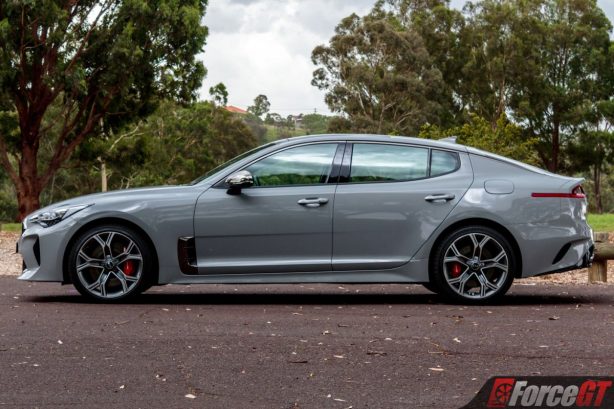 There’s no doubt that the Kia Stinger GT will continue to remain a machine of envy for many and it’s not hard to see why. The team behind the Stinger GT have poured their passion into designing and building something they’re proud of and with the new additions for 2020 it remains fresh and competitive.