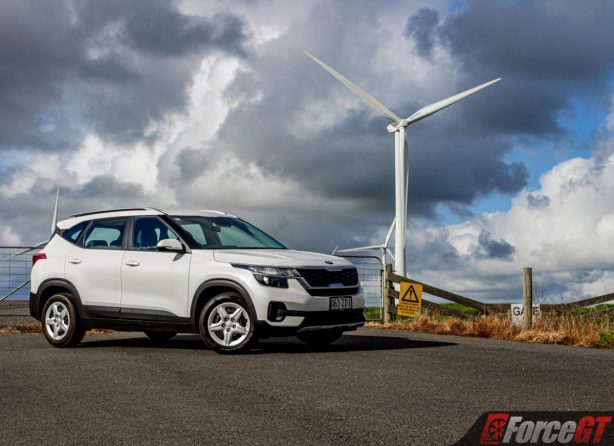 It’s the fundamental design of a car that can make or break it in the eyes of potential buyers. You can throw all the latest tech and toys at it but if the foundation isn’t up to scratch no amount of tech can fix that. That’s why we’re testing the entry level Kia Seltos S as it’s the cost conscious model starting at just $26,690 plus on-road costs. Kia have reserved their more impressive technology and toys for the higher grades but that’s not to say the Seltos S isn’t a strong platform with a few tricks up its sleeve. 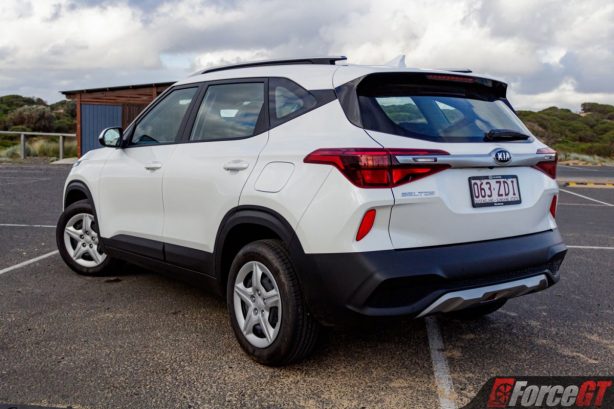 Kia haven’t been afraid to pursue more bold and divisive designs in recent times and the Seltos continues this modern tradition with brash visual design. This time the tiger nose grille has taken on a more angular profile, cutting right into the headlights that taper away into the body work. The grille itself is chunkier with plenty of depth and lined with a cross cut diamond texture that only can be noticed up close.

Floating rooflines can practically be found on most modern SUVs and the Seltos joins the pack with blacked out C pillars enhancing the look. Protective durable plastic coverings line the bodywork at the extremities for scratch protection when going offroad and the mildly pumped guards offer plenty of clearance. You won’t find any fake body molded exhaust tips on the Seltos, instead a clean and tidy view can be had from the rear.

In S trim the Seltos only comes equipped with steel rims which add nothing to its visual flair. The up side is that they measure in at 16 inches and come wrapped with 60 profile tyres which help smooth out the ride. 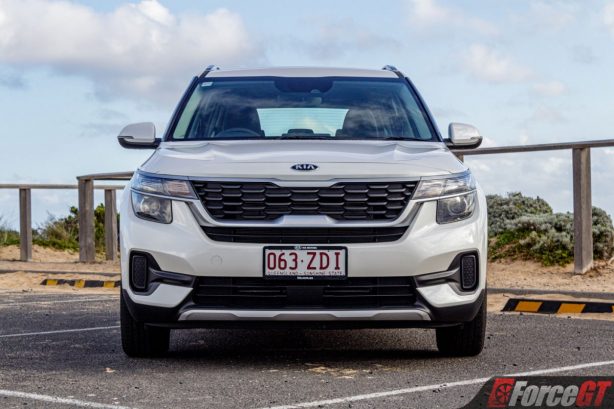 There’s further cost cutting to be found inside starting with the vinyl steering wheel and hard plastic arm rests in the doors. Luckily the noticeably low budget nastiness ends there as the rest of the cabin space is well built and dominated by the generously large 8-inch infotainment touch screen mounted in the centre of the dash. Kia’s infotainment unit is well built, responsive and simple to use. Satellite navigation isn’t included but you do get both Android Auto and Apple CarPlay which offer superior navigation when tethered up. 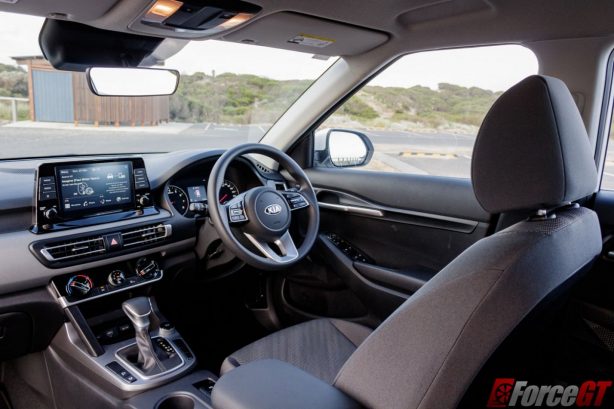 Storage can be found in the usual locations, there’s a pocket just under the aircon controls, dual drink holders mounted in the centre console, door pockets and both gloveboxes which are on the smaller side of things. Visually the Seltos has passed the mark with plenty of design elements being found inside, I’m a big fan of the polygonal shaped speaker grilles which work well with the piano black and brushed metal plastic trimmings.

Visibility in SUVs is always compromised due to the higher ride height and thicker rear pillars. In the Seltos you’ve got to deal with thick front pillars as well. Ordinarily manufactures can negate poor visibility by adding blind spot monitoring along with parking sensors and a reverse camera. Our Seltos S misses out on blind spot monitoring but does gain the other two so parking is hassle free. 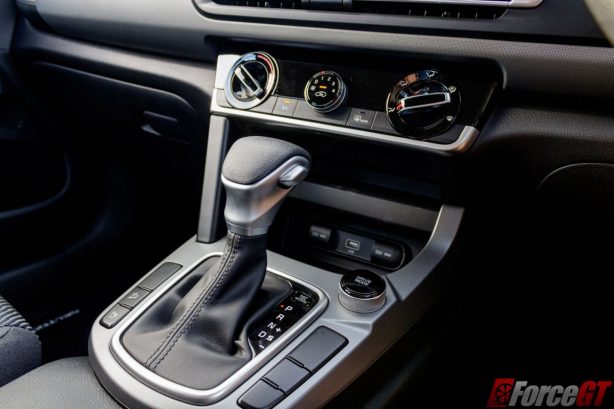 Even though the Seltos is smaller than its slightly larger brother the Sportage, it does a great job of creating a roomy set of rear seats. Head, leg and foot room is excellent and the lack of a rising window line will keep kids happy. The cost cutting crusade makes itself known again with the rear of the centre console which is completely bare, no vents or no outlets to be seen unlike in the higher spec models. Also lacking is a fold down arm rest from the 60/40 split seats. Flanking rear seats come ISOFIX equipped for secure mounting and the rear of the front row seats are finished off with durable plastic to stop them getting torn up over time. 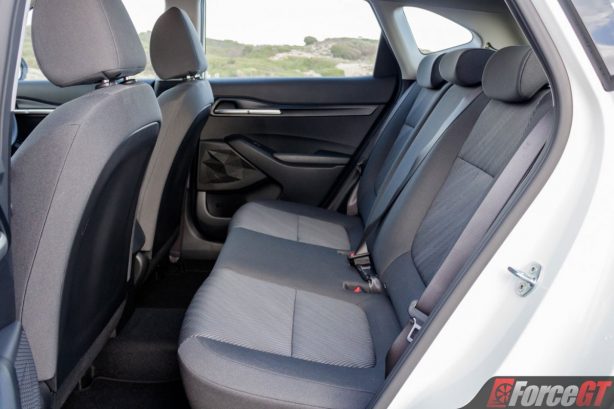 Boot space measures up at a healthy 433 litres, expandable up to 1,393 when your rear passengers get the bus. The flat boot floor folds up to reveal just a space saver spare tyre and beyond that there’s not a whole lot going on in the boot, you don’t even get a parcel shelf, again reserved for higher spec models. What you do get are cargo tie down points and a set of flanking bag hooks that can be found in the side trim. 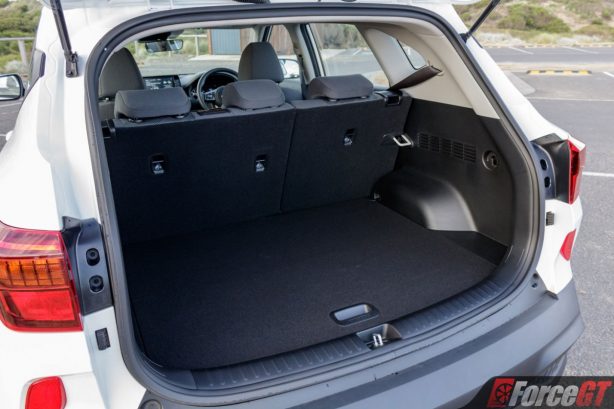 The task of providing power to the front wheels falls to the 2.0-litre four cylinder Atkinson cycle petrol engine which is mated to a CVT. Operating as an Atkinson rather than a traditional Otto cycle means the engine makes less power overall but does so more efficiently. There’s 110kW of power on offer at a rather high 6,200 rpm. Peak torque is reached at 4,500rpm netting 180Nm in total. That’s enough torque and power for daily driving, the Seltos has enough muscle where it matters for the basic task of driving and never felt underpowered. The downfall is it lacks the towing capacity of its bigger and more powerful Sportage brother and the whole range is strictly petrol with no diesel offering.

Rather than a traditional automatic the Seltos is equipped with a CVT which didn’t put a foot wrong for the entire test period. CVT’s are more efficient than traditional automatics and combined with the Atkinson cycle engine the Seltos was able to provide an impressive fuel economy figure of just 5.9L/100km. Most of the test period was done on the freeway but Kia’s claims of 5.8L/100km freeway and 6.8L/100km urban appear to be accurate which makes the Seltos look very impressive when it’s time to fill up. 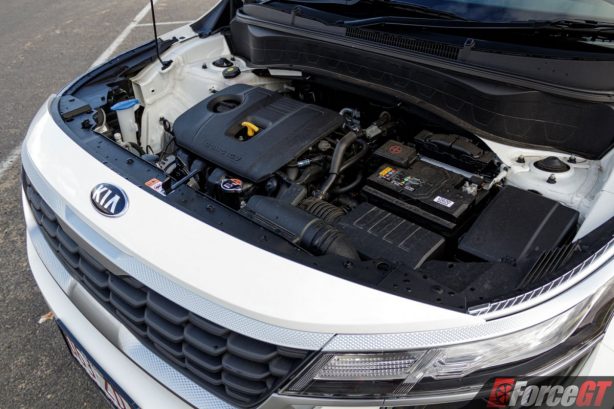 With just a tare weight of 1,355 kg the Seltos can be more nimble than you’d think given its size and stature. The ride is well set for Australian roads, able to smooth out the rough stuff and it does so without resorting to overly soft springs that roll through the bends. The higher profiled tyres certainly help out here and it’s one of the few cases that the Seltos S gains an upper hand on the rest of the range. 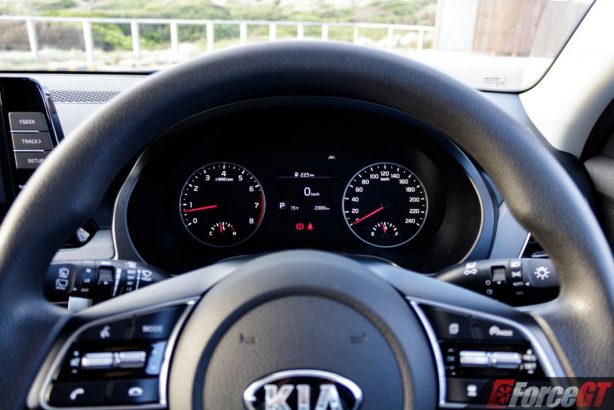 Kia have stowed away all the cool tech and toys for the higher spec models but they didn’t strip absolutely everything out of the Seltos S. Ours came equipped with the $1,000 safety pack that includes:

The radar cruise control makes this one option box that’s worth ticking. The keen eyed among you may have noticed that even without the Safety Pack the Seltos S also comes with forward collision mitigation, the difference being that the Safety Pack adds cyclist avoidance to keep your wheel guards free of spandex and carbon fiber. Blind Spot Monitoring and Rear Cross Traffic Alert are sadly omitted in the Safety Pack, to get those features you will have to step up to the Sport+ or top-spec GT-Line models. 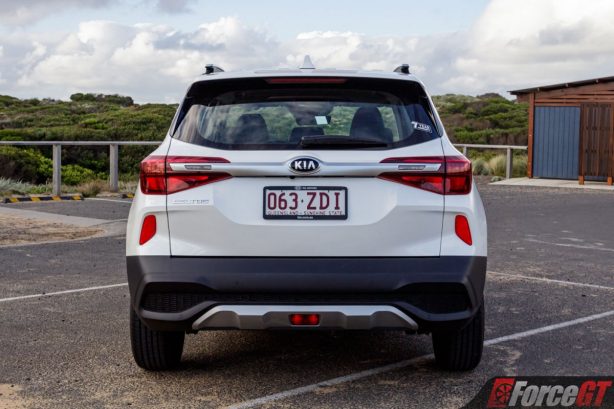 A short feature list was to be expected however there’s still a few notable inclusions that the base spec Seltos S scores:

It’s the lane keep assist that’s the big ticket item here and it works well if a little overly zealous at times. As a feature that’s flicked on or off frequently Kia made the mistake of putting the button for this out of eyesight behind the wheel which makes toggling it a real challenge. Any other position would be an improvement, wheel, centre console or even in the door cluster would be better. When activated there’s a dedicated light on the instrument cluster that goes off and it can become annoying over time as the system kicks in if you’re not bang on perfectly centred in the lane.

Kia have taken inspiration from BMW in how their indicators operate as there are two distinct positions the lever has both up or down. A half push has the indicators turn off after three blinks while a full push keeps them on. A half push in the opposite direction turns them off. Much like the instrument cluster display showing what setting the wiper stalk is set to, I hope this becomes a common feature across the entire Kia range. 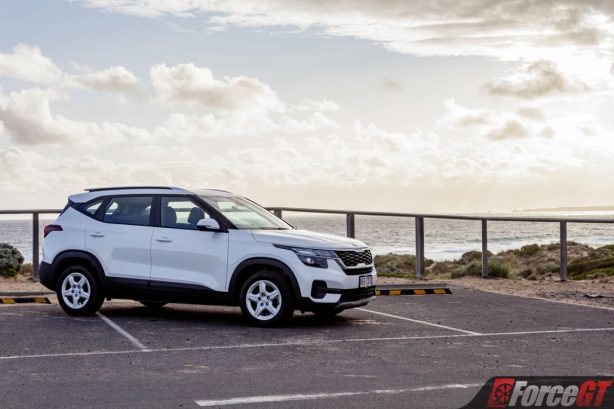 Even though the Kia Seltos S is clearly aimed at fleet rather than private buyers it still puts forth a strong performance for both. It ticks all the boxes that a company is looking for, affordable, good on fuel and practical to keep the accountants happy. For the rest of us the optional safety pack ramps up the safety specs and even sneaks radar cruise control which combines with the standard feature set to create a tempting small sized SUV package that won’t break the bank account.