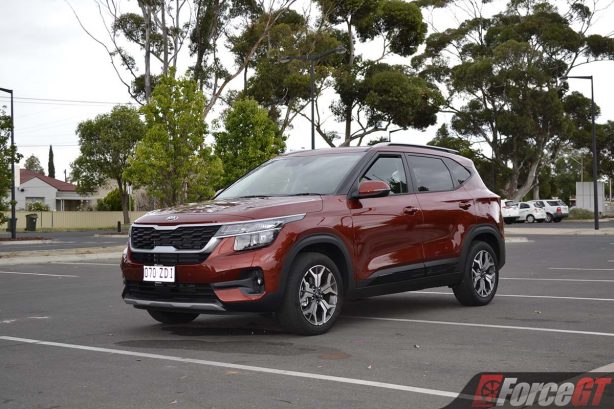 The Kia Seltos is the latest entrant in the sizzlingly hot small SUV segment which is getting increasingly crowded by the day.

Its peers include the highly popular Mazda CX-3, Honda HR-V and Hyundai Kona, all of which are positively capable and have enjoyed significant growth over the last few years.

Indeed, according to Kia’s own estimate, global sales of the segment will balloon from 6.5 million vehicles in 2018 to more than 8.2 million by the end of 2022.

It doesn’t come as a surprise then that Kia is looking to shake things up with its oddly named but stylish baby SUV. The importance of its role highlighted by the fact that Australia is only the third major market in the world for the Seltos after Korea and India.

The brand concedes the Seltos is a little late to the party and plays in one of the most competitive segments but is confident it has the qualities to succeed.

We recently spent a week with the Seltos to find out if the latecomer has what it takes to eke out a niche for itself. 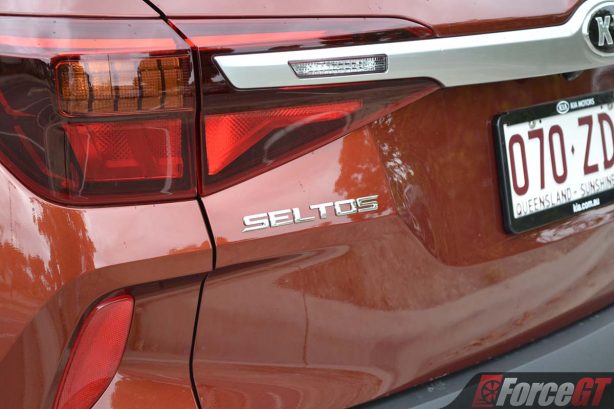 Aimed at the younger, tech-savvy generation, the Seltos is available in four trim levels in Australia: S, Sport, Sport+ and GT Line.

The front-wheel drive S, Sport and Sport+ are powered by a 2.0-litre four-cylinder MPI Atkinson cycle petrol engine producing 110kW and 180Nm, and married to a continuously variable transmission (CVT).

Our Seltos Sport+ front-wheel drive here is priced from $32,990 drive away. 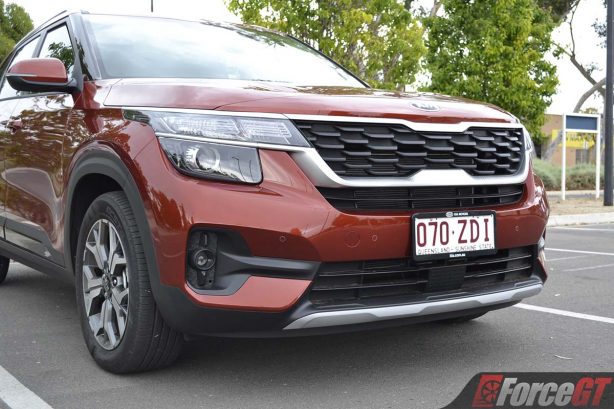 Like most cars coming out of Kia’s factory these days, the Seltos is easy on the eye with a some interesting design details, such as the long bonnet, squared off wheel arches, strong character line on the front bumper and crisp bodywork lines.

However, the Seltos is certainly one of those models that look better as you move up the range, thanks to larger wheels (18-inch on the GT Line) and more bling (LED head and taillights). Nevertheless, the Sport+ here is still a handsome looker despite wearing smaller 17-inch crystal-cut alloys and modest halogen head and taillights.

At the front, the front fascia is dominated by a wide ‘tiger nose’ grille with new diamond-pattern surface sandwiched by a pair of slender daytime running lights (halogen on all but the GT Line). 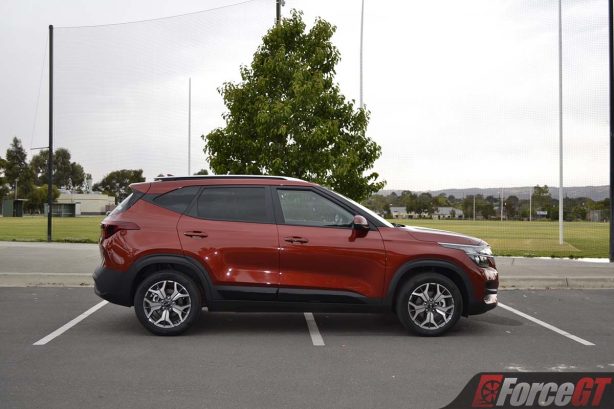 Side on the window line tapers towards the rear of the car, giving the Seltos a touch of sportiness, while the rear combination taillights wraps around to give the small SUV a more sophisticated look.

At 4,370mm long, the Seltos is longer than many of its rivals, including its close relation the Hyundai Kona (205mm longer and 50mm taller). And with front and rear overhangs of just 865mm and 875mm, respectively, it comes with a generous wheelbase of 2,650mm.

To fit in with its young clientele, the Seltos is available in a number of bright colours, including Neptune Blue, Starbright Yellow and our tester’s Mars Orange. 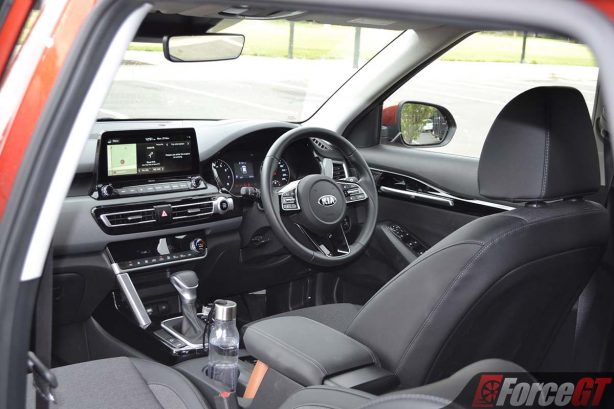 The Seltos’ generous proportions translate to the largest cabin in its class, with front passengers getting up to 1,051mm in legroom, 1,409mm in shoulder room and 1,017mm in headroom.

At the back, rear seat passengers are equally well catered for with up to 965mm in legroom, 1,395mm of shoulder room and 975mm of headroom. The 60/40 split rear seat back can also recline from 26 to 32 degrees for extra comfort.

There are cupholders in all doors as well as a bottleholder in the centre console, along with a storage tray at the base of the dashboard.

Its seat-up boot space of 498 litres is also larger than most of its rivals. 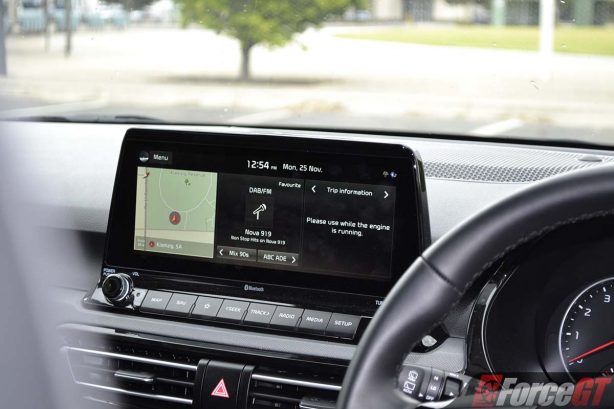 Standing proud on the dash is one of the largest infotainment screens in its class, measuring 10.25-inch in high-resolution widescreen format. It’s the latest-generation from the Hyundai/Kia empire and is one of the best we’ve used so far, with Apple CarPlay and Android Auto, and split screen functions usually found on more expensive cars.

It is responsive, easy to use and also customisable, allowing the screen to display up to three separate applications simultaneously, or if you prefer, a single, cinematic display for the sat-nav, audio, etc.

Speaking of which, the sat-nav screen also displays the car’s speedo, along with the speed limit which is handy. Curiously, the map display also defaults back to 2D once you turn it off. 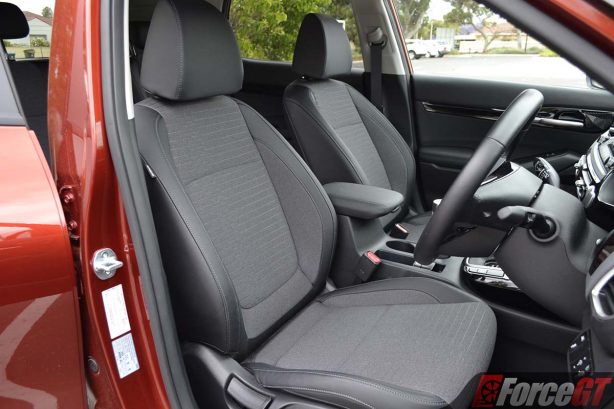 Its cabin ambience feels more expensive that the price would suggest, but it isn’t perfect. The front seats are too large for a smaller frame driver like myself, especially the long base, making it hard to find a comfortable driving position, while rear seat passengers go without air vents.

It also suffers from the same case of cramp foot well as the smaller Kia Picanto, where the tip of your shoe gets caught underneath the dash when moving from the accelerator to the brake pedal (dangerous!).

On the safety front, Autonomous Emergency Brakes (AEB) is standard across the line-up with Sport+ and GT Line featuring Fusion AEB which recognises cars, pedestrian and cyclists.

A handy new Safe Exit Assist function warns occupants of traffic, including bicycles and motorcycles before they open their door into the road.

Finally, the Lane Following Assist feature tracks vehicles and road markings ahead to keep the car in-lane by controlling the accelerator, brake and steering. 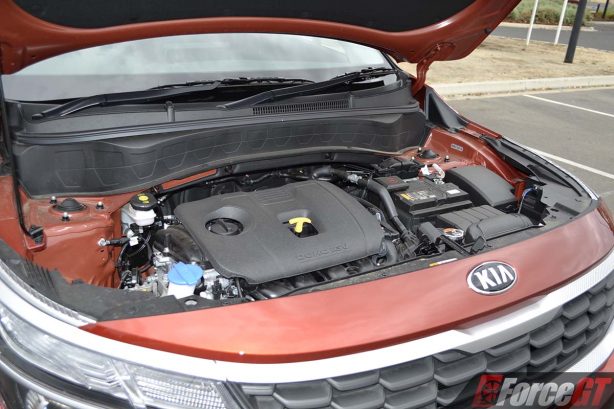 Australian models come with a choice of two aluminium-construction engines.

The 1.6-litre turbocharged four-cylinder petrol producing 130kW and 265Nm of torque is essentially a detuned version of the Cerato GT’s unit. It enables the Seltos to rush from 0-100km/h in a claimed 8.0 seconds and is paired with a seven-speed dual-clutch transmission driving all four wheels.

Our Sport+ front-wheel drive is equipped with an Atkinson Cycle 2.0-litre naturally aspirated petrol engine delivering 110kW and 180Nm of torque, coupled with a CVT.

A Drive Mode Select system allows drivers to choose from ‘Normal’, ‘Eco’ and ‘Sport’ mode, each altering the steering and transmission mappings to suit the drive mode selected. 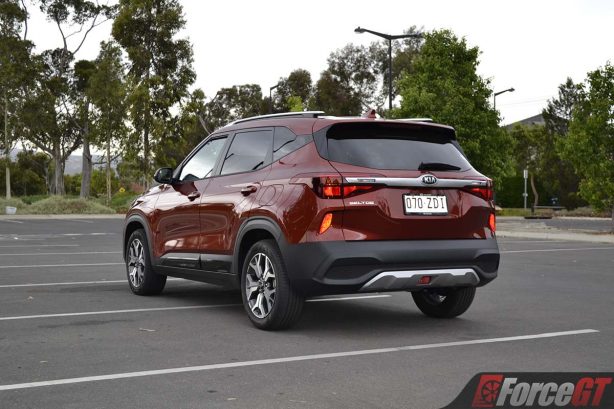 As a the result Seltos rides and handles incredibly well on our third grade roads, ironing out most undulations diligently while retaining a level of road holding more a keen to expensive European SUVs. It’s confident on the freeway and well-balanced around the bends.

Unlike some rivals with overly heavy power steering in Sport mode, the Seltos’ weighting is just right to give you better accuracy while not feeling artificial.

Refinement is also good, with the cabin remaining mostly isolated from suspension and road noise. All variants bar the all-wheel drive models get rear torsion beam suspension, which seems to work well here, too.

Interestingly, for a non-sporting model, the Seltos brakes can feel slightly touchy at lower speeds, requiring judicious application in order not to jerk the car around too much.

Like all Kia models, the Seltos comes with 7 years, unlimited kilometre warranty. There’s also capped price servicing during the warranty period, costing $2,818 for the 2.0-litre variants, and $3,265 for the 1.6 turbo for the first seven years.

Despite arriving fashionably late to the party, the Seltos makes up for it with an all rounded package that brings convincing value, impressive ride and handling and up-to-date technology to the small SUV class.

Together with Kia’s lengthy, market-leading warranty and keen drive away pricing, the Seltos is a compelling package.