We were rather impressed with the Kia Seltos when we drove the mid-range Sport+ front wheel drive earlier this year. It looks good inside and out, handles well and comes with one of the best infotainment systems on a mainstream model.

Now, we’ve been handed the keys to the top-of-the-line Seltos GT Line bringing even more bling and features. So what does an extra $9,000 bring? Let’s find out.

The entry-level variants are powered by a 2.0-litre Atkinson cycle MPI four-cylinder petrol engine producing 110kW at 6,200rpm and 180Nm of torque at 4,500rpm, with power distributed to the front wheels via a continuously variable transmission (CVT).

The mid-range Seltos Sport+ is the only model that straddles between the two powertrain options, with the $33,990 front-wheel drive Sport+ married to the 2.0-litre/CVT combo, while the $37,490 Sport+ all-wheel drive is endowed with the more powerful 130kW/265Nm 1.6-litre direct-injected turbocharged four petrol shared with the two range-toppers and matched with a 7-speed dual-clutch transmission. 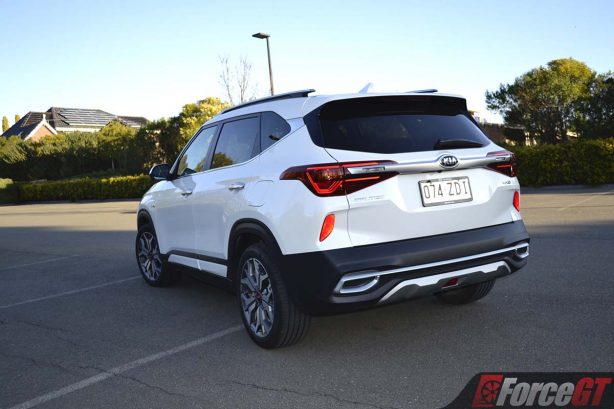 Meanwhile, the $42,990 Seltos GT-Line is propelled exclusively by the turbocharged 1.6, connected to a 7-speed dual-clutch and AWD system.

All prices are driveaway at time of publication, making the Seltos’s value equation even more compelling compared to its main rivals like the closely related Hyundai Kona, Honda HR-V and Toyota C-HR, as on-road costs can usually add $2000-$3000 to the price of a new car.

So, besides the smaller but more powerful engine, the GT-Line also differentiates itself from the Sport+ via a number of external styling enhancements to cement its spot at the top of the rung.

As mentioned in my previous review of the Sport+, the Seltos looks better as you progress up the line-up.

Most obvious is the larger 18-inch all0y wheels shod with 235/45 tyres compared to the Sport+’s 17-inch 215/55. And then there’s the more premium looking LED headlights with LED indicators and daytime running lights, LED fog lights and LED rear combination lights with distinctive light signature. Sandwiched between the headlights is Kia’s trademark ‘tiger nose’ grille in black as opposed to dark grey on the lesser model. 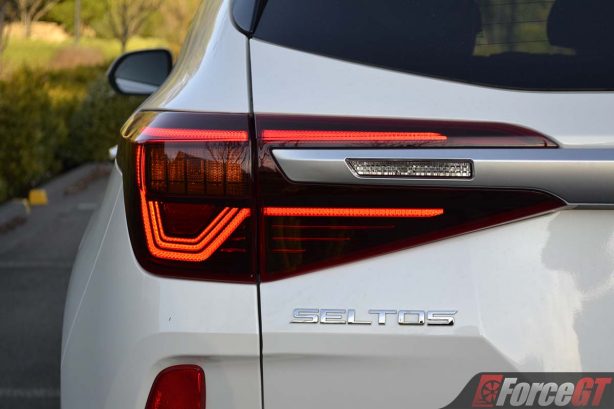 Moving to the sides, the door handles and beltlines are finished exclusively in satin silver compared to the body colour door handles of the others, while you’ll find tinted privacy glass on the rear windows and tailgate.

The GT-Line is also the only variant to be available with a powered tilt and slide sunroof, along with rain sensing front wipers.

Inside, while the 5-seat cabin remains identical across the line-up, there are subtle material and trim differences to set them apart. 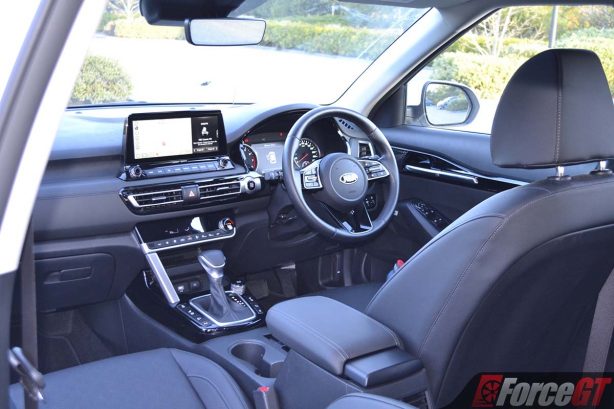 Rear seat passengers are also provided with a rear centre armrest when the middle seat is not in used, as well as the only air-con vents in the line-up.

In cabin storage are identical between the Sport+ and GT-Line, with 2 cupholders at the front and rear, bottle holders on each door, front passenger seat back pocket and a parcel shelf.

All variants (except for the manual) get Kia’s Advanced Smart Cruise Control which, adjusts the car’s set cruise speed based on the vehicle ahead – especially handy in peak hour traffic.

While the Sport+ is equipped with a small 3.5-inch mono-type LCD driver information display, the GT-Line gains a much larger 7.0-inch colour LCD display sandwiched between the analogue dials, as well as a brilliant colour head-up display with digital speedometer. It will also shows up sat-nav direction, and blind spot information in the driver’s line of sight. 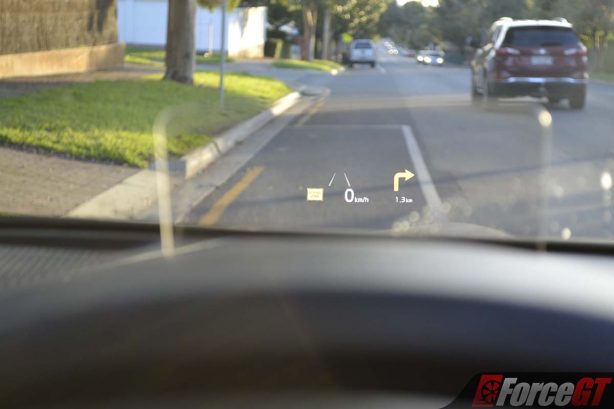 What’s a little contentious is the nightclub-like Sound Mood Lighting, which flickers based on the sound from the 8-speaker Bose stereo system. It’s a little bit too chintzy and distracting for my liking.

What’s more agreeable however, is the extra USB charger behind the centre console, which brings the total tally to 3 as opposed to 2 in the Sport+, along with a handy fast charging wireless Qi smartphone charger.

Like the rest of the line-up (bar the entry-level Seltos S with an 8.0-inch touchscreen), the GT-Line comes with an impressive 10.25-inch touchscreen colour infotainment screen that is smartphone-like responsive in widescreen format.

It’s one of the best systems found on a mainstream brand, with crisp up-to-date graphics that look classy, is easy to read and customisable to display up to three separate applications simultaneously.

The Seltos’ cabin is one of the most spacious in its class, thanks to its generous 2,650mm wheelbase. Front seat occupants get up to 1,051mm in legroom, 1,409mm in shoulder room and 1,017mm in headroom. 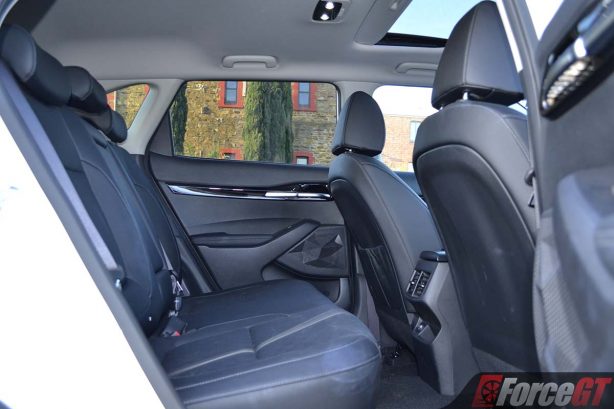 Around the back, rear seat passengers are also provided with up to 965mm in legroom, 1,395mm in shoulder room and 975mm in headroom. The 60/40 split rear seat back can also recline from 26 to 32 degrees for extra comfort.

With the rear seat back up, the Seltos comes with 498 litres of boot space which is also larger than most of its rivals.

Safety wise, the top dog adds Lane Following Assist that makes minor steering adjustments to centre the car within the lane if the line marking on the road is clear.

There’s also a handy new Safe Exit Assist function that warns occupants of traffic, including bicycles and motorcycles before they open their door into the road.

Drivers will want to spend the extra dosh to get the turbocharged 1.6-litre, as it adds a noticeable layer of drivability to the Seltos. With an extra 20kW of power arriving 200rpm earlier plus a healthy 85Nm of additional torque available from just 1,500rpm, the Seltos GT-Line has a sense of urgency that proofs illusive in the naturally aspirated Sport+. 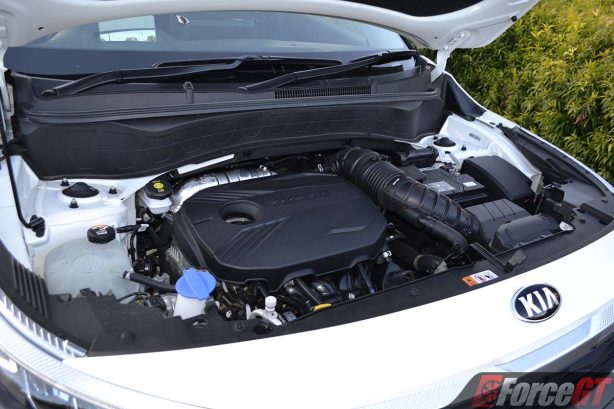 While the 7-speed dual-clutch doesn’t shift as quick as the those from the Volkswagen Group, it’s infinitely more engaging compared to the CVT of the Sport+. Like most dual-clutch transmissions, there’s slight jerkiness at crawling speeds but once on the move, it’s relatively smooth.

Thanks to its Australian-specific suspension and steering calibration, the Seltos rides and handles our roads with aplomb, although the GT-Line’s larger 18-inch wheels isn’t as compliant around town as its smaller wheeled Sport+ sibling. Having said that, it’s never uncomfortable.

All-pawed models are equipped with independent rear suspension as opposed to the torsion beam rear of front-drivers. Compared to the Sport+, the GT-Line seems to handles bends a little tighter, with the AWD system no doubt contributing to the Seltos’ already competent handling repertoire.

Over our weeklong test, the Seltos GT-Line returned a combined average of 8.3L/100km against Kia’s official claim of 7.6L/100km.

As expected, ownership cost is reasonable with the GT-Line’s capped price servicing costing $3,265 for the first seven years.

The Kia Seltos GT-Line is no doubt plush and packed full of toys, putting some entry-level premium SUV of a similar size to shame. However, $9,000 is a big ask over the Seltos+ FWD and if it was my own money, I’d go for the Seltos+ AWD, which comes with the same power- and drivetrain as the GT-Line but is $4,500 cheaper.

For most though, the Seltos+ FWD is the sweet spot, packing all the most desirable features and safety gear, while still being affordable.

Previous Luxury Car Maintenance: Why Your Vehicle Needs To Be Checked Every Year
Next Next-gen 2022 Subaru WRX STI rendered