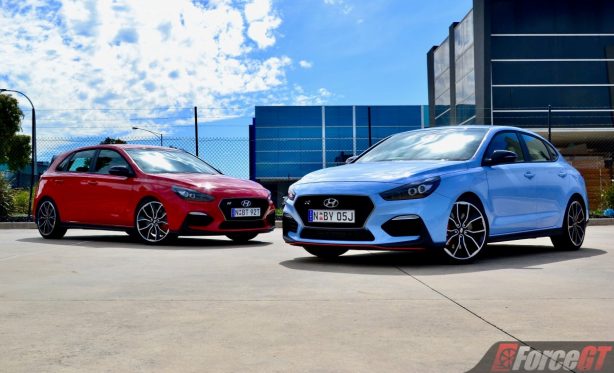 Since bursting into the scene in late 2018, the Hyundai i30 N has been widely regarded as one of the best buys in the performance compact segment. It’s managed to capture the essence of a pure compact sports car while costing less to buy than established rivals such as the Volkswagen Golf GTI and Renault Megane R.S. And the best of all, you get to choose from two different body styles – hatch or fastback, something we have not seen in this category since the days of the third-gen Subaru WRX which came in hatch and sedan form.

With the rest of the competition sticking strictly to the all-too-familiar hatch body shape, it’s good to see Hyundai willing to be a little different by offering an alternative body style, and not calling it a ‘coupe’. But for enthusiasts who have decided on an i30 N, there’s yet another thing to decide – the Hatch or Fastback? And that’s what we are here to explore. 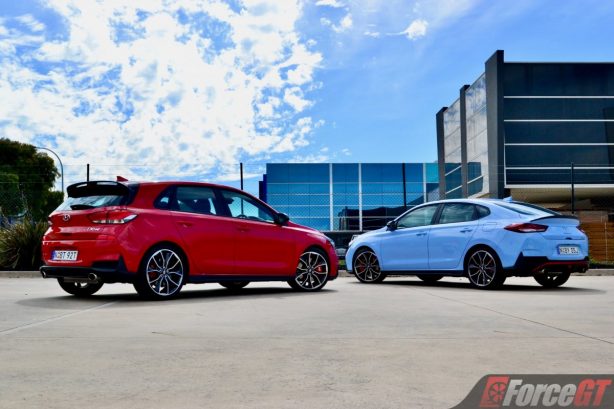 But before we dive into the details, first let’s look at the price. Priced at $40,490 before on-road costs, the i30 N Hatch is one of the more affordable hot hatches in class. Marketed as the more stylish variant of the i30 N, the Fastback commands a $1,500 premium over its hatch sibling, locking in a sticker of $41,990 plus ORCs.

In the whole scheme of things, the price difference isn’t much but if there’s no leeway in your budget, the hatch would have to be it. This would be just fine for many who see the hatch as the hotter, tougher looking variant. Indeed, the i30 N Hatch does have a more aggressive stance especially in the rear with the large roof spoiler and squarer edges in the bumper. The shorter rear overhang of the hatch also gives the impression of wider rear fenders, which add to its athletic looks. 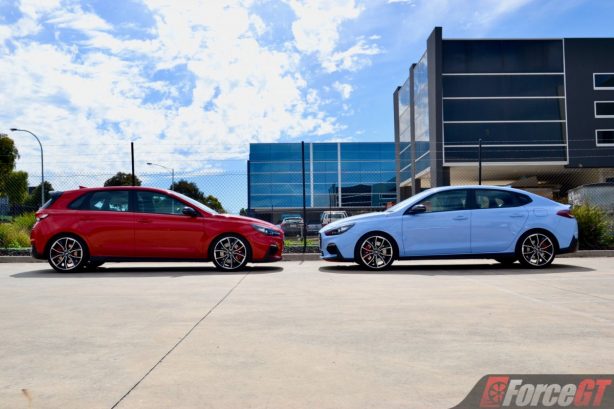 From the front door forward, the i30 Fastback N is identical to the i30 N Hatch. But from that point back, they share no panels. To get that ‘four-door coupe’ looks, the Fastback has a swooping roofline that tapers off gracefully to the short rear deck, in which incorporates a duck-tail boot lid spoiler.

It’s 120mm longer and 28mm lower than the hatch, with the width and wheelbase staying the same. The sleeker profile certainly gives off a more matured looks and sets it apart from the rest. If you are not a fan of hatchbacks, or prefer a more stylish and low slung design, the Fastback is worth the extra spending. 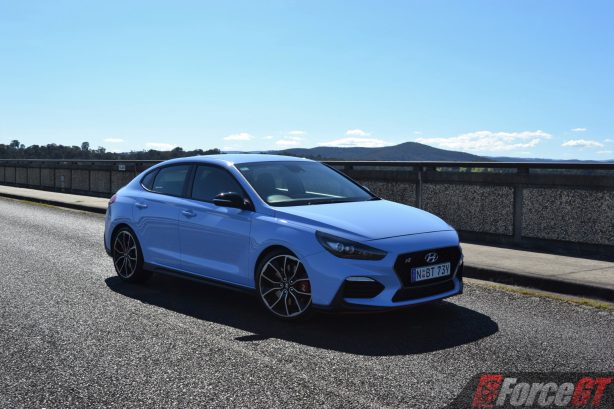 There’s a catch for choosing the Fastback though. The Fastback’s coupe shape inherently affords less headroom for rear passengers compare to the hatch, with the sloping roof line also impeding slightly on rear ingress and egress. It’s a compromise when you are going for the sleeker looks of a coupe, but a minor one given that the rear pews are still nearly as practical and usable as the hatch’s.

The extra length of the Fastback does offer more boot space however, with its 436 litres of capacity quite a bit larger than the 381 litres you get in the hatch. Both cars have a strut brace in the boot which manages to get right in the way when you have the seats folded down.

As far as the rest of the cabin is concerned, it’s identical in both the i30 N variants except that the Fastback gets splashes of red accent on the air-con vent surrounds, and steering wheel and seat stitching. The black and grey interior of the i30 N Hatch has always looked dull for a performance model and it just seems odd that Hyundai chose to lift things up in the Fastback but not the Hatch.

An intuitive and high clarity 8.0-inch touchscreen with Apple CarPlay and Android Auto compatibility are also standard in both versions, as are those brilliantly supportive and comfortable sports seats with embossed N logos, the sports steering wheel with drive mode selection buttons, the metal sports pedals, and the handy race car-like upshift indication lights atop the instrument cluster.

Further equipment can be added with the option of the Luxury Pack, which adds parking sensors, courtesy lights, automatic wipers, power-adjustable front seats with suede/leather upholstery, heated front seats and steering wheel, privacy glass, a wireless phone charging pad, an auto-dimming rear-view mirror, and keyless entry and push-button start – all for a very reasonable $3,000. Fork out another $2,000 and you can add a panoramic sunroof as well. 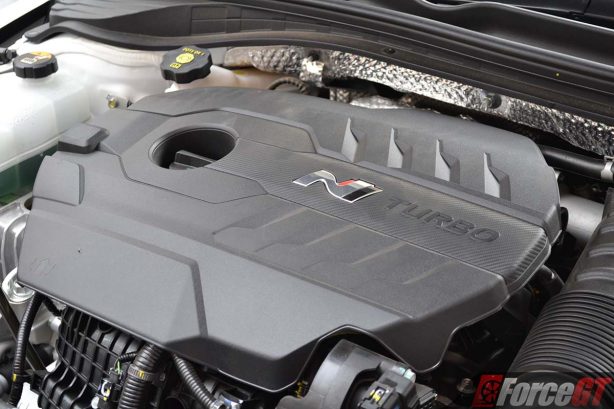 Under the bonnet of both cars lurks the same high-output 2.0-litre turbocharged four-cylinder engine known as the ‘Performance’ tune in other markets. It delivers 202kW at 6,000rpm and 353Nm between 1,450-4,700rpm, aided by an overboost function that raises peak torque to as much as 378Nm for up to 18 seconds at full-throttle.

Power is sent exclusively to the front wheels through a slick and precise six-speed manual gearbox. A dual-clutch automatic i30 N variant has just been revealed and will be available in both the Hatch and Fastback in the first half of 2021.

While 2021 will also see output of the 2.0 turbo raised to 206kW and 393Nm (an increase of 4kW and 39Nm of the outgoing powerplant), the current engine is already a complete hoot. With peak torque on tap from just 1,450rpm, the blown four is incredibly linear and tractable, delivering savage pull with every squeeze of the right pedal in first gear through to fourth. It sounds properly deep and throaty, too. And on downshifts you get all the snaps, crackles and snorts. There simply isn’t a dull moment wringing this thing out.

With the manual gearbox, the i30 N Hatch sees a 0-100km/h dash in a brisk 6.2 seconds, while the Fastback is a fraction quicker at 6.1 seconds thanks to reduced drag afforded by the coupe body’s lower height and reduced rear turbulence. 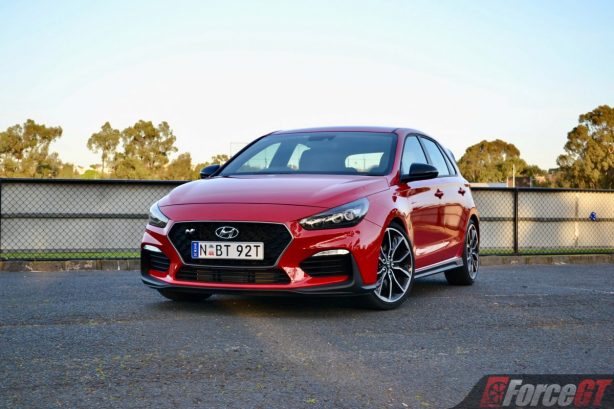 For 2020, Hyundai has standardised the suspension and chassis tune for both the Hatch and Fastback (the Fastback used to have a slightly softer suspension tune for improved ride quality).

Don’t for once think the softened suspension comes at the expense of handling, though. No, because a new front anti-roll bar is also fitted to offset any adverse body roll. The result is a flat cornering stance that isn’t as easily unsettled by mid corner bumps as before. Turn in remains sharp and the improved composure means you can have a better dialogue with the chassis and feel more of the road surface. It’s just brilliant. 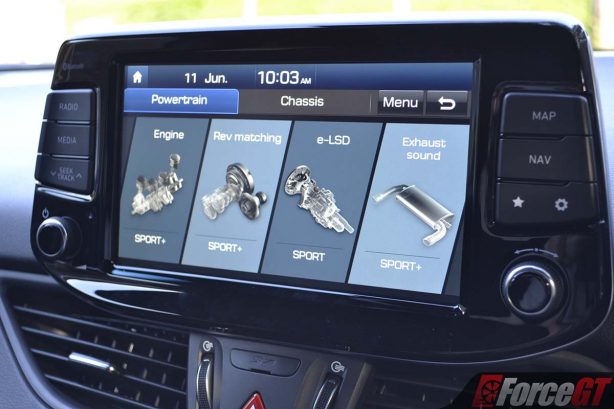 The N custom menu in both the i30 N Hatch and Fastback allows a multitude of settings to satisfy even the most fussy of drivers, but the Sport setting for the suspension seems to suit a twisty back road blast the best, as Sport+ mode can be overly firm for anywhere other than at a track. Sport for the steering also offers the optimum balance between feel and weightage, while Sport+ for the exhaust and differential is best for total driving engagement.

With all settings in Normal – leaving exhaust in the loudest Sport+ mode if you so desire – and the i30 N twins would happily crawl city streets and suburban roads without the bone-jarring ride that you’d normally get in compact performance cars. In fact, the ride almost as compliant as a regular i30 SR, despite rolling on 19-inch wheels with lower profile Pirelli P-Zero tyres. Combined with that slick manual gearbox and light clutch pedal, both i30 N variants are some of the easiest sports cars to live with every day. 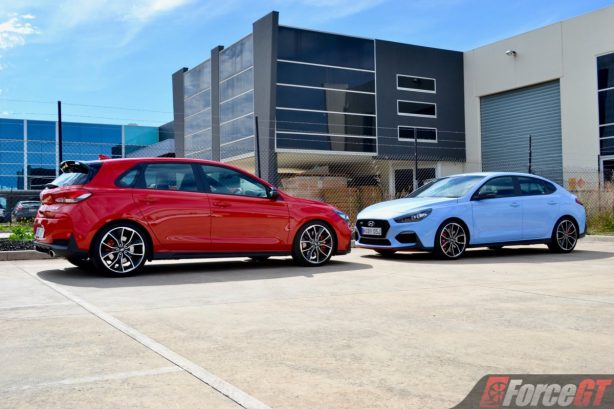 After a week of mixed driving in both cars, the Hatch’s trip computer reports an average fuel economy of 10.3L/100km, while the Fastback manages 10.8L/100km (both cars traversed different routes during their test periods). Against the rated 8.0L/100km, those are some respectable figures given our occasional heavy right foot.

The Hyundai i30 N Hatch and Fastback are amongst the forerunners in their game and represent a solid first effort from the Korean car maker. Regardless of which body style you choose, good times are guaranteed.

The i30 N Hatch proves to be the tougher looking but more conventional of the pair. If the rear seats are often occupied, the more practical hatch cabin will keep those in the back seats happy.

For those who favour sleek style over sporty stance, the i30 Fastback N, even with compromised rear cabin space, is surely worth checking out.

2020 Hyundai i30 N Pricing and Specification