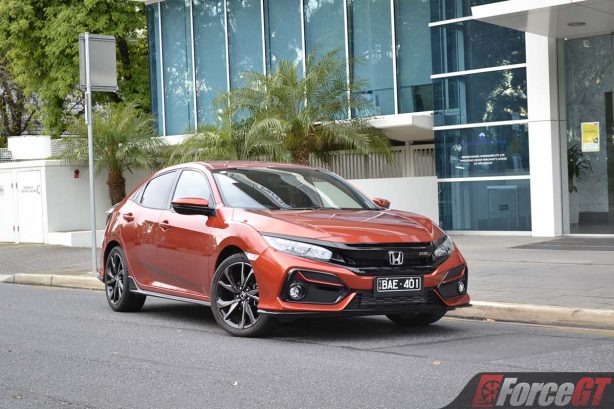 It seems that almost everyone has taken a leaf out of the European car manufacturers’ playbook lately, introducing sports lines that bear an uncanny resemblance to their more expensive and potent siblings, but sans the full-fat power and drivetrain.

Hyundai has found great success in its i30 N-Line and Honda wants a piece of that pie, too, with the Civic RS.

Refreshed for 2020, the Civic RS hatch sits atop the regular Civic hatch line-up and is priced from $34,790 or $4,500 more expensive than the next model down, the Civic VTi-L. Its sticker is also $3,370 more expensive than the Hyundai i30 N Line at $31,420, with all prices before on-road costs. Unlike the Civic Type R which is offered exclusively as a hatch, the RS can also be had as a $700 cheaper RS Sedan.

There are no options because everything is standard, including the eye-catching Phoenix Orange metallic paint that is exclusive to the RS. Together with the unique gunmetal-grey 18-inch alloy wheels, gloss-black lower skirts, rear diffuser and twin central exhaust pipes, the Civic RS hatch certainly looks the part even without the towering rear spoiler of the Civic Type R.

Honda has also done a great job in visually reducing the terrifyingly oversized faux air intakes, both front and back, with a simple body colour strake for the MY2020 model, giving the car a ‘classier’ and less boy-racer look. 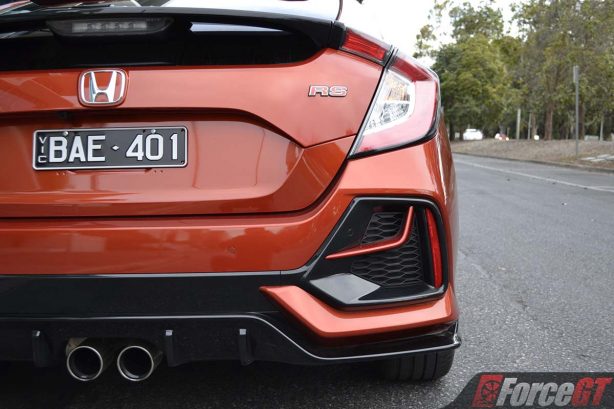 Inside, the Civic hatch’s cabin is still a pleasant place to be four years on, offering plenty of style and technology to keep up with most rivals. There is a mix of soft-touch materials (dash top) and hard, scratchy plastic (lower dash), which are carried over from the pre-facelift model and not uncommon amongst its peers except for a few such as the Mazda3 and the VW Golf. However, on the whole, it’s hard to fault the built quality of the Thai-sourced model.

While the leather appointed front seats aren’t as overtly sporty as those found in the full-fat Civic Type R hot hatch, they are comfortable, supportive and set low to the floor. The cabin certainly projects a sporty vibe the moment you hop in, thanks to red-contrast stitching on the seats, steering wheel, gear-lever sock and door cards, drilled-alloy pedals and black headlining.

Meanwhile, the rest of the cabin is familiar from the pre-facelift model with the driver facing a digital instrument cluster that is simple and clear, while a 7.0-inch touchscreen offering DAB digital radio takes care of the infotainment needs. RS models also score a thumping 452W premium sound system with 10 speakers including a boot-mounted subwoofer. 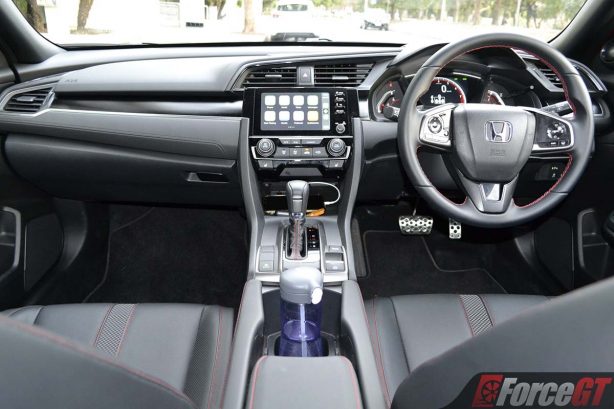 There is no embedded satellite navigation on the head unit, meaning you’ll have to rely on the navigation apps on your phone to find your way around a foreign city. It is however been made more user-friendly with standard Apple CarPlay and Android Auto connectivity. Another downside is the graphics on the infotainment screen, which hasn’t undergone any updates with the facelift and continues with a rather dull background and convoluted menu system.

On the safety front, the MY2020 model now gets Honda Sensing suite of safety equipment as standard. There are 6 airbags (one down on the i30 N Line which includes a driver’s knee airbag), high and low speed Forward Collision Mitigation (AEB), Lane Departure Warning (without steering intervention), Adaptive Cruise Control, front and rear parking sensors, a reversing camera and Honda’s unique LaneWatch left hand side camera. There are three child-seat anchor points and two ISOFIX mounting points for child seats.

What’s missing though is blind-spot monitoring and rear-cross traffic alert.

Like the Honda HR-V and now defunct Jazz, the Civic’s cabin feels roomy, with good headroom and all round visibility. Rear legroom is also good although the hatch’s sloping roof line can impinge on head room for taller rear occupants. 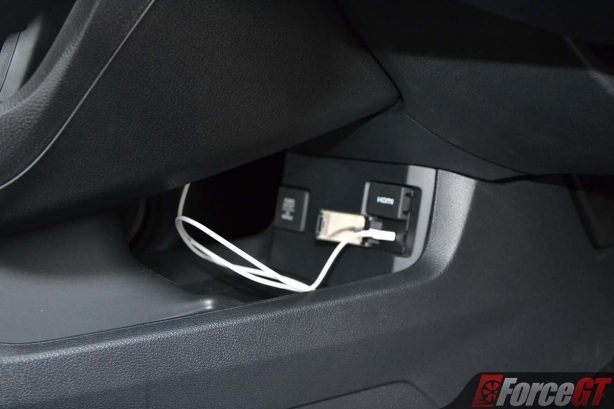 There are clever design tricks within the cabin, too, such as the twin-deck centre console, which enables you to hide the phone cables under the console and feed them up to the smartphone tray, but is a pain for testers like us who jump in and out of different cars regularly.

Underneath the front centre armrest is a massive bin capable of storing a week’s worth of ration for the COVID lock down, along with a 12V power outlet. However, there are only two USB ports in the cabin.

Further aback, the Civic hatch sports just 330 litres of boot space – or a fraction bigger than that in a Kia Rio small hatch – with the rear seats up thanks to the space devouring central exhaust pipes. However, this expands easily to 1,580 litres by dropping the 60:40 split rear seats although there’s a big drop from the lip to the floor.

What I like most is the clever retractable ‘tonneau’ style parcel shelf, which extends from and retracts into a box on the left hand side of the boot. It means you no longer have to find a spot for a bulky parcel shelf as well as trying to accommodate your belongings. It’s a fantastic idea! 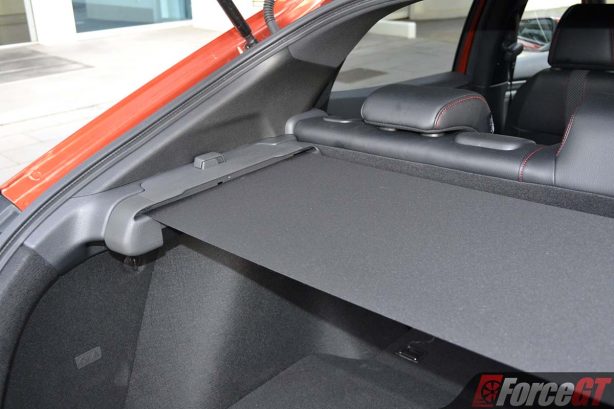 Drive is directed to the front wheels via a Continuously Variable Transmission that isn’t exactly the last word in sportiness. You do however get a pair of paddle shifters that allow you to ‘manually’ step through a set of pseudo gear ratios and a Sport mode that keeps revs high between ‘changes’ but they don’t add any sportiness to the experience, except perhaps a dash more engagement.

It’s a shame because the punchy and high-revving nature of Honda’s VTEC engine would have been a much better match with either a good torque converter auto, or a speedy dual-clutch like the i30 N Line.

Despite the drivetrain shortcoming, the RS does feel sportier on the move than the regular model, with a well-weighted, crisp and communicative steering, and good throttle response. 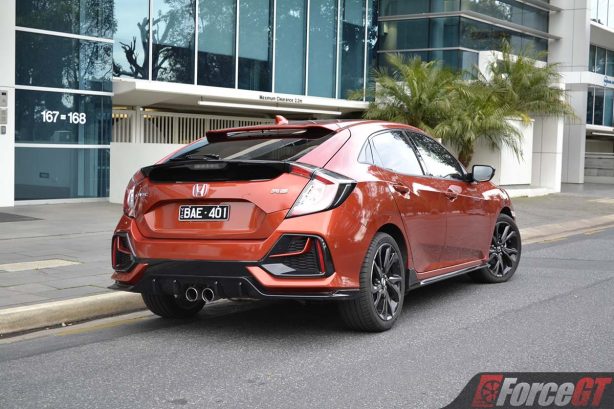 Unlike its rivals such as the i30 N Line and Kia Cerato GT, the Civic RS sits on the same suspension as lesser models. As a result, it rides better than the Hyundai and in particular, the Kia, which has an unnecessarily hard suspension tune and punishing ride. The 18-inch wheels handle most urban potholes relatively well, too.

And while it might not be as sharp around the bends against the Korean duo, the Civic RS does hold its line relatively well with good body control and well managed understeer.

The 1.5-litre turbo also sounds way better than the 1.8-litre in lesser Civics and is certainly more refined. Honda says the RS will return 6.4L/100km on the combined cycle. Our weeklong test with about 90 per cent of urban commute, along with some aggressive weekend B-roads driving saw the trip computer return a reading of 8.3L/100km.

The RS needs a visit to the dealer every 12 months or 10,000km, whichever comes first, with each of the first seven services costing $297. You’ll pay extra for things like brake fluid and various filters.

The Honda Civic RS Hatch is certainly the pick of the Civic range, blending comfort and practicality with a splash of sportiness to keep things interesting. Its clever and spacious cabin is one of the most user-friendly in its class.

The 1.5-litre turbo four is punchy and refined but let down by the CVT transmission that doesn’t bring out its best.

And while Honda Sensing is now standard, it lacks blind-spot monitoring and rear cross traffic alert that are standard on most of its rivals.

Nevertheless, with good build quality and Honda’s excellent reliability, the RS should be on your shopping list if you’re in the market for a sporty hatchback.