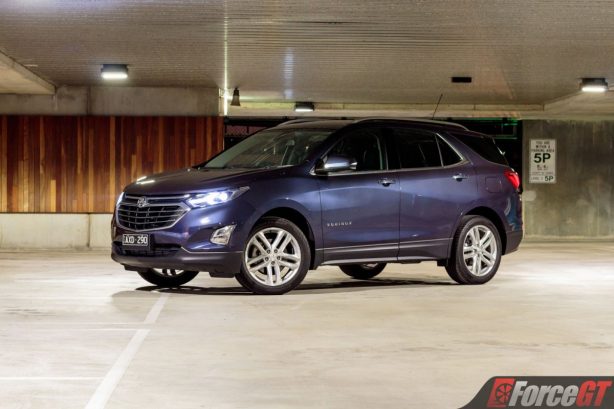 The humble 5 seater SUV is the bread and butter of any major manufacturer which is why it’s so important to get the formula right. The competition is fierce and Holden has the Equinox representing them in this segment. We’ve got our hands on the upper spec LTZ with the AWD drivetrain to discover if the Equinox can apply pressure on the established players and make a case for itself as the ideal medium sized family SUV. 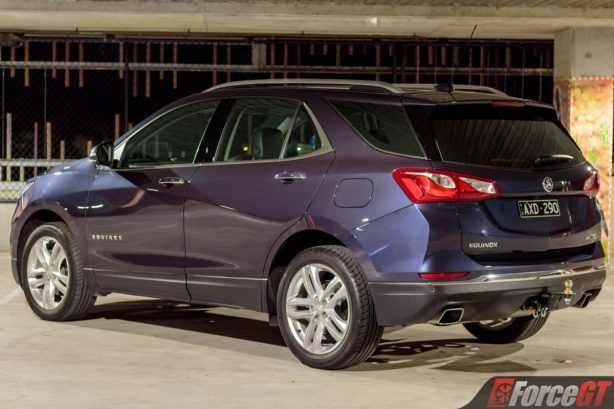 On the streets or parked out the front of a trendy cafe, the Equinox isn’t going to be turning heads, nor will it turn them away. It has a reserved style that allows it to blend in at the expense of having character. The Equinox designers played it too safe and you get the feeling that they intend for the Equinox to have a long model life just like its predecessor the Captiva. Chrome trimmings have been used for both the front grille along with the window trimmings and there’s plenty more inside. 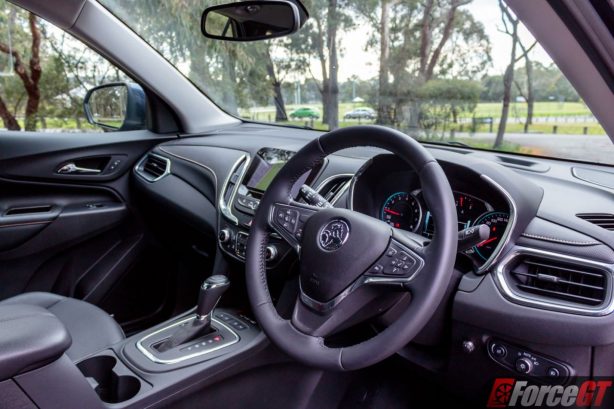 You can find the door handles, vents, gear shift base, steering wheel and even the instrument cluster all get the bling treatment and it works well to break up the assortment of black and grey interior trim. The use of cheap thin plastics found in the Captiva have been done away with for more durable quality plastics and visually everything looks appealing, the mix of design elements has the interior provide a sophisticated environment to spend time in. There’s an abundance of practicality as well, the centre console opens up to reveal a large volume of space and there’s a storage net tucked in on the passenger side complimented by twin drink holders and door pockets for more storage. 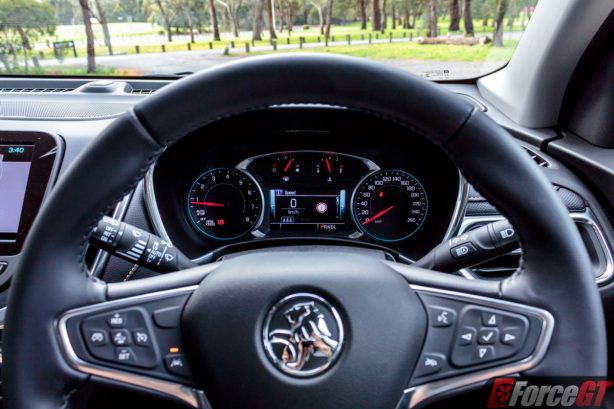 The rubber buttons used on the steering wheel do feel out of place and aren’t intuitive to use as they all have the same feel making it tough to know which button is being pressed without visual confirmation. Another oddity is the sports shift for the gear selector which is operated by buttons mounted at the top of the stick that don’t feel up to par.

The Equinox is put together in Mexico and the build quality is generally acceptable with the exception that a few parts of the trim didn’t fit in place perfectly, teething problems for a new model that should definitely get some attention down the line. 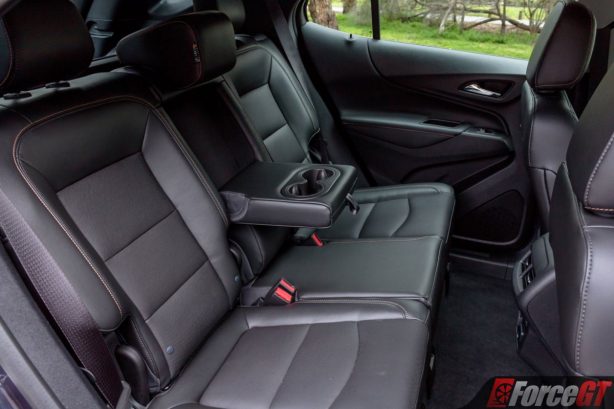 Passengers in the rear have plenty to be happy about as there’s an abundance of head and leg room and the flat floor won’t have a third rear passenger cramp up the foot space either. The rear of the centre console houses air-con vents along with heated seat controls for the two outboard seats. The Equinox also comes with a 230V inverter that sits at the base of the centre console, a feature that’s sure to get used for any camping trip.

Boot space measures up at a very healthy 846 litres with expansion up to a class-leading 1798 litres after you drop the 60/40 seats. To do so requires the removal of the centre headrest if you want them to go completely flat, an annoyance also shared with the Holden Acadia and hopefully it doesn’t become a trend with the remaining line up. The relatively high sitting boot floor gives easy access for loading and unloading bulky and heavy items and when lifted up reveals further storage below.

The compromise made to give all this space is that the Equinox only comes with a space saver spare. In LTZ spec the Equinox comes equipped with hands free boot operation and the ability to restrict how high the boot opens, great for low ceilings. 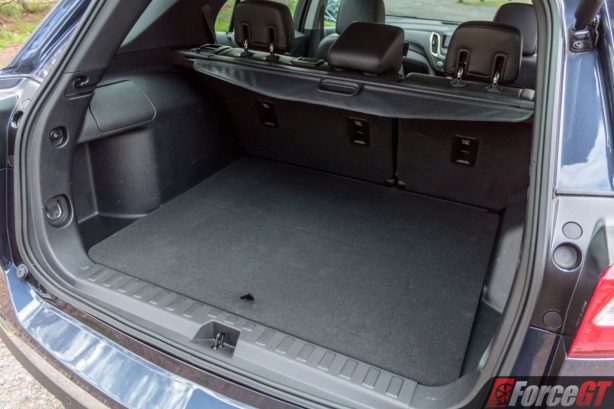 As with most Holden’s you can expect a meaty engine to be found under the bonnet. The 2.0-litre turbocharged four-cylinder petrol unit is good for a solid 188kW of power at 5,500rpm and an equally chunky 353Nm of torque from 2,500 to 4,500rpm, making the Equinox one of most powerful medium SUVs in class. The strong power is, in some cases, too much for just the front tyres to handle, requiring the need for all-wheel drive engagement to keep it all under control when putting the power down from a stop or on rough roads.

After a solid week of testing around town and out on the freeways we managed to rack up a 10.2L/100km economy figure against Holden’s suggested 8.4L/100km. With the AWD kept off and a less heavy right foot we’re sure that’s an achievable figure. The Equinox is equipped with an automatic stop and start engine system that has been integrated well offering near seamless operation. 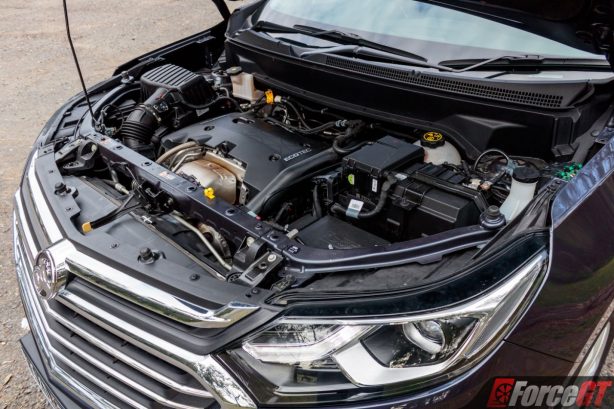 Keeping the near 1.7 tonnes of mass under control falls entirely to the Equinox’s suspension setup and it’s here that Holden have done an impressive job. The Equinox provides adequate feedback through the wheel to the driver and when it comes time to work your way through a few bends, it remains composed limiting roll. The ride is on the firm side which is ideal for urban roads where the majority of SUV’s spend their lives and still capable enough for those less than ideal country roads. 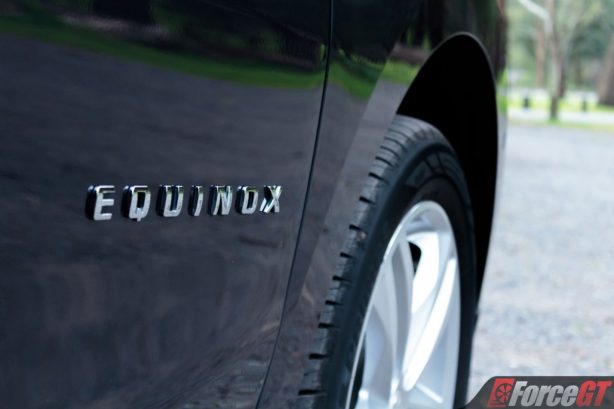 In LTZ spec the Equinox comes very well equipped with a number of features that shine above its competitors. First of which is the GPS satellite navigation system that’s displayed on the easily accessible and bright 8-inch display mounted flush into the centre dashboard. Wireless charging exists for all supported devices below the dual zone air conditioning controls and there’s room enough for all but the biggest of phones.

The drivers seat is electronically adjustable with memory settings and an easy exit mode that reclines and slides the seat out of the way for improved accessibility. Automatic LED headlights support both electric level adjustment and high beam auto dipping. For those cold winter mornings the heated door mirrors ensure visibility while the heated seats both front and rear keep everything comfortable for driver and passengers alike. 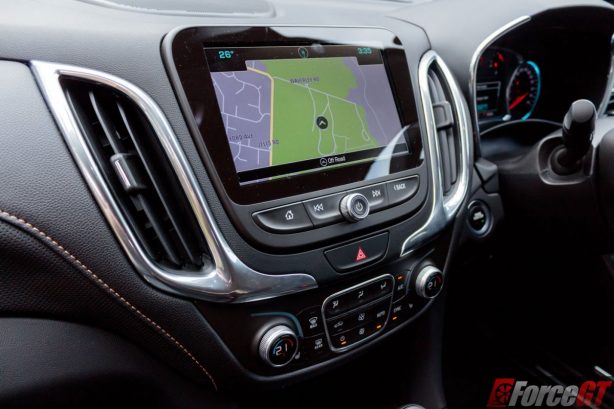 The infotainment system is DAB+ enabled and the 6 speakers plus amplifier do a great job of providing clear punchy audio throughout the cabin space, both Android Auto and Apple CarPlay are available along with the usual AUX and Bluetooth connectivity.

A full 5-star ANCAP safety rating has been afforded to the Equinox and it’s not hard to see why, there’s a good selection of active safety gear included:

The safety alerts are cleverly integrated right into the seat, you’ll feel a directional vibration based on where the hazard is and it’s far more noticeable than a simple blinking light or warning chime. The omission of radar cruise control or even speed limited cruise control is a bit of shame, however I’m glad to note that the lane keep assist system is one of the better units that won’t intrude at every opportunity, rather it works away in the background only coming to your aid when required. 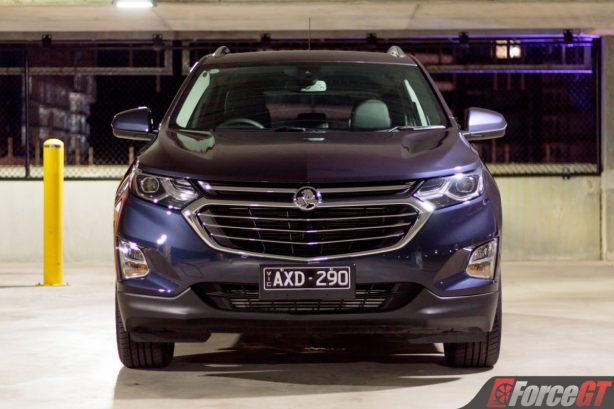 The Holden Equinox in LTZ trim represents great value for money with its strong emphasis on safety and extensive feature list. A strong focus on practical design makes it a great urban commuter and the addition of AWD and all that cargo capacity will have it ready for a few weekend adventures too.