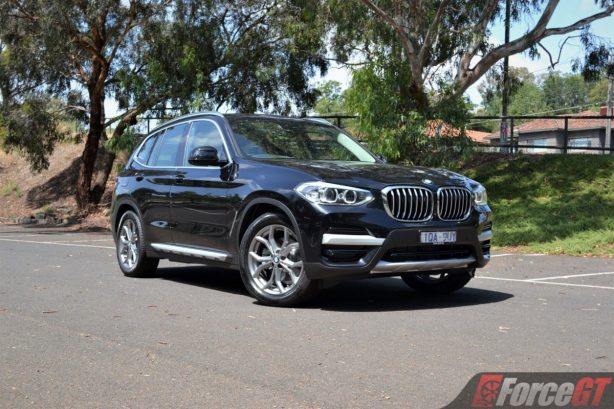 BMW was the first premium manufacturer to produce a mid-size luxury crossover with the original X3 in 2003. Despite having the new segment all to its own, the first X3, with its quirky styling and unresolved ride, didn’t do BMW much good. What it did though, was spawn an explosion of quality rivals that later swamped its sales. The second-generation X3 was a much better effort and had seen better success but even that wasn’t enough to stop the increasingly tight competition.

Today, the Audi Q5, Mercedes-Benz GLC, Lexus NX, Alfa Romeo Stelvio, Volvo XC60 and Land Rover Discovery Sport are some of the players in the highly varied segment pioneered by the X3. And it’s all up to the latest, third-generation X3 to face them off.

From the outset there’s a variant for everyone, with the updated 2020 BMW X3 range consisting of five model grades, spanning from the entry-level X3 sDrive20i to the range-topping X3 M40i, bridged in between by the xDrive20d, xDrive30i and xDrive30d. And for those who take no compromises, there’s the flagship X3 M Competition, too. 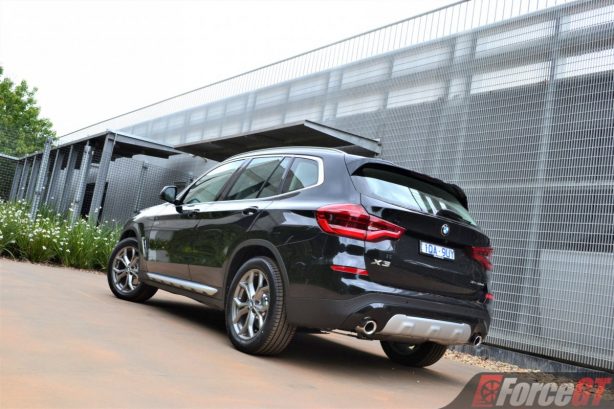 With the design of the Bangle-era original X3 proved to be too radical for its own good, BMW has played it safe with subsequent iterations of the X3. The second-gen model was conventional, to a point it was a tad bland. For this latest model, BMW has continued with a conservative approach but ensured a stylish outcome.

With a strong family resemblance to the rest of the BMW SUV line-up, the new X3 boasts a bold front fascia characterised by the large but still proportionate double kidney grille. Like the previous model, strong lines and creases sweep backwards from the nose and wrap around the car, only this time they flow harmoniously for a much more resolved look. The rear end features wider and slimmer 3D look taillights that blend well into the contemporary and contoured design of the rear. 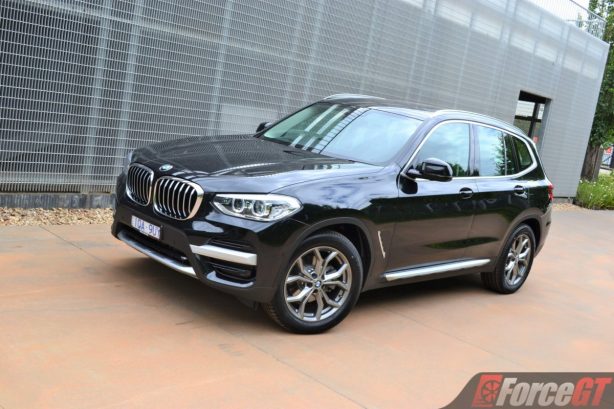 You can choose between the xLine or M Sport trim (our tester is the former) but as long as appearance goes the M Sport is a much better looker with the sportier M Sport bumpers, side sills and body-coloured wheel arches.

Much of a car’s feel good factor comes from the interior and the X3’s cabin certainly radiates a good dose of it. A big step up from the chunky, heavy-handed design of the previous model, the new cabin is modern, elegant and functional. The layered dashboard remains but is much cleaner and better integrated. There’s also no shortage of bright coloured trim inserts to elevate cabin ambiance, through it still falls slightly short on glamour compare to the interiors of Audi and Mercedes-Benz. 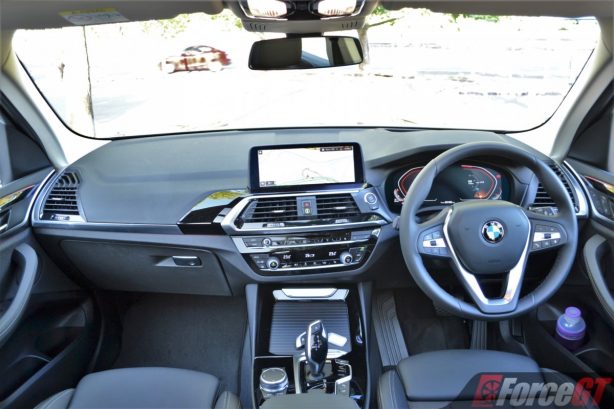 As expected from BMW, materials are first rate and as evident by the high quality piano black trims that are not as susceptible to scratches as those in rival brands. The half leather/fabric upholstered seats also have a nice texture to them, but the Germanic feel on the seat cushion means they are not as soft as we’d like. The seats in a Mercedes GLC or Lexus NX certainly mold to your body better.

Perhaps the best part of the interior is BMW’s brilliant iDrive system and that ultra high clarity 12.3-inch infotainment screen. It remains one of the most user-friendly and effective systems in the segment, with an accurate and usable voice command function that gets your instructions most of the time. It gets Apple CarPlay as standard but Android Auto is yet to be supported. There’s also wireless phone charger fitted as standard. 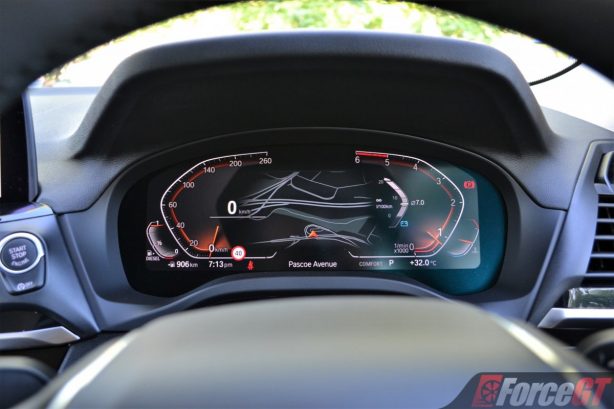 While it may not be as customisable as Audi’s virtual cockpit, the fully digital instrument binnacle with its fancy graphical display is a much welcomed update to the refreshed X3. Credit also goes to the head-up display (HUD) that, unlike many other systems we have tested, doesn’t fade behind polarised sunglasses or on a sunny day.

The X3’s vast glasshouse makes all round visibility one of the best in class, while the high seating position offers a commanding view over the road. Rear seat space is also one of the most generous in the segment, with passengers in the back able to enjoy good legroom and headroom. 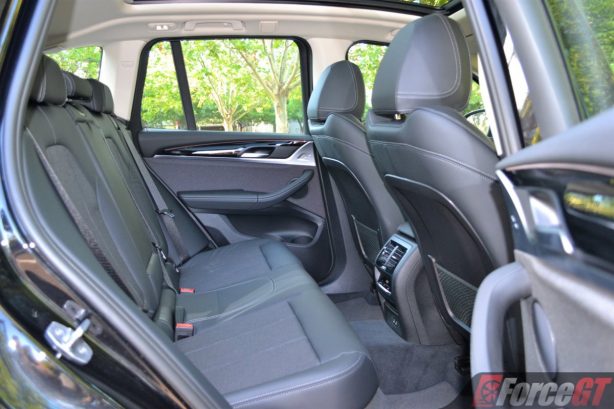 Further aback, the boot is square and flat with a sizable 550 litres of capacity. Drop the 40/20/40 split folding rear seats and this space expands to a voluminous 1,600 litres, one of the biggest in class. Further storage space for small odd items can be found under the boot floor.

The BMW X3 line-up is powered by a range of turbocharged four and six cylinder engines. Both petrol and diesel variants are available. Our X3 xDrive20d is motivated by a 2.0-litre turbo diesel engine developing 140kW of power at 4000rpm and 400Nm of torque between 1750-2500rpm.

While the diesel is never going to set your pulse racing, it does deliver impressive grunt off the line with very little lag. On the move you always have access to the strong torque in the midrange which makes for effortless overtaking and rolling acceleration. 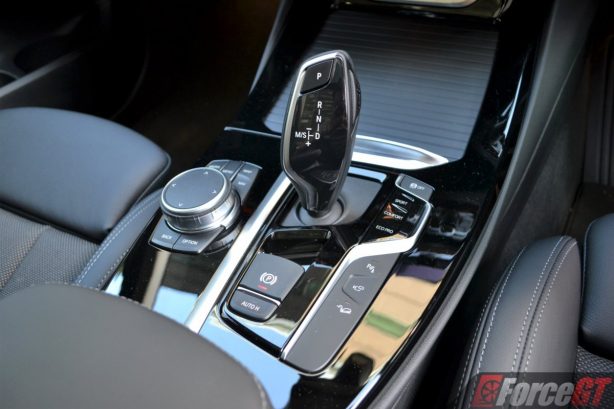 Impressive for a diesel, there’s very little clatter in the cabin and on cruise it’s near silent. On the outside though there’s no hiding its oil burner vocals as it’s quite loud. But overall the diesel is a smooth and refined unit.

Just as buttery is the 8-speed automatic transmission, though in Comfort mode it’s a tad slow to kick down when you plant your foot on the pedal. Flick it to Sport and it’s much more eager to drop a few cogs.

The X3 is a soft-roader and all variants get BMW’s xDrive 4×4 all-wheel drive system. While owners are unlikely to spend much time off road, the X3 is competent on the gravel with the system intelligently vectoring torque to the wheels with the most grip to optimise traction. And the extra grip helps getting the power down on wet roads, too.

Based on BMW’s latest CLAR platform which underpins everything from the 3 Series to the X7 (and even the Toyota GR Supra), the X3 is some 55kg lighter than the previous model despite having similar footprint. The weight savings, though not significant, ultimately translate to better handling. It’s also good to see that BMW has managed to maintain its hallmark 50:50 front to rear weight distribution even on an SUV. 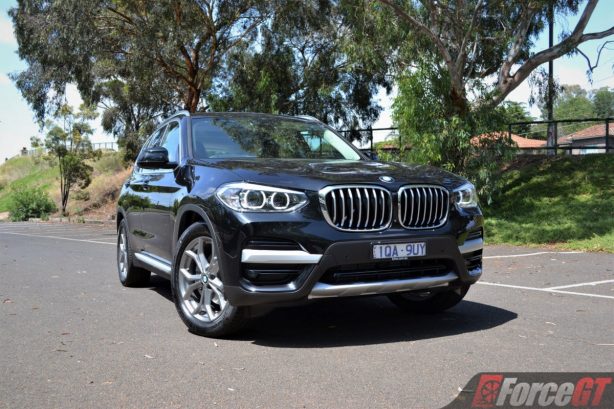 The X3 is an excellent handler, with car-like dynamics that aren’t too far off those of the 3 Series. Around corners, the X3 stays composed and flat, despite its high ride height. The all-wheel drive system serves up a tonne of grip, which further helps in cornering stability.

The compromise of great handling is a ride that’s skewed more on the firmer side. More noticeable on open roads than in the city, the ride doesn’t seem to settle even at above 80km/h. It has a tendency to feel overly bouncy on rippled country roads. For a non M Sport model, we’d wish for a more compliant ride.

It fairs a lot better in noise suppression however, with the cabin well insulated from road and wind noise, giving it a quiet ride across the board.

Unlike most manufacturers, BMW offers condition-based servicing for its vehicles. Rather than having a set servicing schedule based on distance or time interval, the X3’s servicing is determined based on how the car is driven. This means servicing is more frequent if the car is often used for short distance travel or in extreme cold condition, or less frequent otherwise.

The BMW Service Inclusive Basic package covers your scheduled servicing needs for 5 years or 80,000 km, whichever comes first. With packages for the X3 starting at $1,850, the Basic package includes your annual vehicle checks, oil changes, all filters, spark plugs and labour costs for the duration of the package. 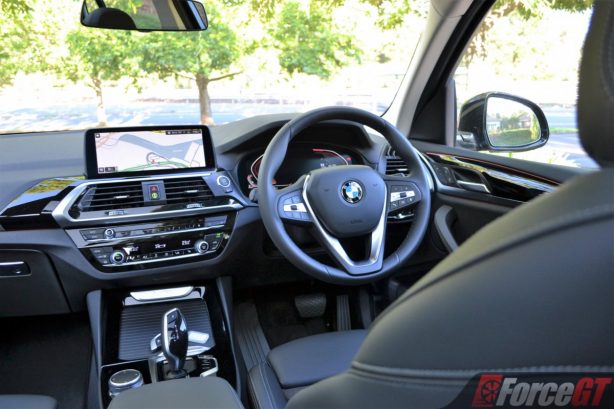 Being a diesel, the X3 impresses with excellent fuel economy. If you’re careful with your right foot, it’s capable of over 1000km on a single tank (68 litres). Over our week-long test, we averaged 6.8L/100km on the trip computer, not far off the rated figure of 5.7L/100km.

As one of BMW’s most important SUV models, the new X3 is as complete as a package as it has ever been since its inception. Packing everything from contemporary looks and a plush interior to a gutsy powertrain and sharp dynamics, the X3 is now finally a strong contender in a segment it pioneered.