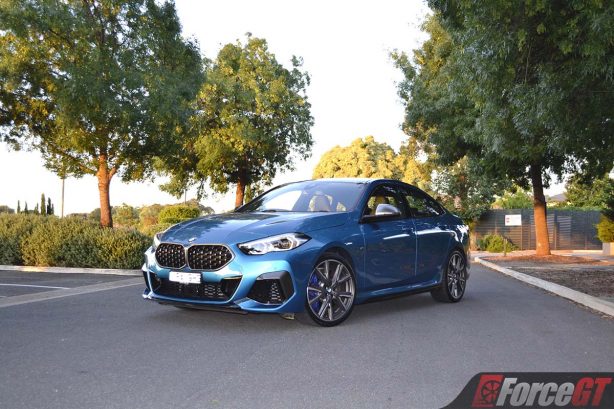 A koala with her baby clinging to her back crosses a road and climbs up a eucalyptus tree. She then spends the next few hours feeding on its dry, leathery leaves – her only source of food. Eucalyptus leaves are very low in protein and toxic to many animal species but the koala is uniquely adapted to digest them. In doing so, the koala has ensured there is little competition for its food source.

BMW once proclaimed they would never build a car that isn’t driven from the rear wheels. The M140i was a wonderful car – great handling and entertaining dynamics in a small package that only a rear-driver could provide – but it was heavy, expensive and not as roomy compared to its newer, and front-wheel driven competitors. As a result, sales suffered.

Like the koala, the company needed to adapt to survive the ferociously competitive automotive jungle, and so, the reinvented 1 Series and 2 Series range were born – both predominantly front-wheel driven, with the range-topping (for now) M Performance M235i offering all-wheel drive.

It’s not hard to see why most manufacturers are headed in the same direction for their more affordable range of performance machines. While the rear wheels are still the desired source of propulsion on the track, in everyday driving, a well-sorted all-wheel drive system can provide just as much fun without too much compromises in dynamics.

Perched at the top of 2 Series line-up, the M235i xDrive Gran Coupe is a direct competitor to the popular Mercedes-Benz CLA 35 AMG 4MATIC, an all-wheel drive variant of the front-wheel drive CLA. 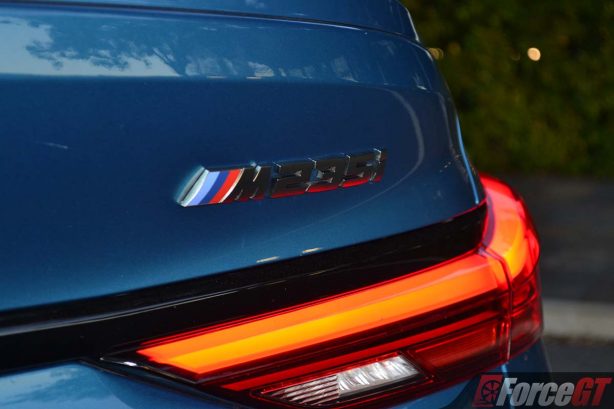 Whichever way you want to look at it, one thing is for sure. It hasn’t lost the dynamism that BMW is renowned for. Yes, it might also have lost two cylinders in the process but that hasn’t diluted its character one bit, either.

In fact, the amazingly timed exhaust farts as you mash the accelerator on take off is hilariously addictive and never fails to garner the attention of impressed passers by.

From the inside, you can almost immediately tell the engine note has been enhanced via the speakers but they are convincing enough and not entirely offensive. Besides, BMW is not the only one resorting to such antics as almost all other manufacturers are forced to artificially enhance their engine noise one way or another due to ever-tightening noise pollution regulations that require them to be quieter.

The orchestral histrionics are matched by a meaty 225kW/450Nm output from the B48 turbocharged 2.0-litre four-cylinder petrol engine that is almost identical to the CLA35 four-pot’s 225kW/400Nm. 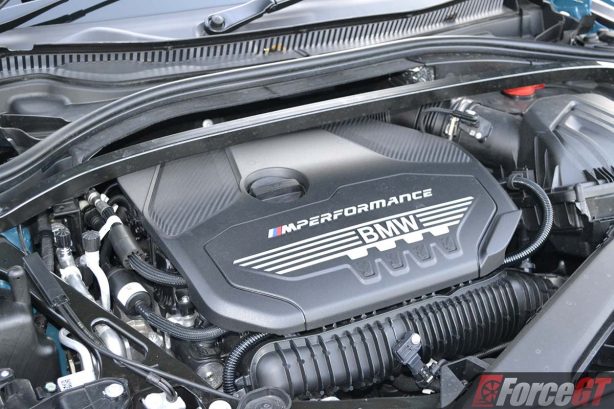 Power delivery is relatively linear throughout the rev range with only mild turbo lag low down but the rush of muscular torque continues unabated from around 1,800rpm until 4,500rpm, right where you need it most.

Unlike the AMG which is married to a 7-speed twin-clutch, the M235i channels its power to the road via an 8-speed torque converter automatic transmission that shifts just as quick. As you’d expect from an M Performance model, its calibration is spot on and always drops to the right gear when cornering to ensure a speedy exit.

Grip from the 235/35 R19 tyres is excellent and when combined with the mechanical Torsen limited-slip differential equipped xDrive all-wheel drive system, delivers confidence inducing clawing power that eggs you on to hit the throttle earlier on every corner.

In typical front-wheel driven fashion, the front end will start to push wide for a split second before the slip-diff and all-wheel drive system quickly shuffles power to the rear wheels, as well as to the inside front wheel, to get the car back into its intended line of travel in a flash 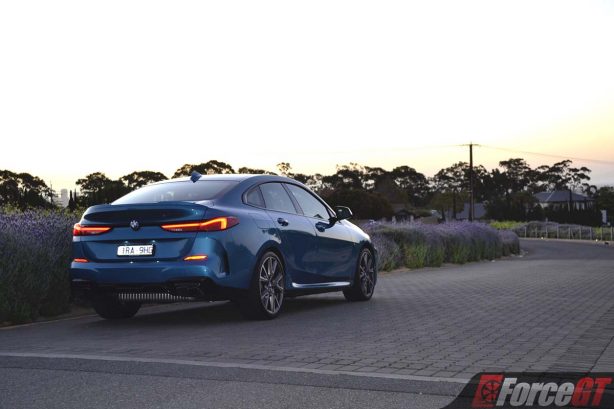 Interestingly, the M235i can only be had with adaptive suspension if you ditch the standard issue 19’s for 18’s for $400. However, I found the passively damped suspension to be judiciously tuned with the sleek four-door staying relatively flat through most corners without being overly firm. While the specially tuned M Sport steering is well weighted, responsive and quick, it isn’t the last word in terms of steering feel, which is a let down from a brand that prides itself on driving enjoyment.

Nevertheless, the all-wheel drive M235i is without a doubt swift and agile. It’s also easier to manage compared to the previous rear-driven M140i which can be a little leery at times, especially in the wet or if you get overly enthusiastic although some might refer to that as ‘driver engagement’.

Being a four-door ‘sedan’, buyers tend to expect a certain level of ride comfort around town and the M235i doesn’t disappoint, especially for a sports model rolling on stylish low-profile 19-inch wheels. It won’t glide over potholes and magically makes them disappear like a Lexus LS would, but it isn’t bone shatteringly harsh, either. The sleek sports sedan is entirely easy to live with day-to-day. 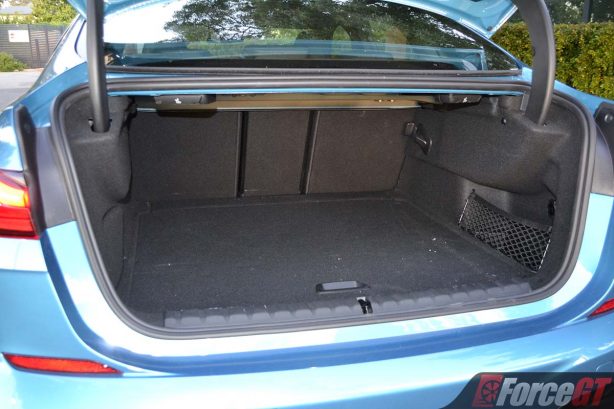 Practicality also gets a tick with a useable 430-litre boot that is expandable by tumbling down the 40:20:40 rear backrests. Like most BMWs, the M235i uses run-flat tyres, as such, there is more storage space underneath the boot floor where a spare wheel would normally reside.

While the 2 Series Gran Coupe isn’t as snazzy inside compared to the glitzy CLA-Class with its giant infotainment screen, it’s by no means inferior. There’s still a sense of occasion stepping into the M235i.

The driver oriented dash design is typically BMW, functional without being over the top, while the novel textured ambient lighting is rather special. All switchgear is where you’d expect them to be with the 10.25-inch centre touchscreen within easy reach of your left hand.

Speaking of which, the latest iDrive 7 operating system is fabulous, with logically laid out menus, fresh and up-to-date graphics and support for subscription free wireless Apple CarPlay and Android Auto, meaning no messy cable within the cabin (there’s a wireless smartphone charger) and instant connection once the phone is pair via Bluetooth. 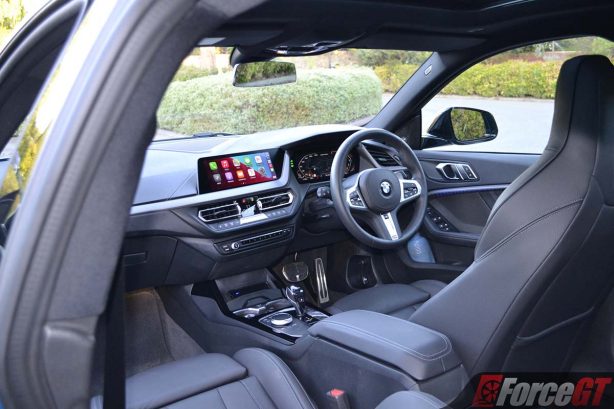 iDrive 7 also means you get the pleasure of interacting with the BMW Intelligent Personal Assistance simply by saying “Hey BMW”. You could ask ‘her’ to change the temperature on your aircon, turn on the built-in Zen music to help you relax, navigate to an address or bring up the latest headlines via the built-in news app.

An identically sized fully digital instruments cluster sits in front of the driver and this is where BMW needs to work on, as the odd C-shaped dials aren’t the best in terms of visual presentation or user-friendliness. Unlike class-best Audi, they aren’t fully configurable, either.

You sit low in the tombstone style sports seats that are electrically multi-adjustable, including extendable thigh support. They not only look great but also embrace you tightly in corners.

Rear seat passengers will however feel a little short changed due to the tight headroom caused by the sloping roofline. Anyone over 5’10″ will have their heads brushing against the headlining. The middle seat passenger also has the central transmission hump to deal with.

But this is the style first, practically second Gran Coupe after all and compromises like these are to be expected. Those intending to share their pride and joy with friends and families may wish to consider the M135i hatch instead. 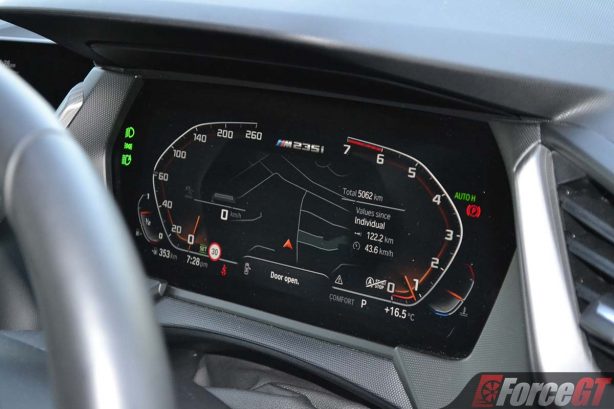 In terms of running costs, the M235i returned 8.1L/100km over our weeklong test which included 85 per cent city commute and enthusiastic blasts around the back roads of the Adelaide Hills. This compares well with BMW’s claim of 7.6L/100km.

The 2 Series is also eligible for BMW’s Service Inclusive Package, which starts from $1,250 covering the first 3 years or 40,000km. It includes oil changes, all filters, spark plugs and brake fluid.

The BMW M235i Gran Coupe is a swift and agile piece of performance machine that oozes driver appeal. Some might lament on its lost of two cylinders and rear-drive layout but a well sorted all-wheel drive can be just as much fun in the right settings.