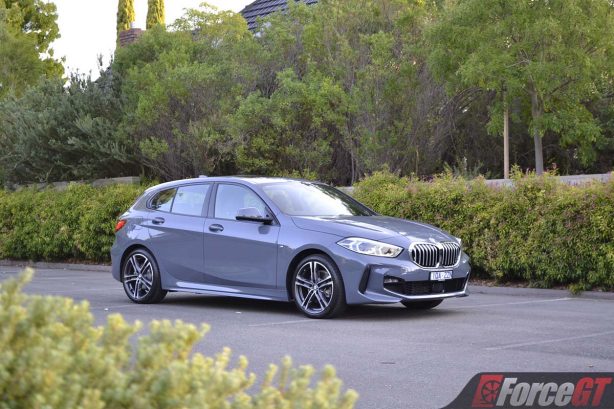 What we have here, the all-new 2020 BMW 118i, is one of the most controversial BMWs to hit the market in a while, not because of its oversized grille or price increase but the 1 Series move from a unique-to-its-class rear-drive layout to the MINI derived front-drive UKL platform.

Purists lament at the switch for good reasons because after all, it was BMW who declared they would never build front drive models not that long ago.

However, to the everyday punter, whether the car is pulling from the front or pushing from the back is, arguably, mostly secondary. Rather, it’s a vehicle’s price, roominess, and packaging that play more important roles.

And there’s where front-wheel drive trumps the traditional rear-drive layout, as they are inherently more roomy thanks to efficient packaging such as a transversely mounted engine.

So let’s find out in more detail if the new front-drive 2020 BMW 118i is a better car compared to its rear-drive predecessor. 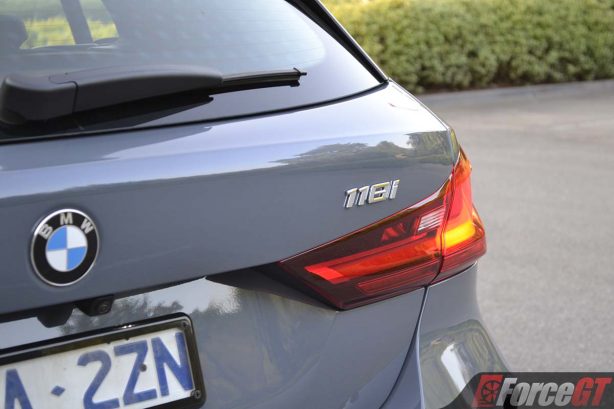 Two BMW 1 Series variants are on offer in Australia – the entry-level 118i tested here, and its all-paw M135i hot hatch sibling.

Prices start from $42,990 for the 118i, and $64,990 for the M135i – both before on-road costs and options. They also represent at least a $4,000 hike in price over the outgoing model although BMW has loaded them with more kit than before. Another variant to fill the middle ground is likely further down the track and the M Sport trim is now standard for the 1 Series.

The front-wheel drive 118i is powered by a familiar 1.5-litre turbocharged three-cylinder petrol engine producing 103kW and 220Nm of torque also used in the 3 Series and MINI. It is connected to the front wheels via a seven-speed twin-clutch transmission.

Meanwhile, the all-wheel drive M135i is motivated by a 2.0-litre turbocharged four-cylinder petrol engine churning out 225kW and 450Nm. It is paired with an eight-speed torque converter automatic sending power to all four wheels. 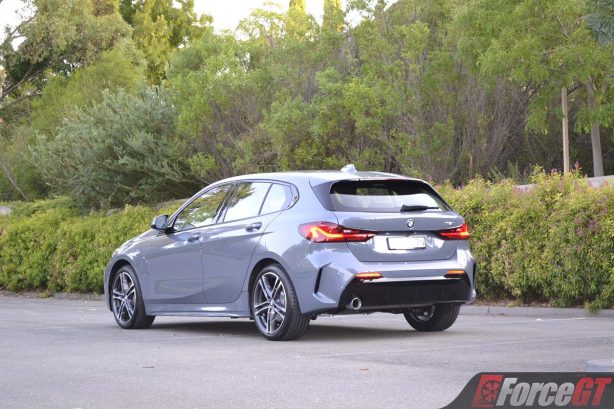 We must admit; the new 2020 BMW 1 Series actually looks much better proportioned compared to the superseded model. While the size of BMW’s kidney grille is getting rather ridiculous with each new model, the grille on the 1 Series is still reasonably appropriate in size.

It’s finished in chrome with vertical slats on the 118i and dark chrome with mesh on the sportier M135i.

Rear-drive cars tend to have very short front overhang and to disguise the fact that it’s front-driven, BMW designers have pulled the tapered LED headlights towards the back of the car to create the same illusion.

Its best angle is arguably from the back, where the new 1er appears low and wide, thanks to its slim LED taillights, plunging roofline and small rear windscreen.

There are six exterior colours to choose from with all but Alphine White (solid paint) a $1,308 cost option. The Storm Bay Metallic paint on our test car is a $1,808 option 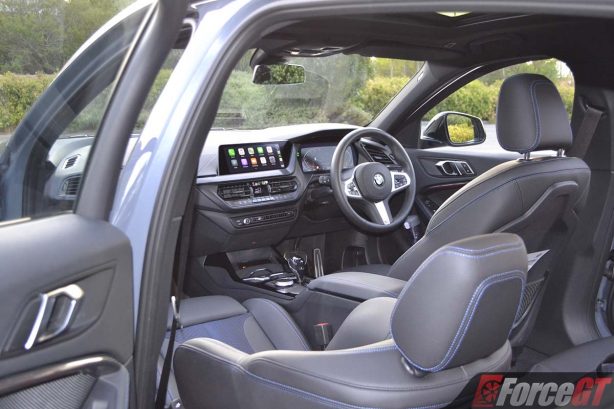 The latest 1 Series is 5mm shorter overall but has a wider footprint compared to its predecessor, resulting in wider cabin space.

And for the first time in a 1 Series, an optional powered tailgate is available for $731 although we’d give it a miss, as the tailgate isn’t very heavy or high.

Despite a 20mm chop in wheelbase to 2,670mm, rear legroom hasn’t been sacrificed as the rear wheels have been pushed back to create more rear seat space. BMW claims there’s an extra 33mm of knee space although there’s still a hump in the middle of the floor to accommodate an all-wheel drive system. 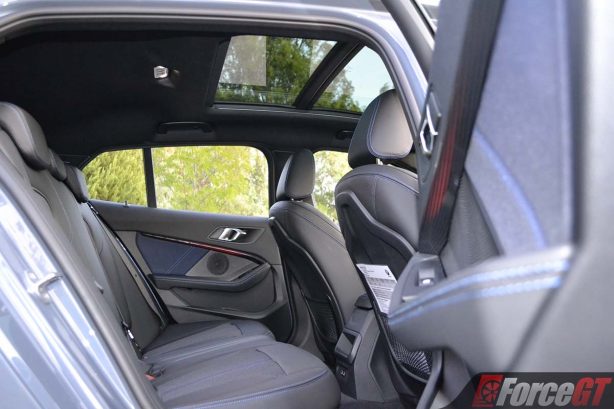 Rear headroom is decent even with the optional panoramic glass sunroof ($2,000) but the rear door opening is a little low with a high chance of knocking your head when getting in and out, and rear seat passengers have to make do without rear air vents.

The driver’s seat has electric side bolsters but lumbar support is sadly AWOL and bundled with a $2,300 option pack that adds seat heating and electric adjustment on the passenger seat. 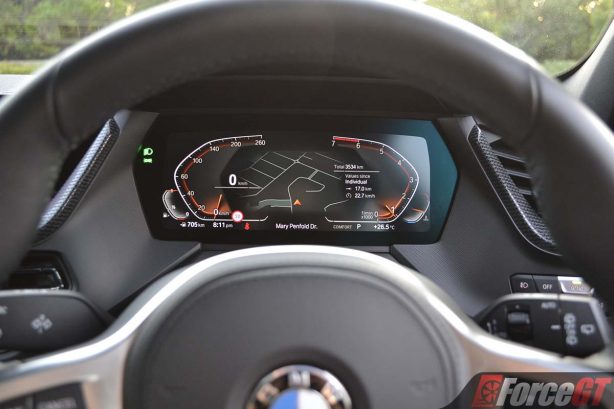 It’s also equipped with a built-in SIM card for Tesla-style over the air software update, as well as serving the news and weather apps on the new 10.25-inch Control Display with BMW Operating System 7.0.

Tech geeks will be pleased to know BMW’s Intelligent Personal Assistant makes it debut on the 1 Series. One can simply say “Hey BMW” to instruct the car to carry out commands such as adjusting the bass on the 6-speaker stereo or calling your Mum.

There’s also Lane Keep Assist with steering assist but we find it’s overzealous in its operation and steering you into traffic instead of away from it.

Another gripe is the lack of keyless entry which is now standard on a $25,000 Suzuki Swift. 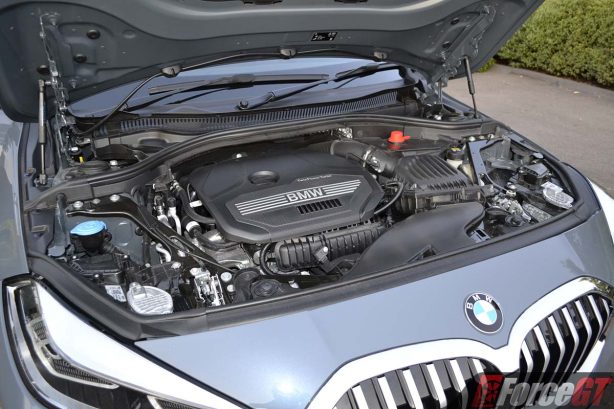 The 1.5-litre three-pot engine shared with the MINI Cooper and BMW 318i produces a modest 103kW of power and 220Nm of torque. It is adequate without being underpowered; so don’t expect to step off the line in a hurry.

BMW claims 0-100km/h takes 8.5 seconds although the seats of pants feel says it’s a second or so more. Fuel economy is rated at a rather optimistic 5.9L/100km, with our tested average sitting at 8.5L/100km. Interestingly, the engine can run on 91RON but BMW recommends 95-octane premium fuel.

The characteristic three-cylinder thrum is still there but you generally don’t hear it and only becomes noticeable higher up in the rev range.

The little engine is a little more responsive in Sport mode and we find it works best in Custom mode, where the engine and transmission is set to Sport, while the steering remains in Comfort.

Like most twin-clutch transmissions, the 118i’s 7-speeder is quick shifting and smooth once moving but can be a bit delayed when taking off from rest and hesitant at low speeds.

The engine start/stop isn’t the quickest, either, taking a split second to fire up once your foot is off the brake pedal and along with the transmission’s delayed take-up, the drive train isn’t what you would call spritely.

Despite a swap to front-drive layout, the 118i’s handling remains tidy and playful. In fact you can get the tail to slide out a little on tight bends to help pivot the car into an apex by applying throttle early. One advantage of the modest power is there’s no understeer to worry about, elevating driver engagement even further.

The fixed rate suspension strikes an ideal balance between handling and comfort, although some might find the M Sport to be on the firm side around town. As keen drivers, we are happy to live with a slightly firmer ride for a better handling.

Its steering is direct and feels good in Comfort mode but is too artificially weighted in Sport.

Around town, the 118i’s general refinement is good with little road or tyre noise intrusion. It’s a similar story out on the freeway, making BMW’s entry-level hatch a fine long distance cruiser.

All new BMWs are covered by a 3 years, unlimited kilometre warranty. While the brand doesn’t offer capped price servicing, buyers could opt for one of the BMW Service Inclusive Packages at the time of vehicle purchase that covers the first five years or 80,000km.

The package can be included in the finance or leasing costs and starts from $1,550 for the BMW Service Inclusive Basic Package for the 1 Series.

It covers annual vehicle checks, oil changes, all filters, spark plugs and labour costs for the duration of the package.

It’s roomier, better looking, more generously equipped and practical than before. The interior also takes a big leap over the superseded model with better materials and a more premium design.

Has it lost its driver engagement. Not really, it’s just a slightly different feel – a front-drive feel.