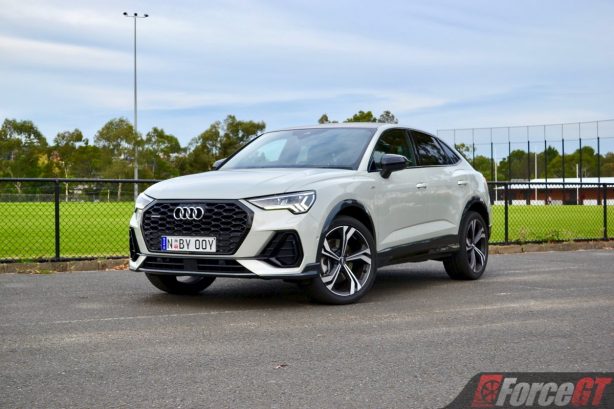 When the humble family SUV looks a bit too domesticated and the sports coupe doesn’t pass the practicality test, there’s only one option left – the so called SUV coupe. Just a few years ago, this category of cars looked like nothing but a confused jacked up hatchback. Things are much better these days, as evident by the latest entry from Audi, the Q3 Sportback. And thankfully, they didn’t call it a coupe.

The shift in buying trends has allowed this once laughable segment to thrive in recent years. People want space, practicality, versatility, sporty looks and sharp handling all in one package, and more and more buyers are starting to understand the idea of the coupe-style SUV. The Audi Q3 Sportback plays in the smaller end of the segment, rivaling the likes of BMW X2, Mercedes-Benz GLA, Range Rover Evoque and Lexus UX. As its name suggests, it’s the sportier derivative of the Audi Q3, with which it shares the same underpinnings. 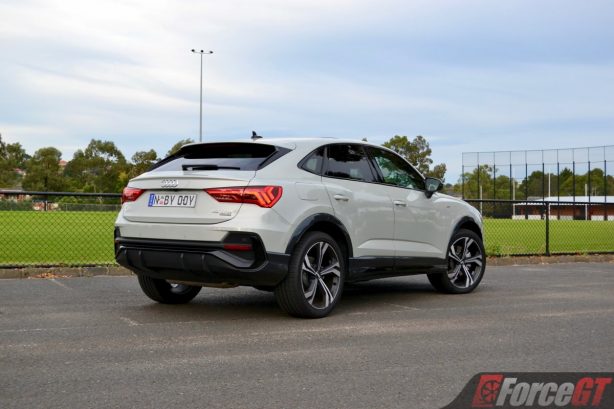 We must admit the Q3 Sportback is quite a design to behold and we are a big fan of it. It has managed to transform the upright, two-box shape of the standard Q3 into something genuinely cool and sporty. Despite sharing the headlights, taillights, front bumper and majority of the lower body with the Q3, the Sportback looks more like a standalone vehicle designed from the ground up to be a coupe-style SUV, than something adapted from the Q3. And the key to this is that low slung roof line which tapers down gently into the raised rear deck, giving the car a whole new attitude.

Bringing everything together are those gloss black painted lower front lip spoiler, wheel arch moldings, side skirts and a sportier rear bumper design which, interestingly, reveals no exhaust tips. Why? Because exhaust no longer can be glamorised in this day and age of green energy and electrification and so it’s hidden out of sight under the car. 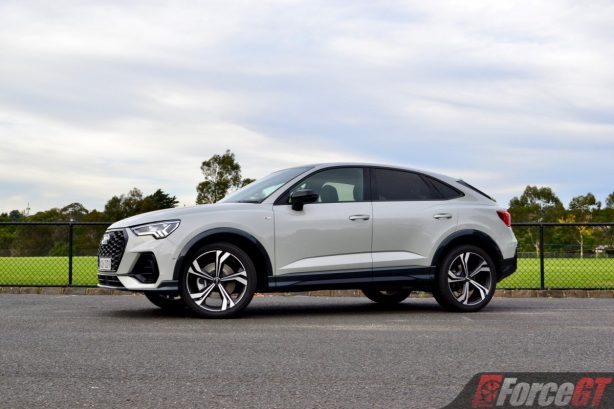 All Australian delivered models come standard with S line exterior styling which, in the case of the 40 TFSI, includes the fitment of two-tone black/polished silver 5-spoke 20-inch alloy wheels. Our test car ups the ante with the optional black exterior design package which sees more gloss black application on the grille, window surrounds and side mirror housings.

The Q3 Sportback is 22mm longer and 60mm lower than the standard Q3. Both cars share the same width and wheelbase of 1856mm and 2677mm respectively. As expected from an SUV more focused on aesthetic, ground clearance is slightly poorer in the Sportback at 183mm, compared to the Q3’s 191mm.

Audi’s new generation of interior has once again reinforced the brand as the front runner in terms of cabin design, and it’s largely evident in the Q3 Sportback. The minimalist yet modern and functional dashboard is no doubt one masterful execution of interior styling. Centre to it all is the driver’s cockpit which features an ultra high clarity 12.3-inch digital instrumentation display Audi calls ‘Virtual Cockpit’. The display is highly customisable – you can even have a full map view – and such amazing are those graphics that you’d never want to look at a conventional instrument cluster again. 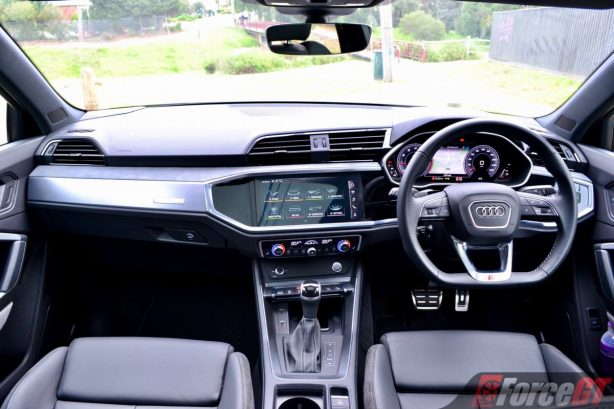 While the Virtual Cockpit has been around Audi models for a while now, the 10.1-inch touch screen MMI infotainment system is new and boy does it look fantastic. It sits flush with the piano black trim on the dashboard and is angled slightly toward the driver for easy reach. Like the digital instrumentation, the clarity and richness in graphics are just next level. It’s so beautifully responsive to the touch, too, making it an absolute joy to use. Do we miss the old rotary knob MMI interface which is now gone? Not the slightest.

What we miss though, is the previous voice command feature which correctly gets your input almost every time. The new one, strangely, seems to struggle a lot with address entry. 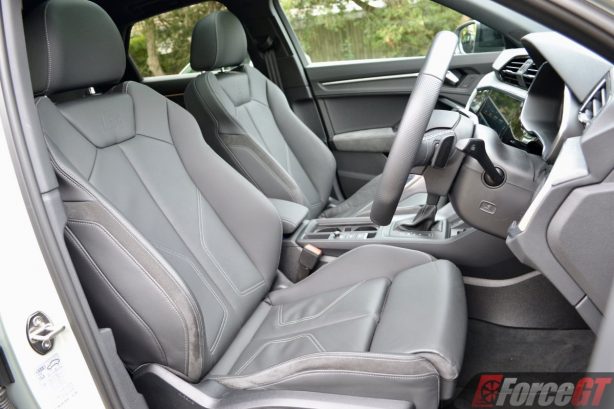 The cabin is impeccably finished with an appealing blend of tasteful materials, including a suede, Alcantara-like stripe that lines the width of the dashboard. Most upper touch points are soft and the mix of deep gloss back trim and polished bright chrome elements give the interior a suitably upmarket ambiance.

That said, there’s still a bit of Volkswagen-ish in the lower centre console where the plastics are hard and dull, and the cup holders lack a sliding cover over them. The dual-zone climate control also lacks a temperature sync button, forcing you to twist the passenger side temperature adjustment knob every time you want to even the temperature out. 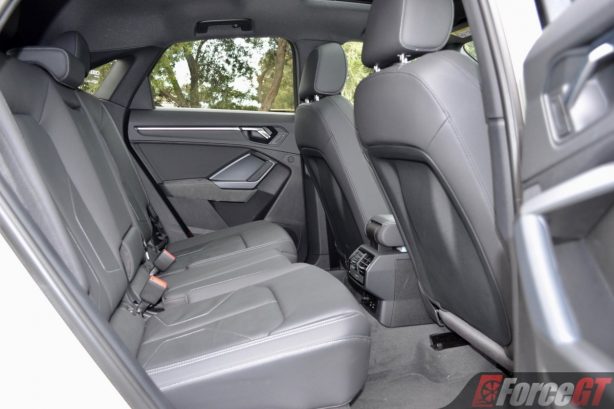 In terms of space, there isn’t much compromise up the front as both driver and front passenger enjoy good leg and headroom. Where things get a bit tight is in the back, and it’s not unexpected from a coupe-style SUV. Rear passengers, especially lofty ones, will find headroom lacking due to the sloping roof, but more than that, the rear seat base doesn’t extend all the way to the door. Instead the small gap is filled with a narrow storage tub. It will be a bit of a squeeze with three adults seated in the back.

Boot space, meanwhile, is listed at 530 litres, which isn’t bad at all for this class. With the 40/20/40 split rear seats folded, the space expands to a voluminous 1400 litres.

The entry level 35 TFSI model is the entry point into the Q3 Sportback range, powered by a 1.4-litre turbocharged petrol engine that produces 110kW and 250Nm. Mated to a six-speed dual-clutch automatic transmission, the Q3 Sportback reaches 100km/h from rest in a claimed 9.3 seconds.

For the best balance of value and performance, you’d want to dig a bit deeper for the 40 TFSI quattro tested here. It’s motivated by a more powerful 132kW/320Nm 2.0-litre turbocharged petrol engine which is paired with a fast-shifting seven-speed dual-clutch automatic gearbox and all-wheel drive.

While the power output may not seem like a lot, its peak torque across a wide rev range of 1400-3900rpm affords the SUV with brisk acceleration both off the line and on the move. It’s capable of a 0-100km/h sprint in 7.8 seconds which isn’t going to set your pulses racing but is all you ever need for a daily driven urban crossover. 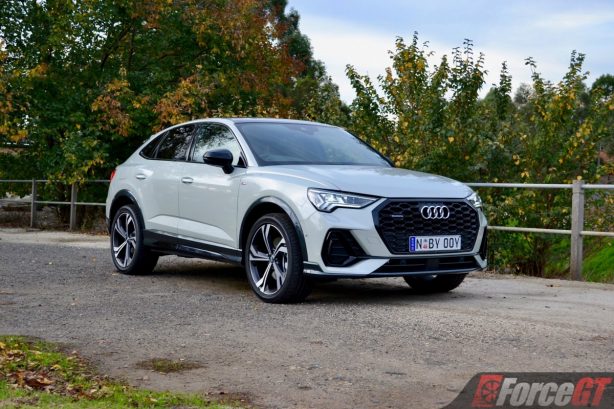 The engine is a refined unit, but more impressive is the seamless idle stop/start system. It’s tuned in such a way that the engine cuts off at precisely the time the wheels come to a halt. Unlike rival systems where you feel a jolt each time the engine cuts or restarts, the Audi system is nearly imperceptible. For once, you don’t have to turn this thing off.

The engine also automatically restarts when the vehicle in front moves forward, ready for you to follow suit, or serving as an alert if you haven’t been paying attention. You can also regulate its activation with the brakes – light brake pressure to keep the engine running, or brake harder to cut off engine. Good stuff, Audi.

Looks apart, a whole point of getting an SUV coupe is for sporty handling. And we are glad to report that the Q3 Sportback doesn’t disappoint. In fact, we’re pretty impressed with how sharp it drives. A lot of that has to do with the quattro torque vectoring all-wheel drive, which serves up phenomenal levels of grip to keep it planted around corners. Despite the elevated ride height and a hefty 1695kg of kerb weight, the dynamics are almost hot hatch like – taut, secured and composed.

It loves to be pushed around the bends and the long suspension travel means mid-corner bumps are never an issue. You do get that typical Audi understeery feel as you near the limit, but overall it feels wonderfully precise in most proceedings.

The steering is sharp if not a little numb on feedback, even in the sharpest Dynamic drive mode. The brakes, meanwhile, are strong and progressive. 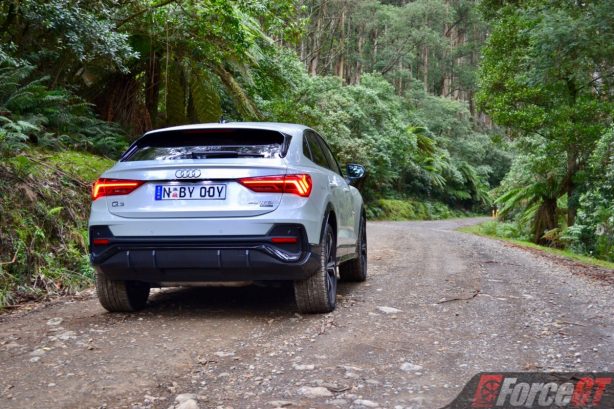 Leaning on the firm side, the Q3 Sportback’s suspension tune lets you feel just enough of the road but nothing too jarring. Despite rolling on 20-inch wheels, the ride is actually still fairly forgiving, with it soaking up bumps and ruts rather well. Our tester isn’t fitted with the optional two-stage adaptive dampers but given how nicely balanced the Q3 Sportback’s ride is we feel it isn’t necessary.

Audi claims the Q3 Sportback consumes 8.3L/100km of premium RON95 unleaded fuel on the combined cycle. At the end of our week long test the trip computer returned a reading of 8.6L/100km, which admittedly involved a few stints of heavy-footed driving. For an SUV with sporty intentions, it’s a commendable figure.

Cruising at legal freeway speeds the Sportback’s fuel use hovered around 4.5L/100km, which almost matches some hybrid SUVs.

Like many premium brands these days, Audi Australia also offers a capped price servicing plan. Called the Audi Genuine Care Service Plan, the plan covers your servicing needs for three years/45,000km for $1,610, or five years/75,000km for $2,630. Servicing interval is set at every 12 months or 15,000km, whichever comes first.

You can tell from the Q3 Sportback that Audi did not engineer this model just for the sake of slotting it into a certain market segment, for there’s real effort and passion put into it to make it one of the best in class. It’s got the right blend of looks, performance and practicality to justify its premium over the regular Q3, if you’re that keen to stand out from the crowd.