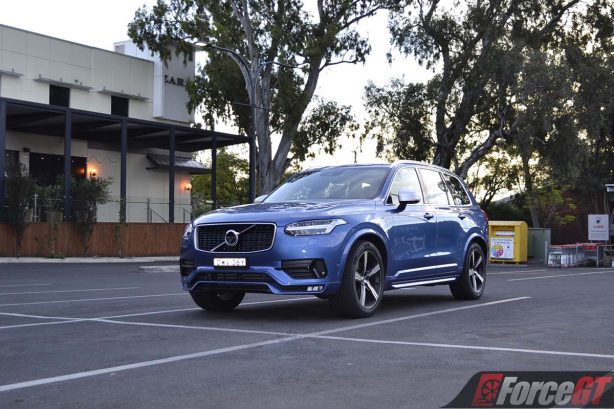 See that little blue square on our 2018-built Volvo XC90 T6 R-Design? It’s the Polestar badge. I first got acquainted with it 3 years ago, also in a XC90. Back then, the Polestar tune was a dealer fitted option that was tagged on to the engine’s ECU.

Now with Polestar set to be unleashed as a standalone brand to take on AMG and M as Volvo’s full-blown performance offering, the engine optimisation is done straight from the factory and is standard on all R-Design XC90s.

As before, the stats have not changed. That means an increase of 11kW and 40Nm to a potent 246kW and 440Nm of torque from the XC90 T6’s 2.0-litre supercharged and turbocharged four-cylinder petrol engine. 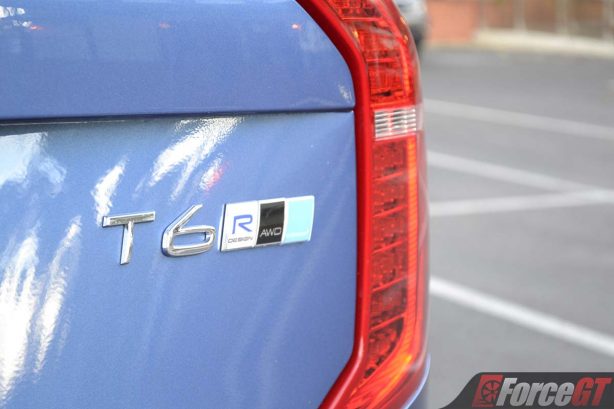 That’s fair, if you asked me, because the slight increase in price not only nets you the extra kilowatts, things like keyless entry, power tailgate and heated front seats – which together used to cost $4,433 – are now standard.

What’s changed since its launch in 2015? 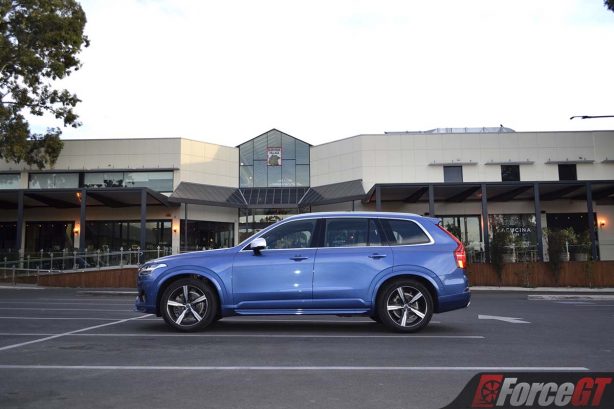 Not much. You still get the same muscular 2.0-litre twin-charge four-cylinder engine cloaked in a handsome sheet metal that has withstood the test of time. Its now familiar corporate face has been adopted by the rest of the Volvo range and is highlighted by their ‘Thor hammer’ daytime running lights and upright Volvo grille. 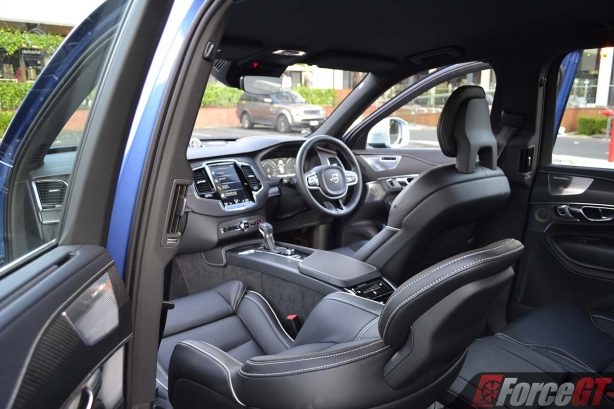 Step inside and the modern, minimalist interior doesn’t feel a day older than when it first debuted. Its portrait style infotainment screen is still one of the most responsive in the business, although the relatively dull graphics aren’t the most exciting. And while it may look massive (at 9.0-inch) 4 years ago, Tesla’s jumbo screen has quickly overshadowed it.

Its semi-autonomous Pilot Assist is still one of the best not just in its class but also in the industry (except – again – for Tesla, of course). Once engaged, it will take over the steering, throttle and brakes while following the vehicle ahead in stop/start traffic or on roads with clearly painted lines.

What else do I get for my money?

Quite a lot actually. 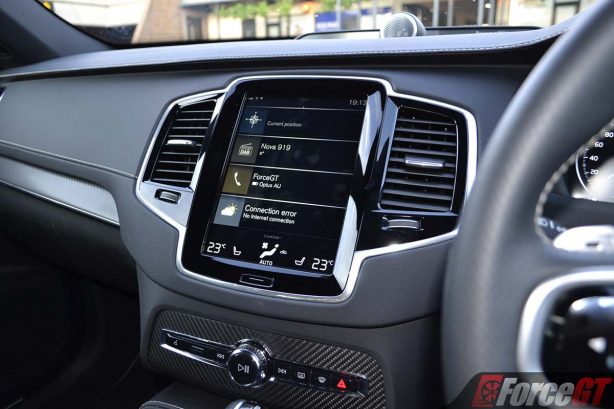 Our tester also comes equipped with another $8,000 worth of options, bringing an even snazzier 19-speakers Bowers & Wilkins premium sound system, heated rear seats (outboards), sunblinds for the rear doors, active chassis with rear air suspension, and dashboard and door tops with colour-coordinated seams.

The striking ‘Bursting Blue’ exterior paint you see here is another $1,900. 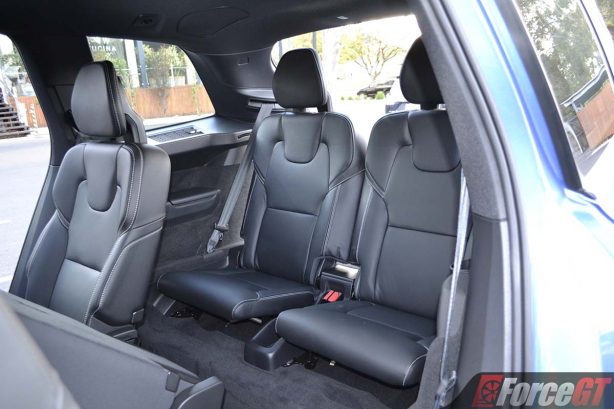 The XC90 is a genuine 7 seater with room for small adults in the 3rd row. Entry and egress to the last row is always going to be rather awkward for a five-door SUV compared to a people mover with practical sliding doors but the large rear doors in conjunction with the slide-able 2nd-row means it’s easier than it looks.

Once inside, the airy cabin ensures all passengers feel comfortable with aircon vents for all three rows powered by a four-zone climate control system. Headroom is excellent in the first two rows, while adequate in the 3rd. It’s the same story for legroom even for taller passengers.

However, for such a vast cabin, storage options could be better. While there are cupholders for all occupants (except for the centre occupant in the middle-row), the door pockets are relatively small especially in the 2nd-row.

Up front, the glove box and centre storage under the armrest are also on the smaller side, but you do get two USB ports within it. There are three 12-volt power outlets throughout the cabin – one in front, which doubles as a cigarette lighter, one in the 2nd-row and another in the boot.

On the subject of the boot, it’s huge. There’s 314-litres with all seats up and 1,019-litres in 5-seats configuration. Dropping the middle-row will yield a whopping 1,868-litres.

On air suspension-equipped models such as ours, the XC90 will lower itself at the touch of a button to make loading easier.

The twin charge means there is hardly any dead spot low down in the rev range. The XC90 is spritely from the get go and continues to muscle through all eight gears smoothly. 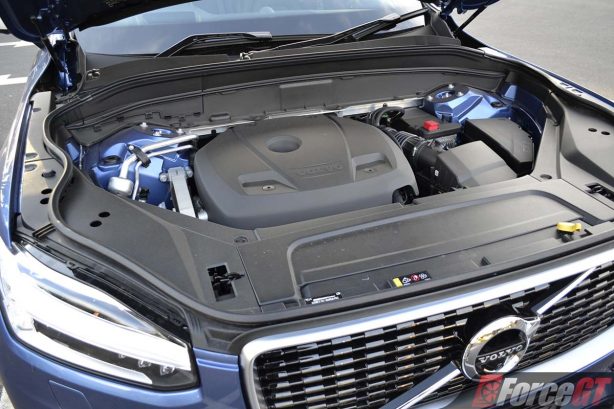 While the R-Design is the sportiest of the range, the XC90 isn’t the most athletic large SUV on the market. For that, you’ll have to look at the Audi Q7 or BMW X5.

However, the optional air suspension does bring a level of agility to the big Volvo compared to the standard Touring suspension that I tested in the 2016 model. It feels more planted and slightly less floaty in Sport mode, yet looses none of its pothole ironing ability and ride comfort.

As before, its steering is still remote, especially on-centre but is relatively quick and direct for a large behemoth.

The cabin is well insulated from most of the outside world, making the XC90 Polestar a great long distance cruiser.

The XC90 is covered by a 3-year/unlimited kilometre warranty, which is comparable to other premium marques except for Lexus with its 4-year/100,000 warranty.

It needs a visit to the dealer every 12 months or 15,000km, whichever comes first.

Volvo offers two services programmes for the XC90, which has to be purchased prior to the first scheduled service:

Volvo says the T6 Polestar should use just 8.5L/100km of fuel in a mix of urban and open roads but my average after around 400km of mainly city and suburban runs saw the trip computer reporting 14.0L/100km.

The Volvo XC90 T6 R-Design Polestar remains an excellent choice even after all these years. Its combination of styling, performance, comfort and safety is still as relevant today as it was when it first debuted.

With an even stronger value proposition now than before, the XC90 should be on the shopping list of those looking for a full-sized premium SUV.

Previous Is this the 2020 Porsche 911 Turbo? Instagram leak claims so
Next Stylishly unconventional new 2019 Peugeot 208 revealed