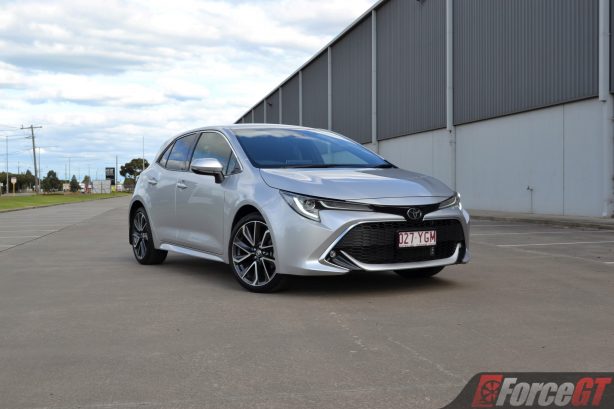 It feels like the Toyota Corolla has been around forever. It must feel that way because it’s now in its 12th-generation and it’s still immensely popular. Not because it’s anything special but because it’s a name synonymous with words like sensible, reliable and dependable. In other words – it’s just bland. Well, not anymore. We mean, just look at it. The new Corolla actually boasts some visual appeal!

Available in conventional petrol-powered or petrol-electric hybrid form, the 2019 Corolla line-up kicks off with the Ascent Sport petrol manual at $22,870 and stretches 7 variants to the range-topping ZR hybrid automatic at $31,870. All prices exclude on-road costs. We have previously tested the hybrid so this time around we’re sampling the petrol ZR model.

Priced at $30,370 plus ORCs the ZR Petrol is the second most expensive model in the Corolla range. The top-spec ZR badge means the Corolla is shod with eye-catching 18-inch alloy wheels and a snazzier rear bumper treatment. It’s the sportiest looking variant in the sportiest Corolla ever. 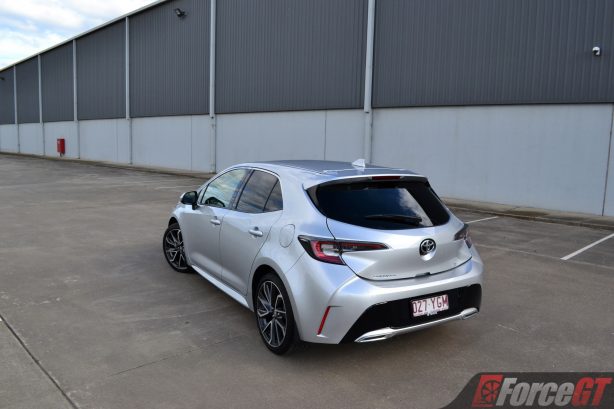 Like the one-grade down SX, the ZR also comes with a wireless phone charger, DAB+ digital radio and an 8-inch colour touchscreen with satellite navigation and SUNA live traffic.

Sadly, the latest generation of the Toyota infotainment system is still lacking Apple CarPlay and Android Auto smartphone integration, a feature that is now available on almost all competitors.

Like the new Camry, the latest Corolla looks a whole lot cooler than any generations before it. It’s still unmistakably a Corolla thanks to the familiar silhouette that has shaped all Corollas of the last two decades, but the new car is longer, lower and wider than its predecessor. The new design is bold and sophisticated, and at certain angles, upmarket even. Where Corollas in the past would blend in anonymously in traffic, this new one confidently stands out. With that in-your-face front fascia, it’s just impossible to mistaken it for something else.

It’s the same story on the inside, with the entire cabin completely redesigned with the same bold and modern approach used on the exterior. The chunky old dashboard is gone and in its place is a much more stylish and contemporary replacement that is much easier on the eyes. 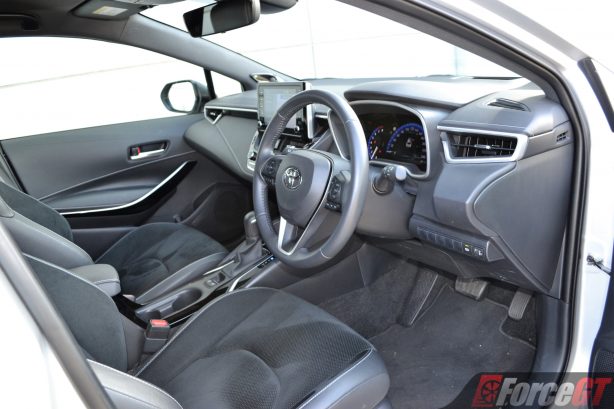 While there’s still some use of scratchy hard plastics in less apparent areas of the cabin, there’s a general lift in material quality compared to before. The gloss black trims look deep and rich, the contrast stitching is delicate and the sport seats, with their metallic inserts and leather-suede trim, not only look great but are also superbly snug and comfortable.

And on the topic of comfort, those seated in the rear will have to live with below average legroom. They do, however, get treated to rear air con vents that are available for the first time in a Corolla.

Elsewhere, there are decent sized cup holders front and back, along with door pockets and a usefully sized bin under the front centre armrest. 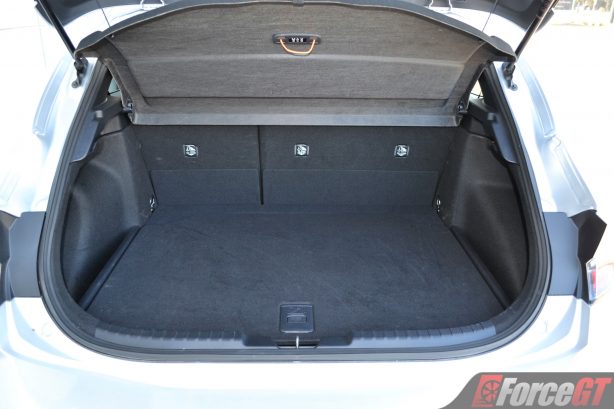 As you might have read in other reviews, the biggest gripe for the new Corolla is its tiny boot space, which trails not only rivals but is also smaller than the outgoing model (360 litres). However, the good news is if you’re looking at the ZR, it comes with the biggest boot of the range.

At 333 litres, it’s 116 litres more sizeable than its lesser siblings, thanks to the absence of a spare tyre (a tyre repair kit is provided). Folding the 60/40 back seats will liberate more space to carry longer items.

Toyota calls its new 2.0-litre petrol mill ‘Dynamic Force’ engine. We don’t blame you if you think it means turbocharging, but the 2.0-litre direct-injected, four-cylinder petrol engine is actually a naturally aspirated unit. It generates 125kW at 6,000rpm and 200Nm of torque from 4,400-4,800rpm.

It’s paired with a CVT automatic equipped with a conventional mechanical take-off gear designed to eliminate that elastic band feel that is a common bugbear of CVTs. Drive is channeled exclusively to the front wheels.

Without coming as a surprise, the atmospheric four-pot isn’t as punchy as turbocharged alternatives, especially when getting off the line as peak torque doesn’t arrive until half way in the rev range. That said, it’s adequate for the daily grind, just be prepared to pile on the revs when there’s a full load on board. 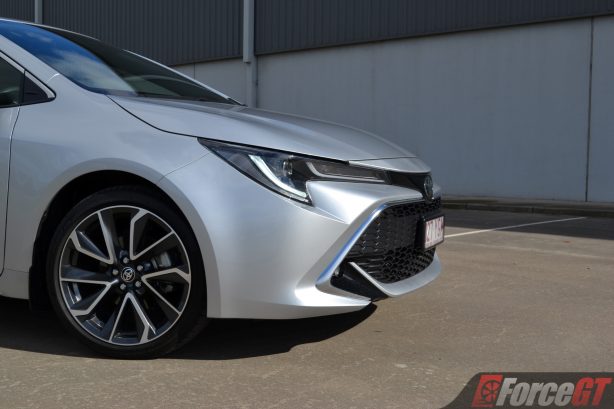 What’s impressive – and clever – is the one-of-a-kind launch gear embedded in the CVT. Accelerating away from stand still, the launch gear does give the feeling of driving a regular torque-converter auto, delivering a linear build up of power and speed. On throttle lift off the CVT’s belts and pulleys take over to give a smooth and jerk-free drive, as well as to optimise the drivetrain for fuel efficiency.

Based on the Toyota New Global Architecture (TNGA) platform, the new Corolla has a lower centre of gravity, new multi-link rear suspension, 60 per cent more rigid body and improved weight balance. The result is a hatch that rides well yet capable of delivering warm hatch-like handling that is unlike any Corolla we have driven in the past.

The chassis is noticeably tauter than before, which when combined with the beautifully tuned Macpherson strut front and multi-link rear suspension offers sharp turn-in, incredible composure and near flat cornering stance. 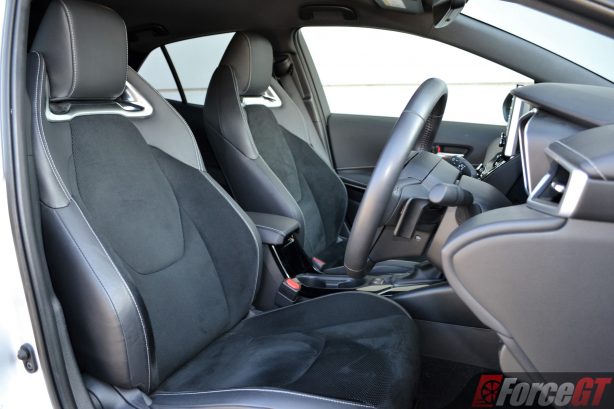 The steering in the ZR has a slightly different steering ratio (13.6 vs 13.5) compare to the rest of the range, bringing a marginally more direct rack and quicker steering (2.65 lock-to-lock vs 2.76). It’s also shod with wider Dunlop tyres (225/40 R18) which offer more grip.

We can’t believe it when we say this. The new Corolla is actually amazingly fun to push around corners and no doubt one of the best handling cars in its class. Given how good this new chassis is, it’d be a waste if some sort of a hot variant that rivals the Golf GTI or Focus ST doesn’t come out of this but rumour has it that it’s in the cards. And we can’t wait.

In terms of servicing the Corolla requires a visit to the dealer every 15,000km or no longer than 12 months, which ever comes first. Every new Corolla is now covered by Toyota Service Advantage capped price servicing at $175 per service for the first 5 years. Bargain.

Fuel consumption is rated at 6.0L/100km on the combined cycle for petrol-powered ZR. On test with over 500km of mixed roads traveled it managed to return 7.2L/100km which isn’t too far off the official figure.

Safe and sensible aren’t just what the new Toyota Corolla is all about. It’s now packed with style and welcomingly, driving dynamics that will give cars like the Mazda3 and Volkswagen Golf a run for their money.

It’s also immaculately presented both inside and out and comes with class-leading safety technologies. Backed by a 5-year warranty and an equally long capped price service scheme, the new Corolla makes a strong case for itself in a tight market segment.