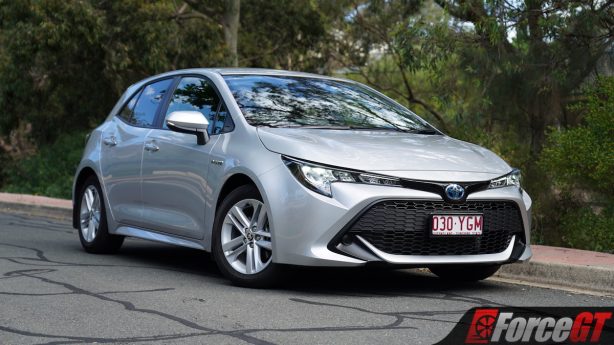 The Toyota Corolla is a bit like a set of jump leads – almost everyone has one in the garage, and if they don’t, they’ll know someone who does. I myself might not have ever owned a Corolla, but both my parents owned Corollas from the days of them being rear-wheel drive – my father still had his when I came along – and I can think of plenty of my friends who own or have owned Corollas too.

It’s almost hard to imagine just how impactful the Corolla has been since the nameplate’s first introduction on the back of a little sedan in Japan in November 1966. Over 40 million have been sold since then, easily cementing it as the world’s best-selling car, with it taking various shapes and sizes throughout the years.

But while it’s always been undeniably prolific, it’s also been, well, a little bit boring over the course of the last decade or two since the Corolla’s loss of rear-wheel drive. That’s not to say the Corolla hasn’t been solid and dependable, as it definitely has been. It’s just not been what you’d call exciting or enthralling.

As the Corolla now enters its twelfth generation, however, things are a little bit different. And by a little bit, I mean a lot, because this is the boldest car to bear the Corolla badge that we’ve seen in a very long time. 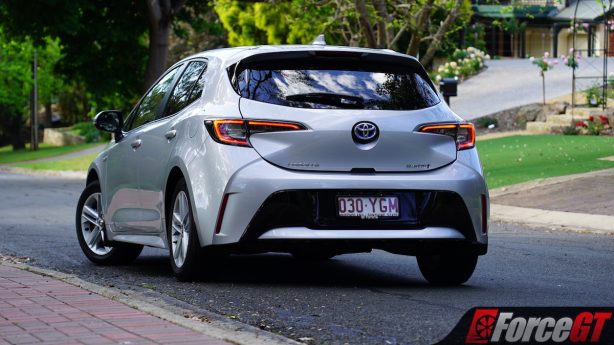 The design is totally wild in the best way possible, with angles and curves and strong lines galore. It looks truly fantastic, and manages to be sporty yet still subtle, particularly in silver of our tester, although it still looks smart even in the wilder colours in the range.

It’s also bold in its methods of propulsion, as it bucks the trend of downsized turbo engines in favour of a focus on hybrid power – something introduced with the outgoing model – and cleverly-engineered naturally aspirated petrol engines.

The latest Corolla range is currently comprised of three trim levels upon launch – Ascent Sport, SX, and ZR. The fleet-focused Ascent is done away with (for now, at least) but all current variants are available with a choice of two powertrains – a 2.0-litre four-cylinder petrol backed by a clever CVT that utilises a torque converter, with the option of a six-speed manual in the Ascent Sport, or a hybrid powertrain that pairs a 1.8-litre petrol engine with two electric motor-generators. 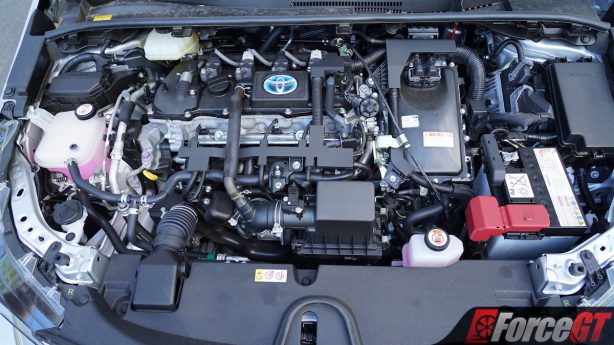 For our first steer in the latest Corolla, we were handed the keys to an entry-level Ascent Sport with the hybrid powertrain, which commands an entirely reasonable $1,500 premium over the pure petrol.

The tip-in point to the Corolla range certainly isn’t as basic as you’d normally expect from an entry-level model, with plenty of kit to whet people’s appetites – auto high beam, radar cruise control, an eight-inch colour touchscreen, and bi-LED headlights come standard on all Ascent Sports, although the hybrid also gains dual-zone climate control, keyless entry, and push-button start as standard too.

However, satellite navigation is an option, and a pricey one at that, listed at $1,000. To sweeten the deal, however, Toyota does throw in DAB+ digital radio connectivity and privacy glass with it. Apple CarPlay and Android Auto isn’t available though, which is a shame as it would negate the need for costly integrated sat nav. 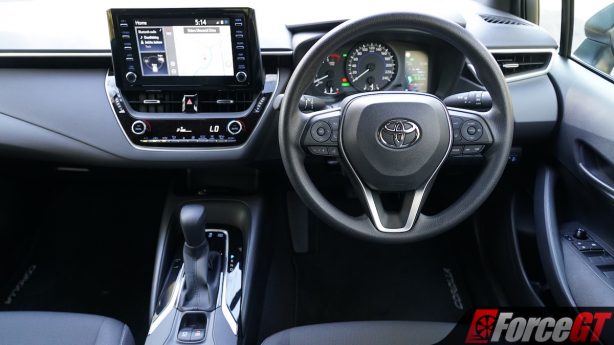 If the outside of the Corolla is cool and funky, it’s very nearly got the interior to match. The design, while simple, looks attractive and interesting enough to hold its own. Unsurprisingly, it’s incredibly well-laid-out and feels remarkably well put together, with some of the highest quality switchgear in the class – especially the volume knob, which has a smooth action to it just like in a Lexus.

The materials are of an acceptable quality, although the more premium finishes are reserved for the ZR model. I do like the use of cloth for the armrests on the centre console and door cards, although the urethane steering wheel does serve as a constant reminder that you’ve cheaped out, and would be enough to make me step up to the mid-grade SX which brings a leather steering wheel and sat nav as standard, serving as far better value for hybrid buyers.

The standard bucket seats are easily the biggest highlight of the interior though, as they are incredibly comfortable and supportive with excellent leg, side, and even shoulder bolstering. Were they to have adjustable lumbar support too, I’d be giving them full marks. 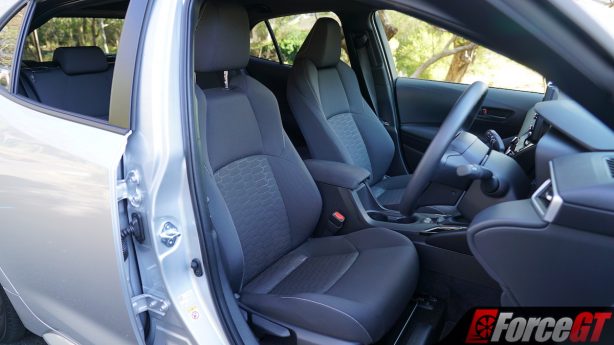 Rear seat passengers aren’t quite so well catered for, however, as there’s very little room in the back for those of us who are long in the leg. It’s not the only compromised space either, as the fabulous exterior styling comes to the detriment of boot space. The boot is laughably small with just 217 litres of space, meaning it is smaller than some cars in the class below it. And even with the rear seats folded flat, fitting in much is a bit of a struggle.

There’s one thing it’s hard to pick any real faults with, however, and that’s the way it drives, because the engineers at Toyota have really done their homework on this one.

While the previous Corolla Hybrid – the only version of the eleventh-gen model to be offered with multi-link rear suspension, something that is now standard on all new Corollas – was a decent drive, this new one is… well, it’s actually quite fun! Who would’ve thought?

The hybrid powertrain has had a big overhaul which, while it has seen peak power drop 10kW down to just 90kW, has made it far more driver-focused. It’s surprisingly engaging, with the CVT remaining well-behaved and the transition from electric to petrol power completely undetectable – other than the sound of the engine firing up at higher speeds, of course. 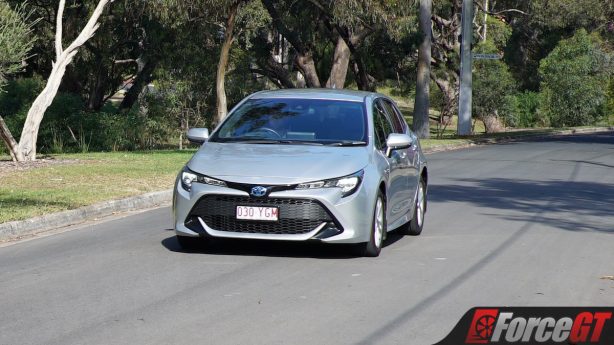 Now granted, there’s not a lot of power to work with, as 90kW is far from what others in this class are offering, but it’s accounted for by the punch of the electric motor’s low-end torque which really rockets you off the line. Combine this punchiness with its small size and nimble handling and it makes for a brilliant city car – you can just dart through traffic with real ease, simply slotting into any gap that appears with no trouble.

Personally, I also found it quite fun trying to see how long I could keep it running on electric power only – the batteries will only get you around for roughly 2km on a full charge, and it will usually switches to petrol power once 40km/h has been reached – which is a challenge, but you can outsmart it if you’re precise with the accelerator pedal.

But while it’s most in its element around town, the new Corolla is great fun on a backroad too. With a wide stance and short wheelbase, it feels nicely planted on the road and handles with real confidence. It turns in nicely and feels composed through the bends, with the weakest link being the low rolling resistance tyres which, while good for fuel economy, aren’t exactly designed with spirited driving in mind as you can really feel the sidewalls deforming mid-corner, although you really have to be overstepping the mark to provoke any serious understeer. 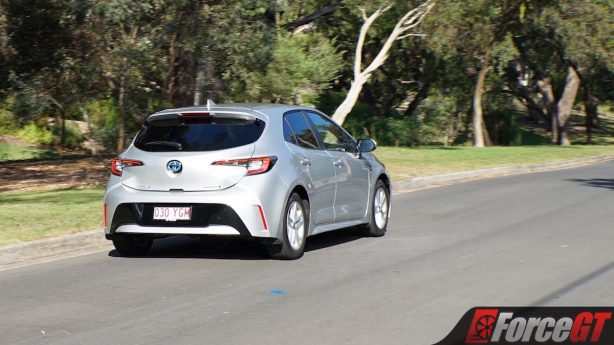 That’s where the low-profile tyres on the ZR’s 18-inch wheels would make a world of difference, especially as there’s little else I’d want to change. It’s a really great chassis, and while the hybrid drivetrain has enough go for it not to feel too slow, it would be nice to have a bit more power on tap to really make the most of what is a very sorted little car.

Putting it into perspective, however, the hybrid isn’t exactly aimed at those wanting to drive hard – its focus is on relaxed and economical driving, which it’s right on the money for. Plus, rumour has it that a properly hot Corolla may come to fruition, so we’ll save the thrashing for that.

And, speaking of the hybrid’s fuel economy, it’s mighty impressive. While claimed fuel use is up one tenth over the outgoing model, taking it to 4.2L/1o0km, it’s a lot easier to match that figure in real-world driving. Brimming the tank after 650km of varied driving without any particular attention being payed to driving economically, we crunched the numbers and saw a return of a little under 4.7L/100km – around a litre less than we used in the old one. 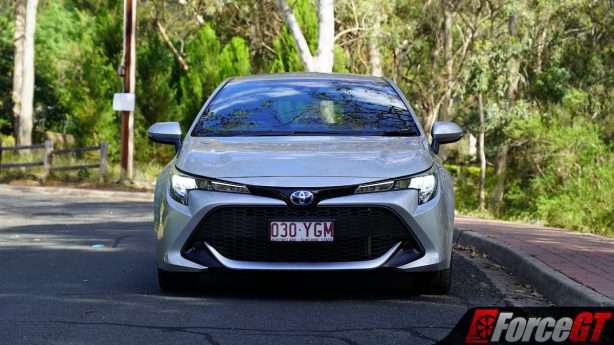 Making a good first impression is always important, and the new Corolla has left us very impressed after our first encounter. It looks fantastic, it handles confidently, and the hybrid drivetrain is better to drive and more economical in the real world than before.

The mid-grade SX does look to be better value considering the cost of adding sat nav to the base Ascent Sport and the extra niceties you receive with the step up. Keener drivers may want to go for the sportier ZR or wait until a hot one comes along, and the tiny boot won’t win around those who are constantly lugging things around, but even as this one sits, it’s still a great little thing with plenty to like about it.

But most importantly, the Corolla is finally fun again. And that’s something definitely worth celebrating.