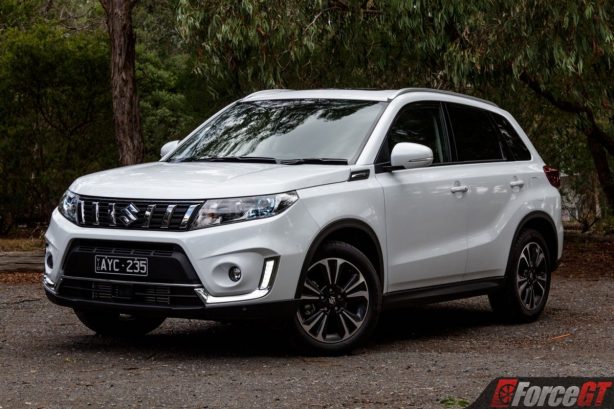 When it comes to picking a decent name for their models Suzuki have come through with the goods for the Vitara Turbo AllGrip, with a name like that you’d expect it to be some sort of Group B rally monster rather than a civilized urban SUV.

The Vitara is a familiar site on the roads with the previous model getting a good four year stretch before this 2019 refresh came along and delivered a host of improvements to the popular package. 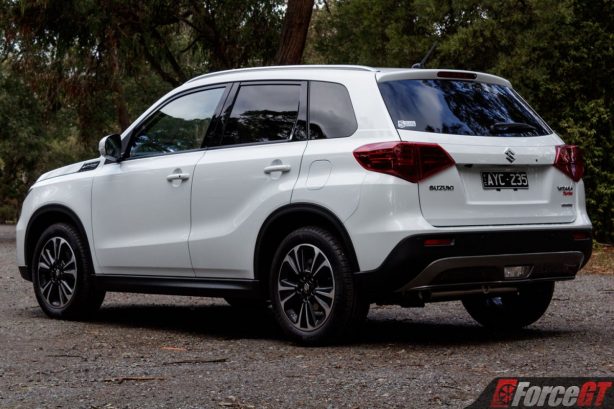 In the visual department the updated Vitara gains the expected front bumper restyle which has been warmly worked over to update the grill and lower radiator openings along with a few more splashes of chrome applied here and there. Gone are the chrome door trimmings and the rear brake lights have been updated to a more modern dark red finish.

Overall the Vitara still holds its own with modern looks and when given the optional two tone treatment will even turn a head or two. 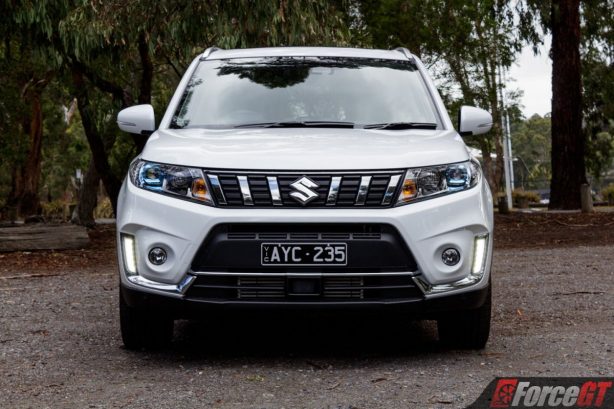 It’s on the inside that Suzuki has focused their attention with the most obvious change being the seats losing the all leather finish and now coming with geometric alcantara centre linings setting it apart from other SUV’s.

Given the approachable $33,990 plus on-road costs of the Vitara Turbo AllGrip, you’re bound to find a few budget materials located around the cabin space such as the plastic door trim and lower dashboard panels. Suzuki did go to the effort of dressing them up with the dashboard plastic trim sporting a paint job reminiscent of some sort of tropical fish and proudly wearing the AllGrip badging.

There are a few odd ergonomic quirks to be noticed in the Vitara, first up being the instrument cluster. It’s the usual combination of RPM and speed gauges which flank a central digital display used for showing your economy figures and various settings, nothing new here. What’s annoying is how you have to use the instrument cluster stalks to adjust it rather than steering wheel mounted controls. So all of a sudden jumping through the various screens becomes a real chore instead of a simple button push. And even after you’ve jumped through all the screens you won’t find a digital speed read out leaving you to rely on the speedometer instead for a less accurate reading. 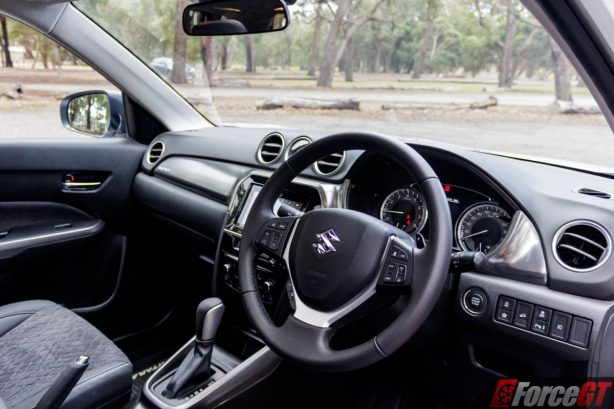 Storage as in the old model continues to be decent with a nice deep center console bin, dual cup holders, deep door pockets and a small pocket just under the centre console for your phone and coins. The sliding armrest helps keep things comfortable but I have to note that the seats up front both had extra springy upper back cushioning, not uncomfortable in feel, just odd.

The high seating position helps with visibility all round and thanks to the flat window line side and rear visibility was never an issue.

Compared to others in its class, the rear seats offer excellent room particularly in the leg department.

The panoramic sunroof, as lovely as it is, does rob head space but not to the extent that you’ll be bumping into over bumps.

Where the Vitara excels in interior space it falls short in other areas. You get no arm rest from the 60/40 split rear seats so that also means no drink holders and there’s also no USB or even 12v charging ports available from the rear seats so those with kids glued to their tablets will have to ration battery life for longer trips. 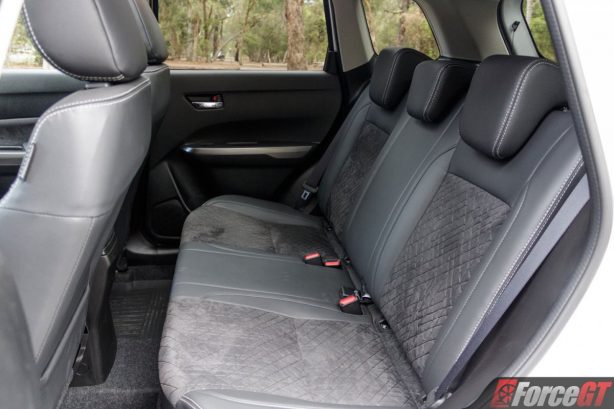 Heading over to the boot reveals a decent void of space that measures in at 375 litres with the seats up and 1,120 litres once they’re dropped. In their down position the rear seats can’t go completely flat which does limit overall cargo carrying capacity. To make up for that you do get dual storage pockets to the sides and the flat boot floor makes loading and unloading a back friendly process. For extra space the boot floor can be removed to reveal further storage below. 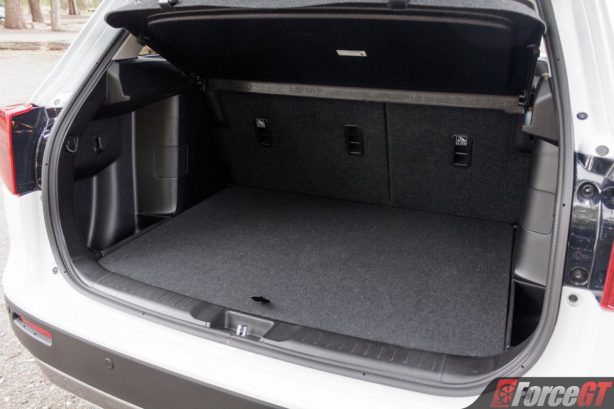 Tucked away in the engine bay is Suzuki’s 1.4-litre turbo four cylinder petrol engine as found in the Swift Sport and what a cracking little engine it is. The power figure won’t tell the full story, 103kW @ 5,500 rpm, it’s the torque that impresses with 220Nm from as low as 1,500 rpm through to 4,000rpm. This makes for a very drivable engine that always has the grunt to get up and moving leaving the Vitara Turbo AllGrip with brisk acceleration when you need it.

And all this is done without breaking the fuel budget. We managed to eke out a respectable 7.7L/100km compared to the official rating of 6.2L/100km, less aggressive driving than ours will see improved figures for sure. 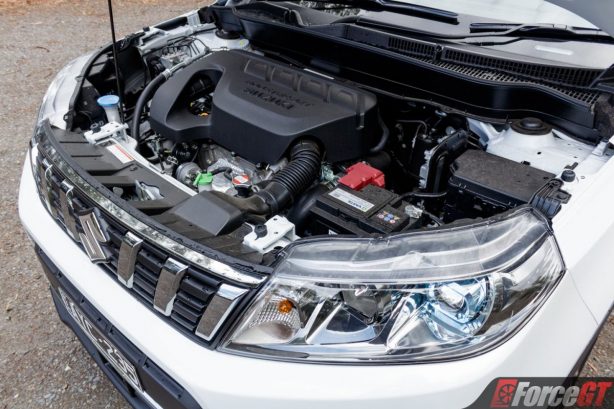 Suzuki knows that the Vitara will be hitting the school run far more than the more demanding off-road environments of Australia and the suspension has been tuned to accommodate this. It’s firm enough that you have a good sense of control at all times without becoming uncomfortably bumpy over poor roads.

On the right road some might even say that the Vitara can deliver a mildly fun driving experience which is impressive for any SUV. This is mostly due to the kerb weight being kept at a low 1,235kg which helps to explain the fuel economy figures too. The downside being that the little Vitara will get blown about on gusty days.

Three various driving modes are available from the rotary control dial that adjust how the 4WD system works with Snow mode being the most capable off-road and sport able to bring extra traction in low grip road environments. 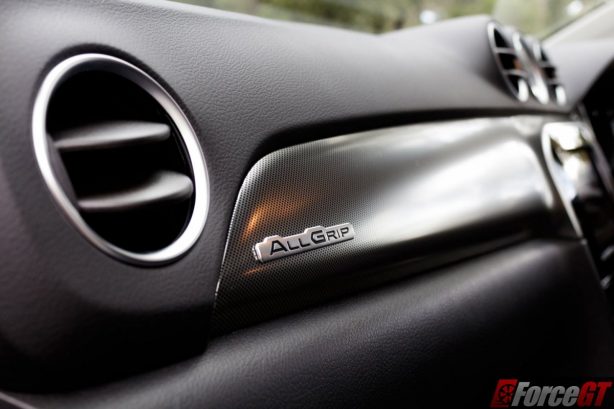 In top spec trim the Vitara Turbo AllGrip comes equipped with an expansive list of features that has both comfort and safety covered to good effect.

When it comes to convenience and comfort you have access to:

Safety falls to the following features to ensure that the 5-star ANCAP safety rating is kept for the new model.

Of all the features the only disappointment fell to the infotainment system, it’s the same unit found in the lower spec Ignis and Swift which has a very basic interface that is a chore to input addresses into as it’s slow to respond. The on screen controls could be better laid out as a few are tricky to use when on the move due to their small size.

This minor gripe is more than made up for by the inclusion of many active safety features leaving the Vitara with a feature list that’s impressive for the price. 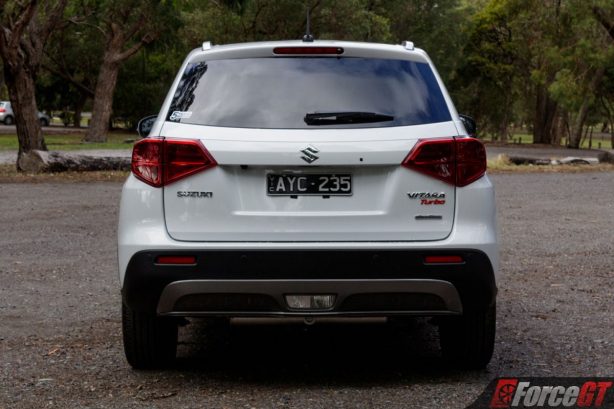 The Vitara Turbo AllGrip makes a strong case for itself in all categories as an excellent all rounder that manages to maintain an affordable price.

The punchy engine and low weight make it both economical and fun to drive while the strong feature list can hold its own against rivals.