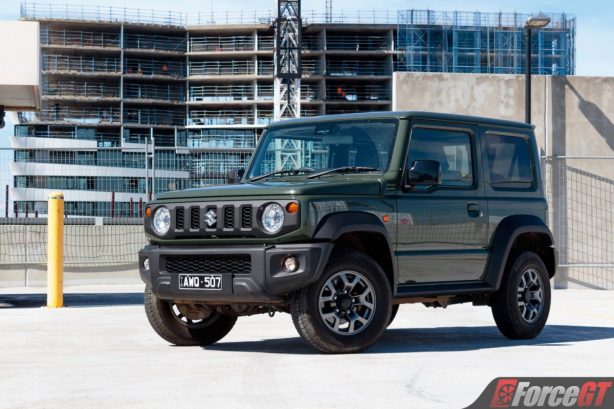 It’s refreshing to come across a car that’s focused and knows exactly what it was built to do rather than a jack of all trades that lacks identity. The 2019 Suzuki Jimny, like all of its predecessors, is built to get down and dirty off-road where it can take advantage of its smaller size to reach places the bigger competition simply can’t. The big question is with such an emphasis on all things mud and dusty, how does it handle the more civilised world of the urban jungle? 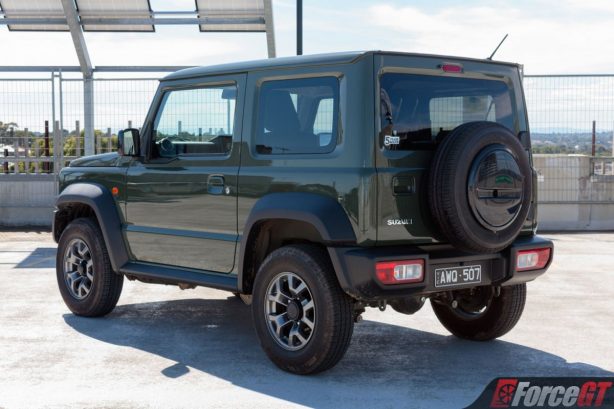 In the looks department the Jimny is brimming with character derived from its function over form styling. The short overhangs lead into giant wheel arches that house the 15-inch alloy wheels clad in chunky 195/80 profile rubber all round. There’s something very appealing about the utilitarian retro looks that makes up the Jimny’s style, a design which borrows elements from previous generations such as the grille and headlights among others. The Jungle Green paint that our Jimny came with doesn’t do it justice as the Kinetic Yellow in two tone looks so much better and highlights the design elements further. 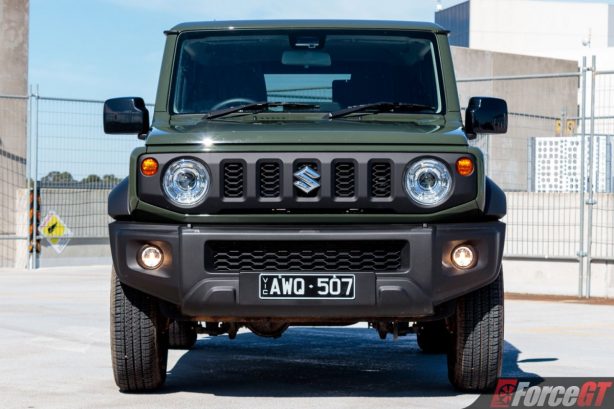 Suzuki aren’t known for the most amazing of interiors as they’re usually packed with plastic and the Jimny is no exception. To hit the affordable $23,990 plus on-road cost sticker price some parts of the Jimny had to be compromised and it’s in the interior that the Suzuki accountant’s input becomes obvious.

Starting with the good parts, visually everything looks decent with the faux industrial look of exposed mounting screws and chunky controls dotted around the place. The infotainment unit is well integrated into the dashboard and the controls are intuitive and simple to use.

When it comes to storage your options are very limited as the center console is cut short to accommodate the low range gear stick leaving just two small drink holders and a tiny pocket for all your bits and bobs. The entirely plastic door trims provide a thin pocket for storage and the glovebox is just as small as you’d expect it to be.

There’s a small section under the center console controls which should be ideal for phones however it’s just too small to fit the average smartphone in there and the mounting isn’t that solid either as the unit moves around a bit, too. 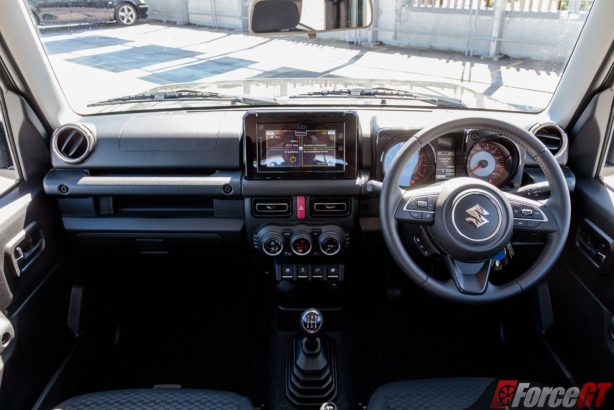 In terms of comfort it’s a mixed bag, the cloth seats are fine for short and long trips however the lack of a telescopic steering column makes finding an ideal seating position a challenge. Once that’s sorted and you’re on the way the next comfort hurdle rears its head with the lack of a footrest for your clutch foot.

Both engine and exterior noises work their way into the cabin which is most notable on freeways where the engine hums along high in the rev range due to the lack of a 6th gear. Also due to the boxy body design the Jimny is quite subject to being blown about on gusty days which is amplified by the softer offroad orientated suspension.

Given the small stature of the Jimny it’d be easy to assume that the rear two seats are for show only however those of you with more than one passenger are in luck. You can quite easily get two children back there and if you’re willing to squeeze their legs in, two adults will fit as well. Head room is fine due to the tall roofline and there’s no issues with cramped shoulders as the Jimny is strictly a 4 seater. Getting in and out is also no challenge once the front seats are folded out of the way. 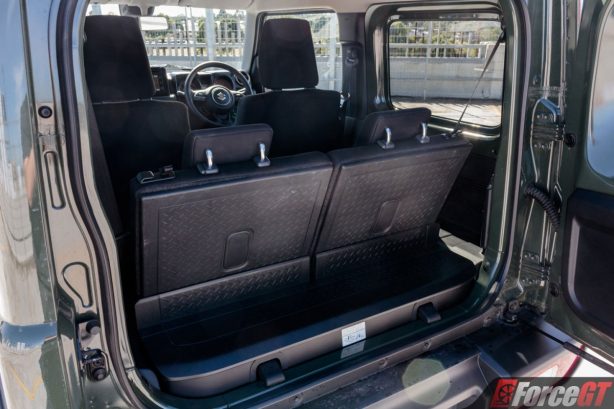 Odds are those rear seats will be spending the majority of their lives folded flat to bring up the initial rear storage space of 85 litres to a far more usable 377 litres.

Visibility when driving the Jimny is decent due to the tall driving position and both large windows and mirrors. The thick A pillars can get in the way occasionally but all other angles aren’t an issue and the reverse camera sorts out any reversing challenges that may arise. 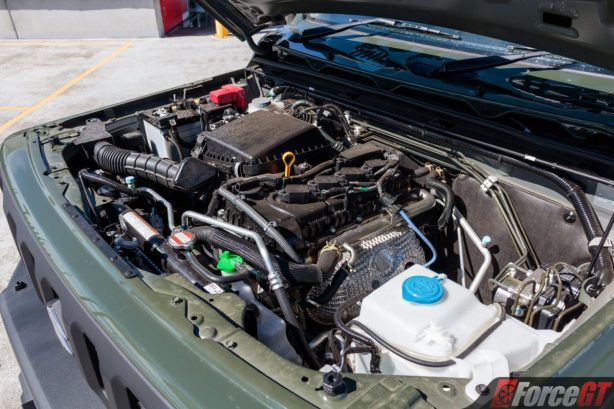 Tucked under the Jimny’s engine bay lies an atmospheric 1.5-litre four cylinder petrol engine that’s good for 75kW at 6,000rpm and 130Nm of torque at 4,000rpm. Not mind blowing figures by any standard however when combined with the Jimny’s 1,110kg kerb weight performance becomes acceptable day to day requiring just a heavier foot than usual to keep up with traffic. Most of the torque is available low down in the rev range where you’ll need it, rev the engine out and power builds linearly before dropping off slightly at the top.

Low weight and a small engine generally produces respectable fuel economy figures and our test figure of 7.0L/100km backs this up, just shy of Suzuki’s official 6.4L/100km figure. You’ll be hard pressed to find a petrol 4×4 that can match the Jimny here.

As a manual the gearstick has a lengthy throw between gears though you’ll have to be patient with first gear as it’ll get crunchy when rushed. The clutch is light and provides a long slip zone making the Jimny an easy to drive manual overall and the manual is the one to get as off-road the additional control makes it all the more capable. Braking performance has been optimised for off-road as well as the pedal has a large window of operation which can feel vague ordinarily yet offers finer control over bumpy surfaces where you need it. 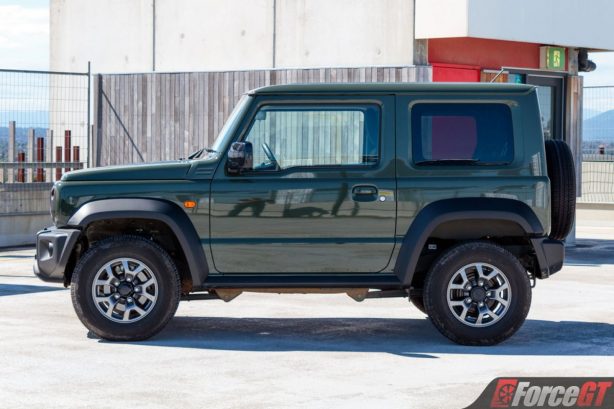 Just by looking at the Jimny you should be able to get a good sense of what the handling situation is like. It’s honed for off-road performance which means lots of body roll to allow everything to undulate beneath you as it tackles the rough stuff. The seats don’t offer much in the way of shoulder and side support to accommodate this further.

Light steering makes keeping control of the wheels a breeze and helps with comfort day to day, too. Due to the light weight of the Jimny, even though the suspension has decent travel you can’t just fly over speed bumps as they’ll definitely make themselves known.

With 4×4 low range engaged the Jimny can tackle some of the toughest terrain you can throw at it and the smaller nature of the car makes it more agile and capable than you’d expect. It also means that you’re not as well insulated from the world beneath which provides a unique 4WD experience you won’t be able to find in bigger rivals. 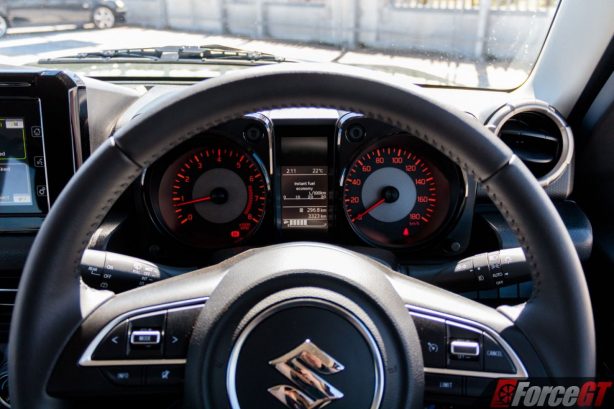 Suzuki hasn’t skimped out on loading up the Jimny with a collection of useful features and safety equipment with a handful of higher spec items making their way into the package. ANCAP testing saw the Jimny score just a 3-star rating but the inclusion of the following safety features is no doubt welcomed:

Of course it’s the non safety related tech that you’ll be using on a more day to day basis and while not extensive the Jimny sports a healthy list of creature comforts:

The infotainment system is the same unit as found in all other Suzuki’s which is basic and functional at best. It’s not the fastest system out there which is hard to ignore when it comes to typing in an address into the sat-nav thanks to the long delay between a key press registering on screen.

Audio from the system is delivered by just 2 speakers which are decent however they don’t make the most of the acoustically friendly box shaped interior. 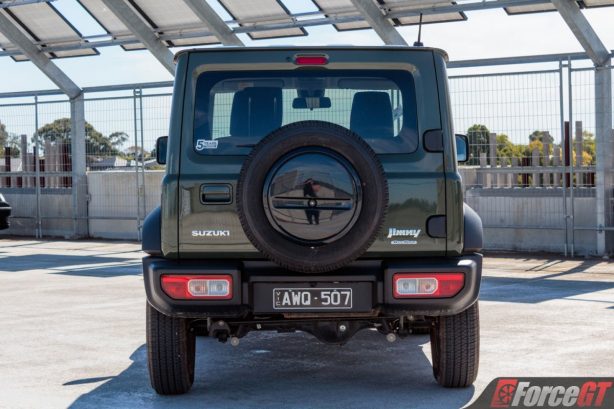 The Jimny is so full of character and capability that you can’t help but like it. It’s a cool car in its own right and the lack of competition meant that Suzuki could have just phoned it in and called it a day, but they didn’t. They went the extra mile to make make the Jimny an excellent machine that sneaks in a few bells and whistles to match.