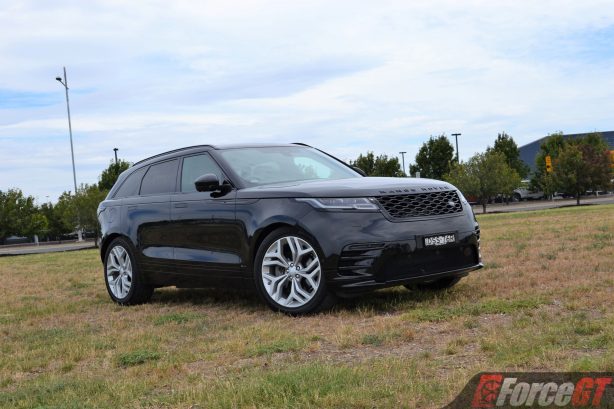 Luxury mid-size SUVs are big business these days, as affluent buyers ditch the saloon car to climb into one of these glitzy urban haulers. The segment has seen rapid growth in recent years, played by nameplates such as the BMW X4, Mercedes GLC Coupe, Audi Q5 and Lexus NX. And there’s the one model that stands out the most – the Range Rover Velar.

Plugging the gap between the smaller Evoque and larger Sport in Range Rover’s own SUV portfolio, the Velar is in the ‘sweet spot’ in terms of size, spacious enough for a family yet not too big for the cities. It’s arguably the most stylish of all mid-size SUVs, yet, being a Range Rover, it should be pretty good at the rough stuff, too.

So, let’s take a closer look at one in top-spec P380 R-Dynamic HSE guise.

Use any words to describe the looks of the Range Rover Velar and it’s most probably a combination of these: elegant, sleek, modern, expensive and even beautiful. Regardless, this thing is such a head turner. From the pioneering deploy-able flush door handles to the 3D bejeweled headlights, the Velar is a triumph of modern industrial design. It’s hardly surprising the Velar has been crowned the winner of the World Car Design awards last year. 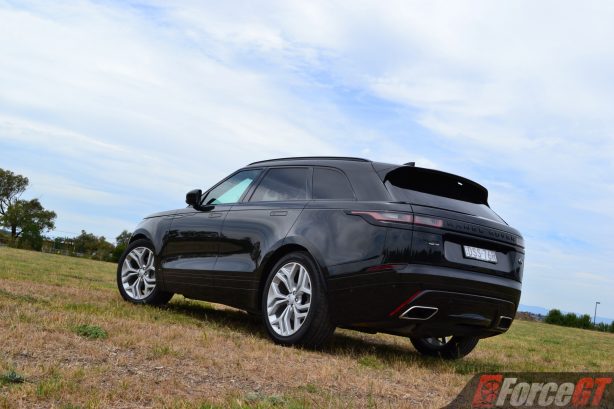 Our test car came draped in a stealthy Santorini Black paint work and rolls on optional 21-inch split-spoke ‘Style 5047’ alloy wheels. If the latter was also painted a matching gloss black or matte grey, we would have had ourselves a gangsta Velar that wouldn’t at all look out of place in the set of Man in Black.

The R-Dynamic trim brings beefier front and rear bumper design to the Velar, which we would highly recommend in order to ‘complete the look’, while LED lights are standard fare on all exterior illumination, including cornering lights, daytime running lights and fog lights.

If the Velar’s exterior is a masterpiece, then its interior is simply a work of art. There’s really no word to describe it, the Velar’s cabin is absolutely in a class of its own. And we utterly dig the beautifully crafted brown/black leather upholstery in our test car. If this interior isn’t inviting enough for you to jump in, we aren’t sure what is.

Pretty much what you see here is standard fare in the range-topping HSE trim, bar the carbon fibre with copper wire weave door trim finisher ($3,020) and configurable ambient interior lighting ($540). 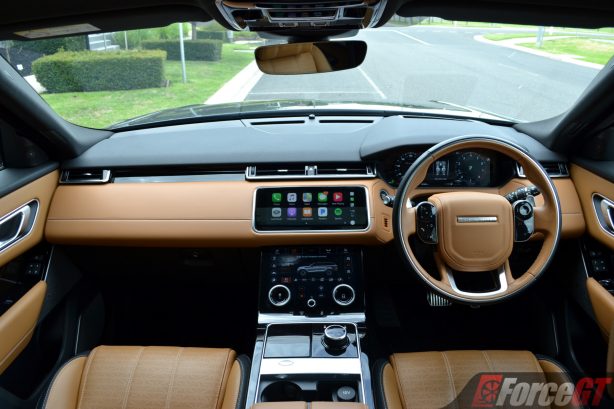 It’s certainly a screen galore up front. There’s a fully digital and customisable 12.3-inch TFT instrument cluster right in front of the driver. To its left is a 10-inch touchscreen for the infotainment system and right below it another 10-inch touchscreen for the climate control, terrain selection and various other functions. The infotainment screen rests flush with the leather-wrapped dashboard but gracefully tilts forward the moment you start the engine. The sequence reverses when you switch the ignition off. Now that’s cool.

While the infotainment touchscreen interface is fairly intuitive, the one below it takes a bit of getting used to. And you have no escape since most of the car’s functions are accessed via the low-mounted touch screen using the two rotary dials that adapts to the menu selected. It looks space-age and is a clever design no doubt, but the dynamic menu structure is not as straightforward as buttons and knobs. Comfortingly however, it deals with the controls you’re likely to use less often. 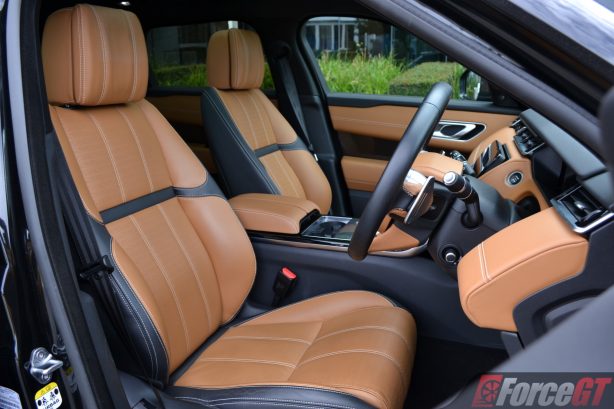 In a similar fashion to the touchscreen’s dynamic controls, the steering wheel buttons can also be re-purposed according to the function selected. They are touch-sensitive and stroke-responsive, with dynamic backlit typography and pictograms that change with the situation and function selected.

All screen graphics are super high-res and crisp, though the head-up display projection still vanishes under intense sunlight and behind polarised lenses.

The Velar is one of the longest cars in class and you’d expect that to translate to class-leading legroom. Only that it isn’t quite the case due to the bulky seats robbing precious interior space. Granted, the seats are superbly supportive, plush and comfortable, and with them subtly decorated with Union Jack motive, they also look absolutely amazing.

Headroom front and rear is vast though thanks to Range Rover’s signature straight ‘floating’ roof line that unlike many rivals, doesn’t impede on interior vertical space. Across the rear bench, three passengers can easily make themselves comfortable, although the center passenger has to content with a transmission hump, which isn’t as intrusive as some rivals. 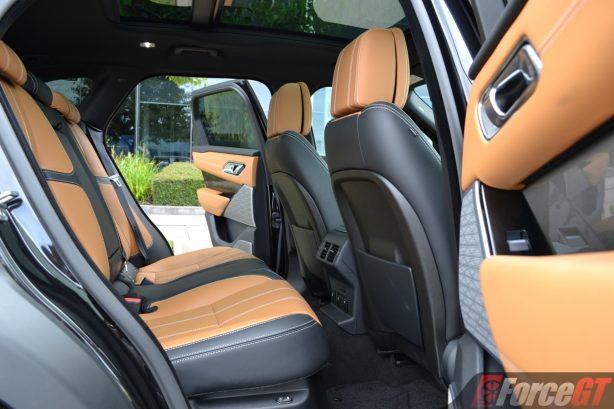 It’s a practical cabin, with decently sized storage compartments and door bins that are big enough to swallow a 500ml bottle plus some. Pop the Velar’s electric tailgate and you get one of the biggest boot spaces in class – 558 litres of carrying capacity that can be expanded to a voluminous 1,616 litres by folding down the 40/20/40 split rear seat. Air-sprung models (like our HSE) will lower automatically when parked for ease of access, too. The foot-operated hands free tailgate function however is a hit-and-miss affair.

The Range Rover Velar P380 is powered by a gutsy 3.0-litre supercharged V6 petrol engine that delivers 280kW at 6,500rpm and a stout 450Nm at 3,500-5,000rpm, capable of a hot hatch rivalling 0-100km/h sprint of just 5.7 seconds. Want anything more powerful and you’ll need to step up to the Velar SVR that comes packed with a fire-breathing supercharged V8.

With all-wheel drive, the Velar is certainly quick off the line and can continue to carry good pace well over legal freeway speeds, but it doesn’t feel that particularly fast owing to a rather muted soundtrack and a not very enthusiastic eight-speed automatic gearbox. 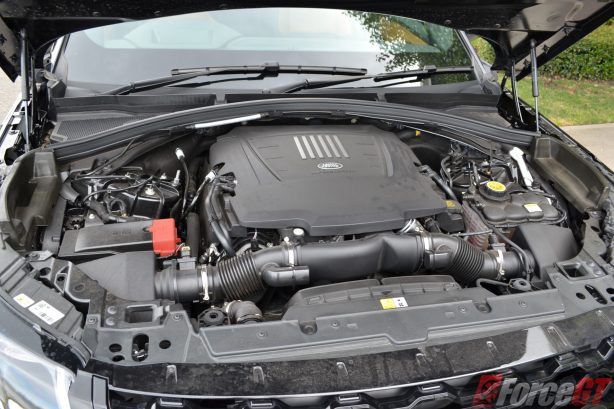 The engine itself is refined, responsive and revvy. It’s the same unit found in the Jaguar F-Type V6 S and XE S, but tuned for refinement rather that outright performance like in the sports cars. And it’s mostly fine for a big, hefty family SUV, but we’d hope the R-Dynamic badge would uncork some of that magnificent blown V6 theatrics.

All Velar V6 models come standard with electronic air suspension that lets you adapt the car to your driving style or terrain. In Comfort mode, the 1841kg SUV manages road imperfections with good damping authority, serving up a smooth and relaxing ride that is very car-like. It may be slightly wafty but there’s enough body control to prevent it from wallowing about in corners.

Flicking the drive mode to Dynamic will deliver a sharper, tauter handling that is more in tuned with the driver’s inputs, but it still lacks the athleticism of some of its rivals, including platform-mate, the Jaguar F-Pace. There’s noticeable lean in corners and you are constantly reminded of the Velar’s heft. That said, grip from those fat, sticky tyres is excellent, keeping things neat and tidy even if it’s far from being the most agile mid-size SUVs in class. 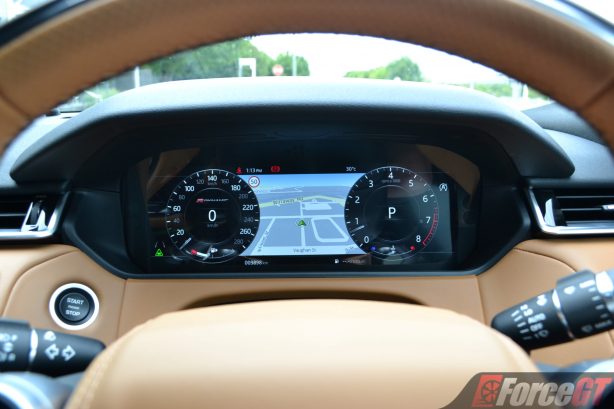 Cruising on the freeway or open roads, the V6 is near silent which leads to an incredibly hushed cabin. It’s generally peaceful around town, too, with the V6 emitting no more than a pleasant howl as the revs dance around in urban traffic.

Being a Range Rover, the Velar is also not shy of dirt and sand, although you’ll have to spend an extra $1,700 on the off-road pack with Terrain Response 2 for the pleasure. The system allows drivers to select one of several modes that optimise traction on a variety of different surfaces. They also have the option of letting the Velar sense and adjust to the appropriate combination of terrain response settings automatically. 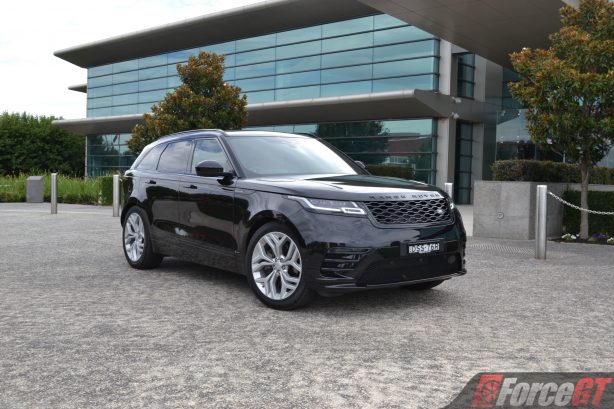 Despite equipped with engine idle stop start (that oddly hardly activates), the supercharged V6 in the P380 is one thirsty donk, averaging 11.1L/100km at the end of our week-long test. That’s over a litre adrift from its rated 9.4L/100km figure.

In terms of servicing, the Velar is eligible for fixed-price service plans for the first five years or up to 130,000km, which bring reduced servicing costs compared to paying for individual services. It also has a long servicing interval, with maintenance due once every 12 months or 26,000km, keeping running costs relatively low long after the end of free servicing.

Land Rover’s desire to bring the best styled, most glamorous and most luxurious model to the premium mid-size SUV segment couldn’t have met with more success. The Velar’s kerb appeal is second to none, and its interior is superbly rich and comfortable. It all comes with a high price, though, and just don’t expect it to be particularly sporty to drive.