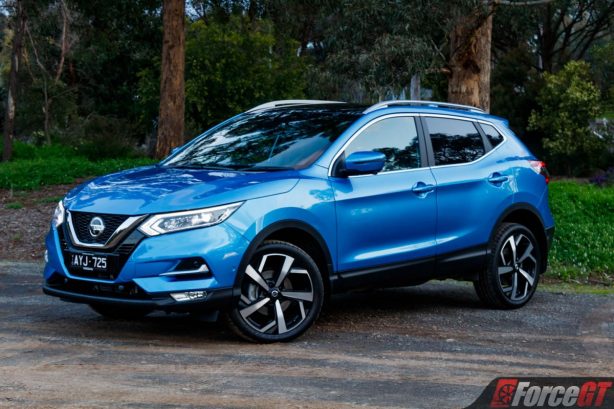 It was almost 6 years ago that we saw the Qashqai hit our shores and roll onto the roads of Australia, the oddly named compact SUV from Nissan went on to sell well thanks to its well thought out overall package and handsome appearance. Now in 2019 we need to ask ourselves if the recently refreshed and updated Qashqai still has what it takes to remain relevant in this competitive market space. 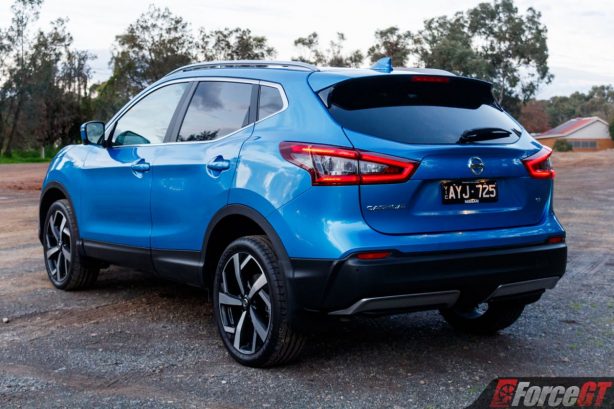 It’s the top spec Nissan Qashqai Ti that we’re testing and in terms of looks it’s managed to maintain a modern appearance thanks to the recent refresh. The front fascia scores Nissan’s ‘V-motion’ grille along with a new front bumper, the mix of piano black and chrome highlights contrast nicely against the conservative bodywork. There’s a set of aggressively styled 19-inch alloy wheels at each of the corners wrapped in low profile tyres and the rear end has been finished off with boomerang style taillights and a low air resistance shark fin antenna. 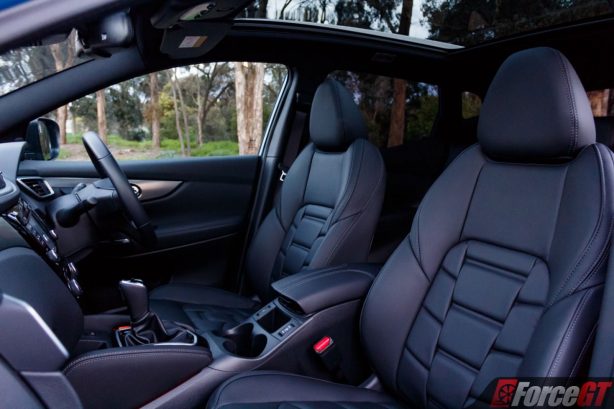 On looks alone the Qashqai has the goods to hang with its more modern rivals however does the same hold true for the interior? It doesn’t take long to realise that yes, the Qashqai has a well designed and visually stimulating interior to match its exterior that would look modern had it been released this year. I’m a big fan of the watchband styled nappa leather seats, the front two of which are electronically adjustable and heated while the drivers comes with memory settings. In Ti form the trim level is as expected, plenty of leather and soft touches where they need be and the use of hard plastics kept to minimum. The overall build quality was excellent and up to Nissan’s usual high standards with no rattles to be heard and everything tightly locked down. 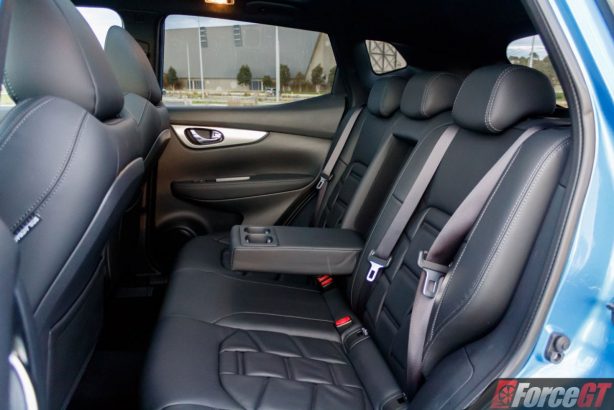 It’s in the rear where the Qashqai’s age starts to show as there’s no charging ports or air vents to be seen leaving the rear of the centre console barren. You do get two easily accessible ISOFIX mounting points and dual drink holders from the drop down centre arm rest but that’s about as exciting as it gets back here.

Shoulder and headroom are adequate for the class with only leg room lacking for full grown adults. It should be noted that while the high window sills do provide added protection they do so at the expense of visibility for the passengers and driver alike which could lead to some grumpy children.

Right in the back there’s plenty of storage with a hefty 430 litres of cargo capacity when the seats are up and a total of 1598 litres once dropped. The 60/40 rear seats can also be split and dropped separately to add to the cargo carrying flexibility of the Qashqai. A flat boot floor ensures ease of loading or removing cargo and when lifted reveals additional storage below supported by the flanking bin pockets 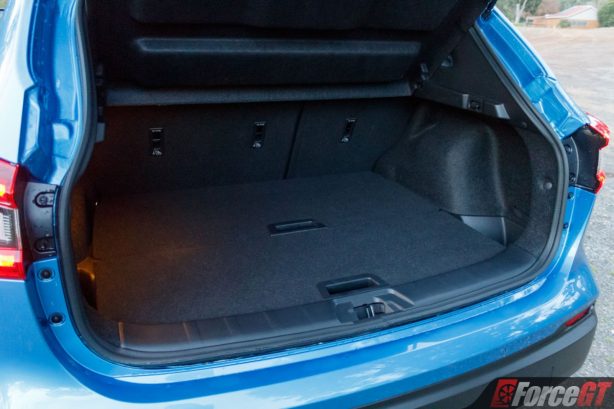 Back up front the storage situation is okay but not great which also applies to visibility. Thick A pillars at the base restrict your view and the rear C pillars do the same. With a low driving position lane changes require added attention to your surroundings. Unlike most other cars, the Qashqai has its blind spot monitoring warning lights mounted inside the cabin at the base of the side mirror mount which brings them closer to your peripheral vision, making them easier to notice, however they’re not that bright and can be tough to see during the day.

Also on my list of complaints is the lack of USB charging ports that can usually be found under the AC controls, instead they’re tucked away in the centre console storage compartment which when filled with bits and bobs makes plugging in devices a real chore. To slide back the panoramic glass roof cover you’re required to click and hold the button that operates it which takes a lengthy amount of time as the glass roof is massive and the cover moves slowly. And finally, the infotainment interface is on the simpler side of things with basic functionality lacking some of the depth, control and intuitiveness that other systems can provide. 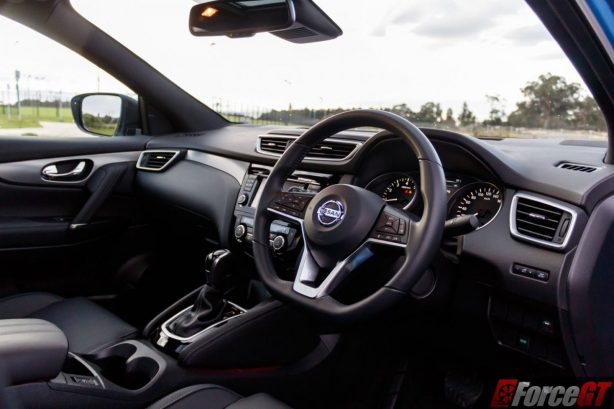 Breathing life and movement into the Qashqai falls to the 2.0-litre four cylinder petrol engine that makes 106kW when pushed to 6,000rpm and 200Nm at 4,400rpm. With both the peak torque and power high in the rev range you’ll need to push the engine to get the most from it. That said there’s enough power to not feel underpowered and the 6-speed automatic gearbox is smooth and refined in its power delivery.

Fuel economy in the Qashqai is tough to track as the trip display won’t show an overall rating per tank but rather per trip. The official rating from Nissan has the Qashqai using 6.9L/100km which is fairly ordinary figure by today’s standards. We were able to get an average of 8.9L/100km around town and a more respectable 6.6L/100km on the freeways. 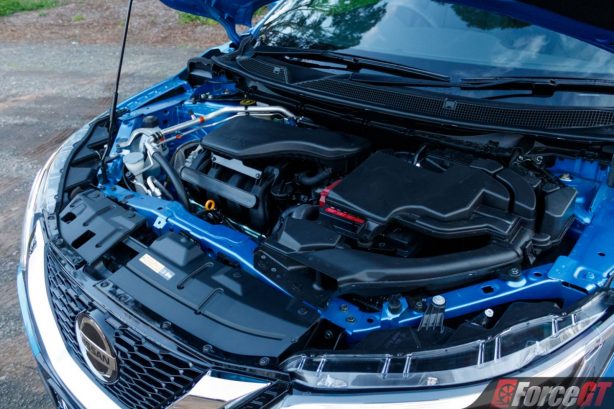 One look at those 45 profile tyres would have you expecting the Qashqai to have a harsh and loud ride, in fact things were far more comfortable than expected and both road and wind noise weren’t an issue, no doubt due to Nissan focusing on reducing the NVH levels over time. Speed bumps are softened out nicely which is tough to do for a car that weighs in at a relatively light 1,429kg. The body weight, tall profile and higher than average ride height have the Qashqai roll slightly through the corners after the initial turn in yet it remains easy to control and the overall setup is quite comfortable and composed. One area the Qashqai struggles with is tight spaces, the turning circle is larger than expected so be sure to leave plenty of room when things get cramped. 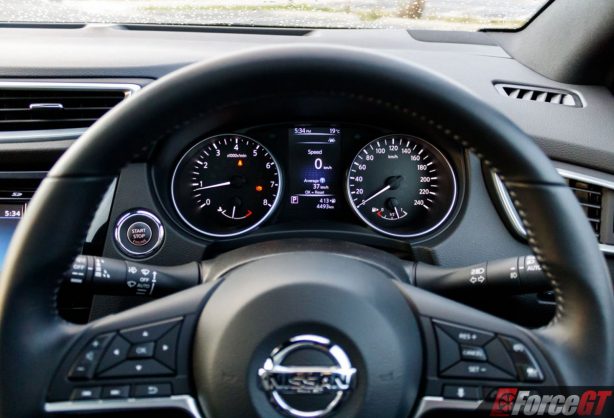 Naturally in range-topping Ti trim the Qashqai comes loaded with toys and tech which becomes even more impressive when you factor in the $37,990 price tag (excluding on-road cost). Convenience and entertainment is handled by:

Audio quality is slightly above average from the 6-speaker sound system which unfortunately does not come with either Android Auto or Apple CarPlay leaving you to rely on bluetooth or the AUX in to pipe in tunes from your phone. The other small issue is that there’s no way to put the parking cameras into fullscreen mode leaving you with a less than ideal view of the world around you. 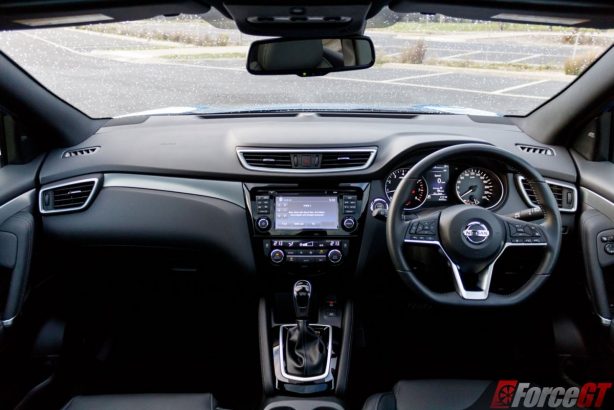 Safety hasn’t been overlooked either with a very well fleshed out list of active safety features making their way into the Qashqai. The list includes:

Nissan has done a solid job of tuning the lane keep assist system so that it’s not too invasive in your day to day driving and it’s one of the few that you’ll prefer to just leave on rather than switch off. 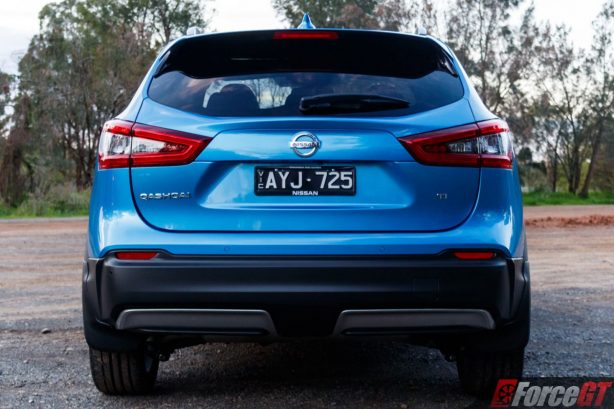 Nissan has shown that continual improvement can keep things fresh so that for 2019 the Qashqai is able to remain competitive and a tempting purchase for those looking at a small SUV. Jam packed with features and safety tech while pricing remains approachable has the Qashqai earning a well deserved space in the market.