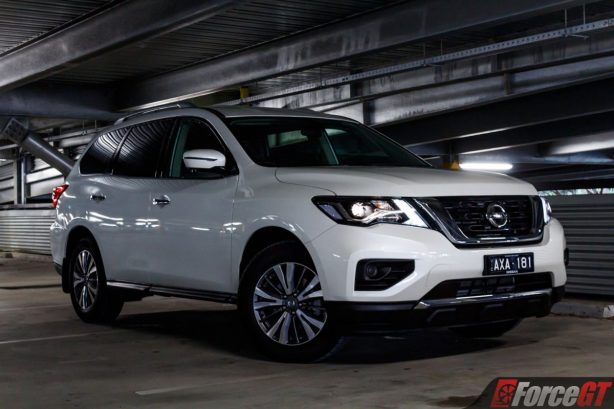 Aging it may be, the Nissan Pathfinder is not out of touch, yet.

Big seven seater SUVs bring a lot to the party for today’s active family, mix in 4WD and you end up with a jack of all trades machine that’s as comfortable on the school run as it is beating down the back trails. Nissan’s Pathfinder returns for 2019 with a safety focused refresh and a more refined package to see if it can earn it’s way into your garage.

We’ll be taking a look at the newly introduced mid spec ST+ variant which includes much of the latest in safety tech without breaking the bank. 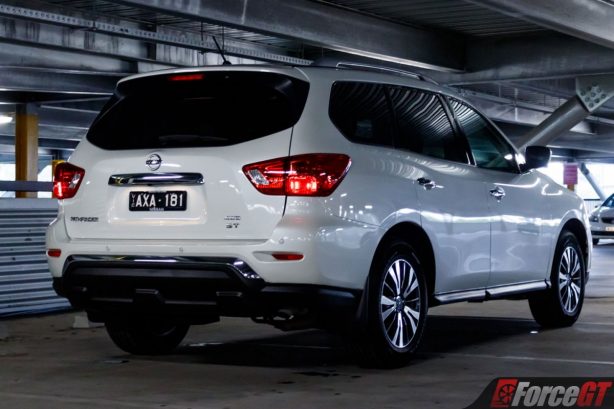 The Pathfinder is a familiar sight on Australian roads as the current model has been around since 2013. The original conservative design has aged well with the 2019 model retaining its subtle styling cues while having the front bumper and grille updated to keep things fresh. It may be large in stature however as the design is already well known and styling remains on the safe side it’s the type to blend in rather than stand out. 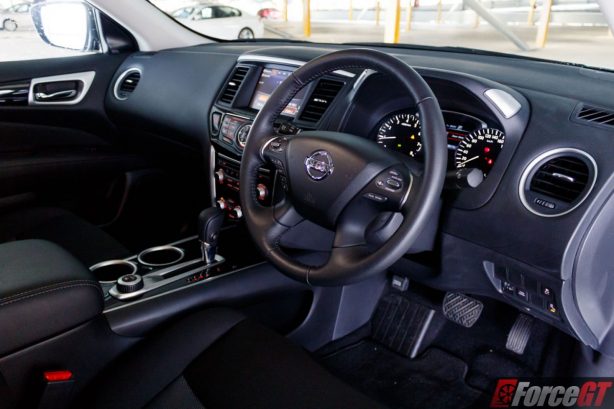 Also making a return is the spacious interior which over time has been refined by Nissan to quite a high level. You’ll be well insulated from all manner of wind, road and engine noise as the latest version of the Pathfinder has been further engineered to keep invading noises out.

Keeping the trend going, there’s extra plush cushioning on the door mounted arm rest and centre console lid which when lifted reveals a two part system of tray and storage.

The high driving position will appeal to many and helps with visibility which is needed as the front A pillars are chunky adding some challenge to agile parking maneuvers.

Unlike many others, Nissan has their blind spot monitoring warning lights mounted inside which puts the lights closer to the driver’s peripheral vision making it easier to be alerted. The downside here is that the lights aren’t all that bright, at night there’s no problem but during a sunny day they’re a challenge to see without doing a double take.

Sorely missing is a digital speed read out which could have been easily added to the instrument cluster display and I’m not a fan of the foot parking brake either when electronic parking brakes are becoming the standard or a traditional side parking brake offers more control. 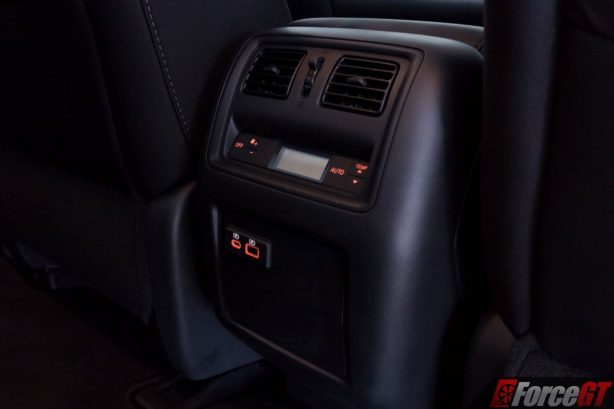 The 2019 Pathfinder shows its age with the centre console being completely overtaken with buttons, many redundant as duplicates exist on the steering wheel or can be easily accessed via the infotainment system instead. Another gripe is that every trip starts off with a warning message that must be clicked away from the infotainment screen and once you’ve done that it’ll always revert to the map rather than the last used screen.

The unit is not the fastest to use either and if there’s one place Nissan should have focused their efforts on updating, it’s here.

In contrast one area that Nissan excel at is the interior build quality. No rattles, no squeaks, everything feels very solid and well constructed, even if some of the materials are a little plasticy.

Jumping into the mid row of seats is where you’ll start to discover the versatility that the Pathfinder can offer. There’s no lack of room, with tons of head and leg room available and those lovely plush door arm rests make a return. Triple zone climate control allows the mid row passengers to set their own settings through the rear centre console mounted controls. Also mounted back here is a traditional USB charging port and a more modern USB C charging port along with 2 ISOFIX mounting points for the outer two seats. 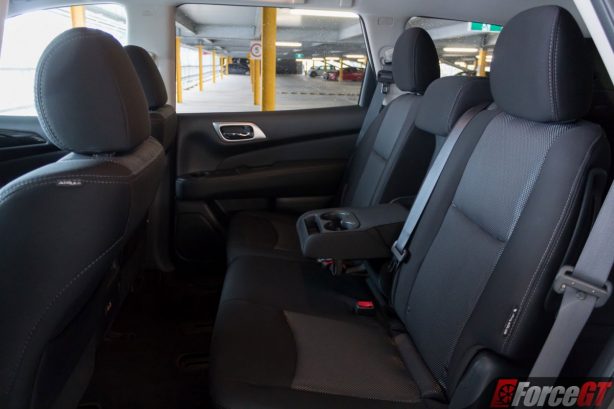 The third and final row is easy to get into and once done offers enough room even for adults. The mid row will need to sacrifice some of the extensive leg room but even fully loaded all passengers have adequate room.

There’s room to spare for cargo, the rear features a flat boot floor with tie down anchors and cargo hooks. Lift it up and a second hidden storage section is revealed which brings the minimum cargo capacity up to 453L with all seats up. Drop them all and you have a massive 2260L of storage space available to you and it’s almost completely flat making the task of loading bulky items that much easier. 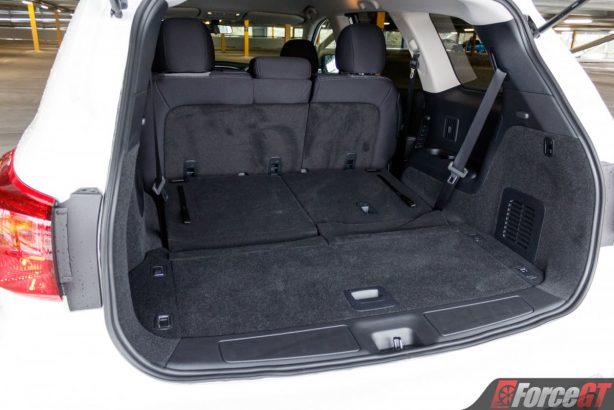 Powering the Pathfinder falls to the tried and tested 3.5-litre V6 that offers up a hefty 202kW of grunt at 6,400rpm and an equally sizable 340Nm of torque at 4,800rpm. Both peak power and torque are reached fairly high in the power band which makes sense when you learn that the engine started its life off in Nissan’s 350Z as the tried and tested VQ35DE.

With the task of lugging around two tons of family SUV at hand, the big V6 still provides plenty of get up and go and makes a great note while doing it. Fuel economy though isn’t amazing with our figure averaging 10.4L/100km for combined urban and freeway driving, quite close to Nissan’s claim of 10.1L/100km.

Power is delivered to the road via the CVT automatic gearbox which smoothly and quietly gets on with the job. Towing capacity clocks out at 2,700kgs with a braked trailer and the combination of big V6 and CVT are more than up to the task. As the name entails, the Pathfinder has been setup to have its suspension handle the odd bumpy dirt road while still maintaining a smooth ride on regular roads. This means body roll is very noticeable as you approach the available grip from the tyres which is higher than you’d expect for such a large car.

Road feel is muted through the steering wheel though it’s weighted well and doesn’t feel too heavy or light. The Pathfinder’s long wheelbase and 4WD mean it was never going to have a tiny turning circle so tight parking does become difficult. For tight situations like this the intelligent around-view monitor comes in handy, four cameras work together to give a top down 360-degree view of your surroundings. 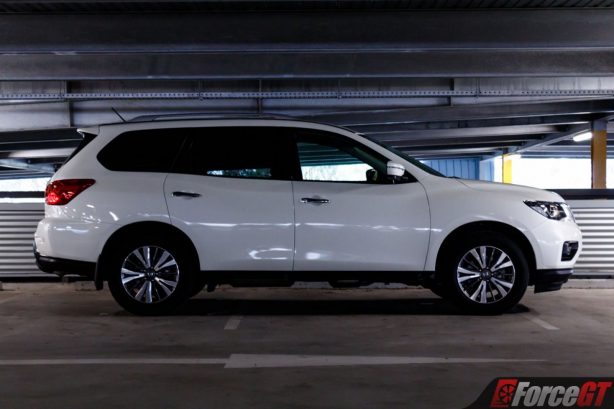 The saying that you can’t teach an old dog new tricks seems to have lost its meaning in Japanese as the team at Nissan have loaded up the Pathfinder with a huge collection of safety and convenience features for 2019. The Pathfinder scores blind spot monitoring, active cruise control, automatic emergency braking and rear cross traffic alert.

One rather odd feature is the 3.5mm video in jack that’s tucked away in the centre console, the same type you used to connect your Playstation to the TV with. This one just boggles the mind as I can’t for the life of me name one modern portable device that even has a 3.5mm video out port.

The infotainment system makes use of an 8-inch touch screen with 6 speakers to pump out beats and the whole system sounds good with above average audio quality. Sadly there’s no DAB+ to make the most of it and both Android Auto and Apple CarPlay are missing, too. The unit is GPS sat-nav equipped which is hampered by its age and the experience is slow and clunky to use. 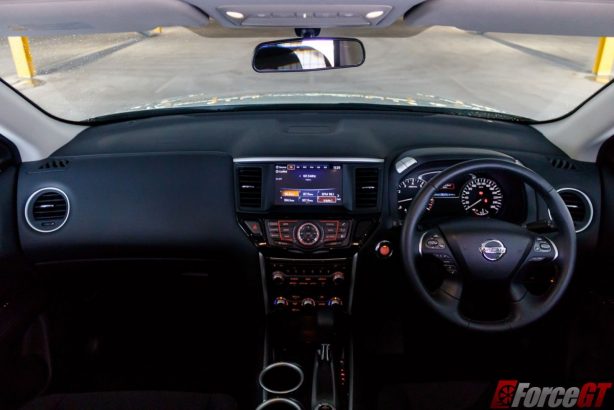 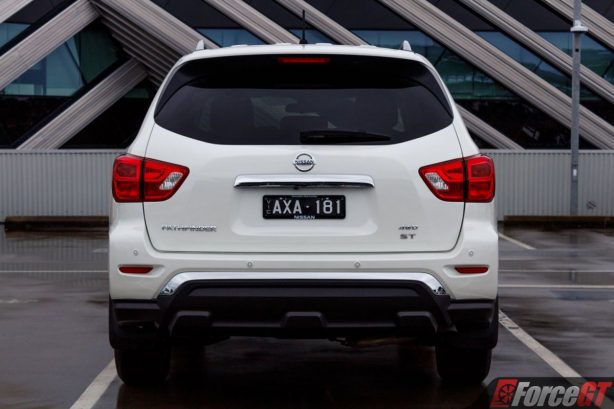 The 2019 Nissan Pathfinder is the end result of years of refinement and minor improvements culminating in a package that is surprisingly high quality with a few legacy oddities carried forward through the years. Nissan knows this and that’s why the Pathfinder, specifically this mid-spec ST+ variant, is priced to compete making it a compelling option for those in need of 7 real seats in their SUV.