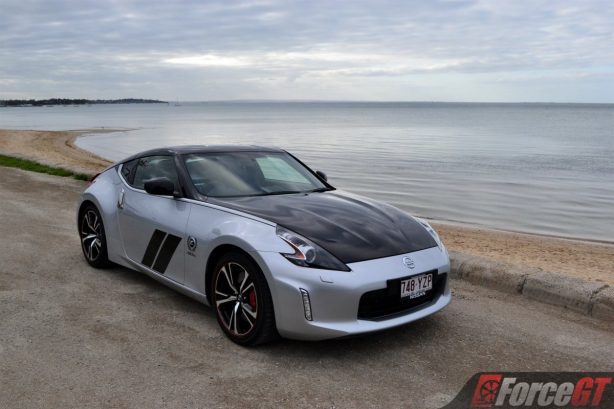 Silly money for these Japanese old timers you might think? These modern classics emerged from an era where Japan was the epicenter of the car world. They were among the many other fun machines that sealed Japan’s place and status in the automotive world map – Honda Integra Type R, Toyota MR2 and Mitsubishi Evo, just to name a few.

That era is gone and they aren’t making any more of these sports cars. Well, with the exception of Nissan. 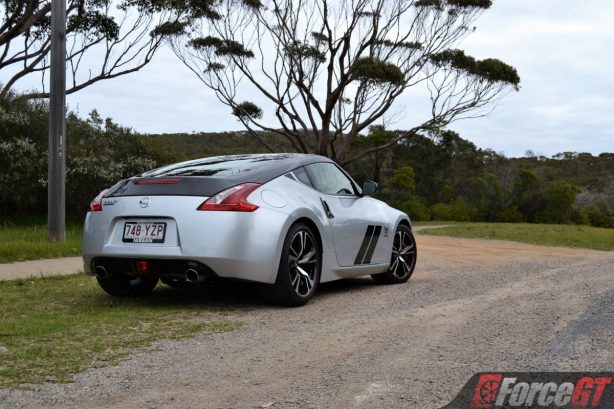 The Nissan 370Z first made its debut at the 2008 Los Angeles Auto Show as the successor to the previous 350Z, and 12 years later today, you can still pick one up from your local Nissan dealer for just $50,490, brand new complete with warranty and the lot. The engine and gearbox are exactly the same as the show car from LA, so are the interior, the instrumentation and the infotainment system.

In fact, the current sixth-generation of the Z model has soldiered on long enough to make it to its nameplate’s 50th birthday. The Nissan 370Z 50th Anniversary Edition celebrates the Z’s long heritage that dates back to 1969 when the first Z was introduced under the Datsun brand. It was followed by the 240Z, 260Z and 280ZX, before the first Nissan badged 300ZX arrived. It was succeeded by the 350Z which went on sale at the start of the century before being replaced by the 370Z in 2008. 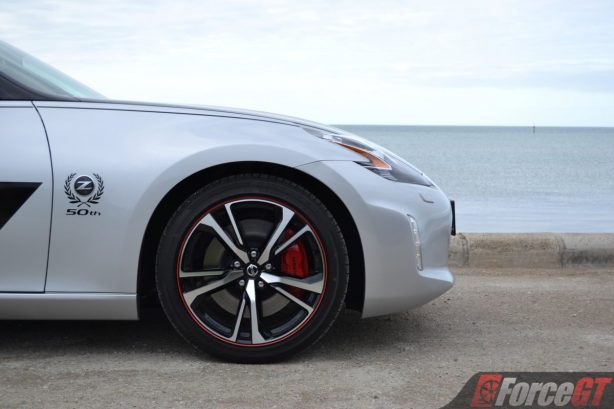 The 370Z 50th Anniversary Edition is priced at $53,490 for the manual variant, and $55,990 for the automatic alternative. All prices exclude on-road costs.

Paying homage to the Datsun 240Z that won the 1970 and 1971 SCCA National Championships in the US, the 370Z 50th Anniversary Edition is available exclusively with a choice of two distinctive two-tone colour schemes, in red and white, and silver and black. The latter is what we have on test here.

In photos the special edition might look like a regular 370Z with some stickers, but in metal the sports coupe actually looks rather special. We’re not so sure about the red and white colour combination but we really dig our silver and black version. The black painted bonnet, roof, hatch and side mirrors give the Anniversary Edition a sleeker look than the regular Z, with the car looking lower and less bubbly. The rear spoiler delete also makes the rear of the car look cleaner and less tacky. 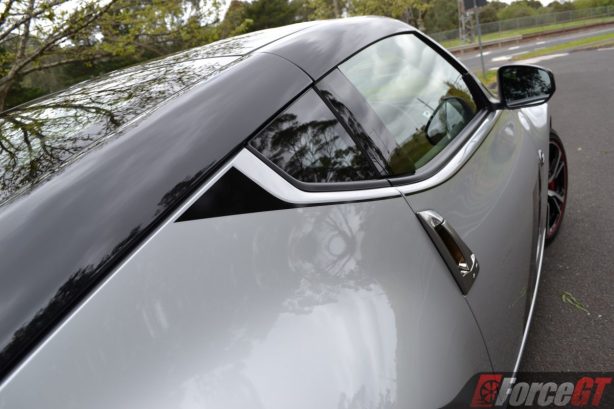 Along the side of the car, a thin line runs from the headlight to the rear glass, culminating in a small triangle inspired by the C-pillar of the Datsun 240Z. It’s complemented by two signature stripes on the side of the car. While the ForceGT team is split on the decors, I certainly don’t mind them as I think they complement the black roofline very well.

Exclusive to the Anniversary Edition, the updated 19-inch wheels incorporate red rings, matched by red brake calipers tucked within. No special edition model is complete without some obligatory badges and thus the 370Z features 50th anniversary badging on the rear and the indicator surrounds on the front quarter panels. 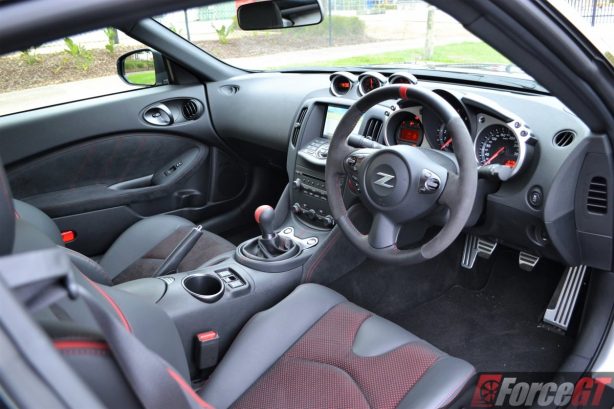 Inside, the 370Z 50th Anniversary interior gains exclusive details that highlight its special edition status. It includes red leather mesh on the seats incorporating the 50th anniversary wreath around the Z logo, red stitching on the doors, knee pad, C Cluster and steering wheel – the latter also adding the red centre mark as seen in the 370Z Nismo, and red highlights on the shift knob and the shifter boot, plus a 50th anniversary logo.

An anniversary logo is also featured on the tachometer, while dark chrome Z logo is included on the kick plates.

The anniversary details are nice yet there’s no hiding of the interior’s age. While things like seating position and cockpit engagement are still undoubtedly sporty, the switchgear, instrumentation cluster and all the rest of the cabin are very last decade. There’s not a proper driving multi function display, the infotainment interface is dated and there’re just too many buttons. 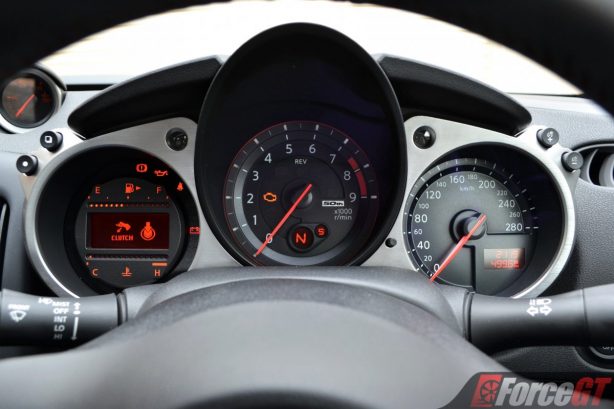 Fortunately, the materials are still good, with soft touch surfaces adorning most of the dashboard and door trim including stitched leather wrapped centre console and suede upholstered door cards.  The leather/Alcantara wrapped steering wheel looks the business and feels lovely to hold, while the aluminium foot pedals further add to the sporty ambient and are nicely weighted if not a little further apart for heel and toe.

Fit and finish is also solid, as can be expected of a Nissan, with tight panel fitment and tactile surfaces. 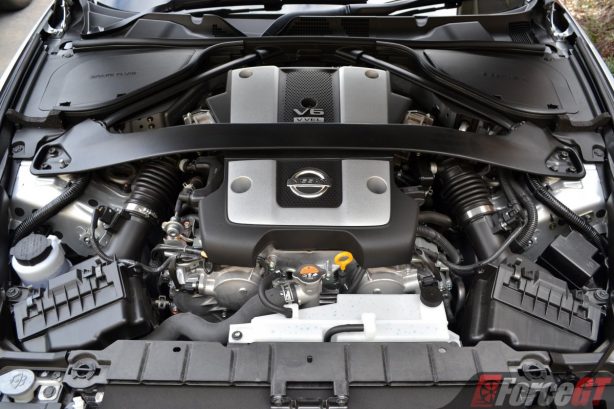 We’re back to old-school once more when it comes to the powertrain. As mentioned earlier, the normally aspirated 3.7-litre V6 under the bonnet has not received any update since launch, not even with this special edition model. That said, the 245kW of power it makes at 7000rpm is respectable, so is the 363Nm of torque. Because the latter only arrives at a high 5200rpm, you will really need to work this thing to keep pace with today’s turbocharged sports cars.

And we’re not complaining because the Z revs hard, so hard that when you thought you’ve hit the peak at 7000 revs, there’s still another 500rpm before redline. Throttle response is sharp as expected and power build up is linear all the way through. Sure, its zero to 100km/h sprint time of 5 seconds plus is fast but not blistering in today’s standard, there’s something about making big engines spin really fast that you just don’t get in a smaller force-fed unit, as every squeeze of the right pedal feels like an accomplishment.

The accompanying soundtrack isn’t as enthusiastic though, as the V6 sounds more like a piece of industrial machinery than a highly strung sports car engine. Afraid not however, as there’s huge aftermarket support for the Z which would fix the noise issue nice and easy. 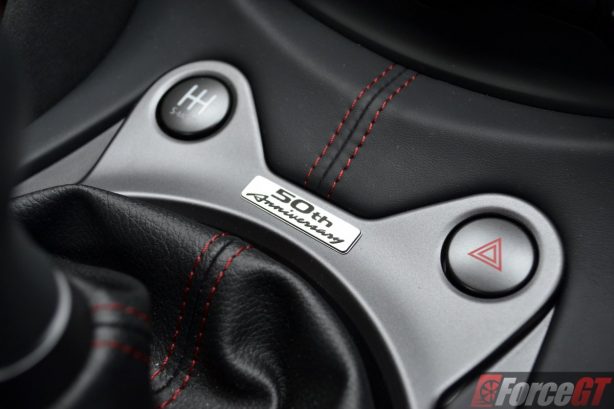 The six-speed manual the V6 is matched with feels mechanical, which is good, but the gruffness that accompanies it isn’t. It just isn’t as slick as today’s modern manual gearboxes. Nevertheless, the short throw is welcoming and the shifter is nice and grippy. With auto rev matching (can be turned off) and a relatively light clutch pedal, working through the cogs is still great fun. Don’t forget there’s also the automatic option if you’re not that keen on DIY shifting.

Perhaps what impresses the most is the way it handles. Throw a set of corners at it and it quickly becomes clear that this is an out and out sports car, pure and simple.

The steering response is encouraging and the hydraulic assisted setup makes for good, unaltered feedback. The brakes bite hard with a good progressive feel and weightiness through the pedal. Those combine with that beautifully locked down front end and rear-wheel drive to serve up a truly assuring and entertaining drive, with loads of grip all round, flat cornering stance and quick direction changes.

That said, the 370Z is all about bare-chested approach to things, and less about finesse and precision. It’s not quite as well balanced as say a Toyota 86 or Porsche Cayman, certainly not as sharp to drive, but the Z is raw and that is good novelty these days.

With taut underpinnings, the drive around town is firm for the most part with a thin level of compliance to make it still acceptable as a daily, if it is going to be one. 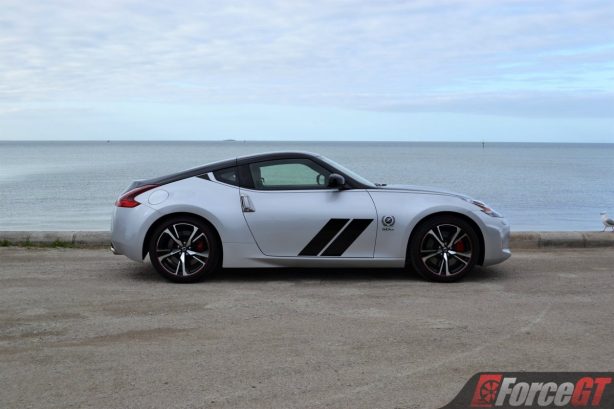 There’s no doubt the Nissan 370Z has gone way past its expiry date but this 50th Anniversary Edition may just be special enough to add to one’s car collection. And only time will tell whether or not it’s going to be worth silly money further down the track like its fellow Japanese old timers. But one thing is certain, the Z is still a heap of good, old-school fun.