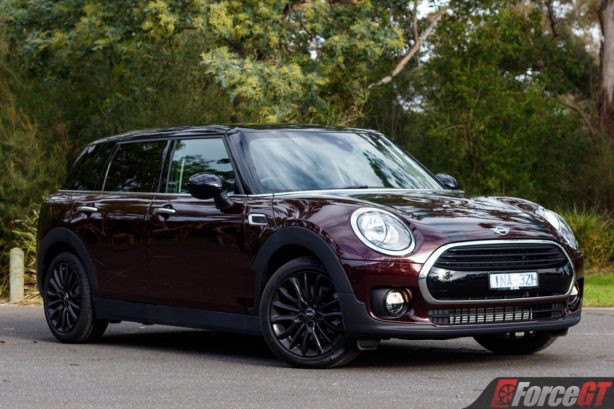 Cars brimming with character are far and few in between making them somewhat of a rarity. This makes the ones that unabashedly flaunt their style stand out all that much more. The latest 2019 Mini Cooper Clubman starts off at an accessible $37,900 plus on-road costs which becomes all that more impressive when you take a look at what’s included. 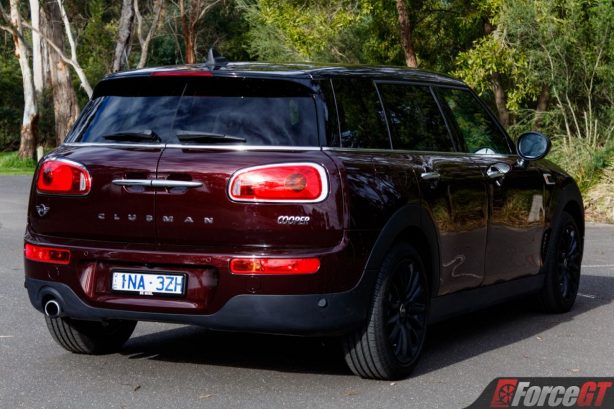 From the outside the familiar and iconic shape is instantly recognisable and looks like nothing else. There’s a modern take on many classic design elements from the headlights and black multispoke wheels to the bonnet striping and two tone roof. Durable plastic guard linings and a sensible ride height are par for the course for a car that’s pinned as both tarmac and light off-road friendly. 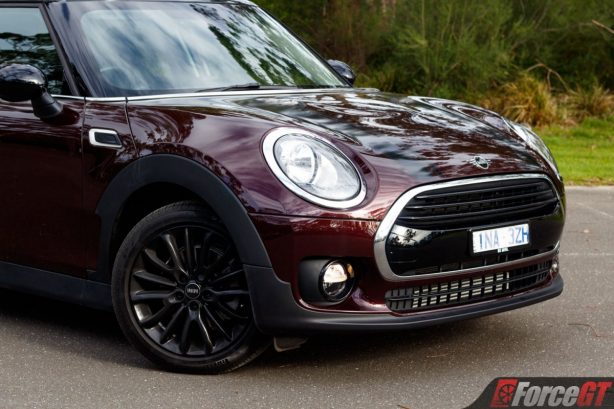 The styling amplifies several levels once you jump into the cabin and the name of the game here is circles as they’re used extensively everywhere. We’re talking instrument binnacle, wheel controls, door handles, infotainment display, climate controls and more all having been given the 360-degree treatment and I’ve got to say the end result is charming and unique.

Material choice and switchgear is premium in nature, with many components sourced directly from parent company BMW. Bringing a real cockpit feel to the interior is the band of toggle switches located in the center console and just above the mirror, all of which are a tactile joy to use especially the red start switch. 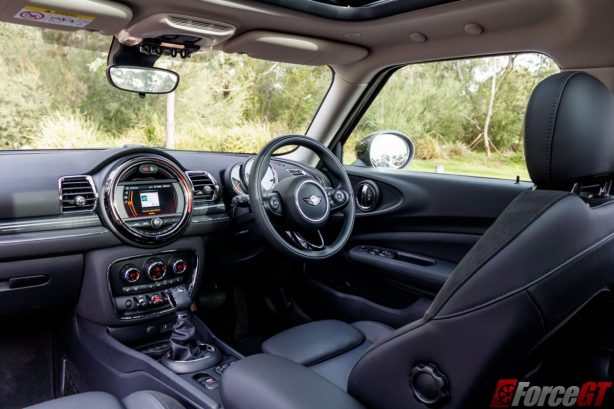 Front seating is comfortable and supportive with the caveat of being manually adjustable only, the only electrons you’ll find in these seats are dedicated to the optional seat warmers.

In terms of visibility the Mini Cooper Clubman is lacking due to the large B and C pillars while the split rear doors add one more visual obstacle to your rear view mirror. More often than not you’ll need to rely on the reversing camera to negotiate your way out of car parks and driveways. This isn’t the easiest task to accomplish as the screen isn’t that large at only 6.5 inches and the reverse camera feed doesn’t take up all of the screen. To further compound this the side mirrors are small in size and I found myself just craning my neck out the side to back up more often than not. 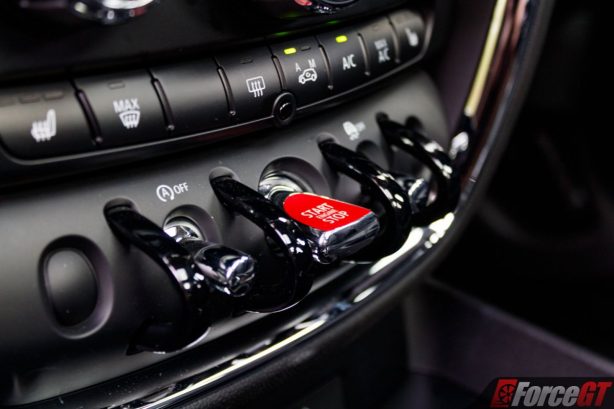 For rear passengers there’s excellent headroom and the legroom is decent enough to not leave you cramped as a full grown adult, while for children it’s excellent. Tablet addicted kids will have to ration their remaining battery life as only a single 12v charging port is available from the rear center console. On the plus side they’ll be kept cool thanks to the rear vents and the ISOFIX mounting points are quick and easy to access for baby seats. 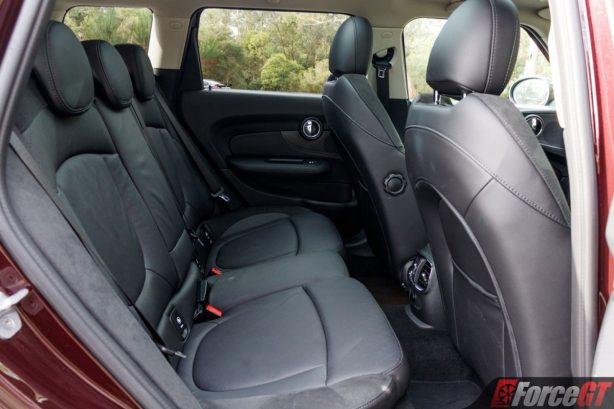 For a car holding the MINI title the cargo area is actually of a decent volume, there’s additional storage under the boot floor and the 60/40 split rear seats fold down to bring capacity up from 360 litres to a respectable 1250 litres.

The MINI Cooper Clubman brings back a lot from its past but the split tailgate seems pointless as a traditional hatch not only offers superior visibility but is also easier to operate. That said the twin rear wipers are a novelty to watch as they scurry about. 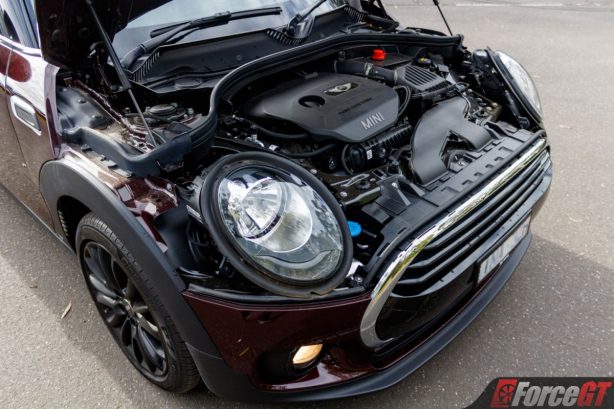 The first thing you notice when cracking open the bonnet is that it suddenly sprouts a set of holes where the headlights were, they stay fixed in place as the bonnet climbs away.

Hidden away under all of the plastic clutter lies a 1.5-litre turbo intercooled three-cylinder petrol engine that’s good for 100kW @ 4400rpm and 220Nm from 1250rpm. With numbers like that it’s no rocketship, it’s a driveable engine with good torque that’s suited for the day to day chore of low speed traffic and holds enough power in reserve to get up and moving when you need it. With an unusual number of cylinders it sounds more like a tiny diesel and isn’t very exciting to the ears.

So with a tiny turbo engine you’d expect fuel economy to be on the impressive side, it isn’t. The best I could manage was 9.5L/100km and this included a fair bit of freeway driving. That’s a long way off the claimed 5.4L/100km official rating. 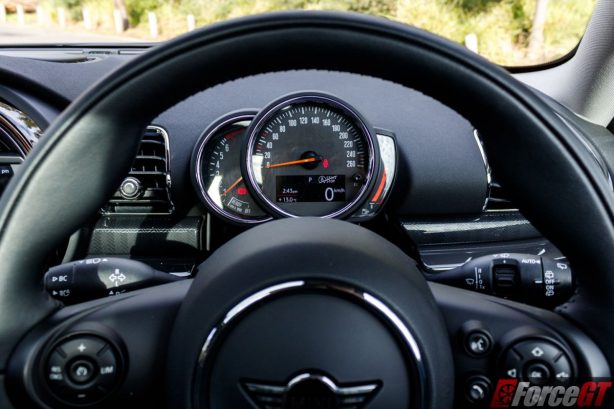 The good news is that every litre of fuel spent is spent well, the Mini Cooper Clubman is a blast to drive. It weighs just 1,320kg and comes with a firm, sometimes bumpy ride to deliver excellent road feedback. Body roll is minimised and allows you to shift the weight around for a more engaging driving experience. The steering wheel has a heavier feel to it than you’d expect which assists in providing road feel directly to your hands. Grip overall is decent and the handling felt very neutral where neither the front nor rear would break away suddenly or with under or oversteer dominating the dynamics.

The brakes too are excellent in the feedback department and combined with the robust mechanical feel of the Steptronic shifter, the Clubman makes for a fun ride that you’ll want to take for a blast when the chance presents itself. 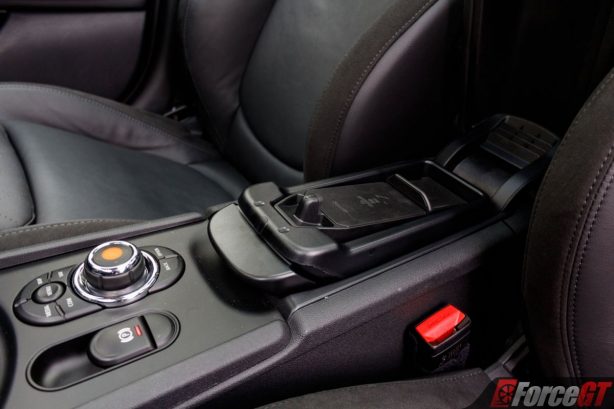 As standard you can expect:

There are 6 speakers connected to the DAB+ enabled infotainment display and as expected the audio quality is good. What’s really cool though is the lighting setup that surrounds the display and how it adjusts based on what you’re doing. Dial up the volume and it’ll act as a massive dial showing how high or low the volume is. When backing up it’ll act as a proximity warning to show how close you’re getting and when just driving around it becomes a pseudo secondary tachometer. Very Cool. 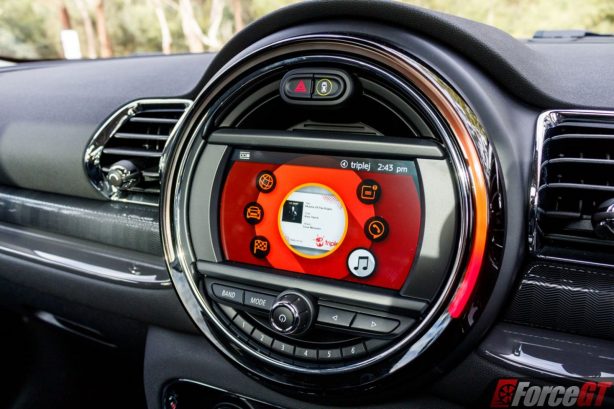 Throughout the testing duration a few minor issues did pop up that warrant noting. First up is that the dual zone climate control can’t be synced up leaving you to make adjustments twice. The electronic parking brake doesn’t automatically disengage when drive is selected and you attempt to drive off. The cruise control only allowed adjustments in 10km/h increments and finally with the sunroof cover pushed back it did rattle slightly.

But overall those are all minor complaints that are easily overshadowed by everything else the Mini Cooper Clubman has to offer. 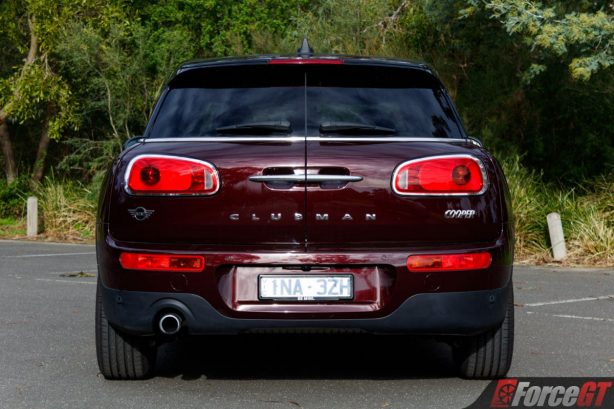 The Mini Cooper Clubman truly impresses with its charming style and great driving experience, more importantly it does all of this while still being a practical daily driver that can tackle the odd road trip. With the options packages added the price can creep up but the base package provides good value for money and offers that Mini experience that rivals just can’t. 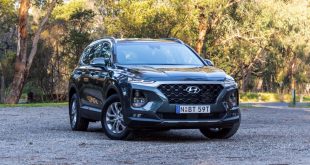 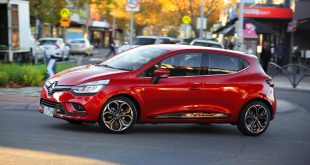