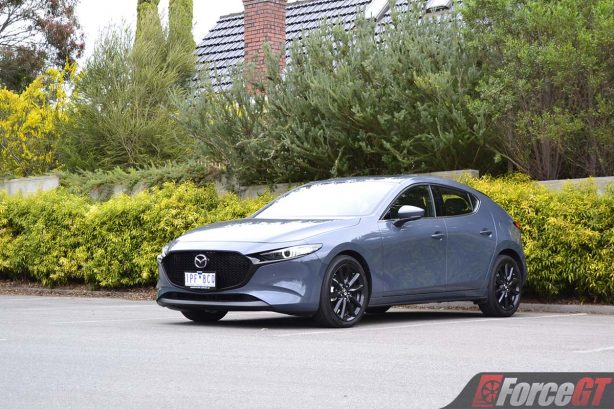 The Mazda3 is a special car. I owned a first-generation model for 8 years and its entertaining dynamics and sharp handling always brought joy to my journeys, big or small. It was one of the most stylish small cars on the road with an equally smart interior, and it never missed a beat.

Mazda has refined the formula with successive generations and while there has been some misses (we are looking at you, second-generation Mazda3), the model has consistently stayed true to its original – stylish, great to drive and well-built.

So the fourth-generation model has big shoes to fill, a task made more challenging with the changing tastes of consumers who are flocking to SUVs in record numbers. 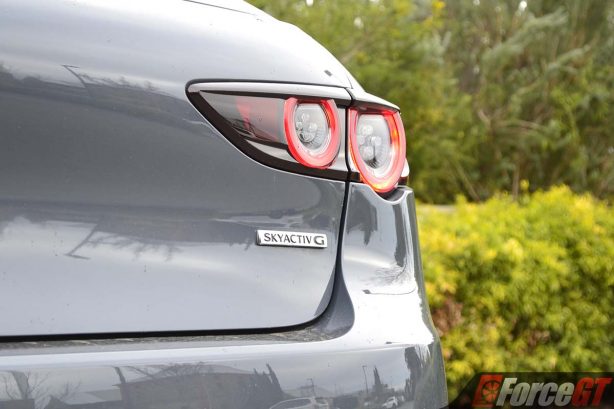 Instead of chasing volume, Mazda has repositioned the new Mazda 3 as a semi premium model, much like the Mazda6. As a result, the previous generation’s entry-level Neo that kicked off the line-up at $20,490 plus on-road costs has been dropped.

Mazda has also taken the opportunity to give the new range new nomenclatures, starting with the $24,990 G20 Pure manual which effectively replaces the Maxx of old.

And despite dwindling demand, Mazda continues to offer a six-speed manual as standard, with the automatic costing an additional $1,000. 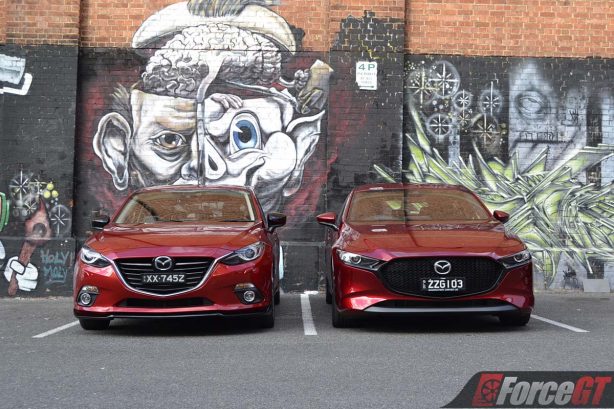 Mazda’s gradual push to more premium styling is obvious. I brought along a friend’s previous-generation model for a comparison and the difference is stark.

While the jury is still out on whether the new 3 is actually better looking than the old, there is no denying the new model looks more sophisticated when viewed side by side.

The front end is much lower than before and all variants have almost the same look, meaning you don’t have to spend extra to dress them up. 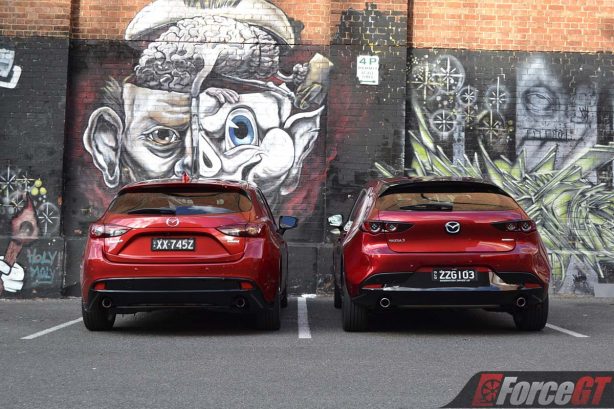 The Mazda3 hatch is undoubtedly the sportier looking of the two body styles, with a pronounced rear haunch that Mazda says make the car looks like it’s ready to pounce.

An interesting styling highlight is found on the sides of the hatch where designers adopt constantly shifting reflections to create ‘an expression of vitality’ without the use of character lines, giving the model a clean profile. 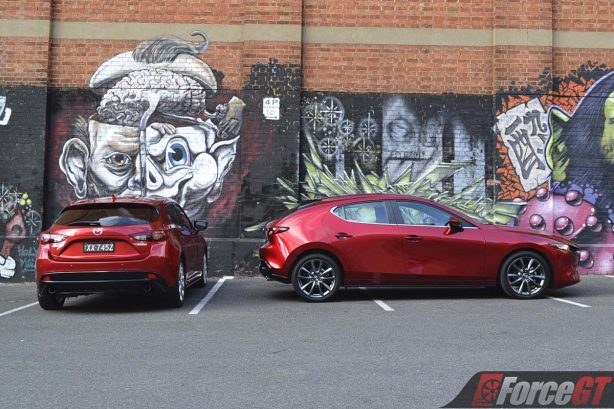 The powerful C-pillar, while giving the car solid road presence, is a little heavy handed to my eyes. As a result, despite running on 18-inch alloy wheels (16-inch silver finished for G20 Pure), the Mazda3 hatch looks under tyred.

Speaking of which, if Mazda is serious about heading upmarket, its engineers need to work on the rear doors and door handles as they feel flimsy and sound tinny. Not what you would expect from a semi-premium vehicle.

It’s not often us motoring journalists who drive tens of cars a year, get easily impressed but the new Mazda3 does just that. It’s a giant leap compared to the outgoing model.

Its new interior oozes premium vibes whichever way you look and feel, and embraces the ‘less is more’ mantra. Even the large, retro look steering wheel is charmingly classy. Everything is centred around the driver, including angled instrumentation and controls. There’s even a special stereo setting to cater specifically for the driver.

All cabin materials exude quality, from the soft leather-clad dash face and door cards to the glossy black lacquer-look finish of the shift panel. The tactility of the climate control knobs also reminds me of those in an Audi, while the redesigned key fob appears to be inspired by Volvo’s.

All variants bar the entry level Pure come with a widescreen projected Active Driving Display, or Head-up display to you and me, that presents an array of useful information in the driver’s line of sight which is compatible with polarised sunglasses.

The elegant wide format infotainment screen has also grown to 8.8-inches but is no longer touch sensitive. Instead, everything is controlled via the reworked-from-the-ground-up Mazda Connect rotary dial.

It’s still as easy to operate as before with all menus logically laid out but also benefit from crisp, modern graphics that is faster and smoother. Apple CarPlay and Android Auto are also now standard.

Automatic climate control is standard on all models from the Evolve up but it’s worth noting that it takes a good 15 minutes to heat up on a cold South Australian winter’s day, which isn’t ideal.

Music is piped through an eight speaker sound system in the Evolve and Touring while the GT and Astina get a premium 12-speaker Bose Sound System with sub-woofer in the boot.

The new seats are easily one of the most supportive and comfortable I’ve ever parked my derriere on. Mazda says the seat structure was designed to support the pelvis in an upright position and maintain the natural S-shaped curve of the spine. 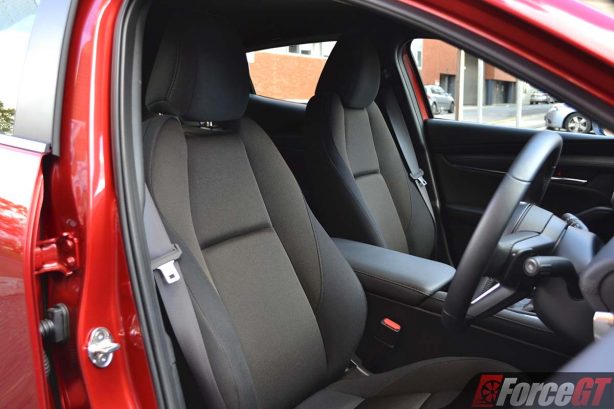 The other major overhaul to the cabin is one you can’t see – cabin noise, or the lack of. It’s been a Mazda buck bare for several generations but the new CX-9 marked a turning point with its vastly improved cabin refinement.

The new Mazda3 takes this to another level, with more sound insulation throughout the cabin. Even the springs have been optimised to prevent vibrations and noise from the tyres from getting into the cabin.

It’s an impressive achievement that makes the new Mazda3 one of the most refined in its class.

How roomy is the Mazda3? 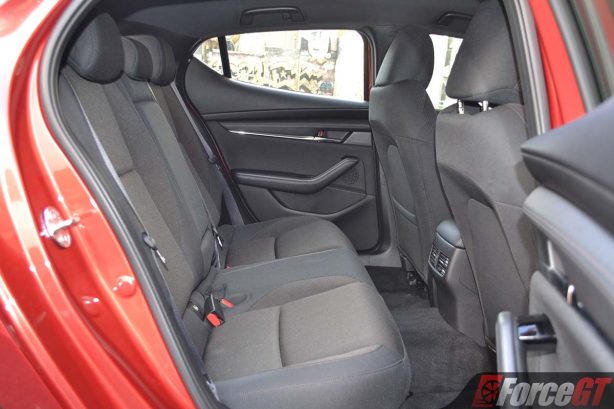 Given everything is built around the driver, compromises have to be made in other areas.

While the front seat passenger enjoys similar level of comfort as the driver, rear seats occupants aren’t quite as lucky. The steeply raked roofline means headroom is compromised for adults. A friend, who isn’t at all lofty, even brushed his head against the door opening when getting into the rear seat.

Once seated, knee room is also modest while the narrow window line makes the rear seats feel a little claustrophobic. 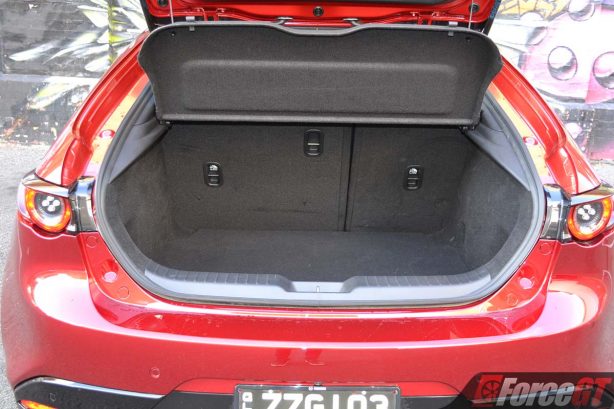 Further aback, the 295-litre boot is also sizably smaller than the outgoing model’s 408-litre luggage space. It does redeem itself with a flat floor and relatively wide boot opening. 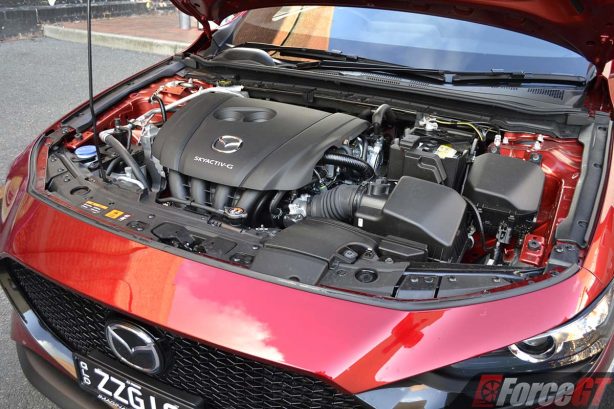 To keep things simple, just two naturally aspirated petrol engines are offered in the new Mazda3 – both tried and tested from the previous generation.

The G25’s SkyActiv-G also benefits from cylinder deactivation which shuts down two of the engine’s four cylinders when full power is not needed, such as when cruising at constant speed. The transition is so smooth I hardly noticed the difference. 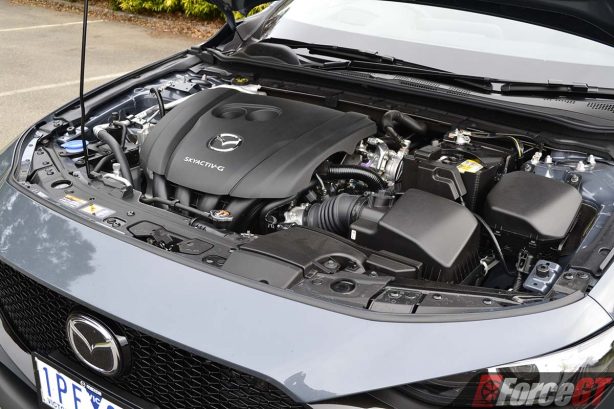 In terms of refinement, the 2.5-litre is also much quieter than the more vocal 2.0-litre, perhaps because you’re always asking the smaller engine to work a little bit harder. But once settled in, both units ticks away in a muted hum.

The idle stop/start also works well in both engines and is brake pedal adjustable – hard press to shut down and lift slightly to fire up.

Mazda only supplied the more popular 6-speed automatic for this test and both units are smooth and downshift diligently when slowing down into a corner, ensuring a smooth exit.

There are also steering wheel-mounted shift paddles should you wish to take more control and Mazda is still only a handful of manufacturers that get the manual tip shift right on the gear lever – up to downshift, and down to upshift. However, the transmission is smart enough that you would most likely leave it to its down devices. 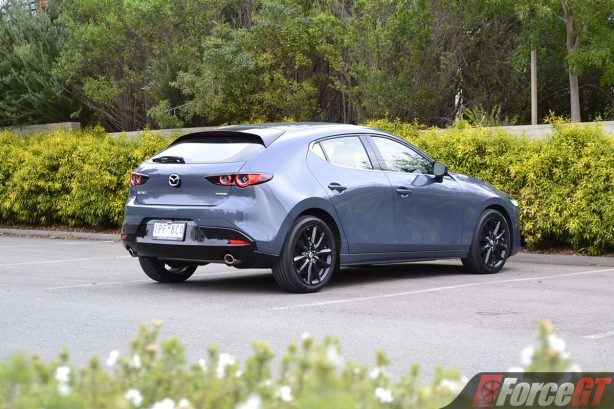 Happily, Mazda has retained one of the most important traits of the 3 and that is its dynamics.

While we have been impressed with recent arrivals such as the Toyota Corolla, Ford Focus and even the Hyundai i30, the Mazda 3 is still one of the more polished in its class.

If driving to you means more than just getting from A to B, then the Mazda3 is the car for you.

It’s steering is precise, responding to your inputs almost instantly and there’s a level of composure and dynamism that’s verging on warm hatch territory – a testament to the new 3’s excellent fundamentals and engineering.

Don’t let the naysayers fool you about the apparently retrograde step of the rear suspension changing from a multi-link setup to a torsion beam in the new model, either, because if anything, the new 3 rides and handles better than ever before.

Driving the G20 Evolve and G25 Astina back-to-back also highlight the lack of grunt from the G20’s 2.0-litre engine. You work it harder, which means piling on more revs and more noise. The larger 2.5-litre just feels a little more relaxed and suited to the 3’s accomplished dynamics.

But that shouldn’t be a deal breaker for those whose budget can’t quite stretch to the G25, as the G20 still sports the same well-sorted chassis and steering.

Mazda claims the 2.0-litre petrol engine in the hatch consumes 6.2L/100km, while the 2.5-litre engine sips 6.6L/100km on the combined cycle. Over our weeklong test, the trip computers on both test cars report a fuel consumption of 9.2L/100km.

Admitted, both vehicles were pushed hard during the test and spent about 85 per cent of their time in urban commute.

The Mazda3 is covered by a 5 years unlimited kilometer warranty and while most other makes require a visit to the service centre once every 15,000km or 12 months, which ever comes first, the Mazda3 needs one every 10,000/12 months.

Mazda has taken the 2019 Mazda3 to a new level. While it might be more expensive than before and also against some of its key rivals, what you get is a premium quality product with oodles of class, craftsmanship and safety equipment.

The G25 Evolve will be our pick with a generous amount of kit, great looks and sweet drivetrain.

Previous SEMA bound widebody Toyota GR Supra gets us excited
Next Official: Toyota 86/Subaru BRZ lives on for another generation