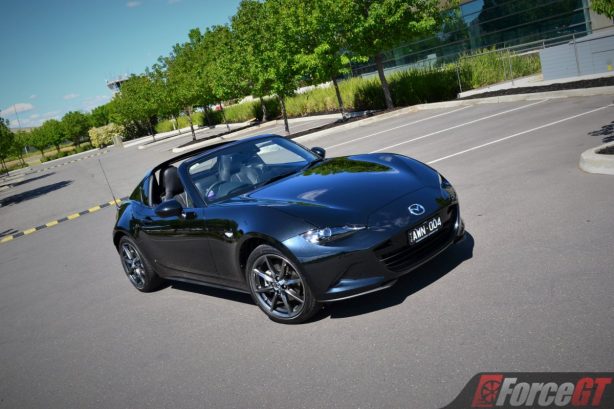 Usually, an incremental update in a car’s life means a slight redesign of the headlights, new wheels and subtle touch up of the interior trims. If lucky, we may see an updated list of features. Then the car would be let to soldier on for a couple more years until the all-new model arrives.

Not in the case of the Mazda MX-5. For the second time in a span of just two years since launch, the ND MX-5 is receiving a refresh, and not just any refresh because there’s more power, improved safety and added equipment across the board.

Like before, the tip-in point to the range is the $34,190 Roadster 1.5 manual, with it stretching all the way to $48,960 for the RF GT 2.0 automatic with the optional black roof and brown leather interior.

Our RF GT 2.0 automatic test car with the standard body-coloured roof and black interior slots in second place in the pecking order priced at $47,960. This retractable hard top model, along with its six-speed manual variant, are expected to be the volume seller in Australia with 63 per cent of takers estimated, according to Mazda. 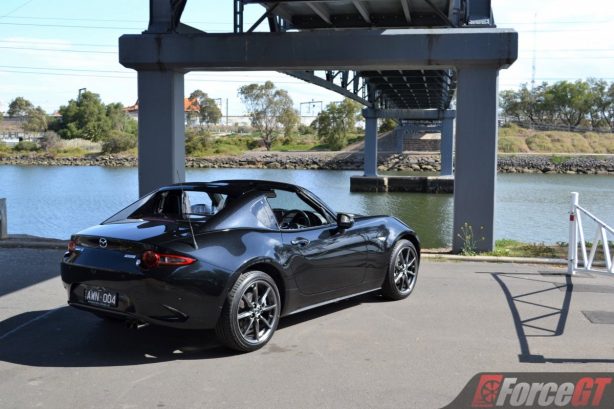 And it’s not hard to see why. The RF, which stands for Retractable Fastback, is a such a looker, regardless if the power-folding roof is up or down. While the soft-top Roadster is no doubt sexier when topless, the RF just looks so cool. Unlike most hard top convertibles of which sleekness is dialed down considerably as soon as the roof is up, the RF just transforms into a handsome coupe.

With the hard-top’s extra feeling of both security and safety, without diluting the open-top experience, count us in for one of these, too. 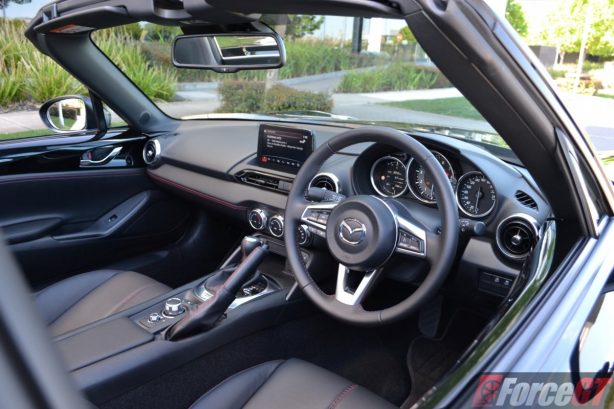 The interior is largely carried over unchanged from before – a good thing given just how great the original cabin already is. The dashboard is  classy and contemporary, the ergonomics are perfect and seats are superbly comfortable (though still lacking a little shoulder support). Our GT model is even equipped with a punchy 203-watt Bose premium sound system with nine speakers, including two cleverly mounted inside the headrests.

More importantly for a sports car, the driving position is spot on, made even better by a steering column that is now adjustable for reach as well as rake, which will no doubt be to the joy of MX-5 owners who are longer in the leg. Other welcomed improvements include more stable cupholders and redesigned sun visors, though disappointingly, there still isn’t a digital speedometer. 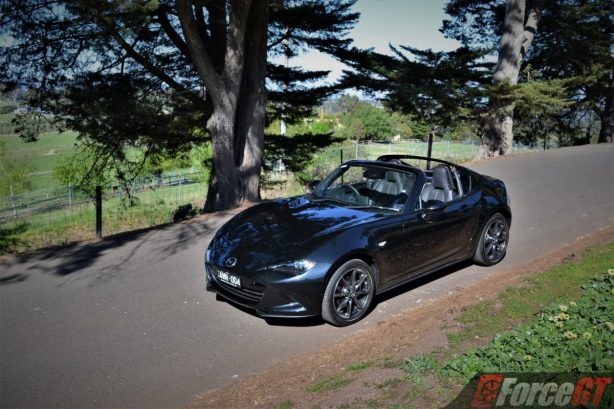 In what would come as a surprise to many experiencing it for the first time, the MX-5 is such a comfortable car in which to cruise around. The ride quality is almost as forgiving as that of the Mazda3, be it around town or in the open country roads. This is truly a sports car that can be enjoyed every day of the year.

And better still, the 2019 update sees both the 1.5-litre and 2.0-litre normally aspirated engines being tweaked to produce more power (Mazda has listened!). Redesigned piston crowns and a higher pressure fuel pump and injectors see the outputs of the 1.5 lifted to 97kW at 7,000rpm and 152Nm at 4,500rpm. While these are increases of just 1kW and 2Nm, the torque peak is now 300rpm lower, making it more accessible than before.

But it’s the 2.0-litre unit in our RF GT that will bring a much bigger grin to faces with its more extensive changes. With lighter pistons and connecting rods, a revised intake manifold, increased throttle diameter, larger exhaust ports, and a new dual-mass flywheel, power is bumped up to 135kW at 7,000rpm – a significant 17kW jump at 1,000rpm higher – while torque increases 5Nm to 205Nm at 4,000rpm, 600rpm earlier than previously. 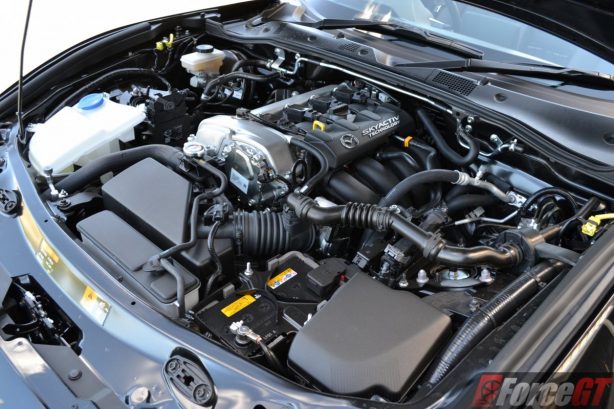 The result is an engine that now revs just as hard and as happily as its zingy 1.5L sibling. From 4,000rpm where the torque is at its peak, this thing just comes alive and shows no signs of restraint until its raised 7,000rpm cut off. The frenzy is felt most during acceleration at speeds, such as when coming out of a corner, where the added punch gives a much harder slingshot to the next bend.

It’s not just sporty driving that benefits from the increase in engine output, the car also feels noticeably better to drive around town, with the engine’s chubbier mid-range offering a stronger pull from the lights or intersections. 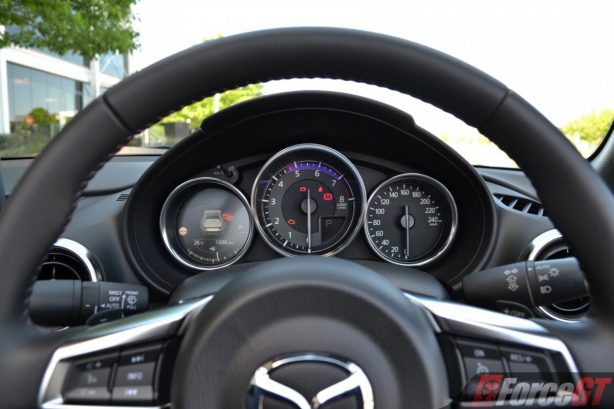 The six-speed automatic fitted to our test car is unchanged from before, but there’s no need to. This is one of the best auto’s ever fitted to a sports car, from its quick and smooth changes to its ability to pick the right gear all the time, the auto is a lot of fun in the hills, with the added benefit of taking the stress out of the daily grind. It’s nowhere near as involving and pure as a manual box, but we were pleasantly surprised with just how responsive and well optimised this automatic was in comparison.

Also not fettled is the suspension, so is the steering. While some lament its soft set up giving a tad too much body roll in corners, we think this only adds to the car’s enjoyment, as you can feel the weight transfer and almost anything that’s going on underneath thanks to its communicative chassis and steering. Mazda’s marketing talk of ‘Jinba Ittai’ about the oneness of car and driver does have some merit to it after all. 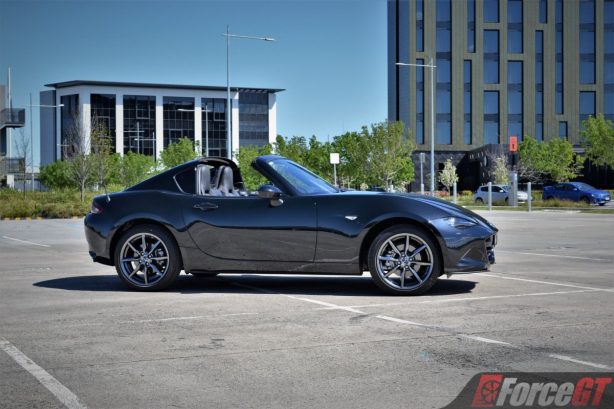 Despite the hatchback-spec 205mm wide tyres, grip is exceptionally good so you can really nail this thing into a corner with confidence, knowing that the wonderfully locked down nose would obey and the rear end ever so keen to cooperate and rotate. No doubt, this is still one of the most balanced and progressive sports cars around. We just wished it had a better engine note, as it could get grainy when revved.

Fuel economy for the MX-5 will largely come down to how it’s driven. With a regularly heavy right foot, we managed an acceptable figure of 10.4L/100km for the auto against Mazda’s claim of 7.2L/100km, which in itself is down from the 7.4L/100km rated for the previous model.

Mazda has made all the right improvements to the MX-5 to boost its appeal even further. From the subtle interior tweaks to the improved safety features, the lightweight convertible has just gone from great to fabulous. And with a zestier engine, especially in the 2.0-litre guise, the MX-5 continues to be one of our favourite sports car under $50k.