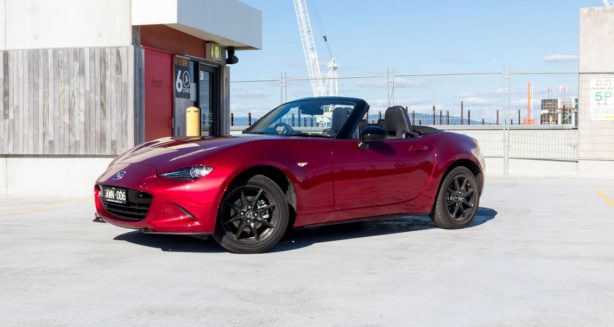 This will be the third time I’ve jumped into Mazda’s MX-5 for a week of thrashing to decipher its secrets, only now I’ve finally managed to nab the one I was most excited for. It’s the base spec 1.5L Roadster with none of the bells and whistles and more importantly, none of the weight. This is the lightest MX-5 currently available, just 1,012kg of pure sports car.

So why am I so excited for this one? Because this is the version that Mazda originally set out to create when taking to the drawing boards. It’s why they initially decided on the smaller 1.5-litre engine, only adding the 2.0-litre to satiate the American market and their lust for power. This one takes all of the ingredients that made the original so great and offers it up in a neat modern package. 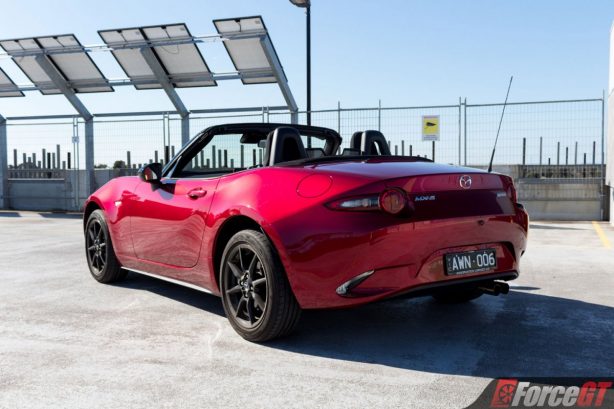 Mazda expects this base model to account for just 5 per cent of all their MX-5 sales with the Retractable Fastback expected to make the up bulk of all sales at 70 per cent. I reckon they may have been a bit too conservative as even in base spec this little Mazda has some tricks up its sleeve that its fatter, more expensive brothers can’t muster.

Tucked away in its swooping bonnet is a 1.5-litre 4-cylinder engine making the grand total of 97kW once revved out to 7,000rpm, just 1kW more than last year’s model. The 152Nm of peak torque now comes on lower down in the rev range at 4,500rpm as well thanks to a number of minor changes.

Now unless you’ve got aircraft grade G sensors built into the back of your skull you’ll struggle to notice any difference from the previous model. So while these are improvements, they’re virtually imperceptible.

To get the most from it you’ve got to keep it singing and in the right gear as the powerband starts at 4,000rpm and keeps going all the way to the 7,500rpm redline. Just make sure to take it easy when everything’s cold as the gearbox doesn’t like to be rushed in that state, once warm it feels as solid as ever with a short stubby throw between gears and a wonderful tactile shift feel. 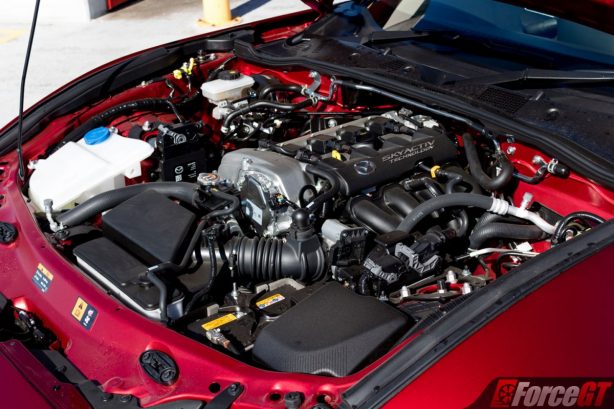 What you will notice is how little fuel the engine sips. After my week long of extra aggressive throttle use the MX-5 averaged a wallet friendly 7.5L/100km against the rated 6.2L/100km official figure. And when I say aggressive I mean I had my right foot firmly planted far more than most other cars in almost every situation, it’s a blast being able to wind out the motor to redline in almost any situation without the fear of overspeeding into corners or hitting license losing speeds. The perception of speed in the MX-5 is heightened due to the go-kart like driving position and collection of exhaust and induction noises. 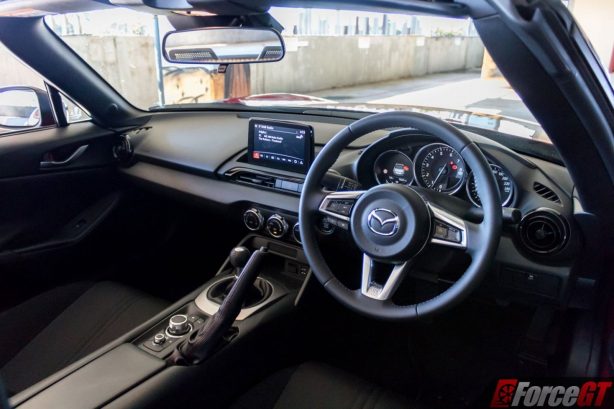 Lightweight lower powered sports cars such as the MX-5 lend themselves to a momentum based driving style. You build up whatever speed you can between corners and then try maintain as much of it as you work your way through them. Handling is light and nimble thanks to the crisp turn in and stiff chassis which is even more impressive considering its a convertible.

Mazda’s signature move in the suspension department is their progressive body roll setup and the MX-5 scores the same treatment. There’s more roll than you’d initially expect on turn in however it loads up progressively and you always have a great sense of control as you dart from one corner to the next. The extra roll allows you to get an acute sense for where the weight in the car is focused leading to more refined car control.

When you do finally hit the limit of grip the skinny Advan Sport V105 tyres transition without any surprises and the LSD lets you play with the oversteer through your right foot. 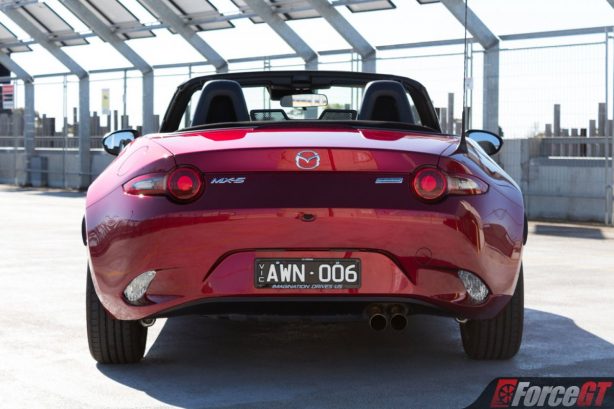 From the outside there hasn’t been too much in the way of visual changes aside from the bumper mounted rear camera that seems like it should be hidden away. It’s the same story inside, there’s redesigned cup holders that hold your drinks better but still get in the way of your elbows along with redesigned sun visors.

The main story inside is that you’ve now got a reach adjustable steering column and it makes all the difference in the world. You can dial in that perfect driving position to maximise all of the sensations the MX-5 is known for. Unfortunately Mazda haven’t reworked the pedals to allow heel and toe manoeuvres and those of you with wide shoes may find things cramped down there.

The seating situation is the same as before, a lack of shoulder support to really dig into those corners and taller drivers may have the seat belt frequently lock up which requires jiggling to reset.

There’s a sweet spot that the MX-5 has when you push it to about eight-tenths of its limits. The whole package comes together with you working in conjunction with the car to get the job done. Push it too hard though and you’ll find yourself more focused on keeping yourself in your seat than on picking the perfect line through a long sweeper. 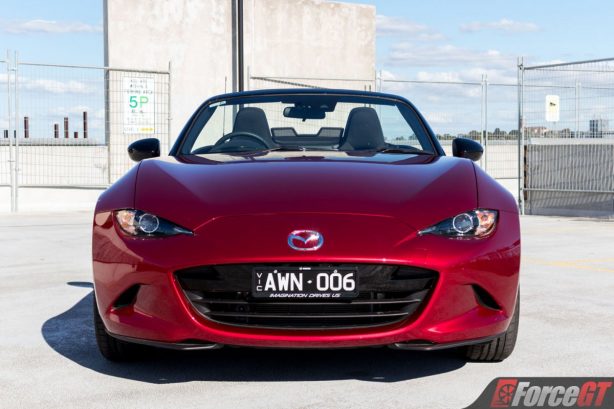 Being such a small car the interior has always been compromised in regards to functionality. There’s no door pockets, the centre console storage is laughable and anyone with a plus sized phone will struggle to find a home for it. While there’s no under dash glovebox, you do get a trio of them elsewhere, one located between the seats and two more smaller storage pockets behind them so it’s not entirely lacking.

The base spec MX-5 is punching above its weight class in the features department with quite a few nice toys not often seen in the more affordable variants.

The LED headlights are dusk sensing and the rain wipers spring into action automatically when things get damp, while speed sign recognition makes an appearance and is surprisingly useful for unfamiliar roads.

Mazda’s MZD Connect system is displayed through the 7-inch colour touch screen and still maintains it’s excellent ease of use. DAB+ digital radio is delivered through the 6-speaker sound system which is nothing special in the audio department, the extra road and wind noise of a soft-top will drown out any precision of a higher quality system anyway.

Android Auto and Apple CarPlay are exclusively optional to the sum of $494.98 which is hard to justify considering it should just be a software update. 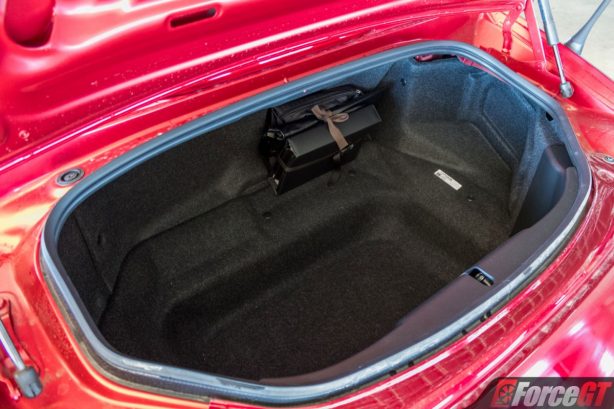 When it comes to safety, every bit counts for smaller cars and the MX-5 retains its 5 star ANCAP safety rating along with a bunch of active safety features to further assist. The big one is blind spot monitoring which pays off massively when visibility is limited with the soft-top up. You’ve also got the aforementioned reversing camera and Rear Cross Traffic Alert to help when backing out. Once you’re heading in a more forwardly manner the Smart City Brake Support (autonomous emergency braking) should help to keep you out of strife as well. 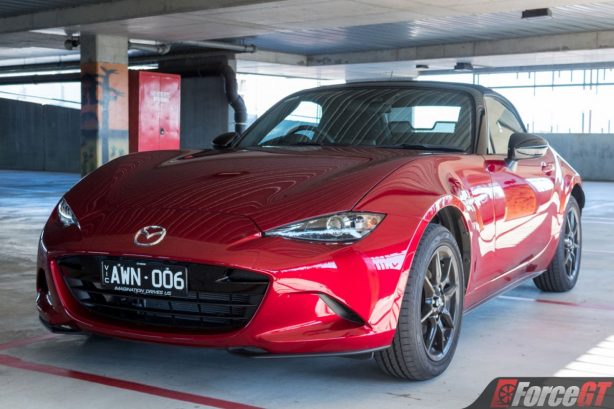 The Mazda MX-5 brings a sensation to driving that just can’t be matched by a hot hatch or coupe. You’ve got an entire atmosphere of headroom that combines with sharp precise tactile feedback for an exemplary driving experience. The amount of fun delivered for the easily approachable $34,190 asking price makes the MX-5 1.5L Roadster an absolute bargain.