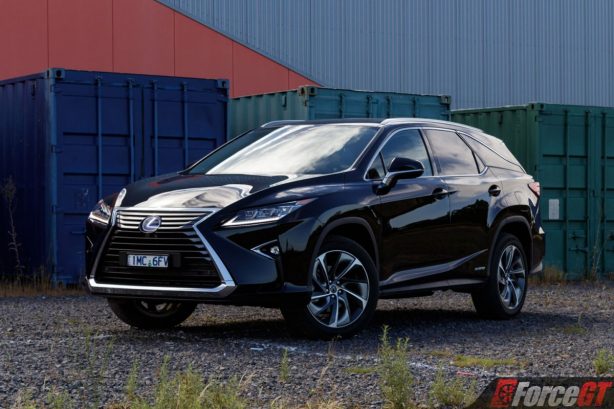 The task of designing a single car to accommodate the unique and often country specific desires is no doubt a serious challenge, one which Lexus took seriously with the RX line of luxury SUVs that continued to evolve throughout their lifespan. The European demand for ever cleaner and greener motoring saw the RX line go hybrid and now American desire for a rolling lounge room has brought a total of 7 seats to the RX, along with the post fix L. 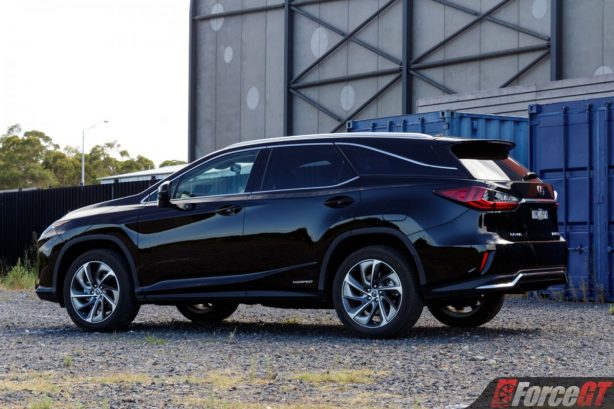 Compared to its smaller 5-seater siblings the three-row RX L looks deceptively similar until you notice the longer rear end, 110mm in total has been added to make room for the extra seats and the look is still as striking as ever before.

The current generation RX has gracefully entered it’s mid life since the 2015 launch and the daring looks have stood the test of time well. The floating roofline stretches out further in the RX L and continues to be one of the key defining design elements of Lexus’ mid-size crossover. 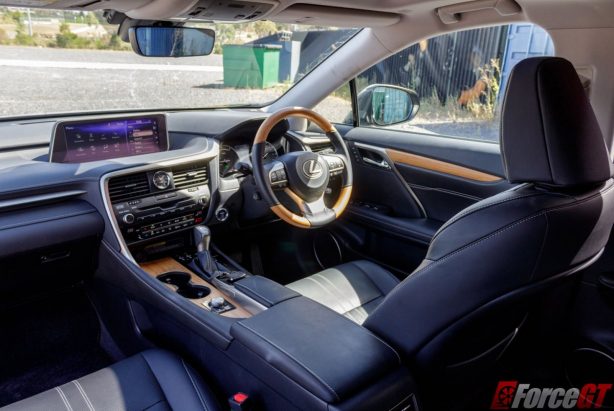 Our range-topping RX 450hL Sports Luxury pairs the bold exterior with a suitably lavish cabin. Lashings of bamboo style trimmings adorn the interior adding a splash of color and character inside with the steering wheel offering up a solid yet smooth tactile feel that stands out from the traditionally leather clad wheels of rivals.

The material choice is as before, excellent, the plush carpets, abundance of high quality stitched leather and brushed metals all mesh together to to bring style to the well thought out interior design and ergonomics.

Sitting at 12.3-inches, the infotainment screen will have no problems grabbing your attention and the additional screen real estate is used effectively thanks to the configurable split screen mode that allows a primary large section and secondary smaller section to display separate information. Unfortunately it’s still operated exclusively by the Lexus Remote Touch Controller (LRT). In theory it’s a brilliant bit of technical engineering, a floating trackpad button that provides magnetic feedback to simulate the visual menu system. In practice it’s far too clicky and sensitive to be used intuitively and Lexus has already moved on to a touchpad system in other models with the RX line missing out for now. 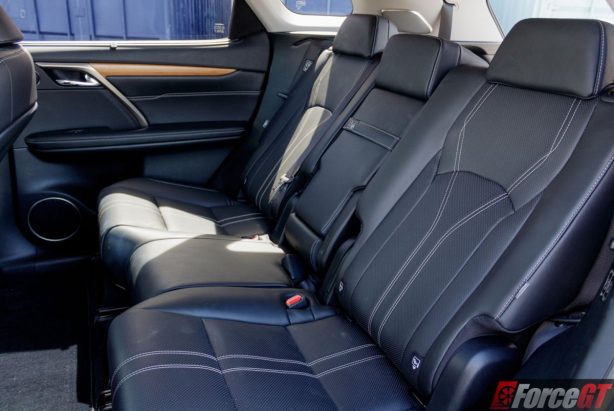 So it’s still a case of business as usual up front however the addition of an extra row of seats has changed the game up in the rear. There’s no lack of room for mid row passengers, the sliding and reclining seats make sure of this. And thanks to the twin electric motors from the hybrid powertrain located at the rear, you get all-wheel drive without the usual space robbing driveshaft tunnel running the length of the car, great news for middle seat passengers. 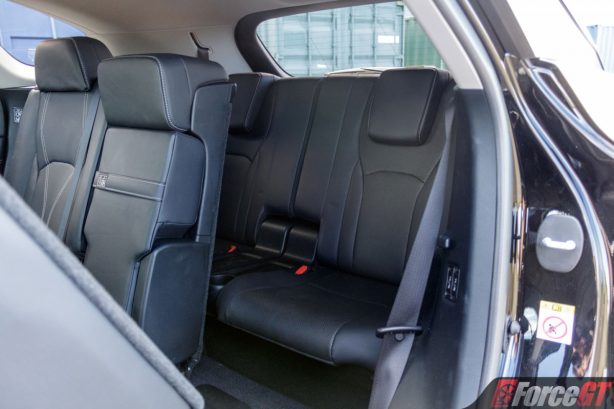 The big question with the RX L is how usable and versatile are those third row seats?

Even with the extra 110mm of room provided from the extended body, I wouldn’t want to be parked back there for any serious amount of time. Leg room is the issue as there just isn’t enough space to go around. With the mid row slid forward things are improved but only marginally so, best to leave row three to the children.

Getting them in and out isn’t too much of a challenge, a quick lever pull has the middle row of seats slide forward and out of the way. A climate control panel can be accessed from the passenger side and both seats score drink holders to keep the pint sized passengers happy. 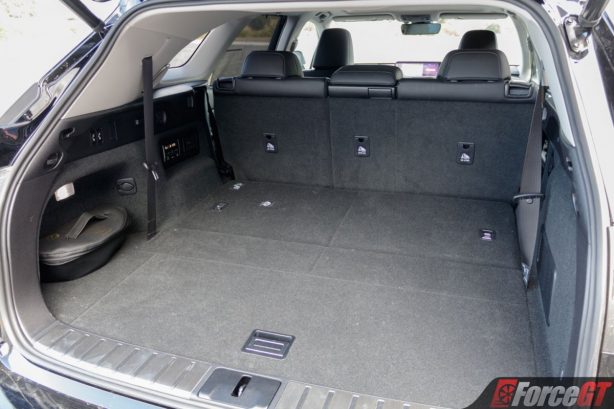 Once you’re back down to five or less you can open up the cargo space by dropping the rear seats electrically, though they do take their time to fully extend or retract. With the third row seats up there’s just 176 litres of cargo volume that can open up to a far more usable 591 litres with the seats down.

Unlike some rivals, Lexus has provided a storage section under the rear floor for the cargo cover so you no longer have to store it in the garage when not in use. 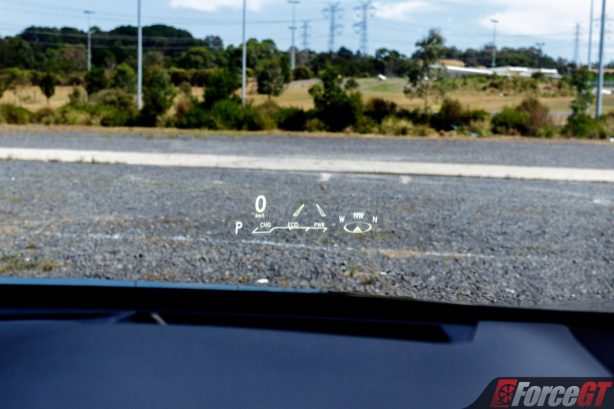 Back in the drivers seat you’ll find visibility is very good for such a large SUV. The relatively thin A pillars and lower mounted mirrors give plenty of visual feedback for tight parking and the array of cameras dotted around the body work together to create a surround view to keep things scratch and ding free. The bird’s eye view can be activated with the dedicated camera button.

As always there’s room for improvement with any interior and this is no exception. Where rivals are offering panoramic sunroofs the entire Lexus RX lineup only has access to the standard sized sunroof and there seems to be a few redundant buttons added to the steering wheel that only interact with the fairly simple trip display interface.

Cruise control is operated by the same stalk as found in many Toyota’s where wheel mounted controls would be superior. And I’m not sure why such a nicely crafted interior has a slab of plastic used for the DVD player face plate, it just looks out of place against the more upscale metals and leather. 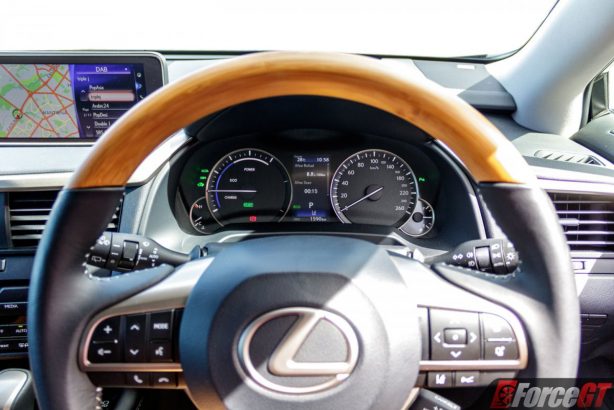 With the extra seats and larger body comes more weight leaving the powertrain to deal with a greater workload so acceleration performance in the RX 450hL is hindered against the 5 seater variants. The 3.5 litre V6 brings 193kW of power to the party and combines with the twin high-torque electric drive motor-generators for a total of 230kW and 335Nm of torque. There’s premium performance but more would be ideal for fully loaded drives. For that the RX 350L might be the better option. 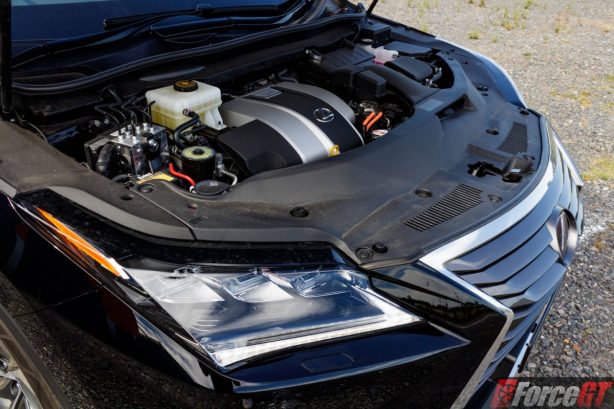 Lugging around nearly 2.3 tonnes of Lexus would leave you expecting a thirsty fuel bill but thanks to the hybrid powertrain the RX 450hL isn’t that big of a drinker. With a mix of freeway and suburban driving the big Lexus managed a respectable 8.4L/100km, not quite as impressive as the official 6.0L/100km figure Lexus claims is possible but to be fair, I didn’t touch the eco mode once and I’m no light footed driver either.

The other advantage of the hybrid powertrain is that the idle start-stop process is near seamless, initial acceleration is handled electrically with the V6 only kicking into gear once things get moving. There’s even the option to go 100 per cent electric if you’re willing to keep the speed and acceleration down, a useful feature for stealthy driveway exits. 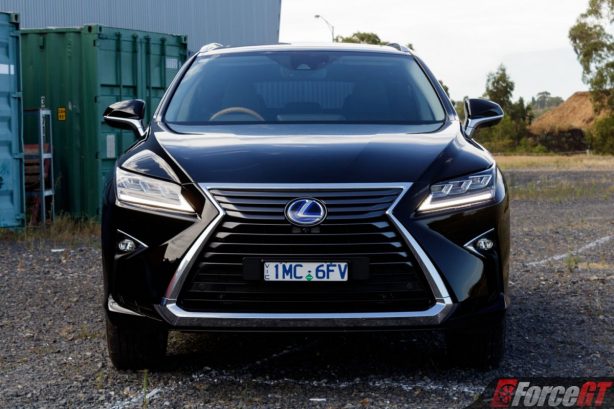 All that weight and the high riding SUV body was never going to have the RX 450hL win any awards of agility in the handling department. Instead Lexus has focused on providing a platform that can handle varying qualities of road with comfort and they’ve done a solid job on that front. Gravel roads could be traversed confidently and with reasonable comfort if speeds were kept in check and out on the Australian roads you’d swear you were driving through the perfectly paved streets of Tokyo. The body roll can become noticeable if you push things too far yet control was never felt lacking even on loose surfaces.

Unlike it’s European rivals, Lexus don’t hide all their toys behind an expensive options list, instead you get virtually everything right out of the box. Stepping up the grade from Luxury to Sports Luxury does add a little more to the package: 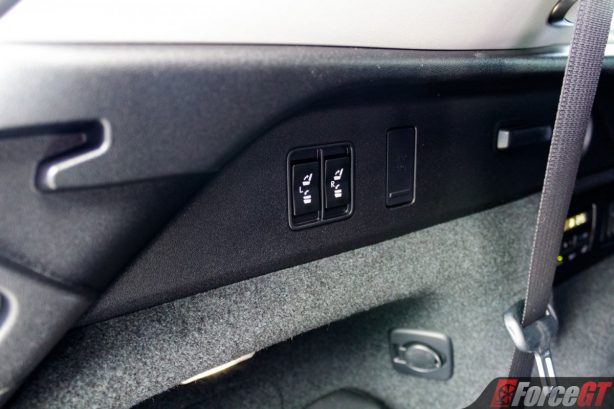 The big ticket item here is the beefed up sound system which is sublime and sure to enhance whichever sound track you choose to accompany your driving with.

When it comes to the standard features a few stand out simply because of the care taken during development. The Lexus Lane Keep Assist system is one of the pack leaders as it integrates well with regular driving only activating when you’ve strayed far off centre. Both the automatic electronic parking brake and proximity entry just work without any additional finesse needed, some manufacturers still haven’t got this down needing some assistance. 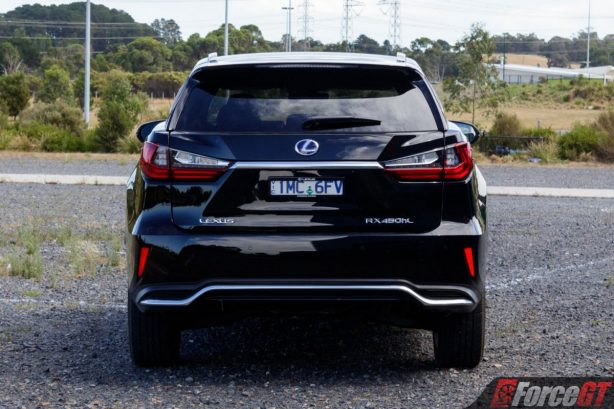 Naturally the focus of the RX450hL is on those two extra seats however that extra storage space when they’re tucked out of the way seems far more important.

The big Lexus ticks almost all of the boxes needed for an excellent all round family SUV, it’s chock full of toys and tech, is both efficient and green and does it all for a price that European rivals can’t match.