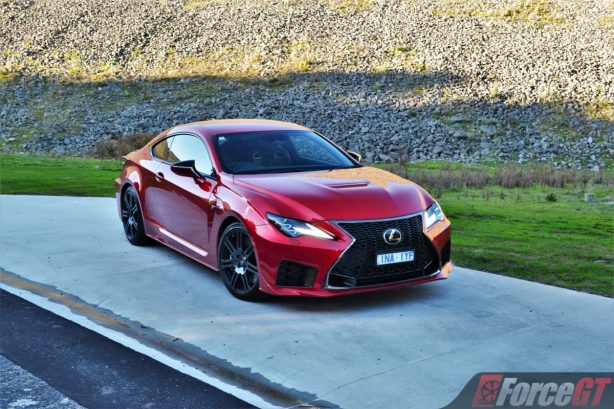 The Lexus RC F is the Japanese luxury marque’s baddest and most potent offering since the ballistic LFA supercar. It’s rivals are all Germans, namely the BMW M4, Mercedes-AMG C 63 Coupe and Audi RS 5 Coupe. And instead of trying to be one of them, Lexus chose to forge it own path, everything from the way it looks to the way it drives.

The 5.0-litre V8 up front is a naturally aspirated unit, there’re no turbos. The 8-speed auto is a conventional torque converter gearbox, not a dual clutch. And it’s 0-100km/h time of 4.5 seconds is just a tickle faster than today’s hot hatches. Yet, the Lexus manages to feel special, brilliantly different.

Oh and the looks has not a single resemblance of its rivals. Some love it, some loath it, but we’re definitely the former, so are a lot of people to whom we have shown the car.

But there’re a few issues with the pre-facelift model launched in 2015, it’s too heavy and feels more grand tourer-ish than sports car. And so the car has undergone quite an intensive update for 2019 with the aim of addressing those shortfalls. Lexus has even launched a Track Edition to give its rivals a run for their money. 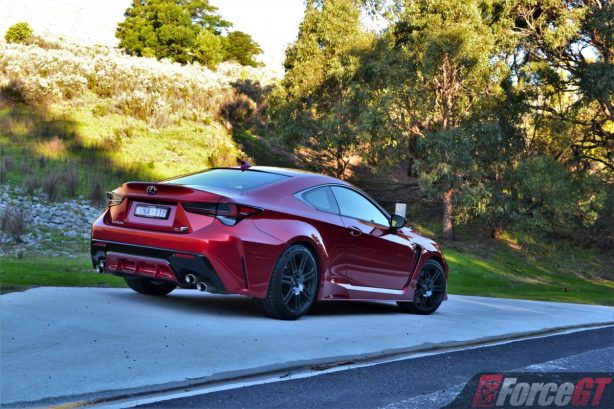 Lexus’ intent to sharpen the RC F is apparent even in the way the new model looks. The whole car has been given a racy makeover, with it looking much meaner and focused than before. The refreshed styling incorporates redesigned LED headlights and a wider grille, mimicked in the rear with reshaped taillights and a beefier diffuser.

Downforce and aerodynamics have been given full focus in the rest of the new styling. The front bumper features enlarged front-side air intakes and new canard ‘fins’ on the lower front bumper are designed to more accurately harness air. Control of flow is then directed by fin-shaped side rocker moldings – derived from the RC F GT3 race car – to new rear air breathers.

Things are a little different on the inside. In sharp contrast to the savage exterior, the RC F’s cabin is actually a very warm and welcoming place to be. Appropriately, the sport seats are the best part of the interior. Lexus has always make great seats and the ones in the RC F are probably some of their best. Contoured perfectly to an average-sized adult body, they are exceptionally comfortable and supportive, not to mention looking absolutely superb. They are also heated and ventilated.

The dashboard is starting to age a little though 2019 brought about a few updates, namely the new style air vents and a 10.3-inch widescreen centre display. The latter, however, still operates though Lexus’ fiddly touch pad interface, and Apple CarPlay and Android Auto are still lacking. 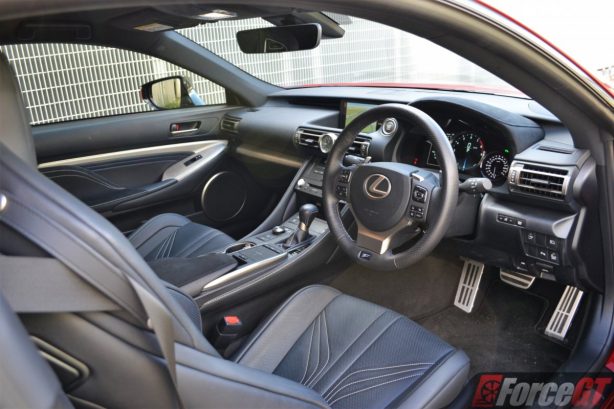 But the bits that matter to driving are all still pretty good. Unchanged from before, the digital instrumentation changes hues depending on the driving mode selected and is as cool as ever. Unlike the M4’s the steering wheel isn’t too thick and falls nicely to hand. All round visibility isn’t an issue, too, though a slightly lower driving position would be ideal. And Lexus, it’s seriously time to ditch that foot-operated parking brake for an electric one.

Typical of Lexus, cabin materials are of a very high standard, with the leather and Alcantara trim feeling remarkably soft and expensive. Fit and finish is also flawless and attention to detail is second to none.

Complete with a 17-speaker Mark Levinson premium audio, the luxurious cabin sits four, but the rear pews are really meant for just kids, as it’s a tight squeeze for any adult back there.

While the atmospheric 5.0-litre V8 could certainly do with a power upgrade, no matter how big or small, it still produces a potent 351kW of power at 7100rpm, accompanied with 530Nm of torque between 4800rpm and 5600rpm.

One of the smoothest V8s we have sampled, the engine has been tweaked in a few areas, including a 7.0 per cent-lighter machined intake manifold and redesigned intake piping for sharper throttle response. A new, more solid rear engine mount has also been developed to further tighten handling at the cornering limit. 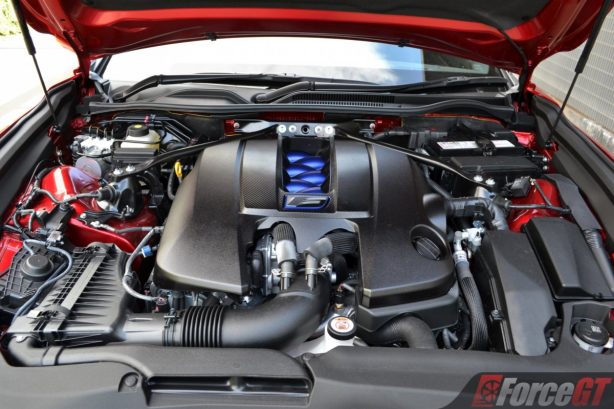 For the first time since the LFA supercar, launch control is standard across the RC F range to enable the fastest standing-start acceleration.

There are updates to the sports car’s underpinnings, too, with composition of the front suspension upper support mounts and rear toe control arm bracket changed from steel to aluminium. Elsewhere, hollow rear-axle shafts replace solid shafts. In both cases, weight reduction and enhanced rigidity is achieved.

The strength of the steering rack bushing has also been increased by 150 per cent to boost steering response and enhance front-wheel toe control, joining new Michelin Pilot Sport 4S tyres to increase agility and driver feedback.

All in all, the changes have resulted in a reduced kerb weight of 15kg for the RC F, bringing the weight down from the previous 1860kg to 1845kg. It’s still hefty but any improvement is welcomed.

The Track Edition benefits from further weight reduction through the use of even more lightweight materials, which help shed a further 50kg to deliver a total reduction of 65kg. Tipping the scale at 1715kg, the Track Edition is lighter than both the Audi RS5 Coupe and Mercedes-AMG C63 S Coupe. 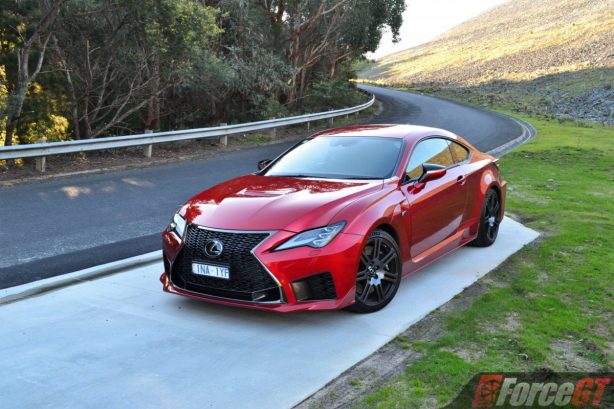 Driven normally, the RC F possesses all the hallmarks of a Lexus. It’s serene, refined and very civilised. The ride across all but the harshest bitumen is also surprisingly compliant for a sports car, yet it still manages to leave just enough road feel through the steering and seat for you to know what’s going on underneath. This is an everyday sports car, no doubt.

But the RC F is all about arousing the senses and on that it delivers in spades. Uncork the V8 past 4000rpm in the most extreme Sport+ mode and you’ll be treated with one of the best engine soundtracks this side of a V8 Supercar. Press on toward its 7100rpm cutoff is akin to stepping into automotive nirvana. This thing just sounds bloody brilliant! There is, after all, justification in Lexus’ decision to stick with naturally aspirated over turbocharging induction.

And it’s not just a case of all noise and no go, as the RC F is properly quick, sprinting from 0 to 100km/h in just 4.5 seconds. The lighter Track Edition is two-tenths quicker at 4.3, making it the fastest Lexus offered since the LFA. Yes, both models are still a tad slower to crack 100km/h than its German rivals but the visceral roar of that V8 makes it feel faster than it actually is. 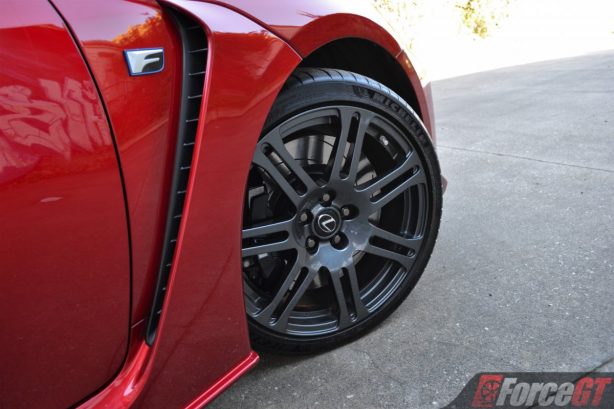 When it comes to cornering, the RC F doesn’t disappoint either, with it staying confidently flat and glued to the road. There’s excellent grip to keep things tidy, if you so desired, yet it’s always keen to let its tail hang loose under a slab of throttle with the electronic watchdogs turned off.

It’s only at a tight corner that the RC F shows signs of struggle, as it still feels like it’s dragging on too much weight despite the 15kg weight loss, with the front feeling not quite as locked down as we’d hoped.

With the new update, Lexus has ditched the Torque Vectoring Differential (TVD) in which two electric motors, one on each side of the rear axle, controls torque distribution to each rear wheel. Instead, the new RC F now has a more conventional and lighter torsen mechanical limited-slip differential, which is just fine but we miss the TVD’s quicker reaction during turn-in.

Still, the RC F is a lot of fun. It’s such an easy car to drive, too. The chassis moves around and you can feel its weight transfer and where the grip is. The steering is precise with good feedback for an electric steer, and the brakes are strong and resistive to fade. A little more power and greater reduction in weight would really enhance the way it drives. 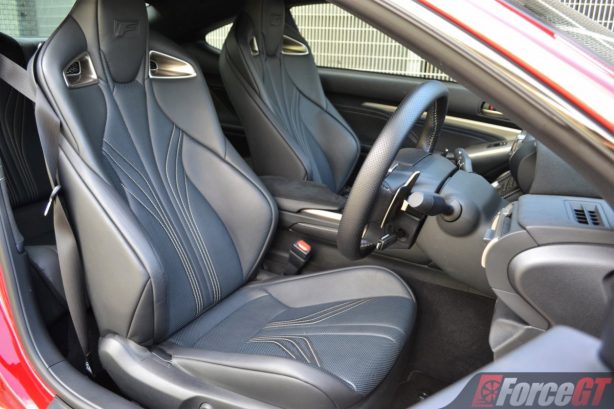 Unsurprisingly, the RC F’s average fuel consumption is rated at a thirsty 11.2L/100km against our on test average of 12.2L/100km.

Being a Lexus, the RC F benefits from its maker’s four-year/100,000km warranty and four-year free roadside assist which are class-leading among luxury marques. Unfortunately, there’s no official capped-price servicing plan to back that peace-of-mind up further, but for the record, it only requires servicing every 12 months or 15,000km. While Lexus has not announced the average cost of service, expect to pay around $800 each time you visit the dealer, if Lexus’ identically engined LC coupe is of any indication.

Renown for its excellent customer service, Lexus guarantees you a loan car every time your vehicle is in the shop, and will even come to your house or workplace to collect (and drop-off) your car when it’s time for maintenance – something you don’t get from the European brands.

The Lexus RC F’s incremental and cumulative updates have made it better to drive than ever before, made more exciting by the fact that it’s one of the last breeds of normally aspirated V8 sports cars still on sale today.