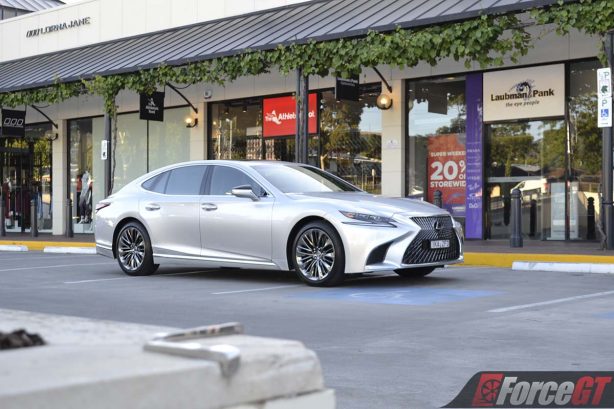 It’s fair to say when you’re at the pinnacle of your game, you are expected to be excellent in almost every area and the Lexus LS is the embodiment of such excellence.

From the very first LS sedan 30 years ago, the model has been the standard-bearer for cabin refinement, attention to detail and craftsmanship.

So what better way to find out what being pampered means than in the range-topping Sport Luxury. Besides, according to Lexus’ own estimate, 70 per cent of buyers will opt for the flagship variant over the slightly cheaper and sportier F Sport. 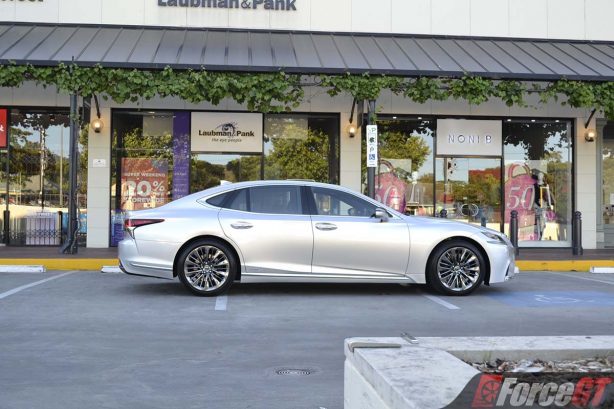 We have already found the LS 500h to be superbly comfortable around town and decently rewarding around the bends in our previous review, which you can read here.

Of course, to get to the level of opulence as in our tester, you’ll need to fork out another $9,880 for one of the eight hand-crafted interior ornamentation options – which seems entirely reasonable given the huge step up in cabin ambience and exclusivity. 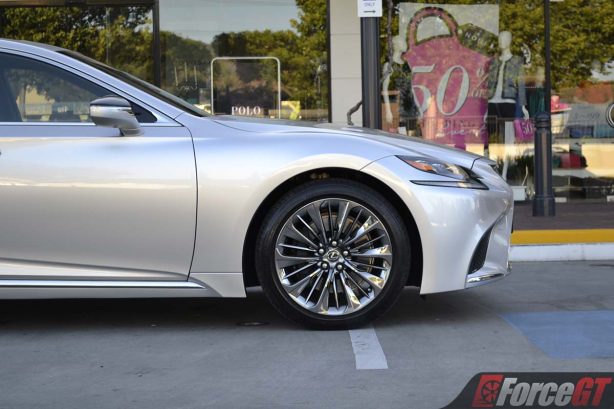 The Lexus LS makes you feel special the moment you unlock the doors.

The ‘welcome sequence’ includes an access function that raises the low-slung sedan’s air suspension by 40mm for easier entry, followed by cabin illumination inspired by the soft glow of traditional Japanese Ando lanterns.

Once seated, the car diligently raises the seatbelt buckles by 50mm to avoid occupants fumbling for them.

The driver’s outer cushion bolster opens out when the car is unlocked and then automatically returns to the normal supportive position when the driver is seated.

When leaving the car, the reverse sequence happens, while the driver’s seat automatically rises and moves rearwards to make it easier to exit the vehicle. 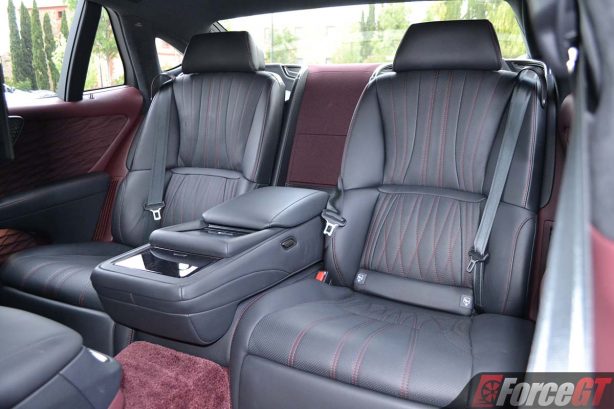 Stepping into the cabin is like entering a couture fashion house on the Via Monte Napoleone in Milan.

There is a choice of four interior colour schemes in the Sports Luxury, including the superb Crimson Fire and Chestnut trim of our test car. It is matched with super luxurious L-aniline leather upholstery that Lexus claims is made using only the top one per cent of carefully selected North American hides. They are then tanned by a special process to make them 30 per cent softer than semi-aniline leather. 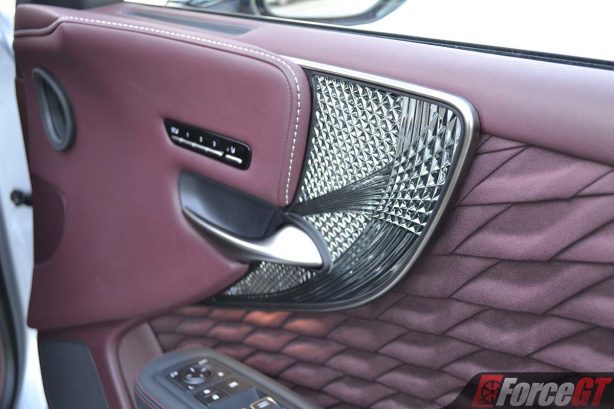 That’s not all. Sitting above each hand-folded pleat, as well as in the display zone in front of the passenger seat, is a striking Kiriko cut-glass ornamentation that wouldn’t look out of place in an art gallery.

Traditionally, the Kiriko patterns are created using a technique that involves hand-cutting clear colours and delicate lines in a piece of glass, which are then repeatedly polished to a soft glow. 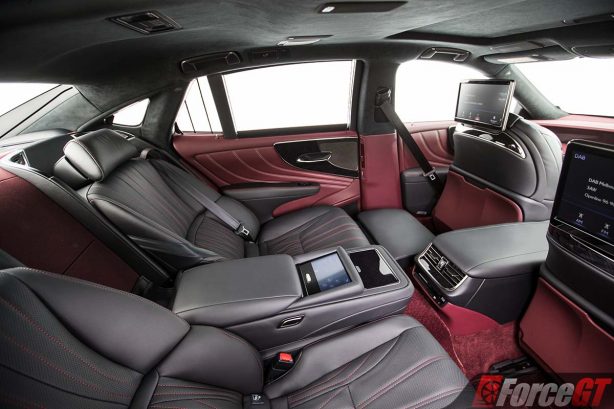 While the front seats are super comfortable thanks to 28-way power adjustment as well as massage function (more below), it’s the rear seats where you’ll want to spend most of your time in.

Besides best-in-class 22-way adjustment, including back, hip and pelvis support, as well as ottoman extension, the rear seats recline to a class-leading 48 degrees.

Best of all, all function –including audio, climate, interior lighting and the electric sunshades (rear doors and windows) – are controlled via a multi-function touch screen in the rear centre armrest.

The seat thoughtfully returns to its default upright position automatically when the car stops and the rear door is opened, allowing for an easy and comfortable exit.

Being in the Lexus LS is like having your personal masseur with you at all times.

That’s because the LS design team consulted the Japanese massage experts to design the Shiatsu Massage functions in both the front and rear seats of the new LS, to ensure the correct degree of thumb-like pressure is applied in the right places to help occupant relax.

There are five separate massage courses for the front seats that work with a centripetal or centrifugal action, or focusing on the lumber, upper and lower-back regions.

At the back, a world-first spot heaters have target heat stimulation on the shoulders and lower back in conjunction with the Shiatsu massage. They are designed to warm specific areas without warming a person’s entire body. 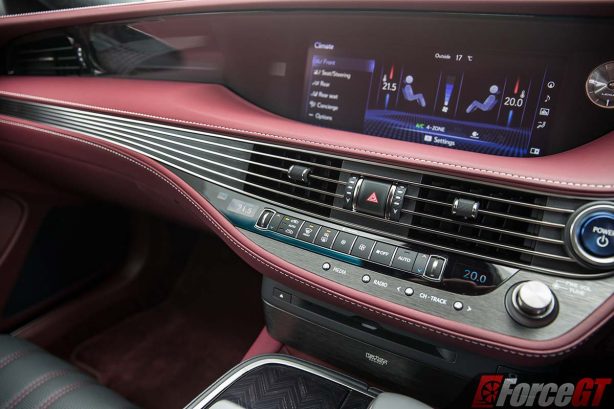 In addition to the four-zone climate control system, in the Lexus LS, you get your own climate concierge that uses an infrared matrix sensor to monitor the body temperature of all the occupants.

The system monitors 16 zones with allowance for factors such as low-level sunlight through the windows.

As well as the air conditioning, Climate Concierge also controls seat heating and ventilation and the heated steering wheel to maintain a comfortable environment for each person on board. 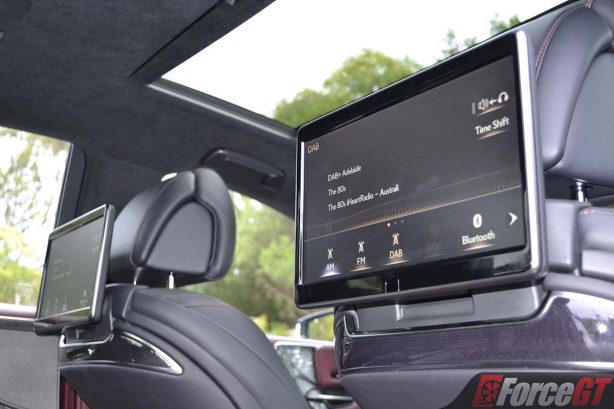 Being in the LS is like sitting in the centre of a music hall, with 23 speakers positioned in 16 locations around the cabin powered by a 16-channel Mark Levinson QLI (quantum logic immersion) Reference Surround Sound amplifier.

The system will please some of the most demanding audiophiles with natural, all-enveloping sounds.

Even the alloys have built-in noise reduction properties, each having a hollow rim section with a resonator hole to help reduce air resonance generated by the tyres.

While drivers are treated to the most dynamic LS Lexus has ever produced, it’s the back seats that you’ll want to spend your time in.

As for the Kiriko Ornamentation option, it makes the interior a whole lot more special.