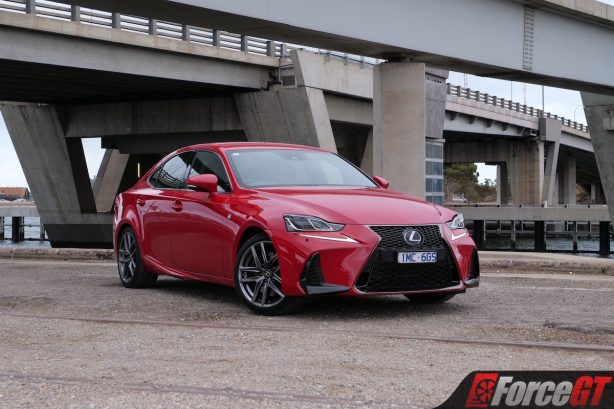 If you’re in the market for a compact sports sedan these days, chances are you’ll be looking at something with a 2.0-litre turbocharged four-cylinder engine. Now I’m not going to go and criticise you for that decision as it’s one that makes sense – after all, engines of such a size are prevalent in these sorts of cars, and perform nearly as well and use less fuel than larger six-cylinder engines – but if you’re looking for something full-fat, rather than a lactose-free four-pot, you’ll want to act fast.

The new BMW 3 Series has launched here with a range of four-pot engines exclusively, Jaguar has cut down its XE range to just one engine – sadly eliminating the supercharged V6-powered S model – and the Mercedes-Benz C-Class doesn’t offer anything larger than a four-cylinder until you reach AMG territory, meaning you now only have a couple of options for a proper six-pot, rear-wheel drive compact sports sedan at a somewhat reasonable price. One of those is the slow-selling Infiniti Q50, and the other is this – the Lexus IS 350 F Sport.

Right off the bat, our sporty-as-they-come F Sport tester finished in racy Madder Red paint stands out as being one good-looking machine, with it cutting an aggressive profile thanks to those swooping side skirts and wide hips – and that’s not to mention it’s aggressive snout. Having been around since 2013 with only minor styling tweaks and adjustments since then, the design of the IS is one that’s aged well, too. 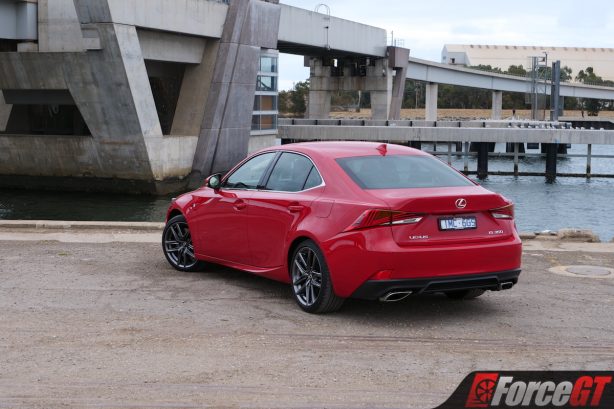 The interior is suitably matched, with two-tone red and black leather upholstery, very comfortable and supportive bucket seats, and a driver focused layout that places all controls easily to hand.

The movable LFA-inspired digital gauge cluster only adds to its sporting charm, and the quality and clarity of it and the 10.3-inch central infotainment screen should definitely be noted.

Not quite so great is the well-documented Remote Touch Controller that’s used to manipulate the infotainment system, which never really seems to do what you want it to. While Apple CarPlay and Android Auto connectivity are now available in certain Lexus models, the IS is unfortunately not one of them. You can, however, get it retrofitted to the IS through aftermarket – one such vendor is CarsGadget.

Elsewhere, the foot-operated parking brake is not only irritating to operate, but it cheapens the feel of the interior too. However, the sliders used for the climate controls were something I was similarly sceptical about, although they did prove to be far more compliant and easy to use than the infotainment joystick. 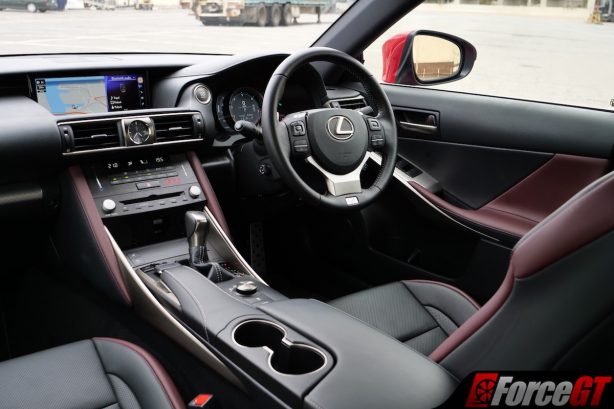 While the rear seat is a tad cramped, as it is in most sedans of this size, I did find I had a better time fitting back there than in some rivals. The front seats, however, were the perfect size for my 6’2″ frame, and how it feels in the driver’s seat is obviously the most important thing regarding the interior of a car like this.

Key above all, however, is the performance, which I’m sure is what you’re all here for, and thankfully, the IS 350 has a drivetrain that will live up to nearly all of the expectations you have of it.

As the badge on the back implies, a 3.5-litre naturally aspirated quad-cam V6 lies beneath the bonnet, which churns out a strong 232kW and 380Nm. Connected to an eight-speed automatic transmission and rear-wheel drive, these are clearly the right ingredients with which to cook up a proper sports sedan. 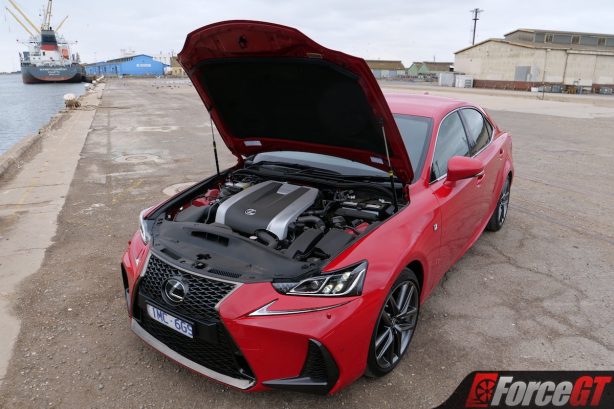 That big V6 sings a soulful tune as you wind it up to its 6,600rpm redline and watch the needle turn red, and while it’s not as raucous as, say, the exhaust note of the LC 500, it’s certainly not a bad noise.

The performance is certainly strong, too, with being dispatched from 0-100km/h in a brisk 5.9 seconds. But straight line performance is easy to get right – simply add more power, and you’re there – but making an engine work well on a backroad is another thing entirely, and it’s something Lexus’ engineers have got right by staying clear of turbocharging it.

With this engine being naturally aspirated unlike those in all its rivals, including the Q50 as even its 3.0-litre V6 sports a pair of turbos, it has very crisp throttle response that simply can’t be matched by even the most dialled-in of modern turbocharged engines, but there is a catch – you’ll need to be in the right gear to make the most of what it has to offer, which is sometimes a challenge. 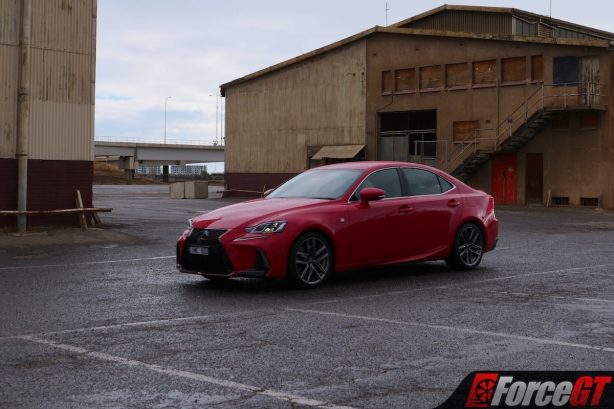 It’s not because the transmission is in any way unpredictable, because it isn’t – it does what you want it to very nearly all the time when left to its own devices, and when using the steering wheel-mounted paddles, the upshifts are quick and predictable, although it can sometimes stumble over downshifts if you catch it off guard. The reason, ultimately, is because the gearing of its eight ratios is far too tall.

Considering the fact the big V6 has a very limited power band – peak power doesn’t come on until 6,400rpm, and peak torque isn’t reached until 4,800rpm – it really could do with shorter, snappier gearing. Instead, the tall gears feel slightly more oriented towards open-road driving than backroad blasting. Use the paddles and you can extract most of what it’s got to give, but you’ll have to keep thinking about what gear to be in and when to change more than you’d like to.

But its the IS 350’s chassis – particularly in F Sport guise as we have on test here – that impresses most. Despite the big engine up front, the slightly out-of-whack weight distribution is something you simply never notice. Unlike in something like the departed Jaguar XE S – which, for as well set-up as it was, did feel rather nose-heavy – the IS 350 feels as balanced as if there was a smaller four-pot under the bonnet. 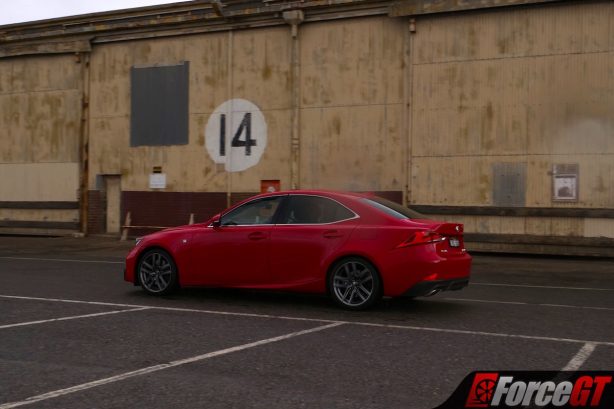 Although the steering can feel a tad light and over-assisted in its Comfort setting, throw it into Sport S+ and it feels tight and direct, pairing well to the adjustable tune of the suspension, which is not too firm and not too soft, but – like Goldilocks’ porridge – is just right.

Despite the mid-corner bumps and off-camber corners you’ll find littered around the Adelaide Hills where we were pushing the IS, it never seemed to get unstuck by any of it, remaining flat and composed no matter what you threw at it. And that excellent chassis control lends itself well to when you want to have some fun and exploit this car’s rear-wheel drive underpinnings.

Turn in, plant your foot down in the right gear, and give it a dab of opposite lock, and you’ll be sliding about like it’s nobody’s business. Sports sedans like this are some of the easiest cars in which to provoke and control oversteer, and the IS 350 might well be the easiest of the lot – partly, its because of the chassis, but the predictable throttle response of a naturally aspirated engine lends a big helping hand, too. 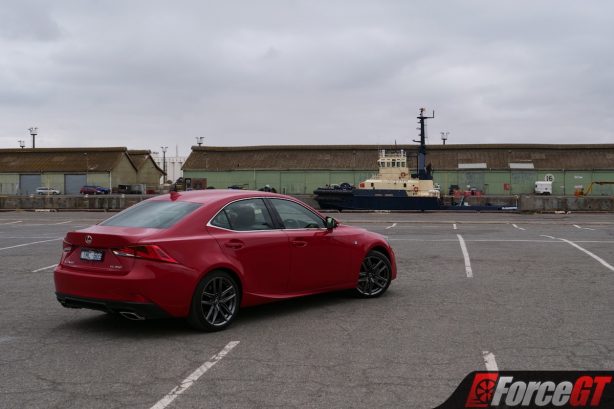 The other thing worth noting about this engine is that it should be dead reliable, too. Part of the 2GR family of engines, these V6s have been in production in various states of tune and fitted to various Toyota and Lexus models since all the way back in 2005 – this particular version, the 2GR-FKS, has been around since 2015 – and the fact it’s stood the test of time and is still in production and heavy use today is a testament to it.

Being a Lexus, the IS 350 benefits from its maker’s four-year/100,000km warranty which is class-leading among luxury marques. Unfortunately, there’s no official capped-price servicing plan to back that peace-of-mind up further, but for the record, it only requires servicing every 12 months or 15,000km, with an average cost of $606.64 each time you visit the dealer.

While there may be better ownership plans out there from mainstream manufacturers, I’d argue this may be one of the best entry-level luxury buys out there from a financial standpoint – especially as even though its hefty $76,880 price tag is an intimidating number, you’ll be spending a lot more with the Europeans for this level of performance. 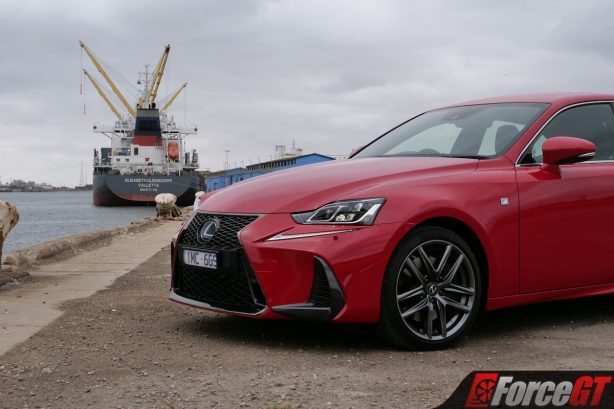 It might be getting on in years, but the way the IS 350 drives belies its age. Combining all the charm of an buff, old-school naturally aspirated engine with truly impressive driving dynamics – whether you’re going for precision or pure fun – this Lexus will be a real winner for the drivers out there.

And being a Lexus with a proven power plant under the bonnet and a strong warranty compared to its rivals, it should be easy on your hip pocket in the long-term when it comes to maintenance and repairs.

But above all, the IS 350 stands out for its ability to put a smile on your face. Its ability to kick the tail out and the noise that big free-breathing V6 makes reminds you of what we’ll soon be missing out on as the era of downsizing and turbocharging reaches its peak. If you’re temped, you ought to act quick and get one now before its too late.