When Lexus dropped the first photos of the new ES, I knew Lexus was onto something with the seventh-generation of the its most conservative model. For a nameplate known more for its spaciousness, comfort and luxury, the new ES actually has style this time around, and a good dose of it, too. Where the previous model would blend in completely with traffic to the point of being near invisible, this new one stands out and catches the eye. Thank its big brother the LS for that because the new ES looks just like a shrunk version of Lexus’ bold flagship sedan.

Unlike the $200k LS though, the ES is still fairly accessible for the average luxury buyer, with the mid-size sedan now a hybrid-only offering in Australia priced from $59,888 for the ES 300h Luxury tested here and $74,888 for the high-spec Sports Luxury. Available in certain oversea markets, the F Sport trim is not offered here and Lexus’ justification for it is that buyers looking for a sportier flavour can buy the IS or GS F Sport instead. Fair call. 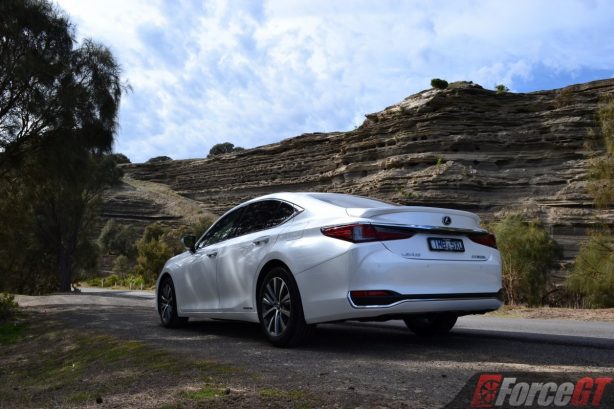 You might ask where exactly does the ES sit in Lexus’ pecking order and what are its competitors? Well, within the family the front-drive ES slots in between the rear-drive IS and GS, but out there the ES does not really have any direct competitor, though size wise it’s similar to the likes of Audi A6 and BMW 5 Series – both cars play at a higher price bracket. So, the ES is quite a unique proposition in that it offers the space of a mid-size sedan for the price of a compact executive. Perhaps, it’s closest rival is one that is from the more mainstream end of the market, the Volkswagen Arteon.

Regardless, the new Lexus ES is a big step up from before. As previously mentioned, the new styling is a big win, with it looking sharp and bold from pretty much all angles. While the design does have some odd elements such as the split shoulder lines from around the rear door handle forward and the ‘shifted’ daytime running lights, everything seems to tie together pretty well and the result is a sleek, classy and elegant fastback look contrasted by that bold spindle grille that has now become a Lexus design hallmark. 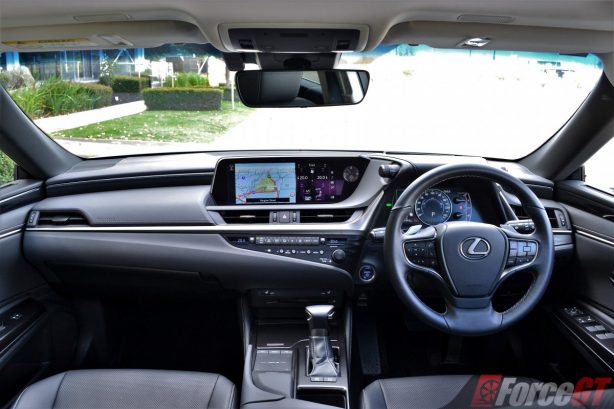 If the exterior is a vast improvement, then the interior is a major leap forward. Finally, an ES cabin that looks like it belongs to the current times. The horizontally layered dashboard gives a sense a space, yet the LFA-esque instrumentation binacle – with the two stalks protruding out from both sides – and thick rimmed steering wheel offer the driver a connected feel. Look around and you’ll see that it even has contemporary styling around the centre console and door cards. Great effort, Lexus.

The choice of materials is top notch, with upper surface areas soft to the the touch and the leather upholstery feeling equally soft and fine. Even the plastics feel premium and have a nice texture to them. But the highlight of the interior is none other than that massive centrally-mounted 12.3-inch infotainment screen, which is one of the biggest in class and comes standard across the range. The high-res screen delivers ultra crisp graphics, which together with the equally vivid digital instrumentation LCD screen, endow the cabin with a suitably high-tech feel.

It’s just a shame that the centre screen operates through Lexus’ tedious remote touch interface, which is essentially a touch pad to control an on-screen cursor. While it’s perfectly fine to use when stationary, it’s tricky to operate on the move compared to rival rotary knob-based systems, often selecting the wrong on-screen button when you make a selection by pressing down on the touch pad. 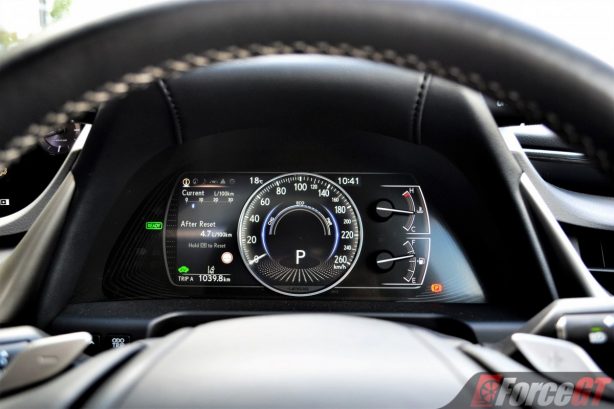 Other than that, there’s very little to complain about the new ES cabin. The seats are superbly comfortable, and I mean it. They are just sublime and feel as though they have been custom made to contour perfectly to your body. Really, no car in this class can match the ES in seat comfort.

And of course, there’s the space inside. The ES has one of the biggest cabin of any mid-size sedan and the rear legroom is enormous. The space in the back is almost as vast as that in the LS, a car two categories up. You can really stretch out in the back, even without moving the front seats forward. No surprise as in the ES’ second largest market, China, most owners are chauffeured around in the back, so you can see the design intention there. 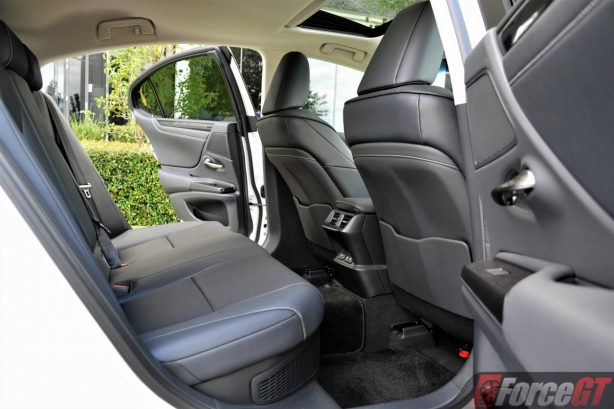 What’s surprising – and disappointing – is the inability to fold the back seats (due to the presence of a V-brace for added rigidity), though there’s a small removable hatch behind the drop-down centre armrest in case you do need to carry lengthy items in the boot. Speaking of which, the boot measures a respectable 454 litres, larger than the 410-litre cargo capacity of the BMW 530e.

While the door pockets are on the small side and their design is such that a standard water bottle needs to be placed horizontally which takes up the entire space, storage elsewhere is pretty decent, with a usable glove box along with two deep cup holders up front and another two in the back behind the arm rest. But our favourite is the centre console bin, which is not only big but has a lid that can flip open both ways – towards the driver and also to the front passenger. It’s an ingenious design. 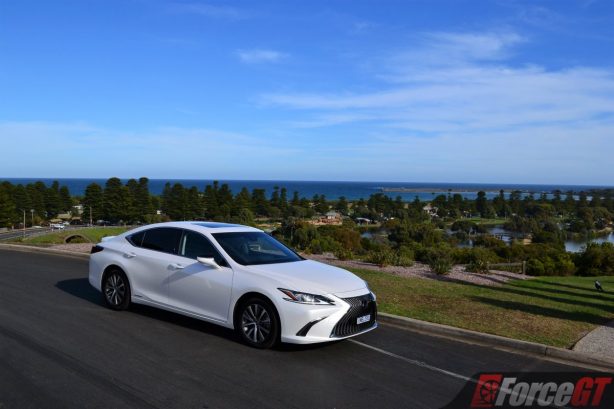 Typical of Lexus, the ES is equipped to the brim, even in base-spec Luxury trim. Standard equipment in our ES Luxury include head-up display, 12.3-inch multimedia screen, wireless phone charger and road speed limit sign recognition (which works nearly every time).

Heated front seats in the ES Luxury offer 10-way power adjustment. In Sports Luxury, they are also ventilated with 14-way adjustment for the driver’s seat and 12-way for the passenger seat.

On the safety front, the Luxury is equipped with Lexus’ Pre-Collision Safety System with Pedestrian Detection, Lane Departure Warning with Steering Assist, Automatic High Beam and all-speed Active Cruise Control. All pretty standard fare these days but I question the lack of Blind-Spot Monitor and Rear Cross-Traffic Alert in the base Luxury trim, the former is an absolute necessity given how much blind spot the ES’ thick B pillar creates. To get those features you will have to step up to the Sports Luxury trim, which also adds adaptive headlights. 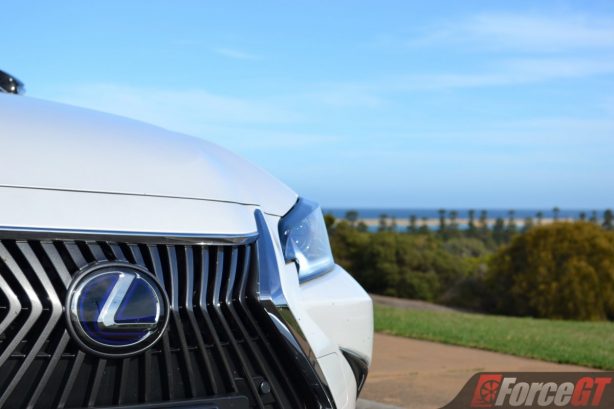 The ES’s hybrid system is all-new according to Lexus and combines an Atkinson cycle 2.5-litre four-cylinder direct-injection petrol engine with lighter, smaller and more efficient battery pack and electric motor. With the engine rated at 131kW and the electric motor producing 88kW, the system outputs a combined total of 160kW of power and 221Nm of torque. Normal, Eco and Sport driving modes can be engaged even in electric-only (EV) operation.

The hybrid drivetrain offers plenty of go from the get go thanks to the strong torque from the electric motor the moment you floor the right pedal, delivering relatively lively electrically propelled acceleration. As you press on the petrol engine kicks in to supply more power.

The self-charging system replenishes the battery every time the car coasts or brakes, which brings an artificial brake feel typical of hybrids, but the pedal is still nicely progressive until just before the end of the travel at which point it turns unpleasantly wooden.

While its zero to 100km/h acceleration time of of 8.9 seconds is nothing to shout about, the ES has more than enough pull for everything the daily grind throws at it. Throttle response is good thanks to the instant 202Nm of torque from the electric motor and an engine that kicks in swiftly when called for. The linear power build up also makes for fairly effortless overtaking. 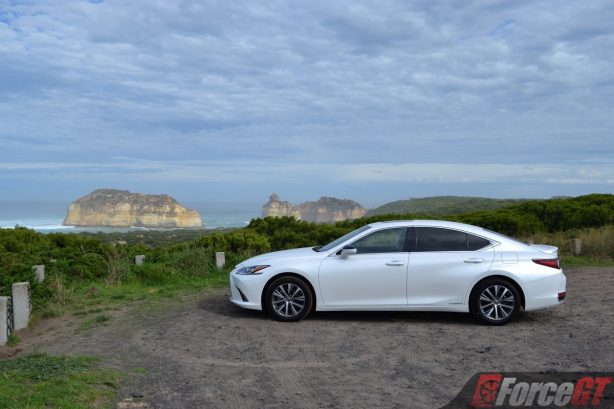 But the most impressive is just how refined, smooth and quiet the drivetrain is. The transition from electric only to petrol-electric is almost imperceptible, and while the CVT automatic the engine is hooked up to isn’t anywhere near sporty to drive, it’s entirely suited to the fuel-saving nature of the hybrid ES, operating smoothly and discretely in the background without ever bringing attention to itself.

With the whole powertrain being so fluidy and hushed, you won’t care if it’s got a CVT or conventional torque converter because it drives almost like a full electric car, except of course when you’re hammering it.

And on the topic of sporty driving, the ES isn’t what you’d expect from a hybrid. It actually handles reasonably well with good body control and crisp turn-in. The steering is direct, if not a little numb on feedback, and the tyres offer excellent grip. The location of the battery pack in the rear underneath the rear seats also helps to balance weight distribution and contributes to a fairly neutral handling feel.

But driving dynamics aren’t what the ES is about, rather it’s about comfort and luxurious motoring. And in that brief, the ES is simply unrivaled. It’s the quietest, most comfortable and plushest mid-size luxury sedan you can get for the money. Ride quality is outstanding, even on our crumbling roads, and the cabin is always serene and tranquil. The ES is both a delightful daily and a supreme long distance cruiser.

And the best part is at the end of our week-long test covering over 1,000km of mixed driving the ES’ average fuel consumption came in at just 4.8L/100km, only 0.2L more than its rated figure. Try beating that in a diesel.

For a car primarily built for cocooning its occupants in great comfort and luxury while they are being transported to their destination, the new Lexus ES fits the brief perfectly, just like many of its predecessors.

What this new one has that we have not seen in previous generations though is a good dose of style and new found level of dynamics. Match that with exceptional real-world fuel efficiency and generous features, the ES does present itself as a pretty attractive option if sportier driving feel afforded by similarly priced but smaller rear-wheel drive rivals isn’t a top priority.