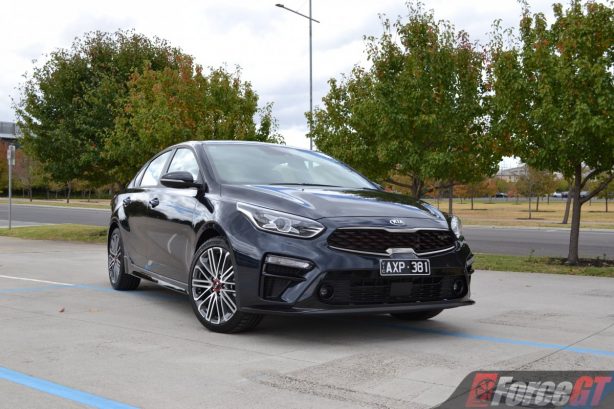 Want a small car with a little more excitement but not ready for the full performance package just yet? Here’s one – the Kia Cerato GT. Topping off the Cerato range, Kia’s best-selling model, the GT comes with a zesty turbo engine matched by tweaked ride and handling for a more focused drive than the range’s more vanilla variants.

But it isn’t a WRX or Focus RS rival. Nor does it cost that much. This is a warmed-up Cerato that is supposed to bring some elements of those high performance cars, yet easy enough to live with on a daily basis.

Does it meet its brief then? Let’s find out. 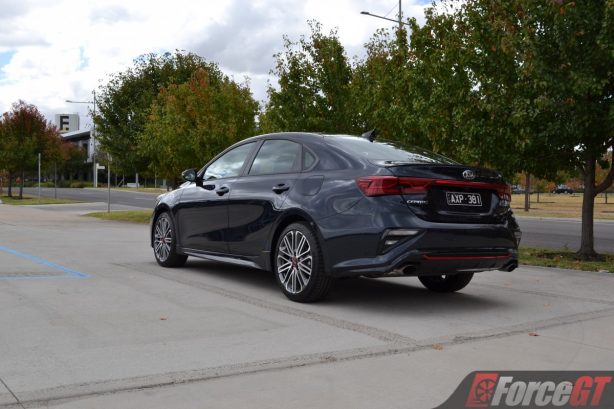 First up is the price. And we have good news. With a special drive-away price of just $31,990 (at the time of writing) for both the sedan and hatch, the Cerato GT represents excellent value. Factor in Kia’s factory standard seven-year warranty, the sportiest Cerato yet is unquestionably one of the segment biggest bargains. And that’s before we look at its ridiculously long list of standard equipment, which brings us nicely into this topic. 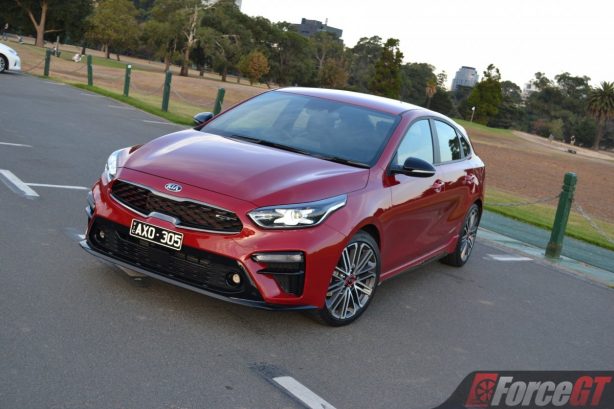 And that’s not all as the GT badge also brings a spiced up exterior and interior, with the outside decked out with a distinctive body kit with subtle red accent on the grille and rear diffuser, boot lid spoiler, dual exhausts and 18-inch alloy wheels when red wheel nuts, and the inside fitted with paddle shifters, alloy sports pedals, a pair of supportive sport front seats and a flat-bottomed leather steering wheel.

LED lighting is standard for the headlights and tail lamps, so are the air-con vents for the rear passengers. The only two things missing, really, are auto wipers (a shame) and sunroof, the latter many buyers would be happy to do without.

Put simply, this Kia is literally loaded with kit. 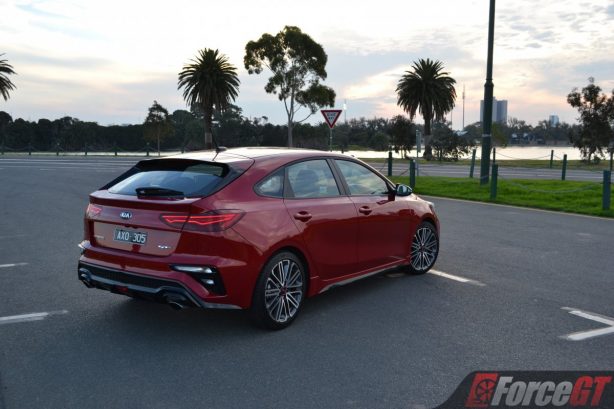 But the biggest news is what’s under the bonnet. As the sole turbo offering in the Cerato range, the GT gets a 1.6-litre turbo petrol engine that produces 150kW at 6000rpm and 265Nm of torque from 1500-4500rpm, with all that channeled to the front wheels through a 7-speed dual-clutch transmission gearbox.

While it’s nowhere near the figures of a true performance engine, the turbo four makes good power for its capacity and is miles better than the aging and less powerful normally aspirated 2.0L unit found in the lesser models. Turbo lag is minimal and there’s good grunt in the mid-range, with the GT capable of punchy acceleration and swift overtaking maneuvers.

Where the Hyundai-sourced engine lacks is refinement at the top end. Rev it out and it’s coarseness is immediately apparent, as the strained engine noise transmits all the way into the cabin. Despite its power and versatility, wringing this engine out is certainly not the most fun thing to do.

The dual-clutch auto fares much better though. While not as quick as VW’s DSG, the kia unit shifts smoother and much better calibrated for congested urban stop/start traffic. Left to its own devices, it’s always in the right gear to extract the best from the torquey turbo engine. Shifting in manual however, it’s slow to respond to the steering wheel paddles, which doesn’t help with sporty driving. 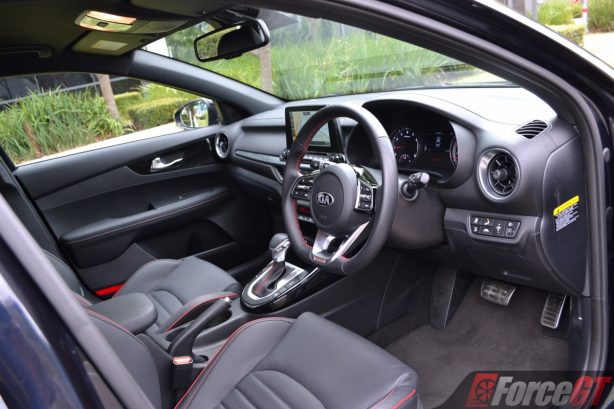 What does though are the sports suspension. Packing firmer springs, dampers and anti roll bars than the regular models, the Cerato GT hatch would give hot hatches a run for their money while its sedan sibling is an absolute sports sedan as far as handling is concerned. Their flat cornering stance and excellent composure and nimbleness allow you to charge through bends with great confidence, while knowing that those grippy Michelin Pilot Sport 4 tyres will always have your back.

With tight handling comes a sacrifice in ride comfort and the Cerato GT is firm. Very firm. In fact, we find it firmer than sportier cars like the WRX or Golf GTi, which is just unnecessary for a less focused car with some sporting intentions. For a car designed to be driven daily, quite likely half the time by the wife or girlfriend, it lets in too much of the road into the cabin and can be borderline uncomfortable over broken surfaces. 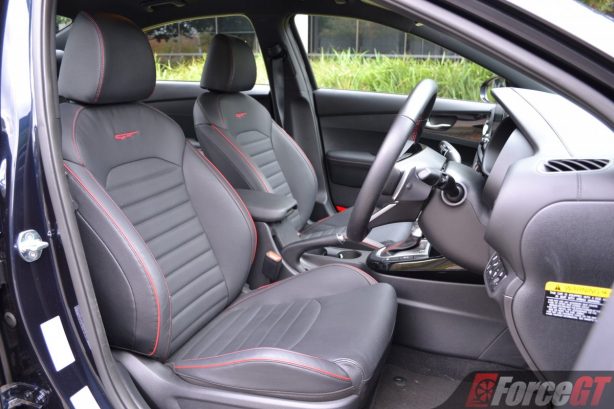 On the flip side, it’s a quiet cruiser on smooth open roads with little tyre and wind noise. It’s also supposed to be more efficient than the regular models, with the brochure claiming an average fuel economy of 6.8L/100km against the 2.0L models’ 7.4L/100km figure. On test though, the trip computer on our Cerato GT hatch and sedan returned 7.6L/100km and 7.4L/100km respectively, which are still some respectable figures for a warmed hatch or sedan.

As with Kia’s latest slew of products, the rest of the car is very well presented, with excellent fit and finish throughout the cabin. The quality of the interior materials is of a decent standard and the European-styled dashboard has good ergonomics. Red stitching on the leather upholstery and steering wheel further add a touch of sportiness and contrast to the all-black interior.

Credit also goes to the Cerato’s roominess, especially the rear legroom which is fairly decent for a car of this class. The vast glasshouse also lets in plenty of light to the cabin.

The boot is of a generous size, too, with the hatch offering 428 litres and the sedan significantly larger at 502 litres. Drop the 60/40 split folding rear seats and the space expands further. Both cars are equipped with handy hands-free boot release which in Kia’s adaptation of the technology requires the key fob to be near the boot for 3 seconds to activate the release. Not a bad design but during test sadly the feature failed to work in our Cerato GT hatch, not only failing to auto release but locking even the manual release. 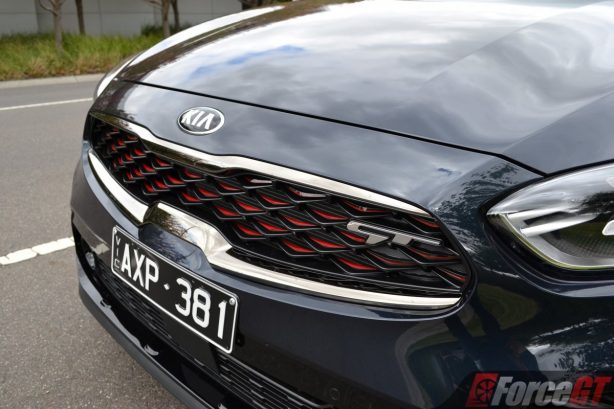 The Kia Cerato GT is without question one of the most value-for-money sporty small cars on sale today. Both the hatch and sedan versions pack tremendous standard equipment topped with a punchy turbo engine, all packaged up with faultless dynamics for a very tasty sub-$32k drive-away price. You just have to live with the unexpectedly firm ride and lack of top-end refinement.