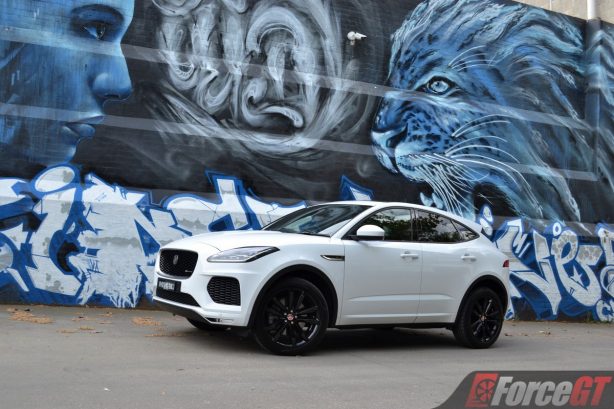 Ten years ago, you would think I was kidding if I told you a Jaguar could be had for under fifty grand. You would think I was crazy if I told you a Jaguar was about the size of a Suzuki Vitara. But here it is and it’s called the E-Pace. This cute cub is the smallest and most affordable Jaguar on sale today. And it lands right in the hottest segment of the premium car world – compact crossover.

Why this segment? Because SUVs are big business these days. And what’s better at reeling in buyers stepping up from the mainstream into the luxury space and keeping their loyalty than a premium compact SUV?

The Germans have been doing that for a while now, with the establishment including the BMW X1, Audi Q3 and Mercedes-Benz GLA. Late but not sorry, can the British entry spoil the party? We explore the good and the not so good of Jaguar’s latest SUV in the range-topping P300 SE guise.

If you think the E-Pace look like a certain other Jaguar, you’re right. Jaguar couldn’t have found a better model in its line-up on which to base the E-Pace’s design on. The company’s flagship F-Type sports coupe is everywhere in the E-Pace’s styling, from the swept back headlights and short overhangs to the muscular proportions and powerful haunches. Small it may seem, but lacking in road presence it certainly isn’t. In the ForceGT’s office, it’s quickly earned itself as the prettiest car in the segment amongst the testers. 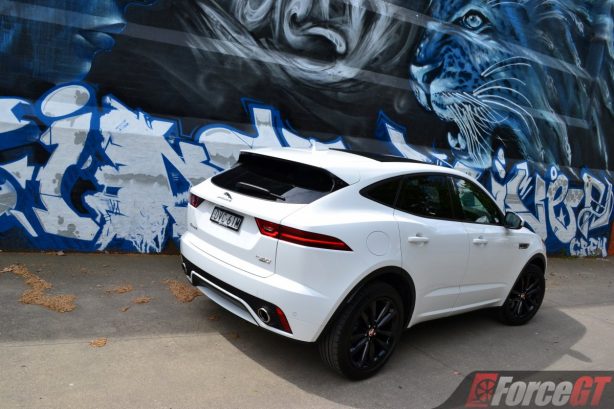 The E-Pace feels surprisingly roomy for its size. Head and legroom is aplenty up front, with the trait continuing to the rear, though loftier passengers might find their heads scrapping the headlining due to the E-Pace’s swooping roof line. Curiously, roof grab handles are conspicuously missing in all seat positions.

Designed for the urban trawlers, the E-Pace’s large glove box and even larger center storage will play well to owners’ gadget and accessory heavy lifestyles, so are those deep door pockets and the open stowage space at the bottom of the center console.

With a seat up capacity of 484 litres, the E-Pace’s boot only loses out to that of the BMW X1 (505 litres) but its opening is the widest in class which makes for easy loading. The cargo bay expands to a respectable 1,141-litres with the 60:40 split rear seats folded, though annoyingly, they can only be tumbled from inside the cabin as there are no release buttons in the boot.

The E-Pace’s interior inherits heavily from the F-Type, not just in design but also the quality of the materials. From the wraparound cockpit with built-in passenger grab handle, to the beautifully finished satin chrome detailing on the door handles, air vents and gear lever surrounds, the interior oozes craftsmanship and luxury.

The dashboard, center console and front and rear door cards are all covered in reassuringly soft rubber and/or high quality leather. Even some plastic trims – which are to be expected at this price point – feel solid and high quality.

It might be Jaguar’s entry-level model, but it feels far from it, and certainly more premium of a product than its German rivals. 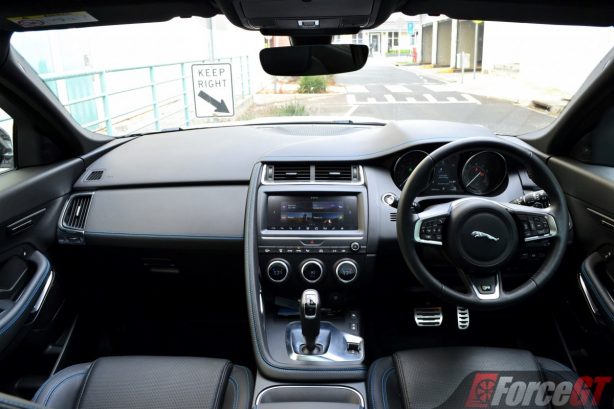 The 2.0-litre turbocharged four-cylinder engine in our range-topping P300 R-Dynamic is the highest output four-pot you can get from Jaguar. It generates a hot hatch shaming 221kW at 5,500rpm, backed by a strong 400Nm from 1,500rpm all the way to 4,500rpm.

It’s a cracking engine, with a superbly linear power delivery and great response, owing to the company’s decades of supercharging expertise. Whether it’s overtaking in country roads or ascending a slope, there’s always that effortless feel with which this thing gets up to speed.

Matched with a quick shifting 9-speed automatic transmission, the P300 is capable of blasting from 0 to 100km/h in just 6.4 seconds.

The R-Dynamic is the sportiest model in the range, so it didn’t come as a surprise that our E-Pace held itself superbly well around the bends despite the lack of adaptive suspension.

It’s hot hatch like pace, grip and body control stems from one of the best all-wheel drive systems around (courtesy of sister company Land Rover) capable of shifting virtually all the torque to the rear axle in split seconds if needed. The feel in Dynamic – the sportiest drive setting – even channels through, dare we say it, some of the F-Type’s playfulness.

The steering is appropriately weighted but not very fast (as expected for an SUV) and there’s torque vectoring by braking. The result is a front end that turns-in crisply into a corner every time, with change of direction that is executed quickly and responsively. 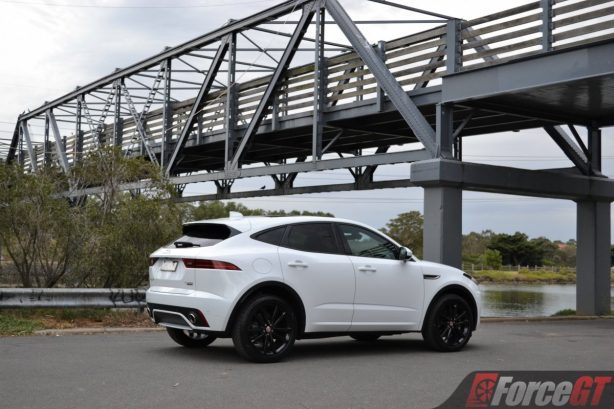 5 Things That Don’t Quite Stack Up

Prices for the E-Pace start at $47,750 for the D150 featuring all-wheel drive, a nine-speed automatic transmission and turbo-diesel four-cylinder engine as standard, and stretches all the way to the $83,733 E-Pace P300 R-Dynamic HSE.

It’s all well and good if you don’t mind the vanilla feel of the base models, but to get behind better engines such as the P300 you’d need to be spending close to the asking price of a Mercedes-AMG GLA 45 or Audi RS Q3. The thing is the Jaguar isn’t as quick as those two and doesn’t wear an SVR badge, the British marque’s equivalent to AMG and RS.

While our E-Pace comes standard with goodies such as 20-inch alloy wheels, power tailgate, premium Windsor leather upholstery and an 11-speaker sound system and navigation, there are some optional extras that really should be standard on a luxury car with such a hefty price tag, namely keyless entry ($950), digital radio ($430) and head-up display ($1630).

With hot hatch like handling prowess it’s no surprise then that the E-Pace feels firmer on the road than the average compact SUV, with imperfections on the road making themselves felt in the cabin. While it’s far from uncomfortable, those looking for a plusher ride might want to opt out the sport biased R-Dynamic trim for a standard set up, at least not until adaptive dampers become available. 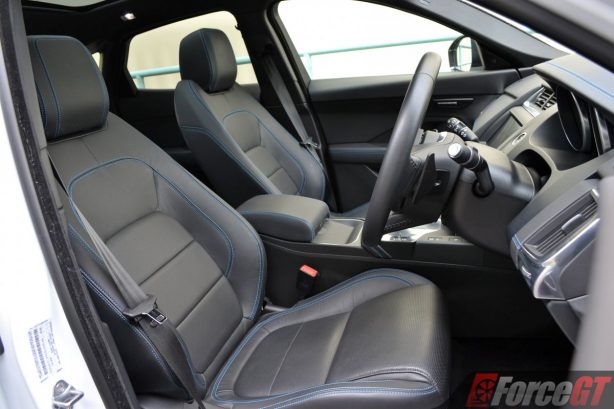 Being the most powerful variant on offer, the P300 is inherently also the thirstiest. Against Jaguar’s claimed fuel economy of 8.0L/100km, our E-Pace returned a combined average of 10.9L/100km at the end of our weeklong test. And its weight is partly to blame for that. Unlike the aluminium-intensive, XE-based F-Pace, the smaller E-Pace swaps aluminium for steel, which goes to explain its 1.8 tonne heft.

While we like the vibrant colours of the infotainment interface, we are certainly not a fan of its slow processing time. The built-in navigation system is slow in loading suggestions and playlists from your phone take a while to appear. It might be good enough in a mainstream offering but for a luxury car there’s definitely room for improvement here.

The Jaguar E-Pace is not only the best looking crossover in class but also the most dynamically competent. Backed by a surprisingly practical interior with designs inspired by the F-Type, the E-Pace is set to be Jaguar’s bestseller.

That said, there’s still room for improvement in the area of specification levels, infotainment responsiveness and ride comfort.