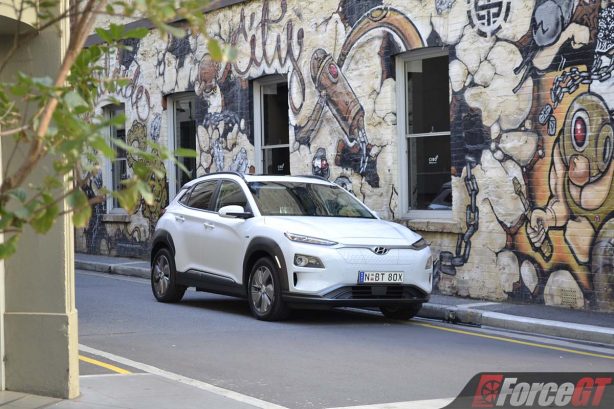 The 2019 Hyundai Kona Electric (as the name suggests) is the EV version of the Kona small SUV, which itself comes with a range of propulsion options.

It is built on the same line as its regular internal-combustion engine (ICE) siblings at the Korean giant’s Ulsan plant in South Korea; and unlike more expensive EV’s like the Jaguar I-Pace and Tesla Model X, the Kona EV doesn’t look radically different and share many of its body panels and components with the regular line-up to keep cost down.

Available in just two trim levels in Australia, the Kona Electric starts from $59,990 for the Elite, while our highly-specced Highlander comes in at $64,990 – all before on-road costs.

Its $60k price-point means doing your bit for the planet is an eye-watering $20,990 premium compare to the similarly specced Kona 1.6T Highlander. It also costs $15,000 more than the entry-level IONIQ Electirc hatch.

However, the extra outlay do get you an on trend SUV body styling as well as double the claimed cruising range of the IONIQ EV – 557km versus 280km (on NEDC cycle).

So what is it like to live with what is arguably a proper EV that most regular Joe can afford instead of the six-figure price tag of a Jaguar or I-Pace? It’s easier than what you might expect….

Is there anything interesting about its design? 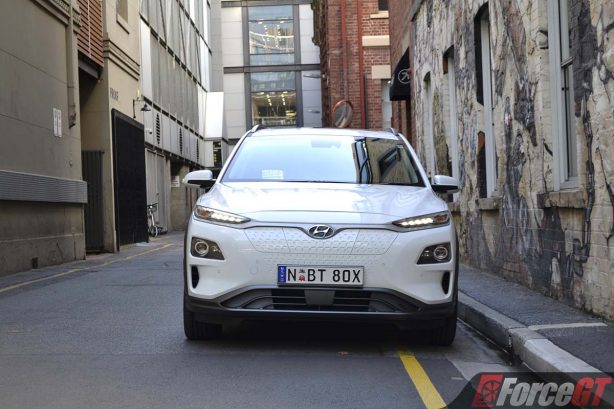 It might look more or less the same as a regular ICE Kona, except for its blanked out grille, different wheel design and missing fuel cap that is replaced by a charge port flap, but that’s also part of the Kona Electric’s appeal – it’s familiar inside and out to those who have yet to make the switch from more conventional models.

Of course, if the subtle design variance doesn’t do the trick, there’s the all-important ‘electric’ badge on the tailgate to instantly tell it apart. Its aerodynamics-friendly wheel design is also a quick give-away.

Being a Highlander means you get the full fruits, too, so it’s LED galore for the head and taillights, smart two-toned paint job and the aforementioned larger, model-specific 17-inch wheels.

It’s a similar story inside. The logically laid-out dashboard and interior is largely carried over from the regular Kona except for the unique raised centre console with push buttons for selecting P-R-N-D and sat-nav with its range of EV-specific sub-menus.

The interior is light and airy thanks to the use of lighter coloured plastics and trims, while the instrument cluster is fully digital and shared with the IONIQ.

Fit and finish is good but some of the materials used highlights the Kona’s humble origins and aren’t quite up to the same standard of more expensive EVs.

What features does it have? 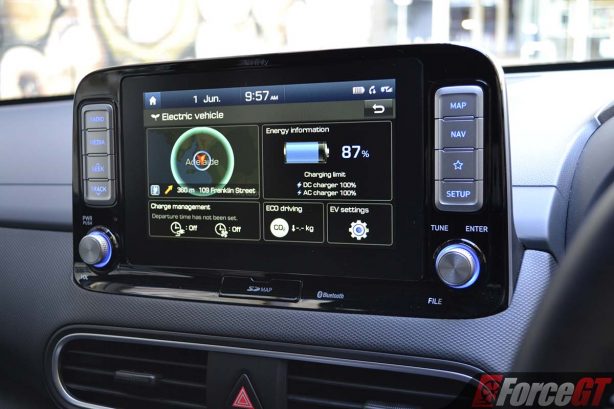 Like the rest of the Hyundai range, the Kona Electric comes generously equipped as well as a 337 litres cargo space.

The Highlander adds LED headlights with high-beam assist, LED taillights, front parking sensors, heated and ventilated front seats, a heated steering wheel that comes in handy during the winter months, a head-up dislpay (albeit a cheaper flip up type), a wireless phone charging pad, and an electric sunroof. However, the sunroof is deleted for those opting for a two-tone paint finish.

Both variants also come with built-in sat-nav that overlay the location of EV charging points onto the map and will display a radius of remaining range when you zoom out.

Like the IONIQ, owners can download Hyundai’s AutoLink Premium app that allows them to access the car’s ECU via their smartphone to get driving analysis, log private and business trip stats, remote access to door and climate control and a few other cool features. 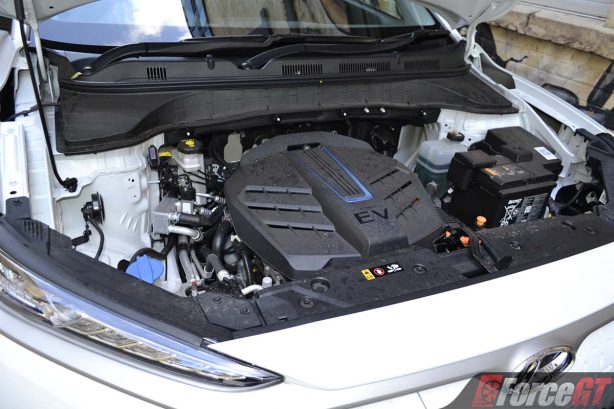 Despite its SUV outlook, power is directed exclusively to the front wheels via a 7.981 ratio single-speed reduction gear, which enables the electric SUV to sprint from zero to 100km/h in a claimed 7.6 seconds.

The motor is fed by a 64kWh lithium-ion polymer battery that provides a claimed real world electric driving range of 449km under the more realistic WLTP test protocol, compared to the NEDC standard. 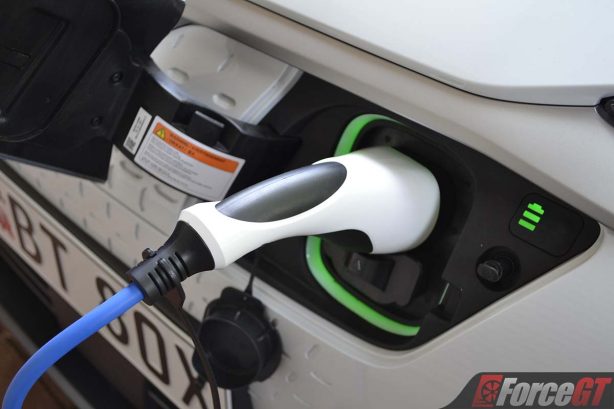 Hyundai claims it will take 54 minutes to top up to 80 per cent capacity using a 100kW direct current (DC) fast charger, and 75 minutes with a 50kW DC charger. However, in the real world and with only a normal household power socket at our disposure, it will take up to 31 hours to fully top up a completely depleted battery pack.

Energy consumption is a claimed 13.1kWh/100km although we saw an indicated 15.6kWh/100km over the course of approximately 400km of mostly city driving. Turning on the seat heating, air-conditioning, and aggressive driving like we did will also quickly kill range, too. 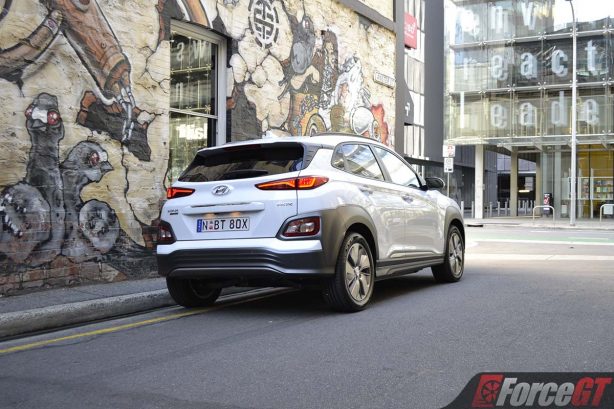 Just like it’s non-threatening styling, the Kona Electric isn’t radically different to drive compared to the regular ICE Kona. It fact, it’s lower centre of gravity – thanks to its battery pack under the floor – makes it feel more sure footed with less body roll.

There’s enough grip and agility to help you make the most of the impressive torque on tap. Its nimbleness is further helped by a fairly quick steering at 2.5 turns lock-to-lock. Flick the Drive Mode to Sport and you can almost drag race a V8 Commodore at the red light with an instant rush of torque.

Unlike a traditional ICE engine, engine braking is done via the configurable regenerative braking system using the steering wheel mounted paddles. Switched off, the system allows the Kona to coast off-throttle with almost no loss of momentum, but when dialled up to its most aggressive Level 3, you can drive the car using just the throttle. You can also brake the car by just holding the right hand side flappy pedal.

Around town, ride compliant is good with the Kona Electric soaking up most nasty ruts and potholes on our roads, while still offering good handling around through the bends.

However, the Kona’s humble origin means road noise is higher than what we have experienced in a ‘bespoke’ electric car. That’s not to say it’s noisy, there’s just noticeably more road noise coming into the cabin compare to the I-Pace we had on the same week.

Speaking of which, because there’s no engine, Hyundai has installed a sound generator that emits a low frequency noise at speeds below 30km/h to alert pedestrians of your presence for their safety. 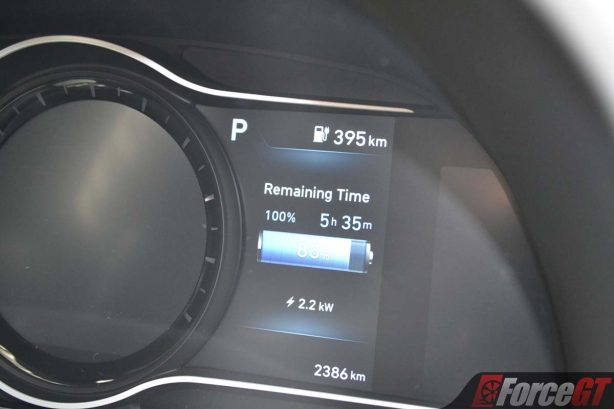 As we have noted in the IONIQ Electric review, charging costs vary depending on the time of the day if you are using a public charging station that are increasingly common in urban carparks. It costs between $0.10-0.30/kWh and is all done through a phone app called chargefox.

Based on our tested average energy consumption of 15.6kWh/100km, our 400km of emission free motoring would have cost us $18.72.

The Kona Electric’s servicing costs are also exceptionally reasonable, at just $165 a pop for the first 5 years. Like the regular Kona range, it only needs a visit to the dealer once a year or every 15,000km, whichever comes first.

The 2019 Hyundai Kona Electric is practical, stylish and, most of all, comes with a real world range to make range anxiety almost a thing of the past – with some planning.

It’s non-confronting to look at, great to drive, and is the most affordable all-electric SUV on the market.