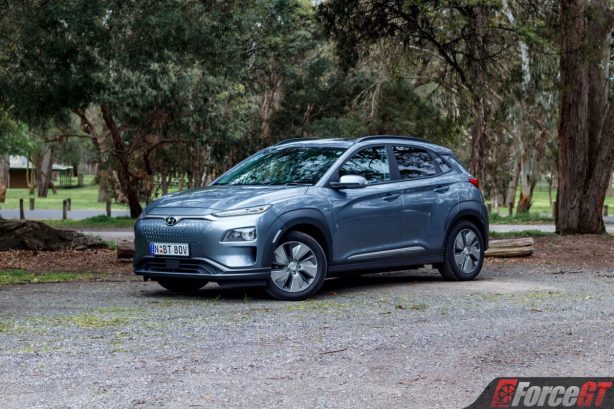 Hyundai seem to have really committed to an all electric future by offering both the Kona and Ioniq with completely electric powertrains and it’s the Kona that’s the company’s flagship in this space. They’re marketing the Kona Electric as a long term cost saving green machine that could save you money, and you’d want it to as the asking price of $59,990 is steep. 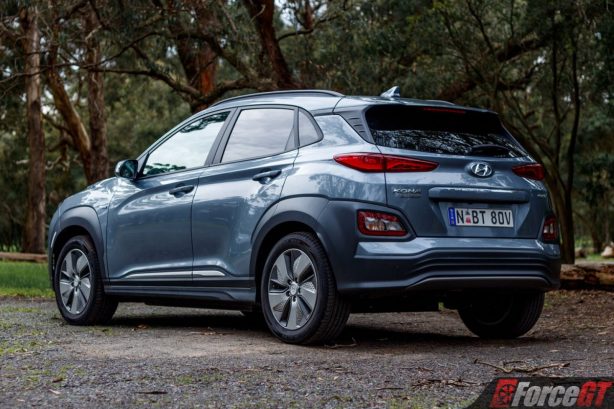 The higher-spec Kona Electric Highlander tested here costs even more at $64,990. For that money you could buy a top spec petrol Kona Highlander, have enough change left over to grab a base spec Kona Go and still be left with a grand of cash for a lavish night on the town. That’s the price you pay to enjoy cutting edge technology wrapped up in a reliable and familiar package, which is exactly what the Kona Electric is. The driving experience is 95% identical to any other car on the road, in fact some passengers had no clue the car was electric at all only finding out told so.

The differences compared to an ordinary car are subtle yet noticeable and the first to get your attention is that buttons replace the traditional gear selector which takes time to get used to. Three-point turns aren’t as simple, with a stick you know 100 per cent that you’ve jumped into reverse yet there’s always some ambiguity when it comes to a button.

The advantage is that the interior isn’t as cluttered up and Hyundai were able to restyle the centre console to have the important stuff located in the upper bridge section with storage and charging ports tucked away lower down. It’s a shame that Hyundai didn’t use the opportunity to add either ventilation or charging ports for rear passengers as part of the center console redesign. 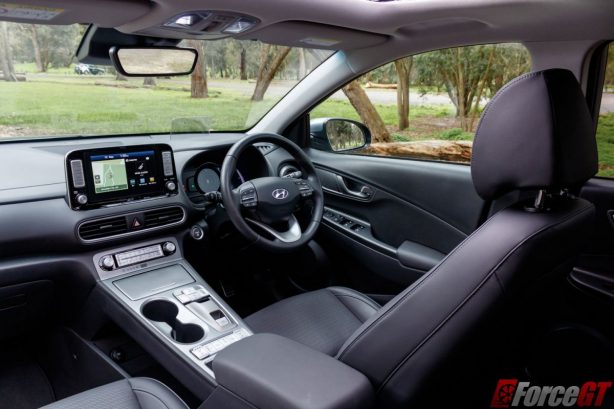 The interior of the Kona Electric tries hard to match the sticker price with perforated metal shrouds covering the door mounted speakers and an assortment of textured surfaces used throughout. At the end of the day the interior design is still based on the same one found in the base spec Kona and there’s only so much that can be done to dress it up.

The lack of noise from the engine highlights the road and wind noise and additional sound insulation would further improve the Kona’s refinement.

Inside and out the Kona Electric is very well built. There’re no rattles to be found and a sturdy and durable interior will have it hold up long after the 5-year warranty (8 for the battery) has expired. Much like its petrol brother the Kona Electric’s small size brings compromises to comfort for the driver with a steering column that’s too close to the knees and for those in the rear leg room is lacking. Rear visibility overall is limited due to the narrow rear window and rising rear passenger window line whereas up front the base of the A pillar hinders view. 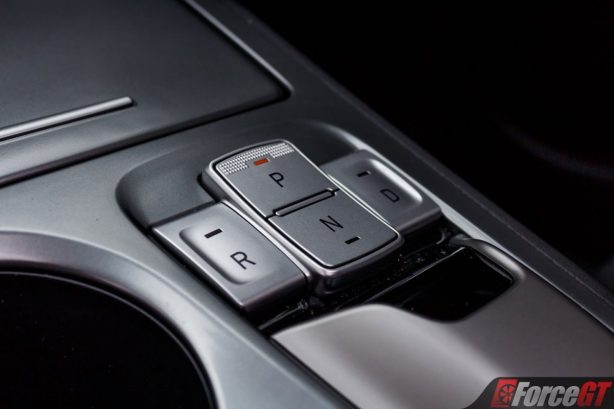 I’m not sure how Hyundai did it but they’ve been able to hide 64kWh of batteries inside the Kona’s body while still providing reasonable rear cargo space. There’s a total of 332L of storage capacity back there, down 29L from the petrol version and with no rear passengers and the 60/40 seats dropped you’ll see that climb to a maximum of 1,114L. Loading cargo in and out is back friendly due to the flat boot floor and securing everything in place is easy thanks to the cargo netting, bag hooks and tie down points. 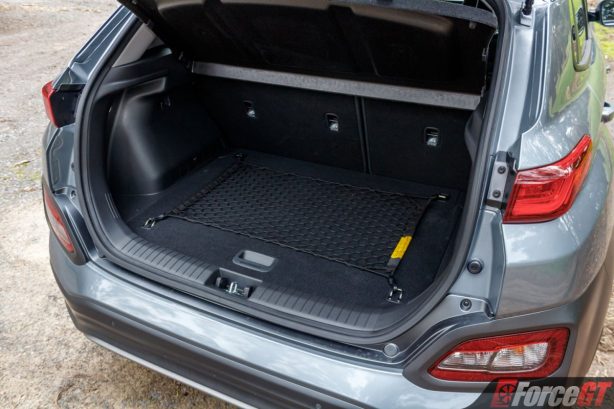 From the outside the Kona doesn’t make a big song and dance about its all-electric capabilities with the only hints being the aerodynamic front grille, food processor blade style wheels and a small electric badge on the rear. Personally I prefer the looks of the petrol model with its more aggressive and sharper lines up front but the Kona Electric still retains the majority of the styling cues that made the Kona a good looker in the first place.

Given it’s small size the Kona Electric surprises once on the move, the additional 390 kg completely changes the ride and driving characteristics with it feeling more like a fully fledged large SUV. Bumps and poor roads are cushioned out and the low center of gravity keeps the Kona Electric planted and stable with an excellent ride. The small 10.6m turning circle makes negotiating tight spaces effortless leaving the shop run that little bit easier. 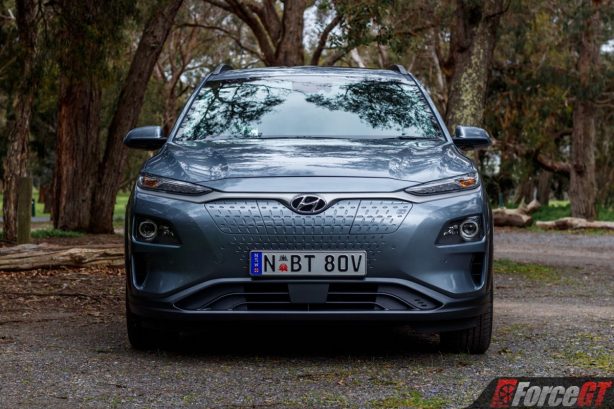 With an all-electric powertrain the Kona Electric has a 150kW electric motor that powers the front wheels and provides 395Nm instantly. You’ll see 100km/h come up from a stop in just 7.6 seconds making the Kona Electric more spritely than its appearance would lead on. The instant torque delivers more power than the tyres can handle with traction control doing its best to keep things civilised when you’re stretching the Kona’s legs. More work needs to be given to the traction control system so that full throttle acceleration is less of a challenge to manage.

When driving more sedately though, the Kona Electric settles down and provides extremely smooth and refined power delivery that won’t be matched by anything as vulgar as a hydrocarbon fueled engine. Like all electric vehicles there’s no waiting for gearboxes to shift down and no need to wind out the engine to reach maximum power, planting your foot has you off before the pedal even hits the firewall making the Kona Electric an overtaking machine. 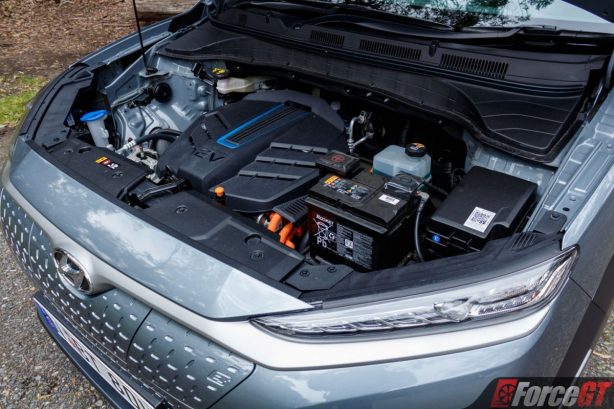 Acceleration is only half of the story as all that speed and momentum can be recycled back into the batteries through the regenerative braking system which for the most part works intuitively and reliably. It can be touchy at low speeds making smooth stops tricky when using the brake pedal but more often than not you won’t even need to touch it. The wheel mounted pedals can be used to set the passive braking level to your liking and you’ll find yourself excited to dial it all the way up and coast down hills as you watch your driving range increase. Braking in the Kona Electric is an endless game of trying to recover as much energy as possible.

Hyundai claims the 64kWh battery can get you a distance of 449km range which is possible should you opt to disable all creature comforts and cruise along well under the highway speed limit. In the real world you’ll be more likely to see about 380km of range around town between charges which for day to day driving is more than adequate. I was able to score a best of 11.8kWhr/100km on the freeways (542km range) and an overall average of 15.4kWhr/100km (415km range). 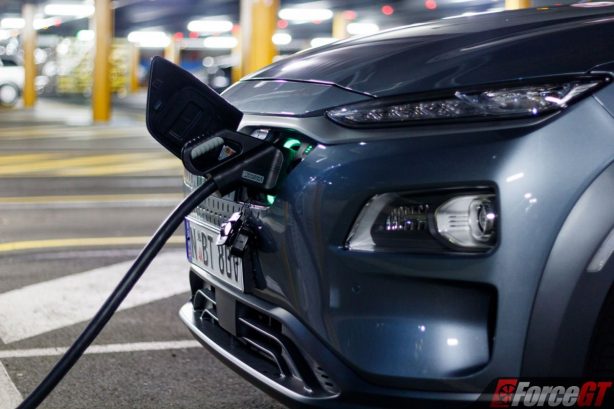 When it comes time to charge you can use the included 10 amp charge cable that’ll run from an ordinary power outlet, just be warned that a full charge can take 28 hours to complete. Hyundai does offer an optional Delta In-Home charger that can be installed at your residence to bring the charge duration down to 9.5 hours.

For longer trips away from home your charging options are restricted to the available charging stations dotted around the country. These come in a variety of kW ratings where higher rated units charge more quickly and the Kona Electric can handle a maximum of 100kW when connected to one of the fast charging DC stations. You’ll be able to replenish 80 per cent of the battery capacity in 54 minutes at 100kW, while 50kW will take longer at 75 minutes. The remaining 20 per cent takes almost an hour longer as the charging system charges far more slowly in an effort to prolong the life of the batteries. So for the second leg of any long distance trip you’ll need to plan ahead and make sure you can find another charging station within 360km unless you want to hang around for and wait. 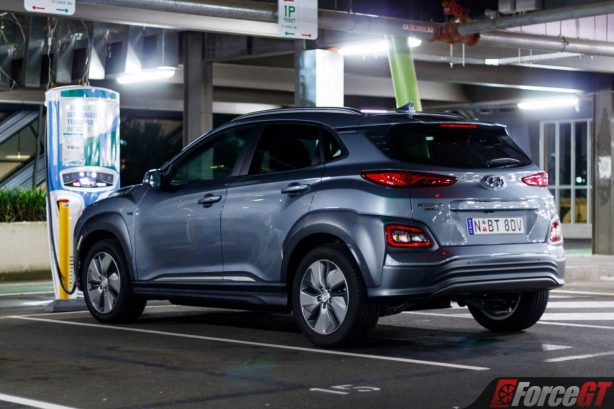 The cost to charge varies on where you go. Many shopping centres’ and urban based charge stations are free though many are limited to 22kW. Home charging will be tied to your providers rates and if you have a plan that supports offpeak charging, that’s the best time to juice up. You can program the Kona’s charging system to only activate within specific times to ensure you always get the most bang for buck.

Using my residential plans offpeak pricing of 17c/kWh the Kona will cost about $11 to reach a full charge which when compared to the cost of a full tank of petrol is an absolute bargain. The cost rises for longer trips as the remote fast charging stations charge around 40c/kWh making the 80 per cent charge come in at $20. 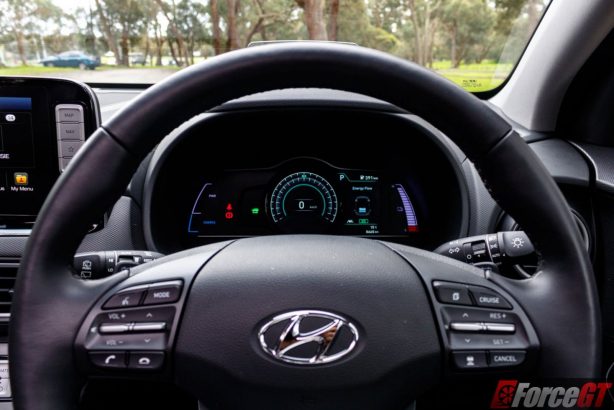 There’s other cost savings in the form of reduced servicing fees as the Kona Electric is serviced annually or every 15,000 km and price capped at $165 for the first 5 services. But do these lower running and servicing costs offset the initial outlay? For 99 per cent of people, the answer is no, not by a long shot. And that’s before we even factor in depreciation, it may be cutting edge tech right now, but what about in 5 years? The dream of saving money with electric cars is still just that, a dream.

Rather, the Kona Electric makes a stronger case for itself by being able to deliver leading edge technology right now and at a relatively approachable price point when compared to rival electric vehicles.

On the tech front Hyundai has jammed as many toys into the Kona Electric as they have available but you may be hesitant to make use of them as power heavy features will reduce your range. The heated steering wheel, seat and mirrors all take a noticeable toll on the range when activated. If you crank everything up to the max you’ll be looking at half your total range. That said the feature list is extensive and includes: 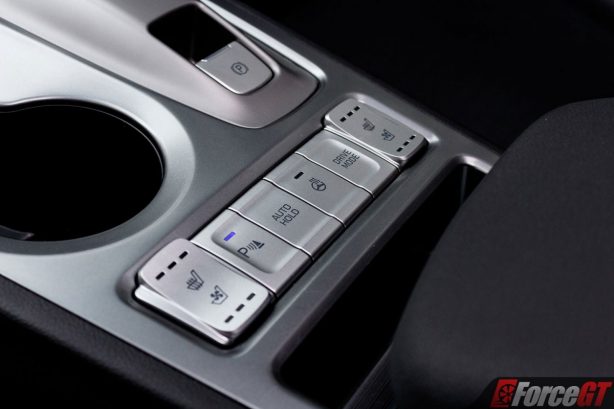 There’s a bunch of safety tech shoe-horned into the Kona Electric in the form of:

Eight speakers through an amplifier and DAB+ should have the stereo sounding top notch and for the most part it does, holding clarity to maximum volume and producing clean crisp audio, only lacking in the bass department. The heads up display is the flip up screen type which while still useful, doesn’t look as impressive as projection based systems. 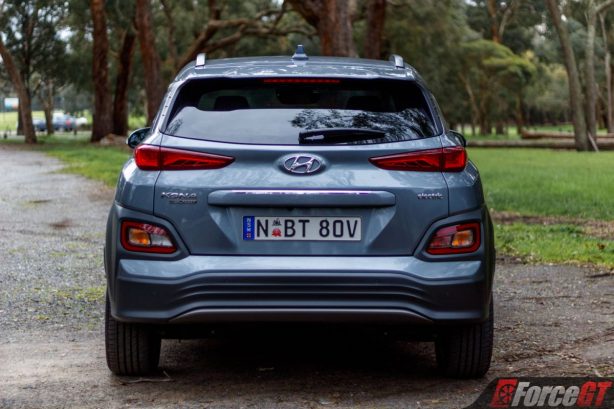 Hyundai has done an excellent job on taking modern electrical drivetrain technology and adapting it into a familiar SUV package. The smooth and grunty power delivery will have you looking at petrol engines as a relic of a time gone by. The price may be high compared to its less sophisticated petrol cousins however that’s the cost of progress and cutting edge technology will always have a price premium attached to it.