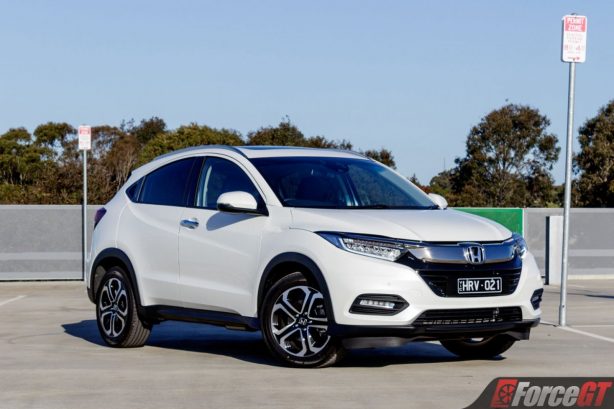 For small sized SUVs to stand out from their peers they need to strike the right balance of design flair and well thought out features while keeping the accountants happy. Sure you could throw every single piece of available tech into a car like the Honda HR-V but you’d also have to throw in a kidney or two to pay for it. In a very Honda like fashion, the updated 2019 HR-V VTi-LX treads the path of sensibility when selecting features keeping the price at a manageable $34,590.

On the styling front it’s no head turner but neither will it draw unnecessary attention to itself. The front end is composed of the turbine blade like LED headlights and the lavish use of smoked chrome finish for the centre. Compared to other models in the Honda range, the HR-V holds to a more conservative styling approach which carries through to both the side profile and the rear. There’s no uniquely identifiable design cues that give away what it is at a glance and it’s this approach that will ensure that it won’t look out of place in the years to come. 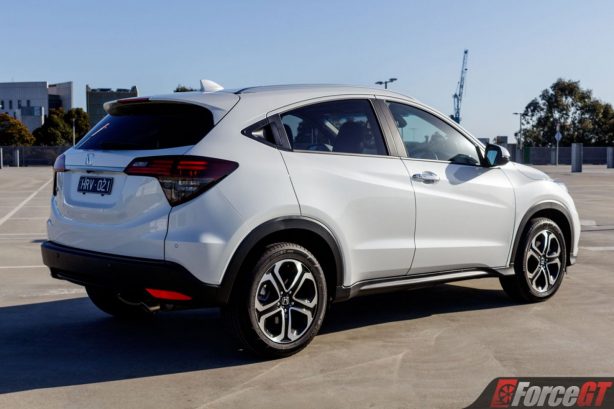 So maybe it’s a case of subtle on the outside and stylish on the inside? Except that’s not the case either as the abundance of black leather and black plastics do little to draw out a sense of excitement as you strap yourself in. The focus has been on providing a functional and comfortable interior rather than a quirky visual feast for the eyes. Material choices are decent with most frequently touched surfaces gaining the plush leather treatment and the triple set of vents on the passenger side is a welcome inclusion. 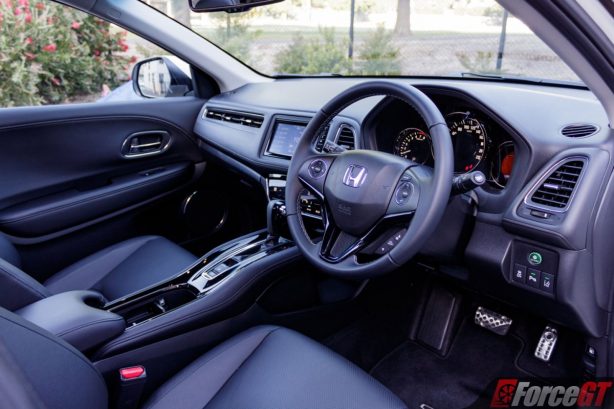 The centre console is split into two levels with the storage section tucked down and out of the way for all your loose items and phones while up top you’ve got a fancy set of drink holders complete with mini boom gates and flaps that drop to accommodate taller cups.

The instrument cluster has a cool gas stove burner effect going on behind the speedometer but I’d happily sacrifice it for a digital speed gauge. And while the trip computer display is functional it’s not exactly a cutting edge unit. I’m pretty sure the original Game Boy screen had a higher resolution than this one. The same can be said for the 7-inch infotainment interface which is quite outdated by current standards and limited in functionality.

Digital radio is a no show however the audio quality is decent with good bass being produced by the 6-speaker setup. What you do get is built-in satellite navigation and HDMI input for video, missing is both Android Auto and Apple CarPlay. 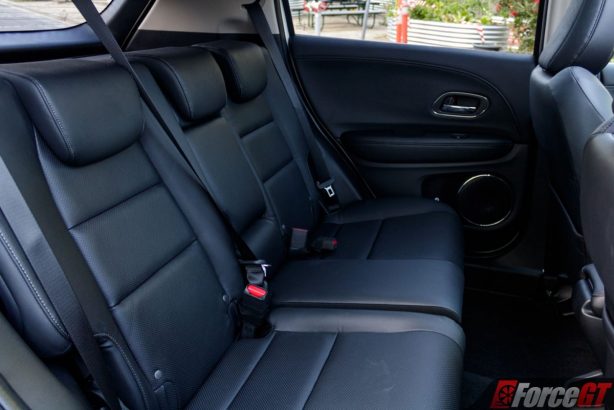 the HR-V is one the more spacious crossovers in class, with generous leg and headroom for the front row occupants. Matching the front, the rear seats provide good space for those with long necks and longer legs, two adults will fit in comfort where three becomes a squeeze, standard affair for mid to small SUVs.

From the rear of the centre console there’s only a single 12V power outlet to be fought over during long trips so make sure to also pack a USB adapter. Much like the Honda Jazz I reviewed previously in the year, the HR-V features Honda’s Magic Seats in the back. They’ll fold up and out of the way making storage of bulky and tall items a simple painless process while also adding extra storage space underneath when not in use. 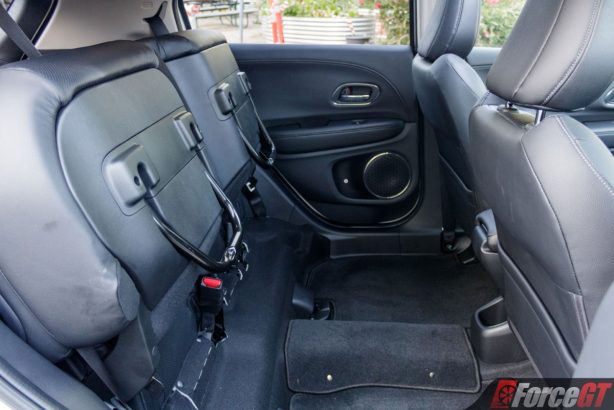 If that’s not enough room for your cargo the 60/40 seats can be dropped near flat bringing the usual 437L of boot space up to a maximum of 1462L. Pop up cargo tie down mounting brackets will help keep things where you left them and there’s a third and final 12V power outlet back there too. 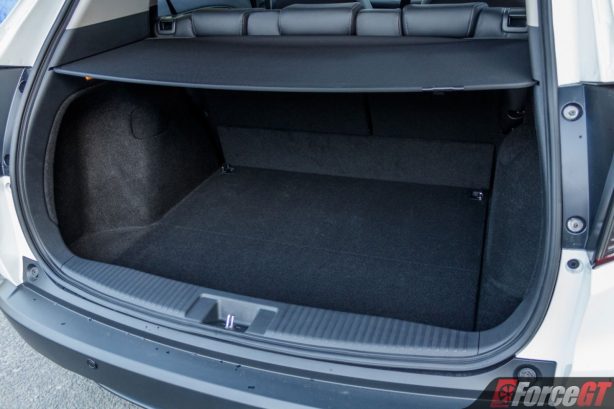 Under the bonnet you’ll find a 1.8-litre four-cylinder petrol single cam i-VTEC engine able to push out 105kW at 6,500rpm and 172Nm of torque at 4,300rpm. Both peak torque and power are high up in the rev range which means you’ve got to rev it out to tap into the performance. It makes itself heard when under load most likely due to sparing use of sound deadening as road and wind noise also work their way into the cabin at speed.

Power isn’t lacking with enough for day to day driving and the CVT automatic works its magic to keep things economical and drivable. With mostly freeway driving our HR-V finished up with 7.2L/100km compared to Honda’s 6.9L/100km figure so not too far off the mark, mind you those figures will climb if the majority of your driving is done around town. 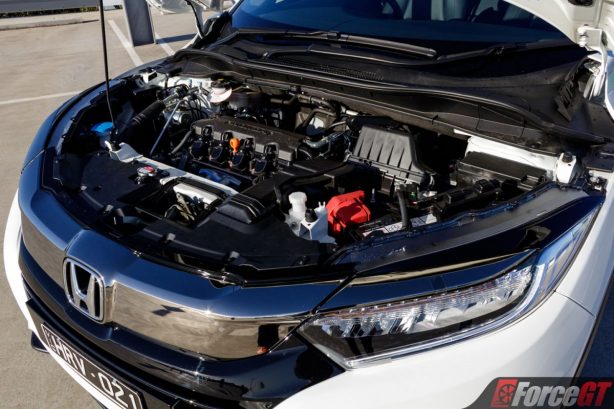 The HR-V weighs in with a kerb mass of 1,319kg which is light for a car of this size so you’d expect there to be a suspension setup to make the most of this for a more engaging drive. And it all looks that way with a decent turn in until the body roll kicks in. It’s quite noticeable and once loaded up the HR-V feels like it just wants to understeer until you back off to a more leisurely pace.

Comfort has been the focus here and over bumps the ride is soft and smooth, take it through medium paced corners and things remain civil, it’s only once you need rapid changes in direction that the body roll unsettles things.

I’d expect most HR-V’s to spend the majority of their lives in and out of car parks rather than winding coastal roads so the handling shortcomings aren’t a deal breaker. 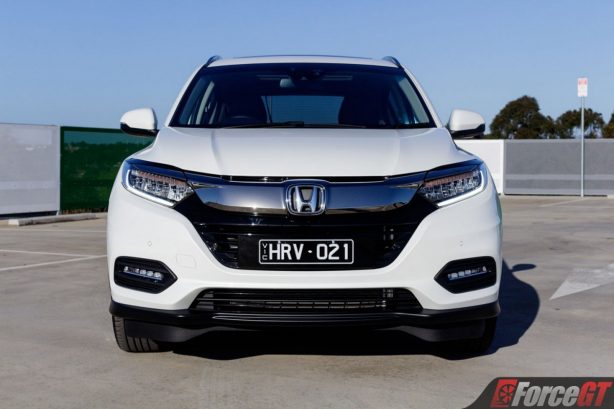 There’s ample visibility from the driver’s seat and the inclusion of the blind spot camera eliminates the anxiety from jumping into the left lane in heavy traffic. Car parks are no problem thanks to the front and rear parking sensors and when reversing both side mirrors pivot down for greater visibility which is a clever move from Honda. You’ve also got access to an excellent reversing camera with 3 modes, standard, wide and top down to give you a clear view when backing out. 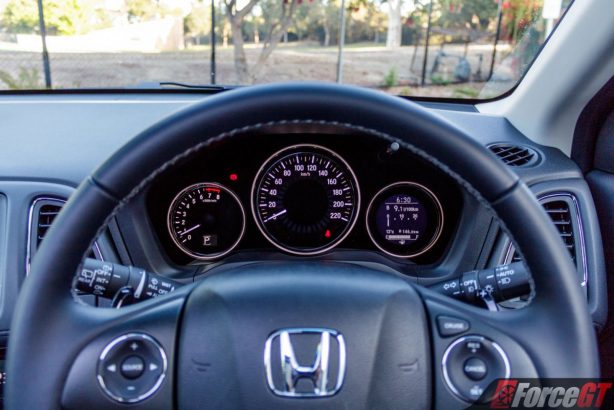 On the features front the range-topping HR-V VTi-LX is a bit of a mixed bag. There’s some extra stuff I wasn’t expecting but there’s also a few items that are missing and could have been easily added. It would have been great to see at least adaptive radar cruise control, digital radio and a digital speedometer along with the previously mentioned Android Auto / Apple CarPlay, all cheap and easy to add features that would have turned a strong feature list into an excellent one.

What you do get with the VTi-LX is:

Safety falls to a number of active and passive features which back up the 5 star ANCAP safety rating: 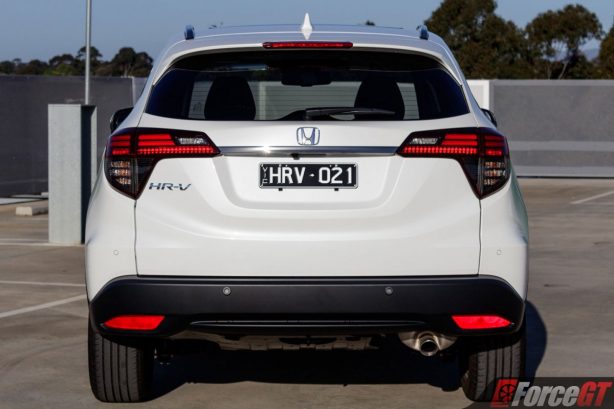 The Honda HR-V VTi-LX is the level headed approach to a small family SUV where functionality and comfort are top of the wish list. Combined with Honda’s extensive 5-year unlimited kilometre warranty and bulletproof reliability, the HR-V should be a car that inspires long term confidence that also packs a few tricks up its sleeves that the competition can’t offer.