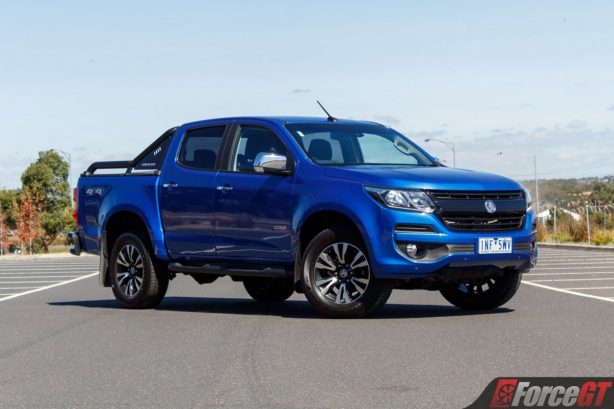 First impressions are important, mess up you’ll have your work cut out for you to set things right. It’s been over twenty years since I was first introduced a dual cab ute, it was my father’s company work car that we used for a holiday up to the Gold Coast from Melbourne. The machine of choice, a 1997 Toyota Hilux, the thing was loud, rattled, cramped and the words for passenger comfort hadn’t been translated into Japanese at the time as it lacked even rear head rests, not the ideal car of choice but the company provided fuel card made it the only choice.

The dual cab ute of today no longer commits war crimes on its occupants and has reached a level of comfort that’s made it a viable choice as the family recreational vehicle, a trusty work horse for the weekday and a go anywhere carry anything comfortable cruiser for the weekend.

The Holden Colorado has continued to evolve to suit the job and we’re taking a closer look at the top-spec 2019 Colorado LTZ 4×4 model. 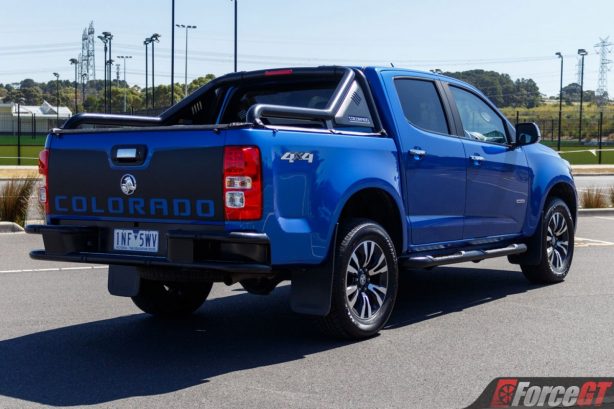 On the styling front Holden knows what they’re doing, they’ve styled the front grille, side steps, rear sports bar, rear bumper and rear tray door in black which contrasts strongly against the available body colors. The pumped guards house a set of 18-inch alloys that should remain scratch free thanks to their low offset design.

The Colorado is getting on in age yet doesn’t look dated in the slightest, easily keeping newer rivals honest with its bold looks. 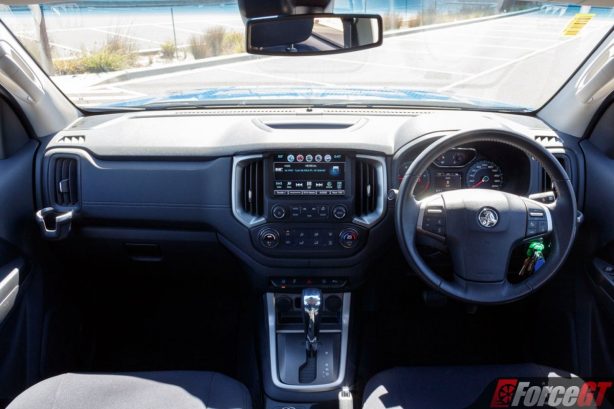 After climbing up into the cabin it’s the familiar Colorado interior that greets you, having been with us since the 2016 refresh, not much has changed. This time around you score some removables in the form of two drink holders up front for a total of four and heavy duty seat covers all round.

Build quality is decent with no audible trim or wiring rattles and they’ve even lined the door trim storage compartments with carpet to keep the rattle situation to a minimum no matter what you put in there.

The Thai-made Colorado is a globally sold vehicle which is evident by the split trim pieces used for the dashboard trim and more annoyingly the lack of a drivers mounted sun visor mirror. Another inherited left hand drive grip has the volume and track dials mounted in the wrong positions. 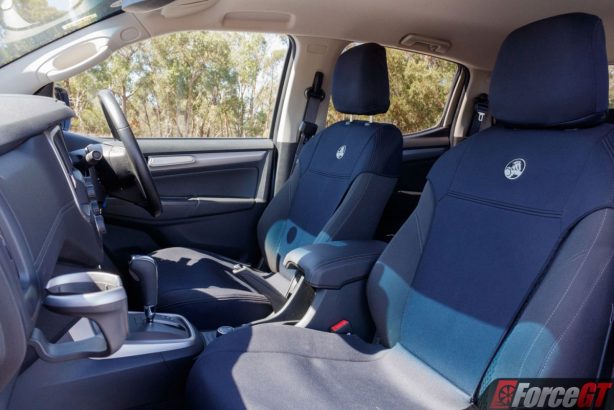 Telescopic steering columns are a luxury in all utes and the Colorado misses out leaving it with a compromised driving position which is a shame as the cloth lined seats themselves are comfortable and handle long trips with ease. So your options are to cramp up your legs or have the wheel beyond the optimal position.

Visibility in any ute is never amazing but Holden have done well to minimise the downsides. The Colorado makes use of giant mirrors to help with lane changes and the front and rear parking sensors combine with the rear view camera for tight carparks.

Passengers in the back have plenty of leg, head and shoulder room, fitting three adults back there isn’t a tall order. ISOFIX mounting points are included though older children will be fighting over the single 12V charging port mounted off the back of the centre console. If there’s just two in the rear a basic centre arm rest can fold down which lacks cup holders. Ditch the passengers and the rear 60/40 seats fold up providing additional storage if required. 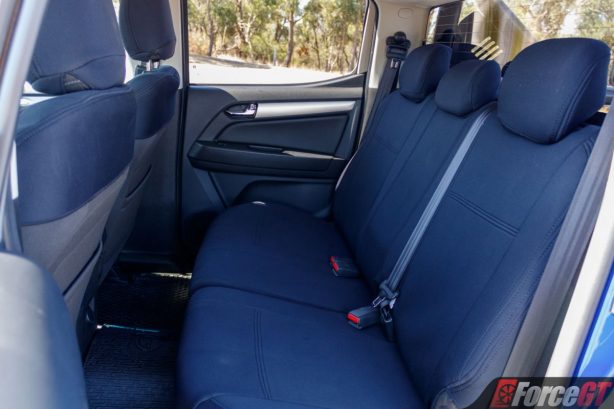 The main issue of contention for me with the previous Colorado was the cumbersome tonneau cover, which has made its return to annoy yet again. Removing it isn’t difficult in the slightest, just undo the velcro straps and rip it off, putting it back on is the cause of frustration. Rather than use a simple loop and stretched cord design, it requires the entire edge to be snapped into place, taking an eternity to complete for all sides ensuring that it’s flush for the whole length.

Another minor point of contention falls to the rear tailgate lock which isn’t tied into the key remote making entry into the tub a manual affair. 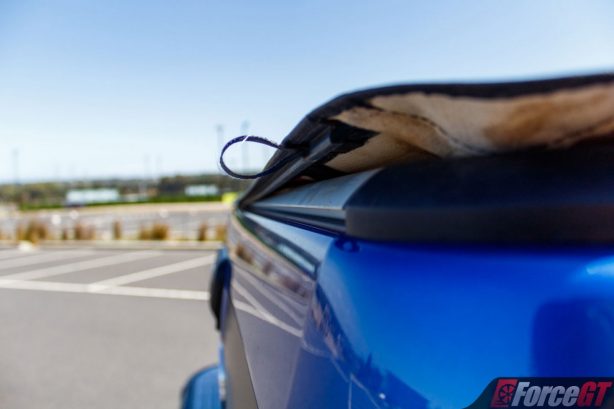 At the heart of all Colorado’s lies the excellent 2.8-litre Duramax Turbo Diesel engine which is good for 147kW at 3,600rpm and a chunky 500Nm of torque from 2,000rpm. Power comes on quickly and holds throughout the rev range thanks to its huge slab of torque making the engine drivable and versatile in many situations. The throttle is more responsive than most which matches up with the drivability of the engine well. Behind it all is a 6-speed automatic that remains smooth and composed with only the occasional rough upshift.

Tipping the scales at over two tons would leave you thinking the Colorado is a thirsty unit however that’s not the case at all. We tested it to the tune of 10.4L/100km which is not quite at the 8.7L/100km official rating but still decent for its class. 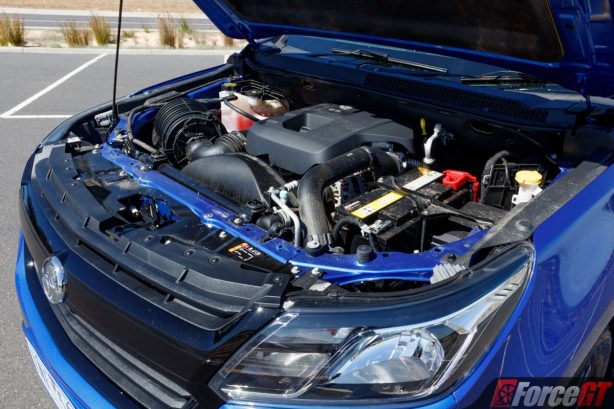 The handling shares the usual characteristics of all big utes, steering is heavy with plenty of turns lock to lock and overall grip levels do their best to cope with the weight, the limits more apparent in the wet than usual. That’s expected, what isn’t is just how well the Colorado handles day to day driving, it’s creeping into big 7 seater SUV territory offering up a comfortable ride and enough feedback through the wheel to keep you engaged with the road.

The brakes are another story though. The pedal travel is vast as they’re adapted to off-road conditions more so than day to day driving and lack feedback. They’ll pull up the car well when needed, just expect to put that pedal down further than usual when the anchors really need to be applied. 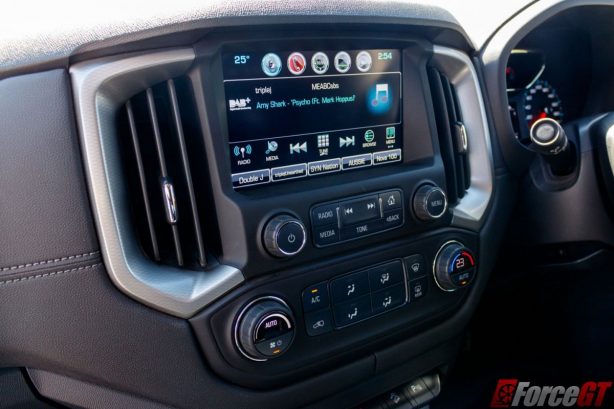 Bringing the whole package together is the Colorado’s strong feature set, most impressive of which is the remote start. Just click the lock button then hold the remote start button until it’s fired up, great for cooling or warming up the cabin as you focus on loading up the tub.

The infotainment and stereo package is also up to spec with the 8-inch display sat-nav equipped and able to deliver DAB+ audio through the 7 speakers to a higher than usual quality. It’s also Android Auto and Apple CarPlay equipped along with the usual AUX / USB and Bluetooth connectivity options.

Halogen rather than LED headlights light up your way and they’re electronically height aadjustable as well and dusk sensing to boot.

Rain sensing wipers make an appearance along with power folding and heated door mirrors adding convenience to the Colorado. Cruise control is included though missing both speed limited and active radar abilities. 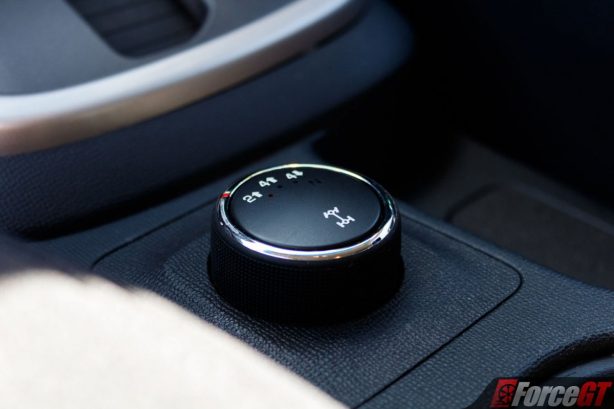 Holden hasn’t skimped on the safety tech either with the Colorado maintaining its 5-star ANCAP safety rating, aided by the all important curtain airbags, front and rear parking sensors, lane departure warning system and forward collision warning. Both rollover stability control and trailer sway control are also included to keep your roof pointed at the sky instead of scratched up and inverted.

For off-road excursions you’ll be able to rely on the hill descent control, tyre pressure monitoring and shift on the fly 4WD system so long as you keep it under 10km/h at the time. Traction is enhanced by the helical LSD and if the ground clearance isn’t enough to protect the engine from rocks the sump guard will. 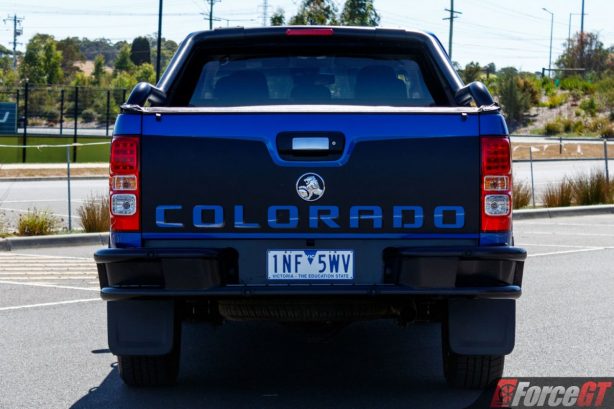 A focused effort on improving the Colorado over time has paid off for Holden, particularly in the styling and refinement departments. The strong feature set, well sorted handling and impressive engine tie the package together making it the versatile lifestyle vehicle meeting the needs of Australian families with a spirit for adventure.