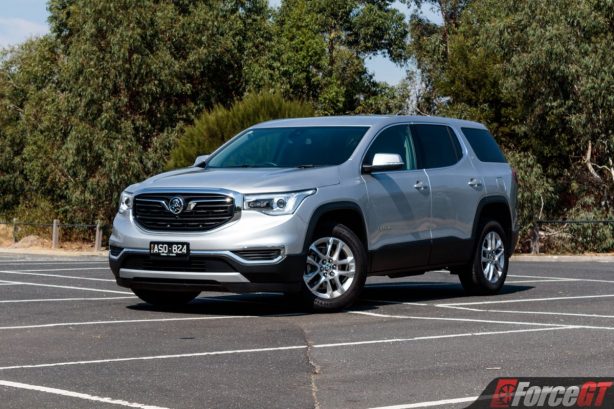 When it comes to 7 seater SUVs there’s two different types commonly found. The first and more prevalent is the adapted 5 seater SUV that’s sacrificed some luggage space for a third row. These may have 7 seats but that third row is sized for children which strips capability away from the platform. The second type is what we’re looking at today, built from the ground up to be a true 7 seater SUV with room for adults in every seat.

The Acadia is the big boss of Holden’s SUV line up and we’re testing the entry-level LT model in all-wheel drive format to see if Holden’s latest family hauler can impress. 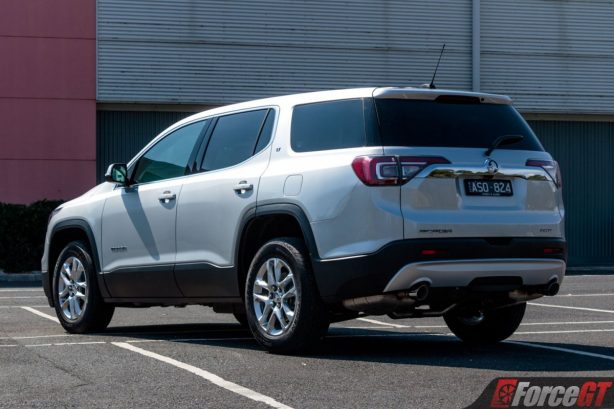 The Acadia hails from the United States where it’s sold as the GMC Acadia which means styling is distinctly American. That means plenty of chrome highlights and truck derived styling overall, which is a nice way of saying it’s not a great looker.

It feels like styling was handled by three separate teams, each focusing on either the front, mid or rear and at no point were they able to communicate to one another. There are some rugged and imposing angles, however the whole package does look somewhat odd with the broken up window line and protruding front chin.

The interior is a mix of cloth, plastic and leather which seems to be built well leaving no creaks or rattles indicating a quality build. The story changes when it comes to tactile feel with many switches feeling cheap thanks to lots of play when activated, particularly the handbrake button and gear selector.

The other main annoyance comes from the steering wheel design where the plastic is uncomfortably placed directly at the 3 and 9 o’clock positions right where your palm usually goes.

Thankfully there’s no issues with comfort when it comes to the seating position, 6 way electronic adjustability is available for the driver and the cloth seats are great on long trips. 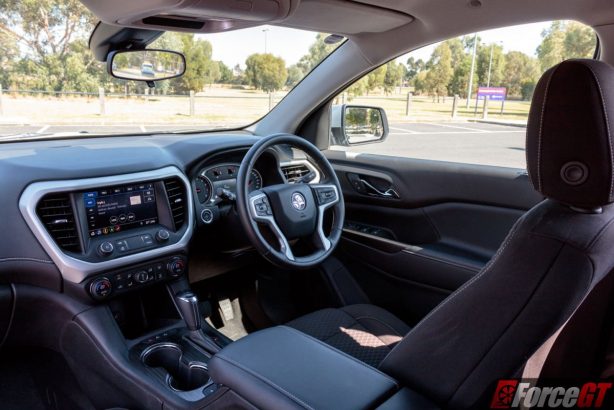 Front storage falls to the center console pocket and arm rest, dual drink holders, door storage pockets, glovebox and ceiling mounted sunglasses storage unit. Rivals have innovated in this space by offering clever storage solutions to the side and below the center console yet the Acadia sticks to the traditional approach for the front.

In the middle row seats you do score a pull out bucket storage bin from the back of the center console. Also back there lies dual USB charge ports and dedicated air-con controls where the third zone is fed air via the ceiling vents for both rows. The outer seats score ISOFIX mounting points and the center armrest pops down revealing a further two drink holders. 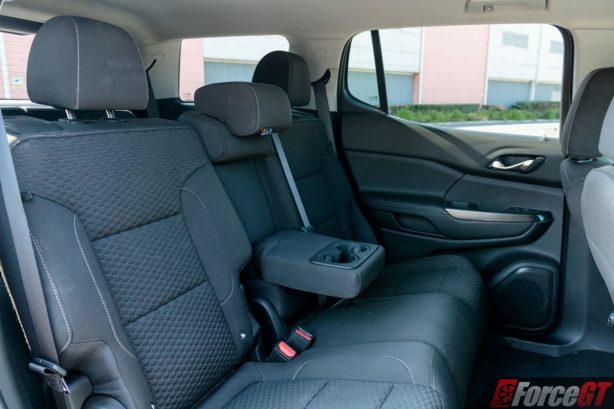 Mid row room is excellent thanks to the sliding and reclining seats. There’s leg room for days and head room to match.

A quick flip of the seat lever grants access to the rear which is easy enough to get in and out of. Once in place you’ll notice that there’s plenty of room for full grown passengers back there as long as the mid row isn’t slid and reclined all the way back. One thing to watch out for is when the mid row needs to lock in place as the floor bracket design is poorly thought out and can clamp down on rogue feet and toes.

With all seats up the Acadia has a usable 292 litres of boot space available that can extend up to 2,102 litres with both middle and third rows dropped. In order to get the mid row 60/40 seats flat you do need to remove the center headrest which again, is a poor design decision.

On the plus side, dropping those seats is a walk in the park as there’s two levers that can be activated from the boot to drop them on the spot. Additional storage is available under the flat boot floor and there’s no drop down either so retrieving heavy luggage won’t destroy your back in the process. 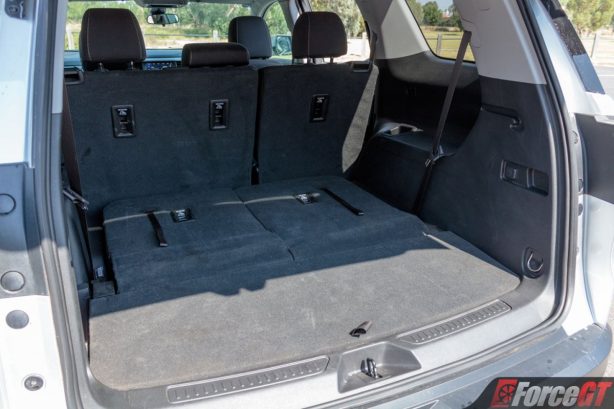 The Acadia is a big machine and requires an equally sized engine to haul itself around. That job falls to the atmospheric 3.6-litre V6 which can offer up 231kW when revved out to 6,600rpm and 367Nm of torque at 5,000rpm. It’s a grunty engine with plenty of poke that comes on linearly as it revs out, and one that also makes a great noise up top. The power comes on early enough and if you wind it out you can really get up and going at pace. It’s almost too eager in some situations as there’s no eco mode to dull the throttle leading to unwanted wheel spin so a delicate touch is required on the throttle. 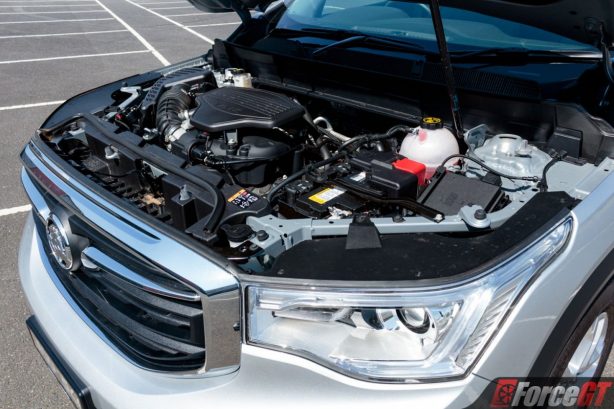 Putting the power to the road is the domain of the 9-speed automatic gearbox, which matches well to the torquey characteristics of the engine and does its best to keep the fuel economy figures down. Big V6’s have never been praised for their fuel economy and it’s the same story with the Acadia. Against the rated at 9.3L/100km we managed a more thirsty 13.1L/100km which is miles behind its turbo diesel or petrol fueled competition.

The Acadia’s V6 can shut down some cylinders when not needed and the auto stop start feature helps further but the technology gap between a naturally aspirated engine and a well managed turbo mill is blatantly evident. The saving grace is that you’ll only be filling up the 82-litre tank with 91 octane fuel which is far cheaper than the premium stuff. 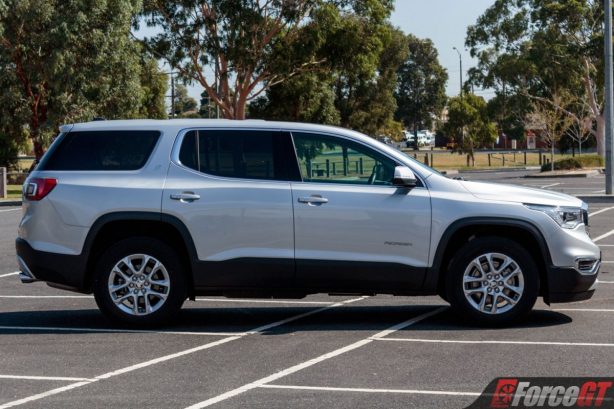 One area that the Acadia disguises its bulk is in the handling department. It feels far smaller than it is with limited body roll and predictable handling. Decent suspension travel will sort out all but the biggest of speed bumps and potholes while the heavy steering keeps you more engaged with the road than some rivals. The Holden engineers have done a top job on making sure the Acadia is well suited to Australian roads. 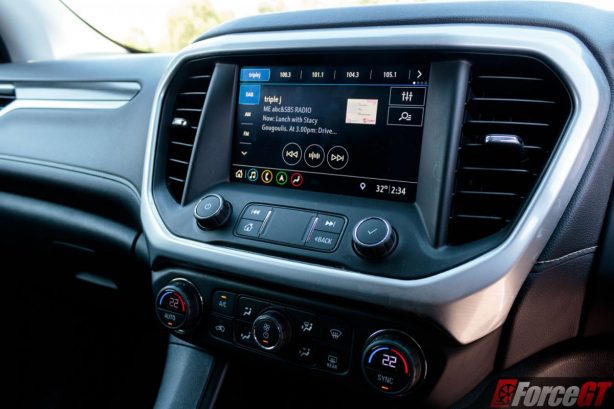 The big allure of the Acadia is the extensive comfort and safety feature list that it comes with even in base spec. There’s a lot of clever tech going on that’s been well integrated throughout. The Acadia comes with traffic sign recognition which is convenient on its own but Holden has taken the tech one step further by allowing it to automatically set the speed limited cruise control limit.

The rear cross traffic alert system has also been improved with the addition of haptic feedback in the seat base which vibrate on either the left or right side depending on where the traffic is coming from, very cool.

The Acadia LT doesn’t skimp out on safety features at all with the following all included:

For a base spec model, that’s a serious set of equipment with a strong emphasis on safety. The audio situation is respectable as well, with the sound quality above average with punchy bass only missing the higher clarity of upper scale setups. The Acadia also comes with Holden’s latest infotainment interface which is much improved on the old system visually and intuitively. 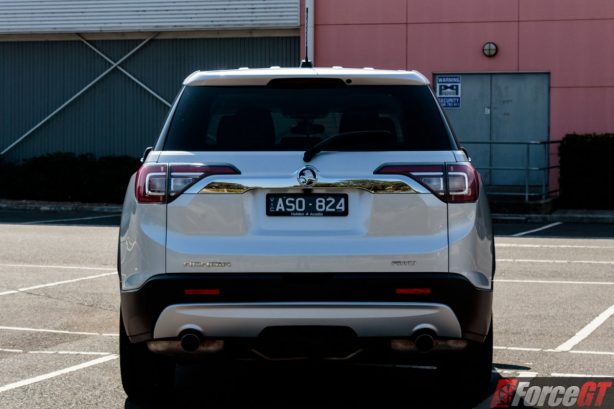 There’re not many cars out there that can seat 7 in comfort and the Holden Acadia pulls off this feat effortlessly making the most of its American size.

Some design flaws aside, the strong safety and feature list gives the Acadia an edge over rivals and the 5-year warranty further makes it a strong performer for its class.

Holden’s latest SUV offering is definitely worth a look.

Previous Is this the 2020 Mercedes-AMG CLA 45?
Next 2019 BMW X3 M, X4 M Competition pricing and specifications