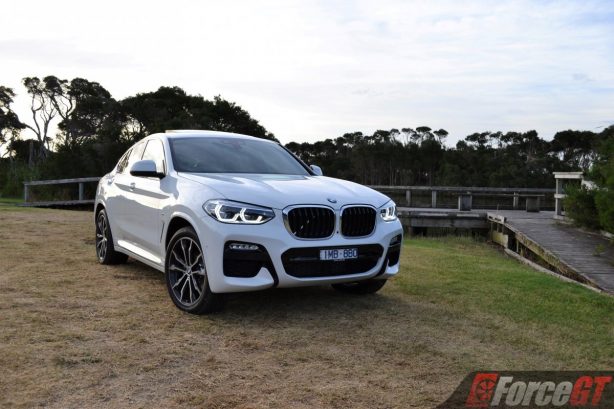 The fact that the BMW X4 is now in its second-generation says something about its appeal. People do buy cars like the X4. And yes ‘cars’ were plural because the segment that the X4 single-handedly created has now spawned a competitor in the form of the Mercedes-Benz GLC Coupe, and later this year both will be joined by the new Audi Q4.

The car-buying demographic is constantly evolving and on the back of the SUV craze, people now want a little more style in their crossovers, nevermind losing a bit of practicality. It’s all in the name of ‘standing out from the crowd’. And it’s why this once niche segment is now gaining popularity.

BMW’s second attempt at this style-first crossover is an important one as it seeks to fight back the increasingly fierce competition. So, let’s take a closer look at the new X4 in the form of the sole diesel offering in the four-tier line-up – the $79,900 plus on-road costs X4 xDrive20d. 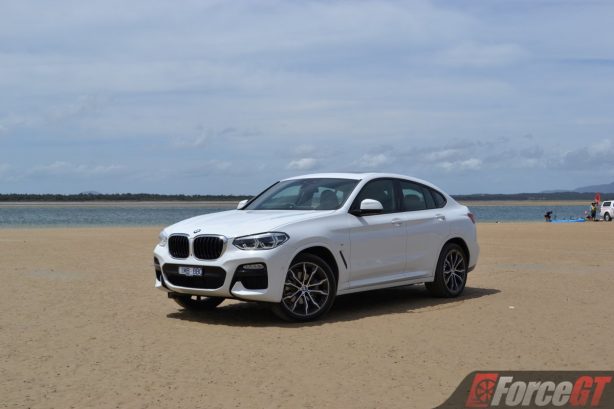 The BMW X3-based mid-size SUV coupe has been completely redesigned for this second generation. It might just as well because the previous model was a missed opportunity in the styling department. While still looking a bit odd (like a high-riding 4-Series Gran Coupe), the new X4 has much better proportions, with the sloping coupe-ish roof line blending more smoothly to the rear deck than before and the X3-derived front fascia lending it a more purposeful face.

Where the old X4 looked more like an undernourished and restrained derivative of the X6, the new one has really come into its own. This time around the design works. What you end up with is a sports and adventure vehicle that actually looks relatively sleek and unique. And it’s a design that will grow on you overtime. 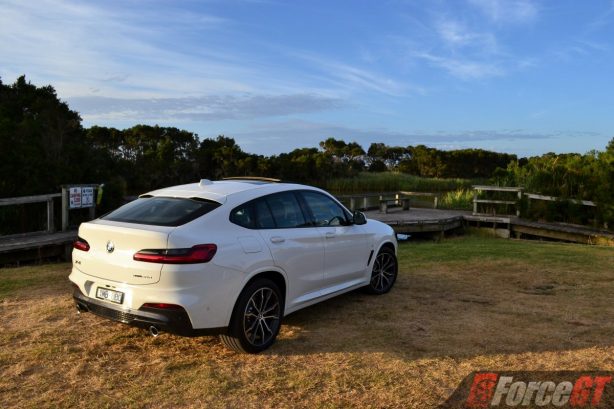 All new X4’s sold in Australia come standard with the M Sport package, which means we get sportier M Sport bumpers, gloss black framing around the windows and 19-inch M alloy wheels. Our tester has been beefed up with the optional 20-inch double-spoke M wheels ($1,700) and I have to say they look rather good.

Despite its coupe-ish looks, you still climb to get into the X4 much like a normal SUV rather than sink into it like getting into a sports coupe. Rear passengers will have to be more mindful not to hit their heads against the sloping roof-line though.

While ingress and egress is very SUV-like, visibility is not. Forward vision is fine except for the hindrance from the rather thick A pillar base, but the view through the rear is mediocre due to the small rear window. Is this an issue during parking though? Not really thanks to the myriad of parking assistant tech such as rear view camera, surround view, panorama view and even 3D view which projects a 3D image of the entire area surrounding the vehicle (imagine a view of your car from kerbside). Navigating the X4 through tight spaces is therefore an absolute breeze. 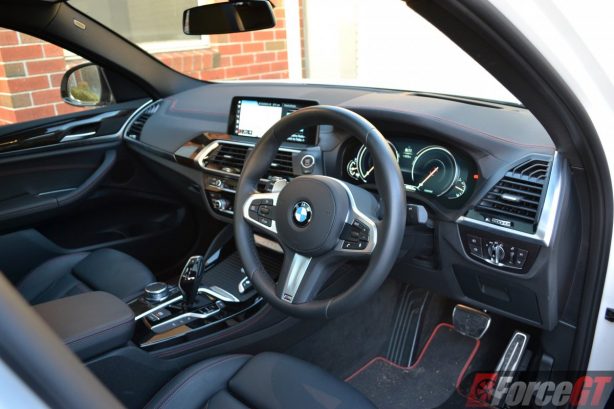 The interior is almost identical to that of the X3, save for a few X4 badges. This means a driver-oriented dashboard layout typical of BMW, usable storage compartments under the center console and truly thick door pockets for your water bottle, wallet or folded umbrella.

While the cabin is a big step up from before, both in terms of materials and fit and finish, some of our testers – myself included – still think the Mercedes GLC offer just a bit more glamour on the inside.

Nevertheless, our X4 boasts high-gloss black panels for the automatic climate control and dashes of aluminium trim above the glove box, centre console and doors for a classy look. Cabin ambiance is lifted further with the optional Oak Dark high-gloss fine-wood trim with chrome pearl finishing ($300). 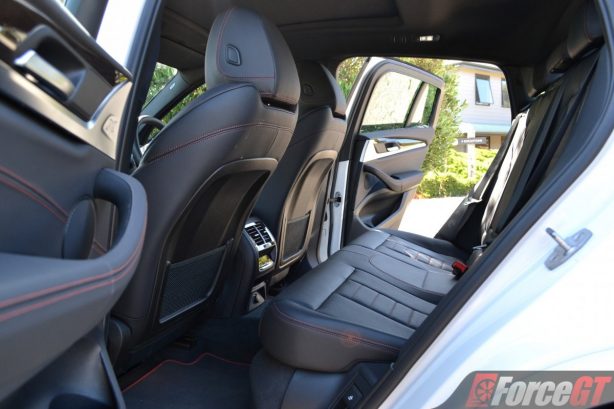 Replacing conventional gauges with a full LCD in the instrument cluster, the multi-function instrument display serves up crisp and clear graphics and digitised analogue gauges that can change their theme and colour based on the driving mode selected. It looks cool and the dual physical rings around the animated gauges give the display some depth similar to physical gauges. But that seems to be everything about it. There isn’t the ability to bring the map across, like those found in rival systems, or configure individual items on the display. Customisation in the BMW system is relatively limited.

Thankfully, the BMW has the industry’s best infotainment control system, with an easy-to-use interface through the excellent iDrive system and a voice command function that gets you every single time. We entered more than 10 different addresses into the navigation using voice over our week-long test and it didn’t miss one. Well done, BMW iDrive team. 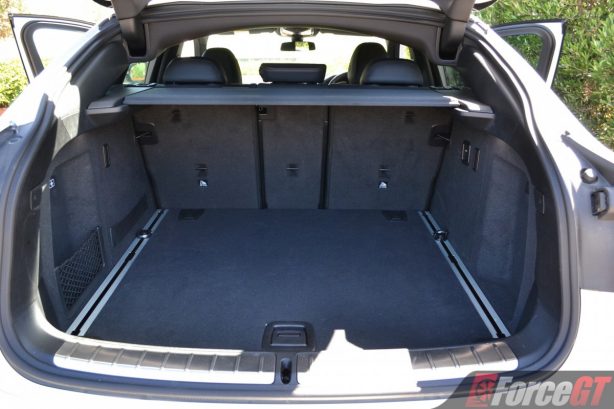 While legroom is generous for front and rear passengers, the lower height means headroom is slightly compromised compared to the X3, especially for rear passengers. The tapering roof also robs boot space, with the X4 packing 525 litres of capacity compared to the X3’s 550 litres. With the 40/20/40 split rear seats folded, the X4’s 1430 litres of space is significantly less than the X3’s 1600 litres.

Due to the lack of a spare wheel (the X4 rolls on run-flat tyres), additional storage is available under the boot floor. This compartment is accessed by lifting the boot floor cover, which is handily supported by gas struts in the 2018 model year X4s. However, the struts are no longer fitted to 2019 models due to misuse – owners apparently lift cover with heavy load on top, damaging the struts and causing the cover to collapse.

All that being said, if you have a young family, the X4 would still do the job for that weekend trip, with more space than a 3 Series and no less comfortable.

The X4 xDrive 20d is powered by a 2.0-litre turbocharged four-cylinder diesel engine that produces 140kW at 4000rpm and some 400Nm of torque from 1750-2500rpm. The clatter at idle leaves no confusion as to what’s fueling it but once revs are fed it’s petrol-like quiet, smooth and refined, only becoming vocal again in the upper revs.

BMW’s new range of diesel engines is some of the best in the segment and the all-aluminium unit in the 20d is no exception, delivering relatively sharp response, minimal turbo lag and loads of mid-range pull. The 8-speed automatic transmission it’s paired with is just as smooth and quick in channeling power to the constant all-wheel drive system.

The 20d’s 8-second 0 to 100km/h sprint time is not particularly quick these days but there’s enough torque for swift overtaking and effortless day-to-day running. 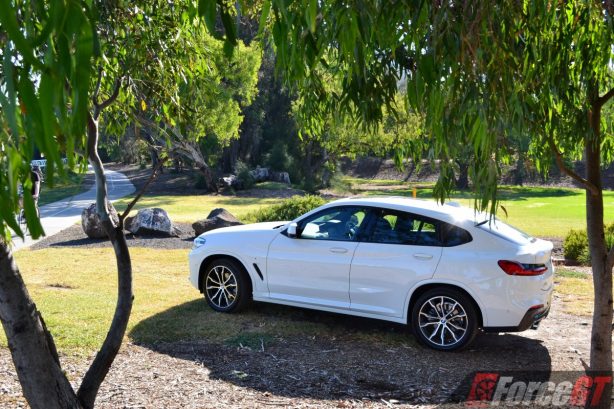 All X4 models are fitted with auto idle stop/start that shuts down the engine when the vehicle comes to a temporary stop. We find the system not as pedal adjustable as we’d like, as even the slightest application of brake pedal will activate engine cut off when coming to a halt, which can be annoying when you are just trying to inch forward in traffic. However, the system is quick to fire up the moment the brake pedal is released for a smooth takeoff. It can also be turned off if you so desired.

Does the X4’s firmer damping, wider tyres, and lower center of gravity compare to the X3 translate to sports car-like handling on the road? Not quite. While, there’s no denying the tight and taut underpinnings let you feel the road like a sporty car, they are held back by nearly 1.7 tonne of kerb weight and a high ride height. It still turns in neatly with little body roll, aided by tenacious grip from those run-flat tyres, but physics still rule when it comes to hustling such heft around the bends.

As much as the X4 is a better driving machine than a conventional SUV, it’s more of a touring car with sporty intentions than a full-fledged dynamically sharpened SUV. And it shows in undulating country roads, with the variably damped M Sport suspension delivering a forgiving ride that is not much firmer than the softer X3. 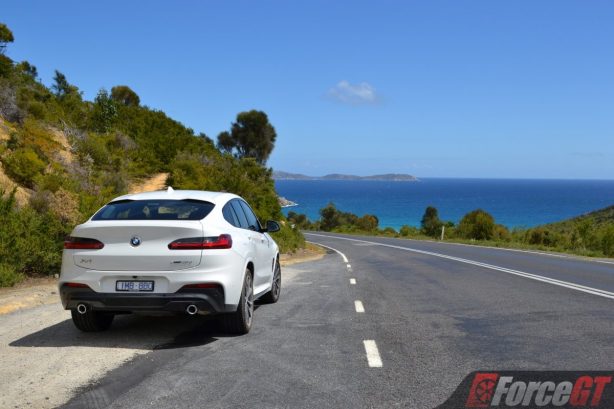 Perhaps, the steering is weakest link of the package for its over-assisted feel just off center and lack of feedback. It’s only once lock is wound that it regains the precision that you’d have come to expect from a BMW tiller.

For the odd off-road excursions, care must be taken as the X4’s relatively low ground clearance for an SUV makes it near useless on anywhere more than a gravel track.

Unlike most manufacturers, BMW offers condition-based servicing for its vehicles. Rather than having a set servicing schedule based on distance or time interval, the X4’s servicing is determined based on how the car is driven. This means servicing is more frequent if the car is often used for short distance travel or in extreme cold condition, or less frequent otherwise.

The BMW Service Inclusive Basic package covers your scheduled servicing needs for 5 years or 80,000 km, whichever comes first. With packages starting from $1,340, the Basic package includes your annual vehicle checks, oil changes, all filters, spark plugs and labour costs for the duration of the package.

Being a diesel, the X4 20d impresses with excellent fuel economy. If you’re careful with your right foot, it’s capable of over 1000km on a single tank (60 litres). Over our week-long test, we averaged 6.4L/100km on the trip computer, not far off the rated figure of 5.8L/100km.

If people were buying the previous generation X4, then BMW can expect this new one to find even more homes. The new X4 finally feels like a complete SUV, rather than one that is adapted to fill a particular niche market segment. The unique looks coupled with sporty handling to make the X4 a viable choice for those who see the usual SUV as a little too bland and domesticated. But beware because the X4 is still a compromised vehicle with a less practical cabin.