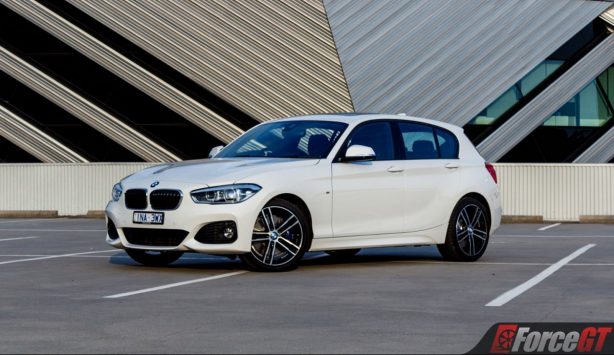 This makes the current BMW 1 Series something of a rarity, where else are you going to be able to get yourself a practical rear-wheel drive hatch that’s a blast on the weekends and comfortable day to day? The short answer is that you simply can’t and most likely will never have the opportunity to do so again. 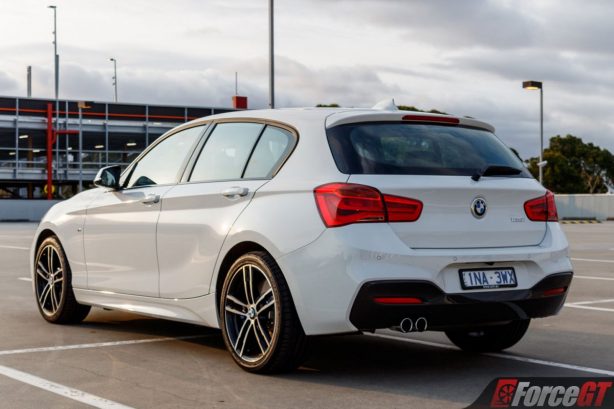 BMW has always positioned themselves as more driving focused compared to their counterparts and this strikes true for the mid-range 125i M Sport right from the moment you drop into the drivers seat. The usual assortment of electric adjustability is accounted for along with two memory settings however it’s the inclusion of the torso gripping side bolster adjustment that’ll pin you in place when you need it most.

BMW has even lined the inside of the transmission tunnel with padding to brace your legs against which is a hint that this hatch still has a strong motoring spirit hidden beneath it’s conservative Euro appearance. 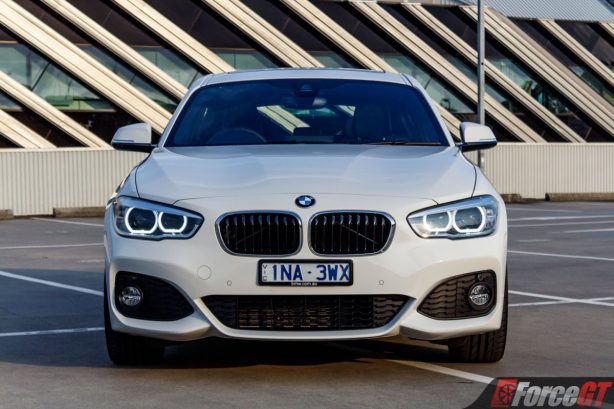 It’s all very neat and tidy on the outside allowing your eyes to notice the more subtle details such as the halo style adaptive LED headlights or the 18-inch alloy wheels wrapped around chunky 4 and 2 piston brake calipers clad in blue.

With the need to accommodate the engine longitudinally comes a slightly longer bonnet giving the 1 Series a tougher look than its stubby nosed front paw rivals.

In M Sport guise the 125i scores both exterior and interior upgrades over the basic model. The M Aerodynamics package includes the more sporting front fascia complete with fog lights and high gloss black BMW kidney grille, side skirts and a rear diffuser finished in dark shadow metallic. M badging is present on the front quarterpanels and 17-inch sport alloy wheels take the place of the standard 16-inch units, though ours had the optional 18-inch M light alloy’s fitted. And finally the M sport also comes with M Sport suspension along with high gloss chrome exhaust tips. 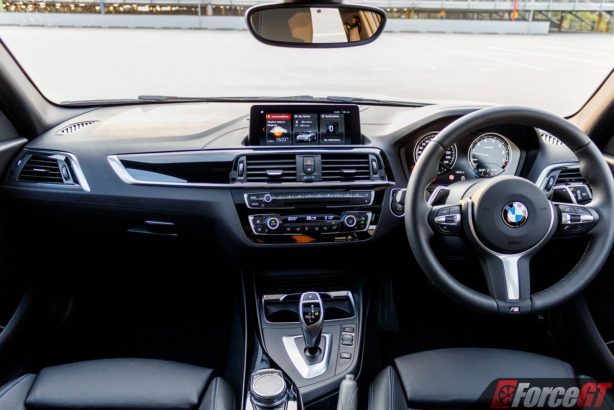 Moving inside will have you surrounded by a typically German high quality interior, our 125i came equipped with the M Sport package that brings Dakota leather with contrasting blue stitching, along with a collection of sports styling inside, most notably the shortened gear lever, driving experience control with SPORT+ mode and both white or orange ambient lighting.

If you’re thinking things look a bit dull inside you’re not alone, thankfully BMW offer a decent selection of other interior styles to jazz things up, including 7 leather/cloth trim options.

Visibility has never been a strong point for this generation of 1 Series thanks to the thick A and C pillars. BMW hasn’t helped the situation when it comes to the rear window with its opaque border restricting things further than needed. 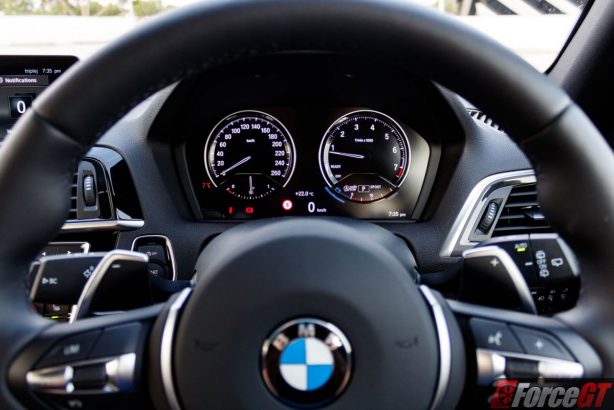 There’s a few odd quirks going on inside that need mentioning. For blind spot monitoring BMW has the lights on the inside of the mirror body which shines brightly into the cabin and can be overpowering at night.

If you’re like me and frequently swap the lane keep assist on or off depending on the situation then you’d want the button for it to be easily accessible, however in the 1 Series its been placed down below the steering wheel to the right, out of eyesight making it a challenge to intuitively reach.

After you’ve parked the car and turned the engine off, the stereo will keep playing until you’ve exited and shut the door, so if you want to keep things quiet you’re forced to adjust the volume every time you exit and then re-enter the car. Thankfully, you can force off everything by pushing the engine start/stop button half-second longer.

Last but not least, after searching and diving into the settings, I could find no option to sync up the dual zone air-con. 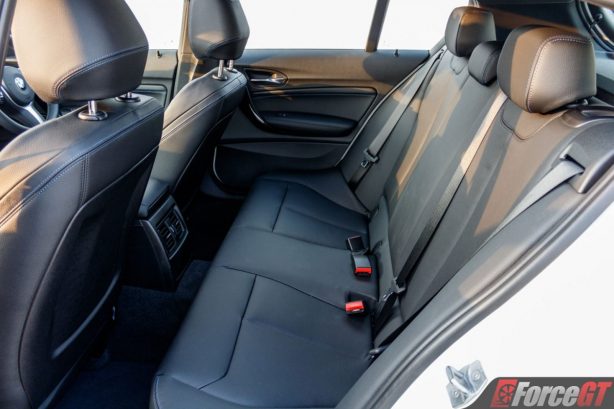 Rear passengers in any hatch are usually going to struggle for room but somehow the 125i manages to provide adequate leg and head room for two people at the back. One caveat of a rear-wheel drive design is the necessity for a driveshaft tunnel and for those rare trips with a fully loaded car, expect a heated round of rock paper scissors for one of the prized window seats to avoid the cramped middle position.

The 60/40 split folding rear seats leave no room for a folding arm rest but you do score ventilation from the rear of the centre console. 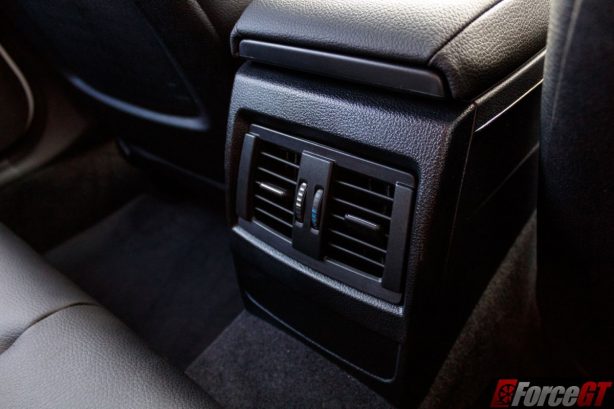 Boot space with the rear seats up comes in at 360 litres which isn’t immense, folding the rear seats brings this up to a much more usable 1,200 litres and thanks to the hatchback design you’ll have no problems loading up and removing larger bulky items into the flat floor. Hidden under the boot lining you’ll find the battery which not only improves weight distribution from its rear placement but also de-clutters the engine bay. 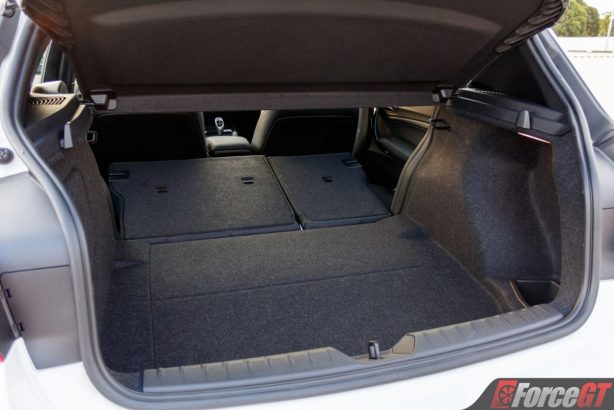 It’s in the engine bay that you’ll find the 2.0-litre 4-cylinder turbo petrol engine that generates a solid 165kW of power at 6,500rpm and 310Nm of torque starting at 1,400rpm holding through to 5,000rpm. And it’s the torque here that matters as it makes the 125i punchy and drivable in every situation. Turbo lag is non-existent with the clever twin-scroll turbocharger and even with the premium levels of power the engine isn’t thirsty. We hit 7.4L/100km for our fuel economy figure against the BMW rated 5.9L/100km, and we did it with a heavy right foot.

Making sure all the power gets to the road falls to the 8-speed Steptronic transmission which is the German way of saying sports automatic. When it comes to speed it can’t compare to a dual clutch system, for an automatic the shifts are fairly quick and when using the paddles combined with complete manual control it’s a real blast working your way through the gears. Ratios are set to make day to day driving economical at the expense of raw performance where a closer set or ratios would work wonders. 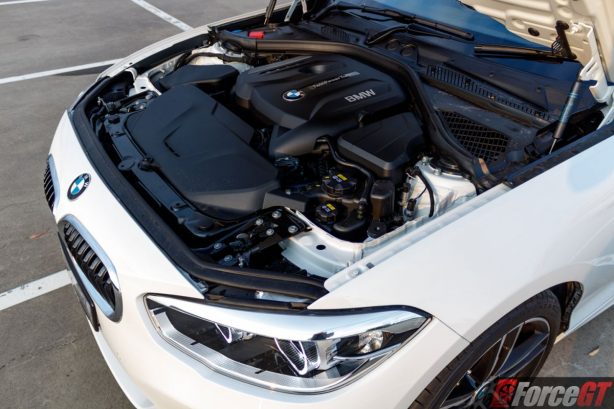 At 1,400kg you wouldn’t call the 125i a heavy car, at least by today’s standards but neither is it on the lighter side, even so BMW has done a great job of managing the weight when it comes to handling. The initial turn in is strong and once the G forces have loaded up everything feels stable and planted. Pushing things harder through the bends has the rear-wheel drive dynamics come into play gradually and controllably leaving you plenty to smile about as you work your way towards the next corner balancing the car with the throttle on the way out.

The weight does hinder rapid direction changes but overall the 125i handles neutrally, the hallmark of a well balanced car. The M Sport suspension firms up the ride for even crisper handling, not to the extent that it’s unlivable day to day either. Comfort mode does exactly what you’d expect and is matched nicely to our rougher than usual Australian roads.

The only let down from the driving experience fell to the brakes with feedback lacking and requiring more force to slow things down than expected. 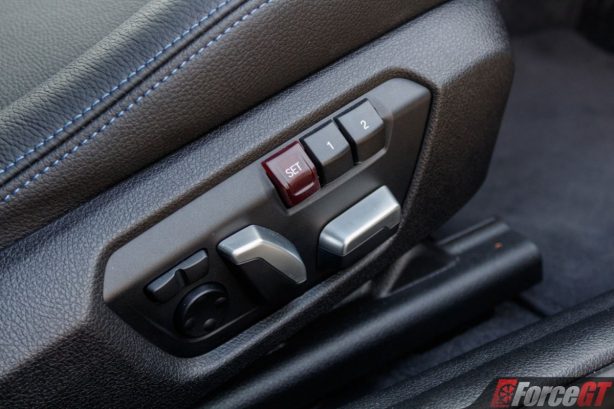 Even though the 1 Series is the smallest model in BMW’s lineup they haven’t skimped on the feature set leaving you with a good selection of kit included as factory standard. Should you need to make a dash from the lights the launch control will no doubt come in handy but for the other 99% of the time when preserving demerit points becomes a priority you’ll be able to take advantage of the road sign recognition which keeps you updated on the current speed limit. Speed limited cruise control makes an appearance and while it’s not as sophisticated as the radar systems it’s easily the next best thing.

Convenience is enhanced with the dusk sensing automatic LED headlights that also electrically level adjust to keep the road illuminated while not blinding those coming towards you. Given that the visibility isn’t the best out the back BMW has made sure to fit both park distance control for front and rear along with the reversing camera. At night the camera produces noticeable image noise however I’ll take that over craning my neck every time. 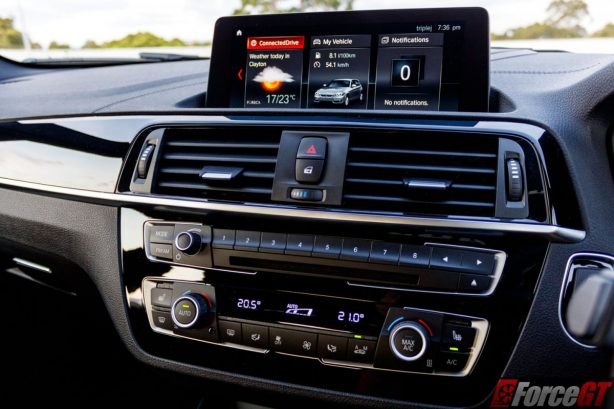 Naturally there’s a huge assortment of safety technology included as well starting with the lane departure warning that vibrates the wheel when crossing the lines unintentionally. Forward collision mitigation at low speed also brings with it forward collision warning and for longer trips the driver attention detection system ensures you’re up to the task.

One of BMW’s greatest strengths against Mercedes and Audi comes down to the way they handle their options list. Unlike the other two, BMW don’t see it as an opportunity to rob you blind. Take the Driver Assistance Pack for example, it’s an additional $750 and brings automated steering parking assistance, radar cruise control and high beam auto dipping headlights to the party and you don’t need to sell your least favourite kidney to afford it.

The 125i we tested came fitted with the Comfort Package which upgrades the front seats to include heating, adjustable lumbar support, electric adjustability, memory settings for the driver and also brings proximity keyless central locking for $2,100. 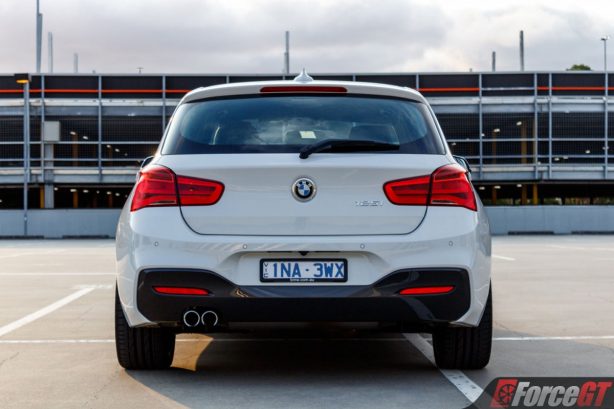 With the 2019 BMW 125i, Munich have somehow managed to fit two cars into the one body. Not only is it an excellent hatchback but hidden in there is a rear-wheel drive machine that purists can get excited about. And best of all, at just a tickle under $50k, it does all this without breaking the bank leaving you with the option to stretch into the more focused and hardcore M140i.