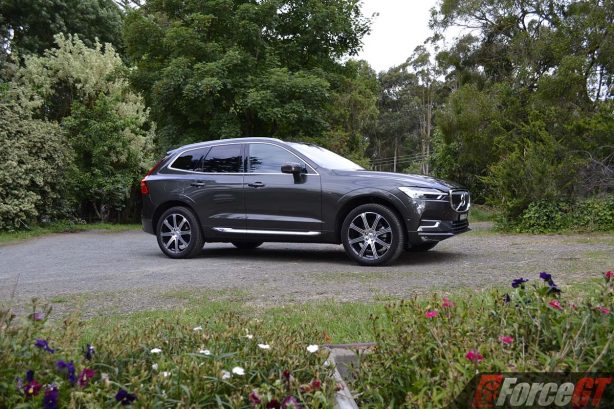 The Volvo XC60 is an important model in the Swede carmaker’s line up. Globally and in Australia, the XC60 is easily the brand’s top selling model and this 2017 model is likely to continue that trend.

Available in three variants in Australia comprising the Momentum, Inscription and sports flavoured R-Design range-topper, the range starts from $59,990 for the D4 Momentum and stretches all the way to $92,990 for the T8 R-Design. Our mid-range T5 Inscription comes in at $69,990; all before on-road costs and options (of which are extensive).

Like its larger sibling, the XC90, the new XC60 is built on Volvo’s latest SPA (Scalable Platform Architecture) modular architecture and comes exclusively with four-cylinder engines only. There are no surprises here for anyone familiar with Volvo’s latest crop of products. The D4 turbo-diesel engine offers 140kW/400Nm and the D5 twin-turbo diesel delivers 173kW/480Nm. Our petrol-powered T5 comes with 187kW/350Nm, while both the turbocharged and supercharged T6 and plug-in hybrid T8 deliver a punchy 235kW/400Nm.

All engines displace no more than 2.0-litre in capacity and are matched with an 8-speed automatic transmission sending drive to all four wheels. 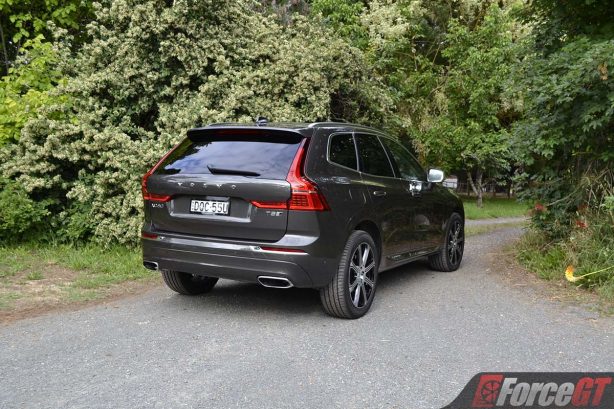 Despite looking like a shrunk down XC90, the five-seat XC60 gains a sportier and more rakish rear end to appeal to the younger crowds. The car is also around 10cm lower than the XC90 and 30cm shorter – thanks to the deletion of the third-row of seats – making it easier to park and lighter to manoeuvre.

At the front, the “hammer thor” daytime running lights continue their journey into the prominent Volvo grille, while the fog and cornering lamps are placed on the lower edges of the front bumper. Seen from the rear view mirror, the XC60 is unmistakably a Volvo.

Along the sides, our Inscription T5 rides on large 20-inch 8-spoke black diamond cut alloy wheels wearing 255/45R20 Michelin Latitude Sport 3 boots as standard. The side sills are now covered by the doors to prevent soiling your designer pants.

Inside, there are no surprises here again as the XC60’s positively modern interior shares most of its switchgear and layout with the XC90 and S90 sedan; from the steering wheel to the front seats and 12.3-inch digital instruments. It’s not a bad thing, as the seats are sumptuously comfortable and the dash ergonomically laid out. The plastics are suitably expensive and soft, and I’m a big fan of the sensuously curved and beautifully finished wood trim across the mid-section of the dash, too. 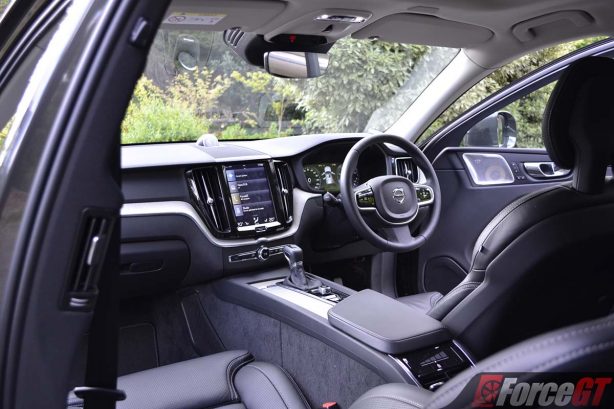 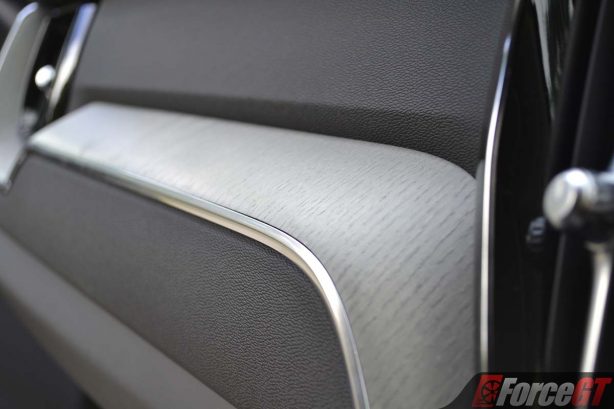 Volvo’s excellent portrait-style infotainment screen – one of the best in the industry with smartphone like responsiveness – is the nerve centre for the majority of functions from aircon to seat bolsters adjustments and is complemented by an efficient voice control system that even allows you to set the aircon temperature.

It is indisputably one of the best cabins in its class today – upmarket, user-friendly and well built.

Of course, there’s still room for improvement. The graphics on the driver’s digital display, while clear and easy to read, isn’t as smooth as some of the XC60’s rivals such as Audi/VW.

The XC60’s sizeable dimensions translate to decent interior space for its occupants with good knee, head and shoulder room both front and back. The rear headrests are well placed and comfortable, and fold down at the touch of a button on the touchscreen to improve its already good all round visibility.

There are also plenty of storage space for odds and ends, including a massive bin under the front centre armrest and generous door bins. 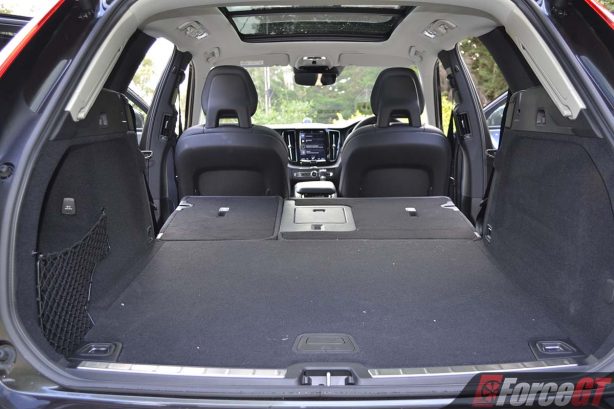 At 505 litres, the XC60’s boot space is slightly smaller than the Audi Q5 (610L) but a smidge larger than the Lexus NX (500L). The rear seats tumble forward easily for a fully flat floor behind the powered tailgate that opens high, leaving a usefully wide opening.

Part of Volvo’s Drive-E family, the engine is smooth with excellent refinement. Its stop/start is also delicate and quick to fire up.

The buttery smooth 8-speed automatic is proficiently tuned, dishing up the right gear most of the time, making the lack of paddle shifters a non-event. As with most sports transmission, putting the drive mode into Sport gives it a shot of adrenalin for spirited drives. 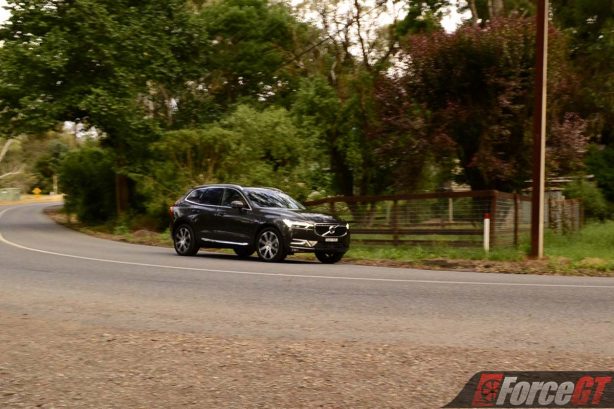 However, don’t expect the XC60 to have the athletic prowess of its German and British counterparts as it’s built for comfort rather than outright sportiness. Nevertheless, our non-air suspended car feels agile and well tight down in most corners and bends, with sticky tyres that claw into the road. With fixed rate dampers, the T5’s ride is firm around town without being jarring.

Its biggest bugbear though, is the wooden brake pedal feel. It lacks initial bite but then clamped down hard on proceedings like an out of control minister. Its steering, while well weighted and precise, isn’t the most communicative, either.

What the XC60 does really well is cocooning its precious cargo in supreme comfort and serenity. It’s quiet at nearly any speeds with hardly any road and wind noise. Even the power windows slow down on their ascent to the top to shut gently like those in a Lexus. 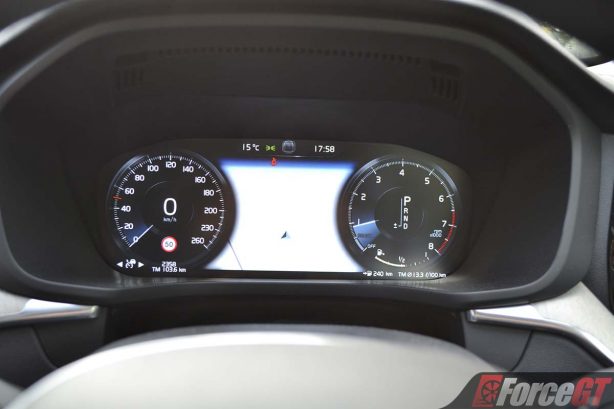 Like the cool kid with the only superhero collector card in the playground, the XC60 trumps its classmates with the most advanced driver assistance system. Its Pilot Assist system gives us a taste of semi-autonomous driving where the car will accelerate, brake and steer itself following the car in front (or visible lane markings) as long as the driver’s hands are on the steering.

With a starting price that undercuts most of its European rivals combined with oodles of style and equipment, the XC60 will not only continue to be Volvo’s top-selling model, but indeed one of the surprise packages of its segment.

The XC60 nails the brief for a modern premium SUV.