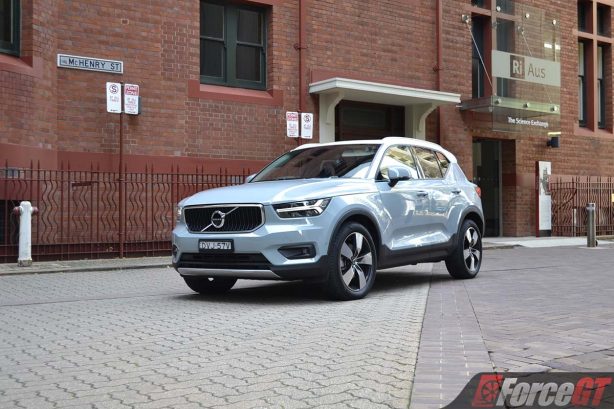 Like Porsche, Volvo has more or less become an SUV company. Once famous for its staid but safe-as-a-brick family wagons, the Swedish brand now sells more XC60 and XC90 SUVs than its sedans and wagons, with SUVs accounting for more than half of all the cars that leaves its showrooms.

It also paints a poignant picture of the changing automotive landscape where SUVs make up increasingly larger proportions of the profitable market segment.

And now with the financial might of Chinese owner, Geely, Volvo’s rapid product renewal continues with the new XC40, entering the premium compact SUV sector that until now, is largely owned by the Germans.

Aimed squarely at the Audi Q3, BMW X1, Mercedes-Benz GLA – and to some extend – the Range Rover Evoque and upcoming Lexus UX, the XC40 is a brand new model from the ground up. 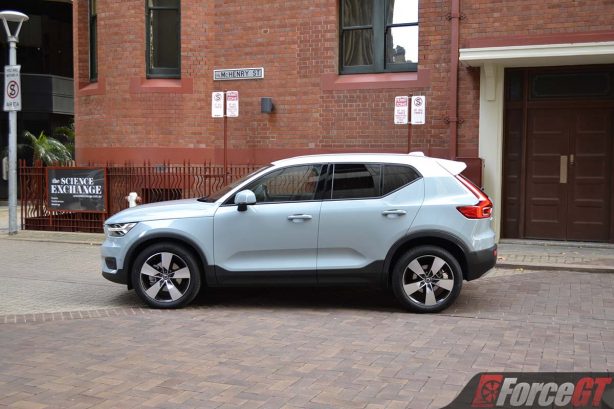 Sitting on Volvo’s new Compact Modular Architecture (CMA), the XC40 is said to be the safest car of its type, with a long list of high-tech driver aids, such as the semi-autonomous Pilot Assist, inherited from more expensive models in its range.

It’s not surprising given Volvo’s history with safety but more refreshing is Volvo’s brave new approach to the car’s design. If you have trouble telling your X1s from your X3s and X5s, the XC40 eschews the cookie cutter approach favoured by its German counterparts.

It may sport the familiar Hammer of Thor headlights to ensure family continuity but the rest of the detailing and overall proportions are pleasingly unique.

Unlike the more formal XC60 and XC90, designers have let their hair down a little and given the XC40 a funkier look with lovely surprise and delight details, such as the little rubber Swedish flag that peeks out from underneath the clamshell bonnet and a throw-back-to-the-60s Amazon Blue paint finish. 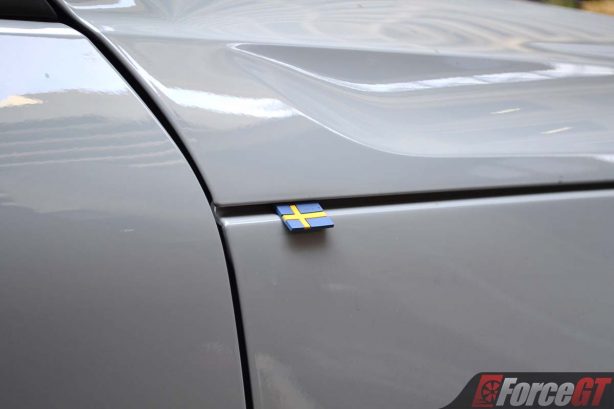 Our Launch Edition test car also comes with a white roof (no cost option) that not only makes the car standout but also infuses an extra dose of youthfulness to the car.

For space-efficiency and costs, the CMA uses a cheaper four-link rear suspension with steel arms and coils, as opposed to the more complicated and expensive five-link with composite leaf spring rear suspension of SPA-based cars. 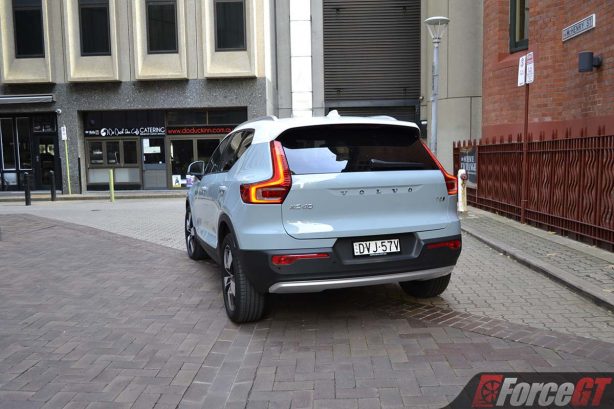 Trim levels are limited to Momentum and R-Design, with a limited number of Launch Edition models with extra kit (see specification table) also on offer initially.

Inside, the XC40 has one of the best interiors in the business, Audi included. Comfortable, luxurious and airy, Volvo has applied the same approach to the XC40’s cabin as its larger and more upmarket SUVs.

Up front, there’s a crisp 12.3-inch digital instrument cluster and tablet-style infotainment screen used across Volvo’s line up. It is flanked by a pair of expensive feeling narrow air vents that click softly when you twist the little knurled knob.

The infotainment screen itself is relatively responsive with easy to navigate menus but the absence of physical buttons for the climate control does make changing temperature a bit of a pain on the move. Happily, you can use voice control to change the temperature easily by asking the Volvo lady to set it to your desired temperature.

Unlike the XC60’s and XC90’s more grown up interiors, the XC40’s has been imbued with youthful exuberance, from the patterned aluminium dash and door trims to the felt lining that rises all the way up from the door bins to encircle the armrest. 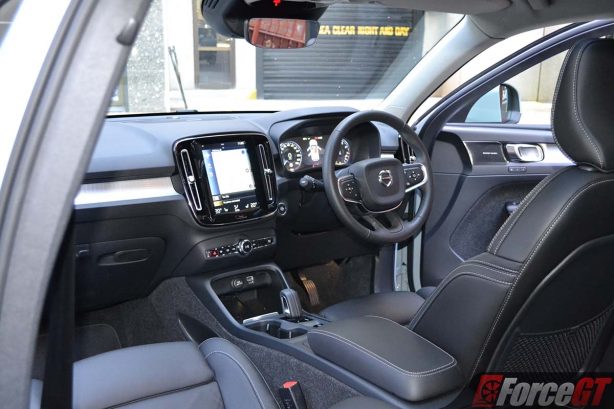 As a sign the XC40 is targeted at younger buyers, there are no less than 3 USB ports in the cabin, along with Apple CarPlay and Android Auto phone mirroring, and a wireless charging pad in front of the stubby gear lever.

There are also neat little features that make life more pleasant such as the auto seat warmers that come on automatically during chilly winter mornings.

Despite its size, head and legroom are good front and back, even with standard panoramic sunroof. The boot aperture is large and opens up to a sizeable 460-litre cargo space, while the 60/40 split rear seats (complete with boot release buttons) fold completely flat for extra usability. There’s also a small storage compartment sandwiched between the space saver spare and the boot floor to hide away valuables. 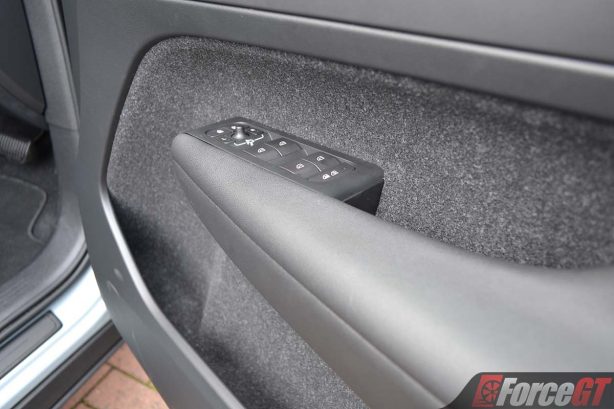 Inside the cabin, the door pockets are deep, long and wide – made possible through the deletion of the speakers where you would normally find them. Instead, the XC40’s Harman Kardon system is equipped with an air-ventilated ‘air woofer’ atop the dashboard to deliver low frequencies to complement the tweeters.

Built quality is suitably premium too, with no squeaks or rattles throughout the test period.

On the move, the XC40 is impressively quiet and refined, with hardly any road or engine noise intruding into the cabin. Its Pilot Assist semi-autonomous feature work as well as any other Volvos to help you keep your car centred and at a safe distance from the vehicle in front, even at urban speeds.

Paired with a smooth shifting eight-speed auto, the T5’s 2.0-litre turbocharged petrol is capable of propelling the SUV from 0-100km/h in 6.4 seconds. It also has good rolling acceleration for an extra dose of confidence when overtaking. 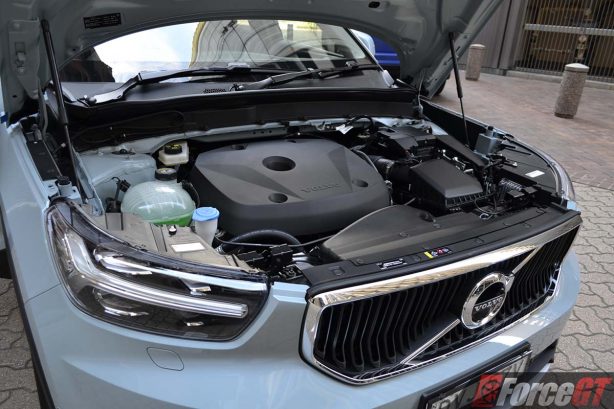 The only criticism about the T5’s otherwise smooth and refined engine is the jerky stop/start system, which takes the shine off somewhat.

Running on 19-inch wheels wrapped in 235/50 R19 tyres and dynamic chassis, our test car strikes a good balance between ride comfort and handling. There’s enough grip, body control and agility to make the XC40 feel sharp and light footed without unsettling the calmness in the cabin.

The fixed rate dampers do a good job of keeping the body level around corners, whilst still supple enough to iron out most of our road pimples. Its steering is comfortably weighted and responsive although light on feedback but crucially, its ride and handling is not what you would expect from a Volvo just a generation ago.

You can harry the XC40 along and it will play ball without flustering. Its chassis is well balanced and the stability control judiciously calibrated.

Practical, safe and comfortable, the XC40 is a classic example of a Volvo but it’s also a new generation of Volvo, one that delivers on the dynamic and handling front.

It’s also rich on visual appeal, interior quality and refinement. The Germans should be afraid.