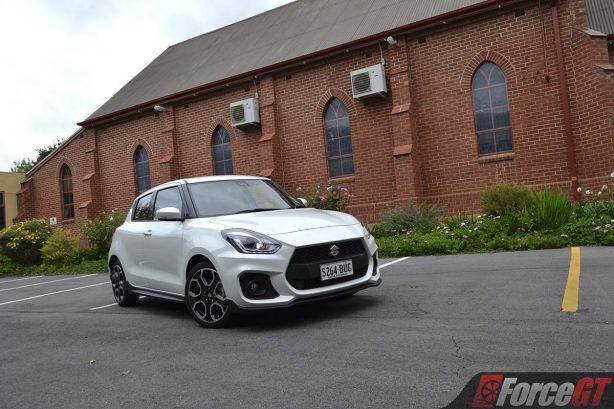 The modest outlay brings a surprisingly long list of standard features, some of which were the domain of luxury cars not so long ago, including LED headlights with adaptive high beam, autonomous emergency braking, lane departure warning, reverse camera and adaptive cruise control with downhill braking. 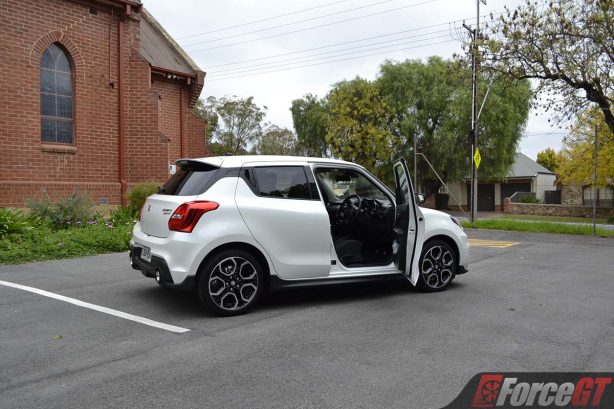 Inside, the cabin looks much like the regular Swift hatchback. You sit a touch high but the sports seats look and feel fittingly purposeful, while the red trim on the dash and doors add a sprinkle of sports flavour to the interior. 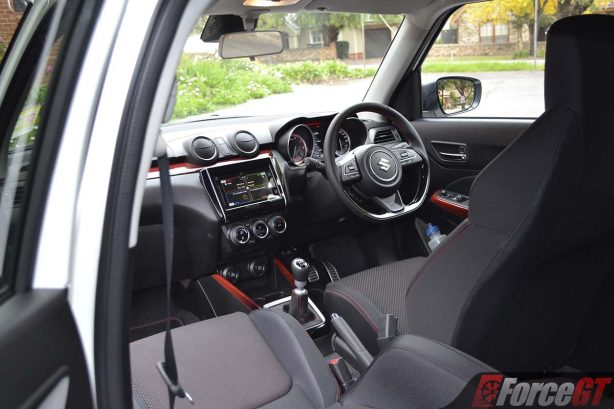 The Swift’s flat-bottomed steering wheel – re-trimmed in perforated leather with red-stitching and satin black inlays – is nice to hold and feels more at home in the Sport. With reach and rake adjusts, it’s easy to find a good driving position, too.

In front of the driver arrayed between the Swift Sport’s red-edged speedometer and rev-counter is a 4.2-inch LCD that not only reveal the usual trip computer information, but G-forces, the turbocharger’s boosting efforts, and the car’s accelerative and braking forces – instant information which used to be the preserve of Subaru WRX’s and Nissan Skylines.

It’s also relatively practical with seating for four, or five at a squeeze. Behind the small hatch, there’s 265-litres of luggage space, expandable to a useful 918 litres with the 60:40 split rear seats folded. 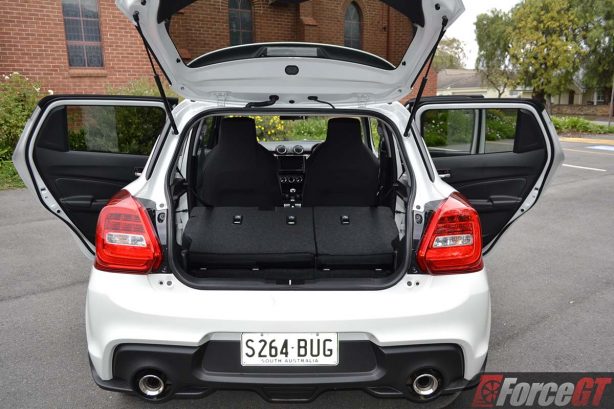 But what really makes the Swift Sport such a delightful bundle of joy is its light footedness combine with the new downsized turbocharged punch.

For a start, despite added equipment and safety arsenal, the new Swift Sport is an amazing 80kg lighter than the superseded model, coming in at a svelte 975kg.

Then, there’s its turbocharged 1.4 BoosterJet engine (shared with the Vitara S Turbo) that produces a humble 103kW, or just 3kW more than the spritely naturally aspirated 1.6 in the outgoing model. However, what makes the difference is its extra 70Nm of additional torque that’s available from 2,500-3,500rpm (now 230Nm). 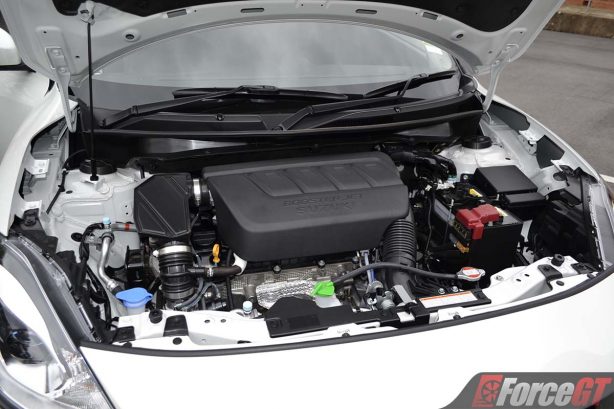 Even on modest throttle opening in the lower gears, the Swift Sport surges forward with the kind of charming verve that reminds you of the original Mini from the 1960s. It’s light, zippy and urges you on with its deceptively strong little engine that sounds almost like a supercharged mill with its distinctive whine. Small turbo engines often suffer noticeable lag, yet this unit is pleasingly linear.

While the precise 6-speed manual is the pick for ultimate driver engagement, the 6-speed automatic with paddle shifters is equally delightful to use. It’s quick and responsive, making easy work for both the daily grind and weekend blast. The only downside is its refusal to hold gears approaching redline.

Getting on the power early can still induce the occasional front wheels scrabble especially in the wet, but there’s never any sign of torque steer that can sometimes blight more powerful front drivers. 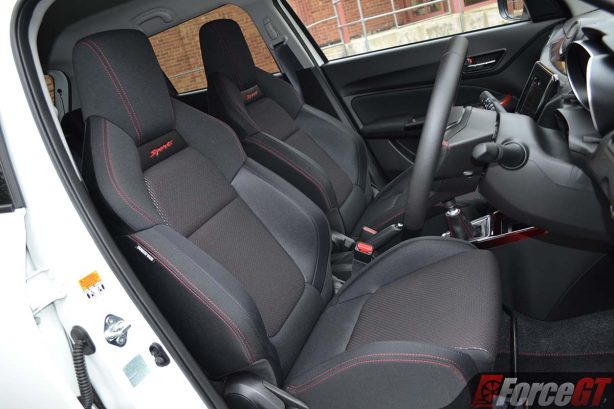 There’s a bit of roll in tight corners and a hint of understeer if you’re overzealous on entry, but with decent grip from the thinnish tyres (195/45), you won’t run the risk of getting intimate with the scrubs. Lift–off mid-corner and the back end can even be encouraged to come round.

Those who like to indulge in a bit of throttle blipping on downshift will be disappointed as the Swift Sport’s throttle response isn’t as crisp as most hot hatches, doing a half-hearted attempt at flaring the revs.

Not only is the Swift Sport cheap to buy, it’s also cheap to run. Despite hard pounding and spending 60 per cent of its time in city traffic, not to mention the lack of auto stop/start tech, the manual returned an acceptable 6.7L/100km.

Meanwhile, the auto returned a slightly disappointing 7.2L/100km against the 6.1L/100km rated combined consumption for both models.

The 2018 Suzuki Swift Sport is a genuinely fun little car that can be enjoyed at real-world speeds without falling foul of the law.

Like cars of its genre, it’s also easy to live with and is now equipped with some sophisticated equipment that will put some of its more expensive rivals to shame.

The fact that Suzuki managed to cramp so much into the car yet manage to lose weight at the same time is testament to the car’s impressive engineering.