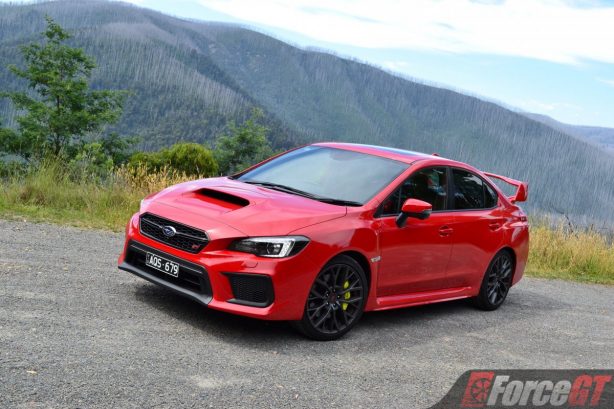 If you now drive a BMW M4 or a Porsche Cayman or even a HSV GTS, there is high chance that you once drove a Subaru WRX STI before you got married and had two kids. If you now drive a WRX STI, it’s likely that you have raced one of the earlier versions in Gran Turismo or Collin McRae Rally at fourth grade. The point is, if you like cars you would have encountered the ‘Rex at least once in your life.

It’s been a performance icon for decades, one that kick started the formula of creating a fast car based on a cooking model. It’s a successful recipe that has since fueled a slew of competitors, most notably its long time arch rival – the Mitsubishi Lancer Evolution.

Now in its fourth-generation, the Subaru no longer has to do battle with the discontinued Mitsubishi Evo, but rather, with more refined, more comfortable European rivals such as the Volkswagen Golf R, Audi S3 and Mercedes-AMG CLA 43.

And to do that, the WRX STI had to tone down its anti-social attitude for a more grown up approach. This meant no more bone-jarring ride or super loud exhaust. The steering is now, well, a steering and not an arm wrestler. Even the bare-bone, plasticky interior had been replaced with something proper. 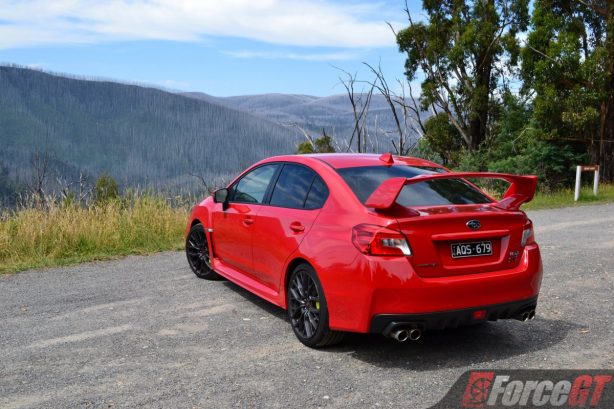 Make no mistake, it still looks as boy racer as ever. That gaping scoop on the bonnet, the towering rear wing, chunky side skirts, pumped up fenders and of course, those obligatory quad exhaust tips, all makes the WRX STI the most aggressive looking performance car on the road, until the new Civic Type R came out, that is.

I like the looks of this thing, especially this new updated version. It looks mean. It makes the competition sedate, boring even. Again, this excludes the Civic Type R, of course. 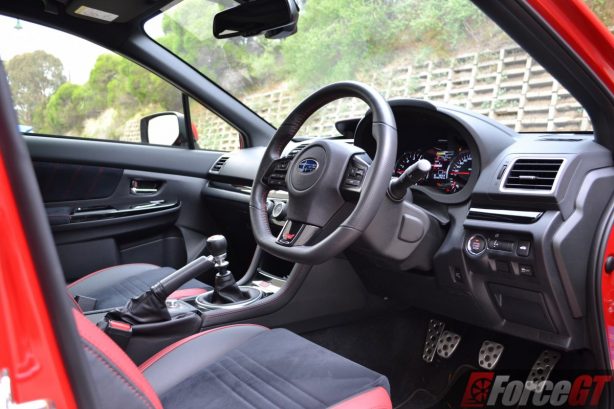 There’s more improvement on the inside, which is already the most cosy WRX STI interior I have ever seen. High gloss black trim materials are now used on the door switch panel, centre console, gear shift surrounds and steering centre bezel. There are new door grips, rear seat armrest with cup holders and a faster opening remote boot. 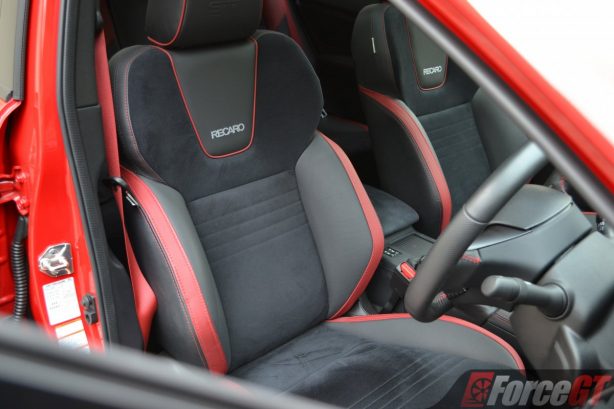 It’s noticeably quieter inside with reduced wind and road noise thanks to thicker door glass, foam filled windscreen header beam and revised door seals. And you might think those larger 19-inch wheels with lower profile tyres give a harsher ride. No, it rides better, in fact. It’s not as plush as the Golf R, but close.

And it’s all down to new suspension tuning on both axles with revised damping and springs all around, plus thicker rear stabilisers for the rear suspension. The WRX STI is now a car you can use every day without needing a visit to the chiropractor every month. But don’t think it’s gone soft. While it’s got a bit more comfort, it’s still very much a rally-bred racer around the bends.

This thing corners and grips like it’s on rails. It has all-wheel drive but unlike most rival systems which are “on-demand”, the Subaru setup is full-time, which means a default 41/59 front to rear torque split under normal driving condition for sure-footed dynamics. There’s the usual bank of electronics and computers that work with three differentials and torque vectoring to send power to where it’s needed most – up to 80% can be directed to either axle.

The new Yokohama tyres provide much more traction over the old Dunlop rubber, allowing a quicker turn in and higher corner entry speed. Pace it has plenty of, just don’t overdrive it or it will understeer, though its progressive nature means you will be given plenty or warning before things go horribly wrong – credit to the WRX STI’s lively and communicative chassis. 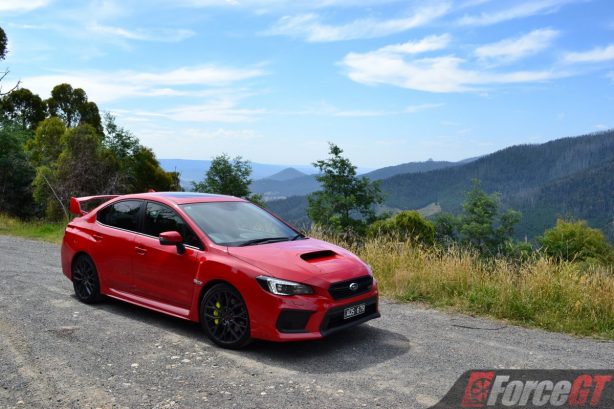 The steering is now slightly lighter than before, improving daily driveability, and, thank goodness, steering rack rattle over mid corner bumps – one of the previous car’s biggest criticisms – has been ironed out considerably but not completely. The tiller, still a hydraulic setup, is brimmed with feedback uncommon in today’s compu-steer system. This is why the WRX STI, despite with all the electronic gizmos that make it go fast, still feels very mechanical, very connected.

Another weak link in the previous model are the brakes and delightfully this, too, has been rectified through stronger, much more fade resistive Brembo monoblock 6-piston calipers at the front and 2-piston calipers at the back, coupled with larger, drilled rotors all around. The calipers are now coated bright yellow, adding to the car’s sporty appearance. 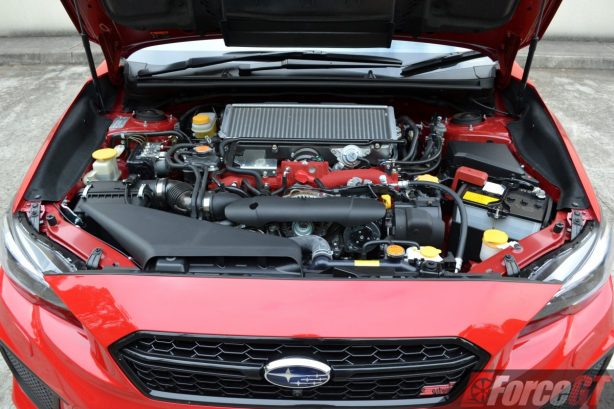 Disappointingly though, the aging 2.5-litre turbocharged boxer-four engine has been left neglected in this update. It still produces a potent 221kW at 6,000rpm, but its 407Nm of torque only peaks at a high 4,000rpm. Good when you are driving at ten tenths. A bit lackluster when you are not, which is 90% of the time if you are not Tommi Mäkinen.

To rip the most out of the WRX STI, you have to drive it hard, real hard, which means keeping the flat-four boiling at above 4k rpm. And when you do, it’s a thoroughly engaging and involving drive. It packs enormous punch when the boost comes on, the short throw six-speed manual gearbox feels great and the pedal position allows for easy heel-and-toe.

In other words, this car is fantastic at the twisties and a ripper around the track. Nought to 100km/h is dealt with in about 5 seconds and the quarter mile done in just over 13 seconds. More to that, it’s how well everything is tied together and how much it involves you the driver when you’re hammering it around. 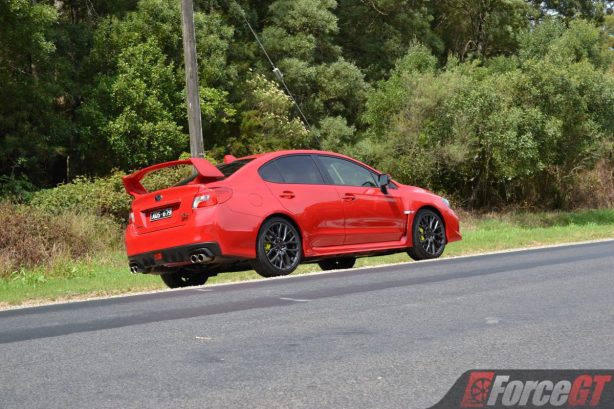 With the lack of direct injection, fuel economy isn’t great. Its strict RON 98 diet and 6 monthly servicing interval mean running cost can be quite high. You’re an enthusiast so none of these matters I know. But at $57,690 plus on-road costs, the top-spec WRX STI Spec.R tested here is the most expensive car in its class (a base model can be had for about $8k less but you lose a few luxuries), eclipsing the Golf R DSG ($55,490) and Ford Focus RS Limited Edition ($56,990). It’s also sitting uncomfortably close to the BMW M140i ($59,990).

That being said, the WRX STI remains an icon and carries with it unrivaled heritage. No doubt it has matured gracefully in areas such as ride quality and interior comfort (welcomingly), but in terms of the way it drives, it’s still the same ‘Rex that we grew up with and used to know – uncompromising, fast and a bucket load of fun.