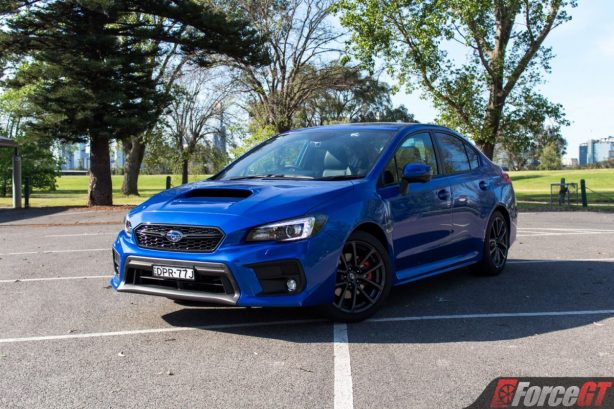 The soundscape emanating from Australian roads just wouldn’t be the same without the familiar grunty burble left behind by Subaru’s infamous boxer engines. The most recognisable and prominent being the heart of multiple generations of WRX, initially starting off as a hotted up Impreza and ultimately parting ways. The WRX and its hardcore STI stablemate now stand as the highest performing models offered by Subaru.

The previous model was a big hit and Subaru has refined the package for this updated 2017 model while keeping it priced within the reach of us mere mortals. The base spec WRX starts off at a tempting $39,240 (excluding on-road costs) while the WRX Premium tips the scales at $45,640 excluding ORCs. 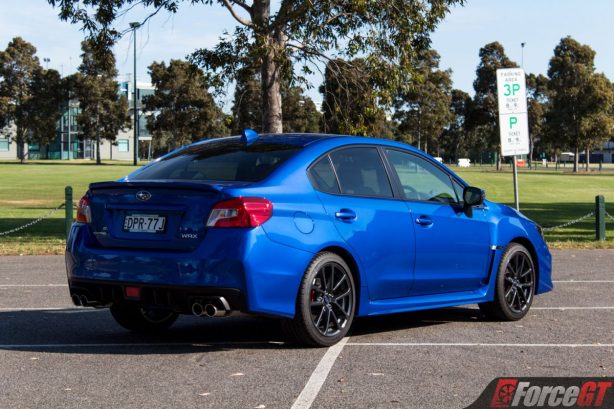 The overall look has been updated with a fresh front fascia, lights and grille that combine with the bonnet scoop to give the WRX a very menacing presence from the front. There’s no denying that it’s a good looking bit of kit from head and side on. Everything becomes far more civilised at the rear where the boot spoiler lip and quad exhaust tips drop hints of performance potential to those lingering behind.

Subaru has focused their efforts on creating a higher class interior for the WRX Premium (tested here). There’s perforated and padded leather in all the right places, faux carbon trim highlights up on the dash and drilled metal pedals where the action happens.

The larger 5.9-inch dash mounted multi-function display replaces the old 4.3-inch unit and is the biggest update to the new interior, bringing with it a plethora of functions to keep drivers up to date on all things boost related. The primary function of the display is as a boost meter though it can also be cycled through to display drivetrain information along with range and fuel economy figures by using the menu switch. Push the same button and you’ll gain a valuable front facing camera to assist with front parking and view blind spots to the left, great to tuck right into a spot but also to avoid scratching up the front bumper lip on low obstacles. 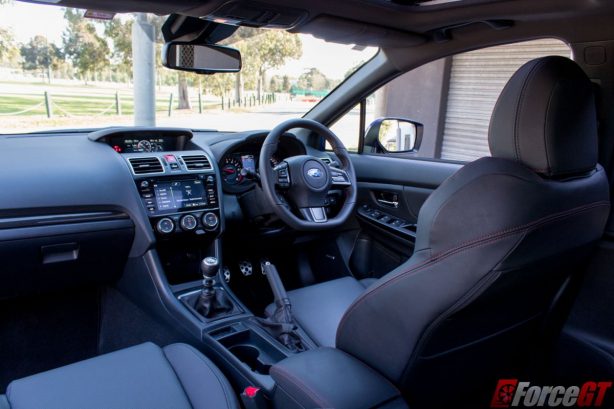 Thanks to the sunroof forcing a lower roofline, head space is limited in the front, those planning on hitting the track with a helmet would be better off with the base spec model.

The WRX may have grown larger in recent years but it doesn’t feel like it’s designed for larger drivers, particularly those wearing wide shoes. They’ll clip on the clutch pedal when going on and off the foot rest which became tedious real fast, swapping out to some slimmer shoes solved the problem but the issues don’t stop there. Firm brakes appear to be a Subaru trait and the WRX suffers the same issue as the BRZ, you can’t heel and toe easily as the brake pedal depth isn’t enough to get the job done.

Thankfully the seats provided are up to spec, they strike a good balance between comfort and holding ability with the convenience to have two memory profiles available at the push of a button and endless electronic adjustability. 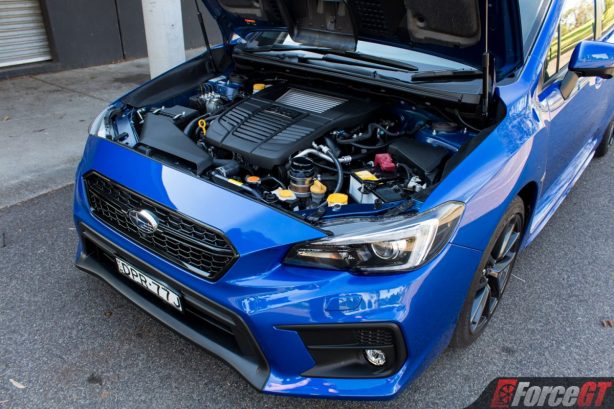 The drivetrain in the WRX remains unchanged, you get the same 197kW and 350Nm as in the previous model from the 2.0-litre direct injected turbocharged boxer 4-cylinder engine. As a daily driver with the occasional blast on a rewarding road, it’s a well suited power level but take it to the track and you’ll quickly be begging for more, most likely in the form of STI power.

Below 2,700rpm you can’t expect a whole lot of action but once the boost comes on you get that familiar turbo rush that holds power all the way to redline. On boost you can forget about fine throttle control as it’s close to all or nothing, a trait that completely suits the all-wheel drive WRX. Point and shoot is the nature of the beast.

Adding to the fun is the soundtrack that can only be had in a turbocharged car, wastegate, boost whistle and spooling turbos make the WRX a real pleasure to experience. More impressive yet is that even with a good slog of heavy footed driving, the WRX still managed to eke out an economy rating of 10.9L/100km against the official rating of 9.2L/100km. Keep it off boost and the official figure could become a reality, that’s if you can resist the allure of power that boost provides. A full tank should net you roughly 450km of mixed driving so you’ll be fuelling up more frequently than desired. 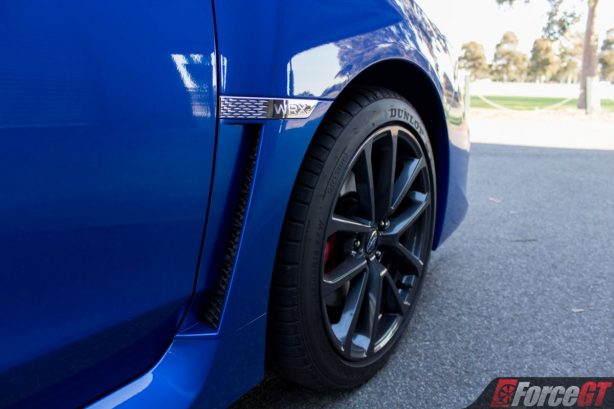 If I could crack a whip and force the Subaru engineers to improve one thing on the WRX it’d be the shift feel. I was expecting a smooth metallic and mechanical feeling gearbox but instead was stuck with a notchy feeling shift between gears. The WRX has a habit of the revs hanging between 1st and 2nd so it’s a real challenge to make the transition smoothly without getting thrown forward in the middle of shifts. The throw is short and stubby and the clutch, while a tad heavy, isn’t going to be a substitute for leg day at the gym. It’s also an extremely forgiving clutch to use with a wide slip zone that becomes second nature almost instantly.

Braking performance on the WRX is agreeable if you don’t ask too much of it, when you really start to wash off the speed the lack of feel and endurance does become apparent which again can be solved by stepping up to the more track orientated STI. 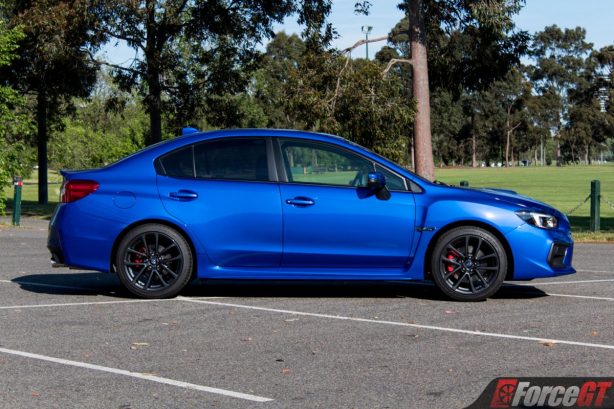 The WRX really is a jack of all trades, it’s large enough with a decent sized boot to be used day to day and packs the power needed to get up and sprint when pushed. The concession for all that practicality is of course the weight, clocking in with a kerb weight of 1476kg the latest WRX is no featherweight boxer.

Even so, the handling and apparent nimbleness of the WRX is easily its ace in the deck. The turn in is strong and confident with the rest of the car settling into the corner quickly ready for minor adjustments. There’s very little body roll and the ride is firm to boot yet not spine breaking on ordinary roads, the end result is a very neutral handling car with high grip limits that’s predictable and easy to drive quick. It’s a safe bet that 90% of drivers will never reach the grip limits in a WRX on the road but it’s nice to know the capability is there. 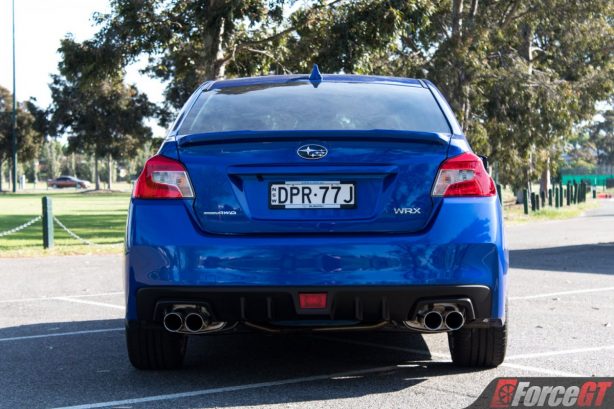 There’s a $6,400 price gap between the WRX and the WRX Premium which you’re sure to have separation anxiety with so what do you get for your money in the way of features? Right off the bat you get a higher spec leather finished interior and seats with 8-way power adjustment and dual memory settings so the overall look and feel is worthy of the Premium name. Next up is the 7-inch LCD touchscreen infotainment system that blasts out amplified tunes through 8 harman kardon speakers and subwoofer. Everything sounds mighty coming from that setup and it’s almost criminal that Subaru didn’t fit DAB+ digital radio to maximise the audio potential.

All models now gain the steering responsive LED headlights with LED daytime running lights and they pierce through the darkness lighting up everything their path.

If you ignore the price the Subaru WRX is a great car, factor it in and the Rex achieves excellence. It does so much right and so little wrong, it’s practical, relatively comfortable, packed with performance and economically approachable. Those looking at a Subaru BRZ or top spec Toyota 86 would do well to stretch their budget that tiny bit further for a whole lot more performance and practicality to boot.