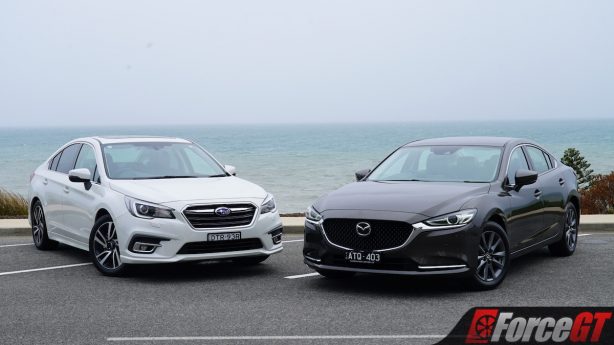 Let’s say you’re after a somewhat sporty, somewhat premium sedan that’s nice to drive, nice to look at, is brimming with kit, won’t break the bank to keep it on the road, and costs under $37,000.

If that’s your situation, there’s not really a lot out there to choose from. You could have a Toyota Camry, which isn’t overly sporty (but definitely not boring) or the Hyundai Sonata Premium which is too expensive. And while the new German-made Holden Commodore could be had in a lower trim level for this sort of money, it’s now a liftback – not a sedan.

Realistically then, that leaves you with only two viable options for what you’d actually want to have if you were in this situation. One is the Subaru Liberty 2.5i Premium, and the other is the Mazda6 Touring – both of which are fresh off the back of facelifts for the 2018 model year that sharpen their looks and their pricing while adding more kit into the mix. 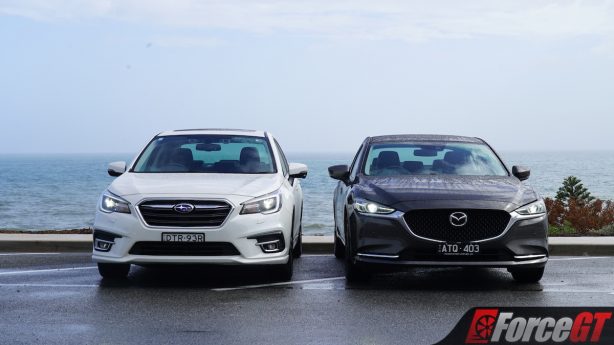 A mere $50 splits the difference between these two, with the Liberty costing $36,640 and the Mazda6 running for $36,690, both as tested and before on-road costs, but there are a staggering number of other similarities between the two cars other than price as well.

Both have 2.5-litre naturally aspirated four-cylinder engines, both are made in Japan by independent manufacturers, and just one kilogram splits their overall masses. Look at the overall dimensions of the two cars and the numbers are pretty similar there too.

But which one of these two is the best value sedan for under $37,000? That’s what we’re here to get to the bottom of. 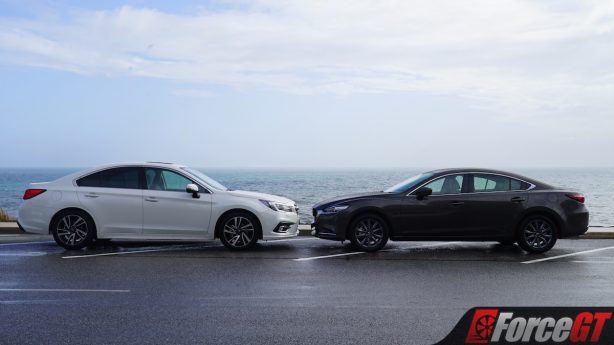 If you’re opting for a sedan rather than an SUV these days, it’s clear you have a sense of style, but irrespective of what sort of car you’re buying, first impressions count.

For exterior styling, it was the Mazda that had an ever-so-slight edge for us at first glance as it has some truly gorgeous lines. Even before this recent refresh, it was probably the best-looking car in the class, but with the recent tweaks it’s now looking better than ever. 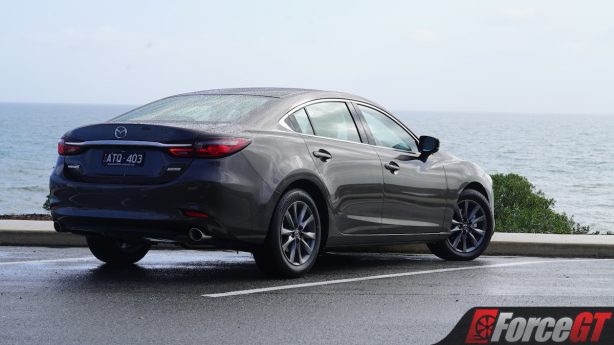 It really has some gorgeous lines to it, the Mazda6, with the front wheel arches being a particular standout. The revised fascia on the car looks incredibly classy too, and the way the current Mazda design language has been applied to it doesn’t look forced.

However, the body-colour 17-inch wheels it’s rolling on do look a bit, well, cheap, if I’m being honest. It dulls the overall design just a tad, and they look a lot smaller than they actually are due to the fat sidewalls on the tyres.

It’s completely the other way around with the Subaru’s styling – while we love the go-fast 18-inch diamond cut wheels, the rest of the design – while certainly smartened up enough compared to before – just looks a bit dull. There’s nothing wrong with it being conservatively styled, and that will no doubt appeal to many, but it just looks a bit old hat next to the Mazda.

On the inside, the Mazda continues to lead the charge, with a modern and minimalist design that just looks gorgeous. The materials throughout the interior feel a bit more plush than in the Subaru as well, with far more give to them and a lack of harder, cheaper plastics.

While the Subaru falls behind here as well, it’s still a perfectly nice place to be. While the materials aren’t amazing, they are still very good, and the way it’s all bolted together feels very high quality. The infotainment screen has particularly good quality to it too, although it and the abundance of piano black plastic around it have a tendency to smudge up easily.

Rather comprehensively then, you can chalk up the first point to the Mazda.

The Subaru easily claws it back in the second round by simply offering higher levels of standard equipment, although there’s not all that much splitting the two. 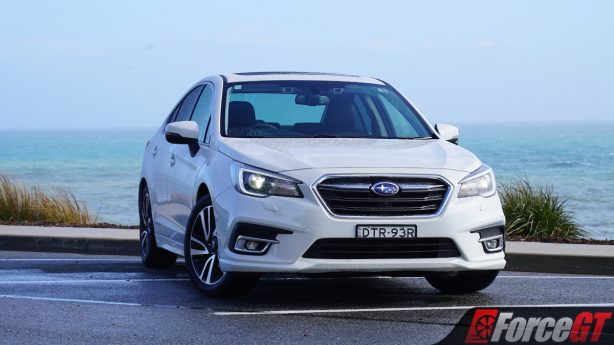 A sunroof, heated seats, Apple CarPlay and Android Auto, active cornering headlights, and a digital speedometer are the main luxuries you’ll notice the Liberty offering over the Mazda6, although the latter does at least attempt to claw back with a head-up display in lieu of a digital speedo and a brand-name Bose stereo.

While smartphone integration will be added to the Mazda MZD Connect infotainment system later in the year, with retrofitting available to those who already have a Mazda or buy one before then, we have to judge it based off what we see here and now.

Otherwise, the two really are neck and neck in all that they offer as standard. Leather upholstery, satellite navigation and eight-inch touchscreens, adaptive cruise control, and all the safety kit you can imagine.

This one’s pretty simple though – the Subaru offers more as standard, so if having more kit than you know what to do with is what you’re after, it’s easily the better bet. 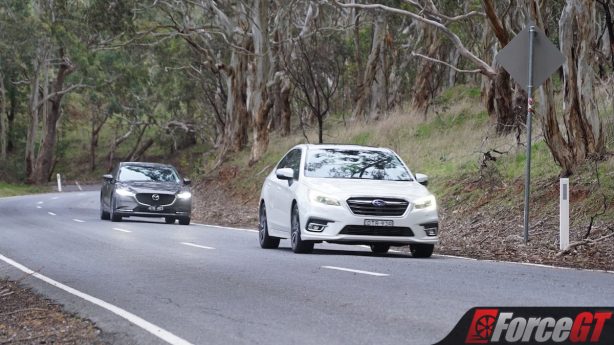 While both cars here have naturally aspirated four-cylinder engines displacing 2.5-litres, the similarities end there as both are radically different under the skin.

In the case of the Mazda, it takes a more conventional approach, with a transversely-mounted direct injection inline-four – producing 140kW and 252Nm – mated to a six-speed torque converter automatic that sends power to the front wheels alone.

The Subaru, however, has a horizontally-opposed boxer engine mounted longitudinally, which is paired, rather unfortunately, to a CVT automatic with a manual mode that simulates seven stepped ratios. While it does offer all-wheel drive, something the Mazda does not, its 129kW and 235Nm power and torque outputs mean it struggles to keep up with the Mazda in a straight line. Furthermore, it also utilises old-school and less efficient multi-point fuel injection.

Both employ different methods of trying to cut down on fuel use, further differentiating the two drivetrains. For the Mazda, it uses a new cylinder deactivation system that will run on just two cylinders when on the cruise. It’s completely undetectable, as was Mazda’s aim, and you can see when it stops firing half its cylinders by watching the instant fuel consumption meter drop.

The Subaru, on the other hand, relies on its CVT keeping the revs low when driving in a more relaxed manner to save on fuel. Both employ idle start-stop systems that can be easily turned off, although they do default to being on when you start the car back up.

Both cars certainly have their different merits behind the wheel, although there’s not much to split them until you begin to really push them hard. 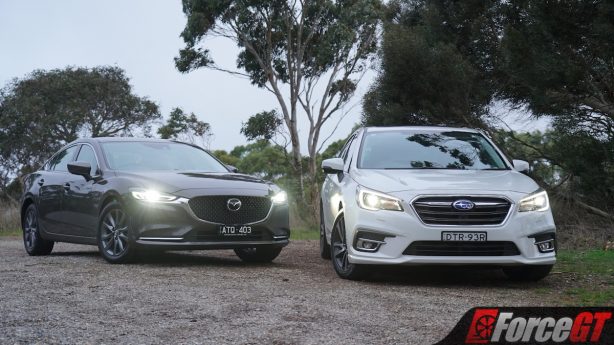 For the majority of driving you’d be doing – that is to say, around town and not wringing its neck – the Subaru edges ahead of the Mazda by offering a surprisingly supple ride, although that’s not to say the Mazda isn’t comfortable as well. While CVTs are all annoying, Subaru offers one of, if not the most refined CVTs on the market, as it does smooth things out during the daily commute.

But even around town, the Subaru simply struggles with power when pitted against the Mazda. Combine the tall, economy-focused placebo gears of the CVT with the gutless engine that hides what power it has to offer way up above 4,000rpm and progress is far from brisk.

The Mazda, on the other hand, while no powerhouse, offers enough pep and a smartly geared transmission to provide a drive that is definitely aimed more towards the real drivers out there.

While its engine is a tad noisier than the Subaru’s, it more than makes up for it with more refined power delivery. It’s surprisingly thrilling once you chuck it into Sport and flick around the paddles, as the great throttle response and ability to keep it right up at the top of the rev range – thanks to offering a true manual mode that won’t automatically upshift before you want it to – means you can easily access and squeeze out all that it has to give.

Through the bends, the chassis of both cars are right on the money for offering pleasant dynamics, but the Subaru’s fantastic Symmetrical All-Wheel Drive system means you can put down the power earlier on the exit from a corner than you can in the front-drive Mazda. 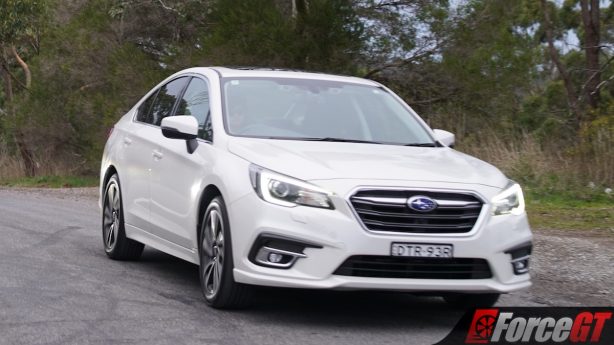 Both feel well-sorted in the suspension department though – there’s a tad of body roll through the bends, which is fine, and lateral grip is good from both, although push them as hard as we did during our testing and you’ll expose some understeer in both.

Aside from the unsurprising understeer, there is some rack rattle detectable in the Subaru when you encounter the nasty mid-corner bumps littered along the edges of Adelaide Hills roads we put these two through their paces on. The Mazda, while feeling a bit more robust in that respect, simply can’t carry as much pace into the turns as the Subaru can with its all-paw tractability.

Both are incredibly close in this department, and while we really like the way both cars drive, we’d be going straight for the Mazda if we had to choose only one. While the Subaru is, unsurprisingly, a marvel in the bends, the lethargic engine and soul-sucking CVT are outclassed by the Mazda’s far more thrilling drivetrain that simply pulls harder on the straights. 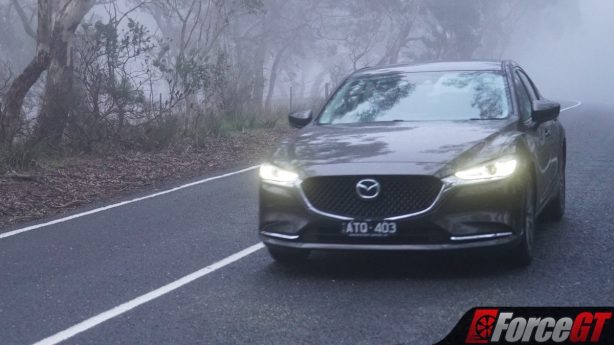 It was at this point that I was originally going to criticise both carmakers for only offering three year warranties, but just a couple of weeks before posting this and a few days after our testing concluded, Mazda upped its warranty to a far more competitive five year term with no mileage cap for cars sold from August 1, 2018 onwards.

It was about time Mazda showed the confidence they should have in the cars they sell, so thankfully they’ve come to the party on that, meaning that the onus is now on Subaru to bump up its warranty duration too to remain competitive.

Further making this the Mazda’s round wholly, it has less frequent twelve month service intervals and significantly lower costs for each visit to the dealership.

The Mazda was also noticeably better on fuel, using precisely 9.1L/100km over our 190km test loop, a figure the trip computer actually overestimated by half a litre. The Subaru, by comparison, used 10.2L/100km, no thanks in part to having permanent all-wheel drive and old-school multi-point fuel injection. 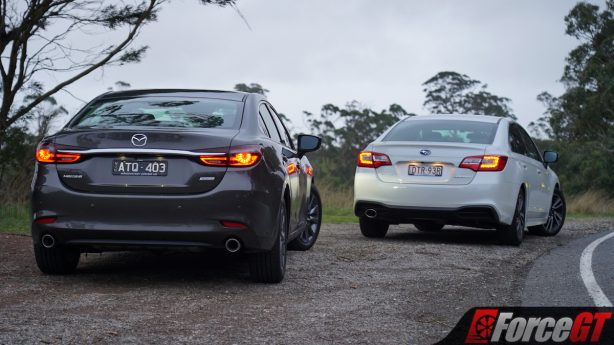 It’s been a very, very close competition with little to split these two. Clearly, there is a lot going for both of these cars, and both do what they do very well.

The Subaru Liberty 2.5i Premium continues to prove just how great a feature the company’s signature Symmetrical All-Wheel Drive system is, and it’s one of the best in the business. It also offers plenty of kit for the money, is put together with typical Subaru build quality, and delivers a particularly comfortable ride too.

But it’s the Mazda6 Touring with its classier looks, upmarket interior design and materials, and its far punchier engine and better straight line performance that make it the winner this time around.

Although missing a few luxuries the Liberty offered, the extra $50 for the Mazda6 is money well spent, in our opinion, especially as the cheaper running costs and recently extended five year warranty sweetens the deal further.

And if you want – or need – all-paw traction, the Subaru is really the only option at this price point and in this segment of the market, meaning the Mazda can’t beat it there, it’s still the Mazda6 that we would always keep coming back to. 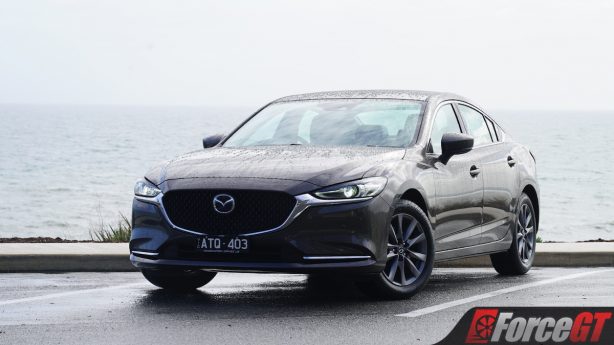