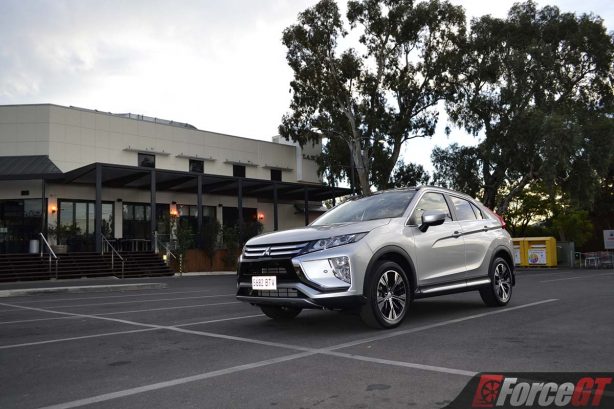 Mitsubishi’s first all-new model in as many years is off to a promising start with plenty of showroom glitz and technology to keep millennials happy. Arriving in what is now described as a ‘coupe SUV’, or a less expensive variation on the genre established by the BMW X6, it slots between the smaller ASX and bigger Outlander in Mitsubishi’s product hierarchy.

And it is perhaps the sloping roofline that Mitsubishi deems fit to resurrect the Eclipse badge which used to adorn one of its low-slung coupes from a distant past. While the two-door Eclipse coupe was never sold in Australia, its name still obviously has enough marketing clout to be resurrected for Mitsubishi’s latest SUV.

The Eclipse Cross mingles in the style conscious arena populated by the smart Mazda CX-3 and extroverted Toyota C-HR, although it’s bigger than both. 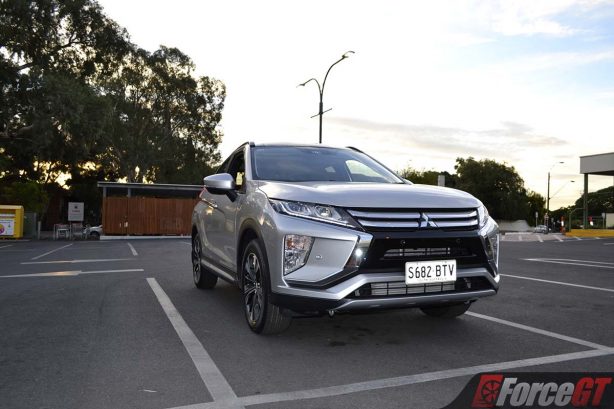 There is a distinctive Lexus influence in its design, especially in the front quarter view with its chiselled front fascia and slender LED headlights. Viewed from the sides, the rakish rear hatch and sharp 18-inch wheels imbue the car with an athletic stance not often seen on mainstream crossovers.

Around the back, the LED taillights are connected by a continuous strip of LED brake light that gives the car a wider stance, while the rear windscreen wiper is cleverly hidden inside the roof-mounted spoiler.

Inside, the dashboard has a cockpit-style layout not dissimilar to that of the Lexus NX, with its protruding air-con controls and tablet-like 7.0-inch display atop which supports Apple CarPlay and Android Auto. It’s intuitive to use and combines the attributes of Lexus’ touchpad and Audi’s MMI system, making it easier to use than the Lexus system. The icons are large and organised in a row. You control the volume by swiping up or down with two fingers while swiping left or right scrolls through the pages. 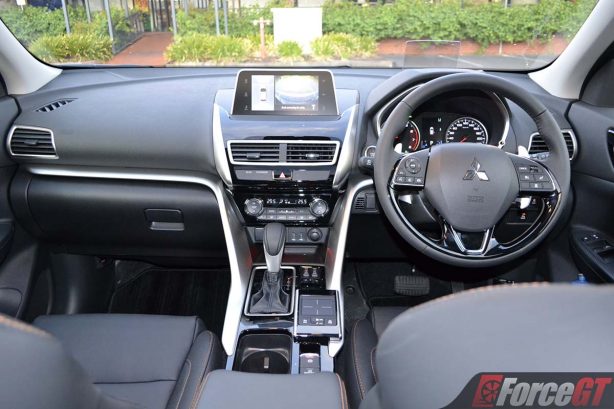 The Exceed model also comes with a fancy head-up display although it’s the cheaper flip-up type that only displays digital speedo, navigation and cruise control information, and nothing else.

You sit on the Eclipse as oppose to sitting in it due to the high-mounted front seats. Nevertheless, they are nicely supportive and provide great toe room for back seat passengers. Rear occupants also get decent legroom as long as those in the front aren’t too lengthy. However, the plunging roofline means you noggin might get a knocking when entering.

On a brighter note, all round visibility is good and interior finish is the best so far from Mitsubishi, with padded dashboard and front door cards.

At 341 litres, the Eclipse’s boot space is 77 litres larger than the CX-3’s and but trails the CH-R’s by 36 litres. The 60/40-split rear seats fold almost completely flat to expand on its capacity to make trips to the hardware store a little less strenuous. 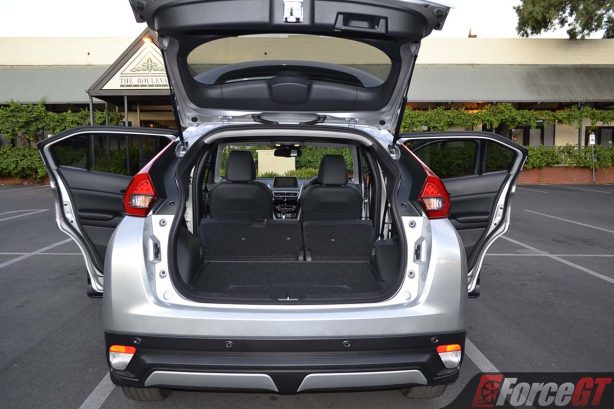 Don’t let the sporty aesthetics or its Eclipse middle name lead you too far astray though, as the Eclipse Cross is no sports car.

Its all-new 1.5-litre turbocharged four-cylinder petrol engine is a sweet little unit, refined and responsive off the mark; it puts out 110kW of power and 250Nm of torque from 2000 – 3500rpm. It’s also perfectly happy on a diet of regular unleaded (tested average: 8.7L/100km).

But matched with a continuously variable transmission, it masks the engine’s sharpness and torque rather than showcasing them. It’s less of an issue cruising lazily around town but any attempts to pick up pace will bring along typical CVT slurred revs.

Intriguingly, the Eclipse Cross is fitted with a pair of satisfying big paddle shifters lifted straight from the grave of the now dead Lancer EVO (RIP old friend, we miss you!). But don’t let that fool you, either, as flicking through the eight artificial ratios doesn’t bring much more forward thrust, as the engine revs rise lazily. 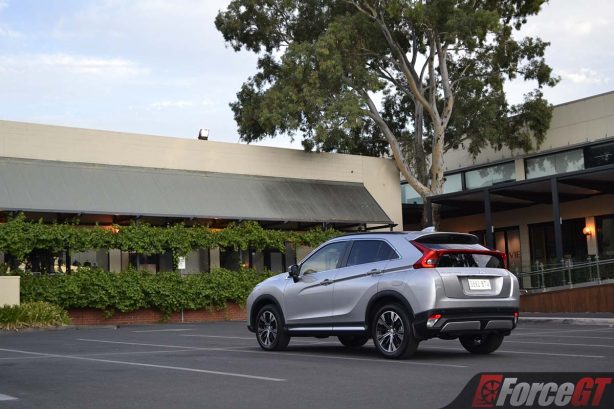 The Eclipse Cross also doesn’t like being thrown hard into corners, as its compliant suspension protests with higher than ideal vertical body movement, reducing its handling composure.

However, like a few other manufacturers, there’s no built-in sat-nav. Instead, drivers have to rely on their smartphone (mirrored on screen via Apple CarPlay or Android Auto) to guide them to their destination.

One area that Mitsubishi tends to excel in is running costs. The Eclipse Cross only needs to visit the dealer once every 12 months or 15,000km, with costs ranging from $300 for the first service, and $400 for subsequent ones.

There’s plenty to like about the new Mitsubishi Eclipse Cross, just not the way it handles, as its name might suggests.

With plenty of kit on board and the best interior presentation so far from Mitsubishi, the Eclipse Cross might just be what the young and upwardly mobile buyer is after, as long as driving is not a priority.